A Watered Down Port 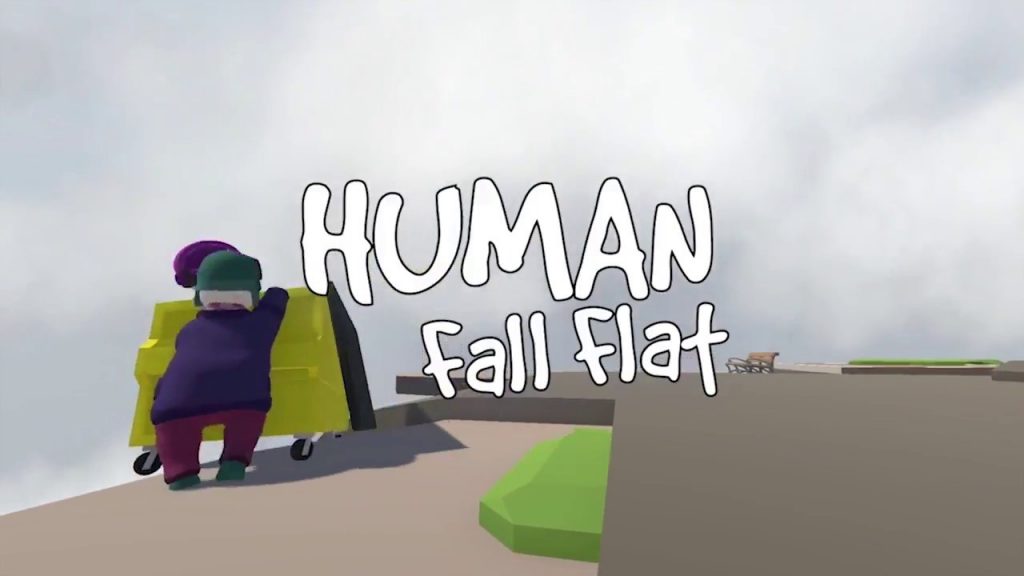 When we reviewed the PC version of Human: Fall Flat in 2016, we couldn’t help be charmed by the boneless, gelatin-like character named Bob that we clumsily navigated through several thought-provoking and creative environments. The goofy controls mixed with the semi-difficult puzzles lead to some gut-busting bouts of laughter, and also a little frustration. At the time Human: Fall Flat was new, so there were no helpful guides or YouTube walkthroughs to offer us hints during the game’s many head-scratching moments. Here we are, over a year later, and a quick Google search will yield several “how to’s” to help nudge gamers in the right direction.  With that being said, when developer No Brakes Games announced that a Switch version of the game was on the way, we thought reviewing Human: Fall Flat was going to be a hell of a lot easier.  But, as anyone will quickly find out, knowing how to tackle said puzzles is only a small fraction of the battle. The biggest slice of the difficulty pie has to do with the goofy controls and poor camera. 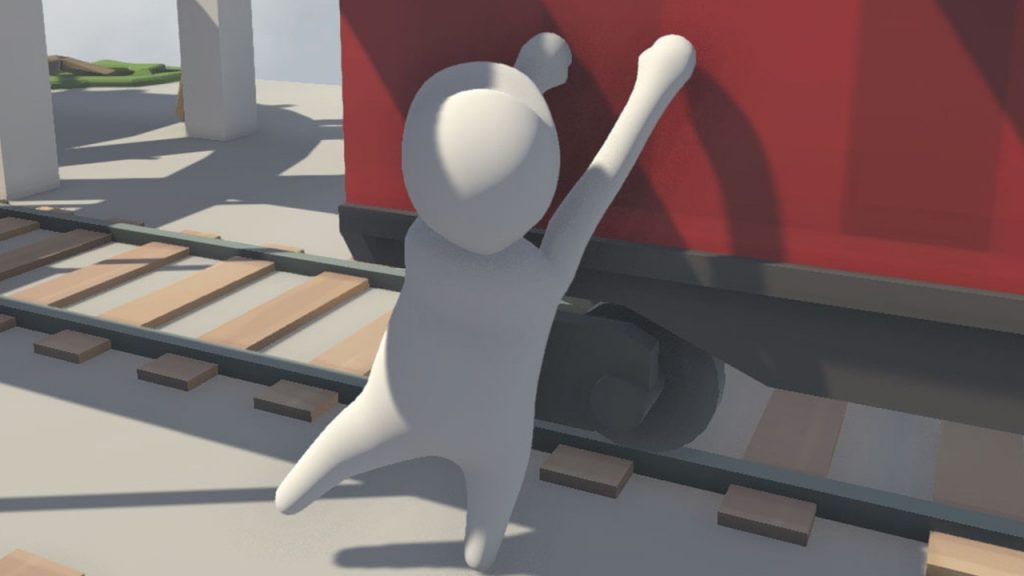 For those that are new to Human: Fall Flat, let me explain what is going on here. Your character, Bob, can best be described as a drunken blob of gelatin with arms and legs. It’s your job to get Bob from point A to point B. In between the two points are switches and puzzles and obstacles that are basic in nature, but since you are a blob, their simplicity isn’t as it seems.

Controlling Bob can be compared to controlling a character in Double Fine’s Gang Beasts. Similar to that game, Bob’s left and right arms are controlled by the left and right triggers. Pressing both trigger buttons at once will make Bob grab whatever is in front of him with both hands. But, unlike Gang Beasts, both arms can’t be fully controlled individually. In most cases, one arm always mimics the other. If you want the arms to raise, you need to look up.  Want them to touch the ground? You got it- You need to look down.  See what I’m getting at? I’m sure you can see how this can get crazy.

Other than pressing and lifting items with Bob’s hands, another big aspect of the game is getting Bob to jump and pull himself up onto platforms. Since nothing is easy when it comes to Human: Fall Flat’s controls, a simple jump turns into a heart-pounding test of patience. In order to jump and pull Bob up onto a platform, you must hold down both trigger buttons while looking up. The next step is to jump and pray that Bob grabs the edge of the ledge. One millimeter below the edge and you’ll end up falling and having to try all over again. If you did manage to grab the edge you must now look down to pull Bob up. If you thought platforming in the Uncharted games was too easy, I suggest giving Human: Fall Flat a go.

You Gotta Have Focus 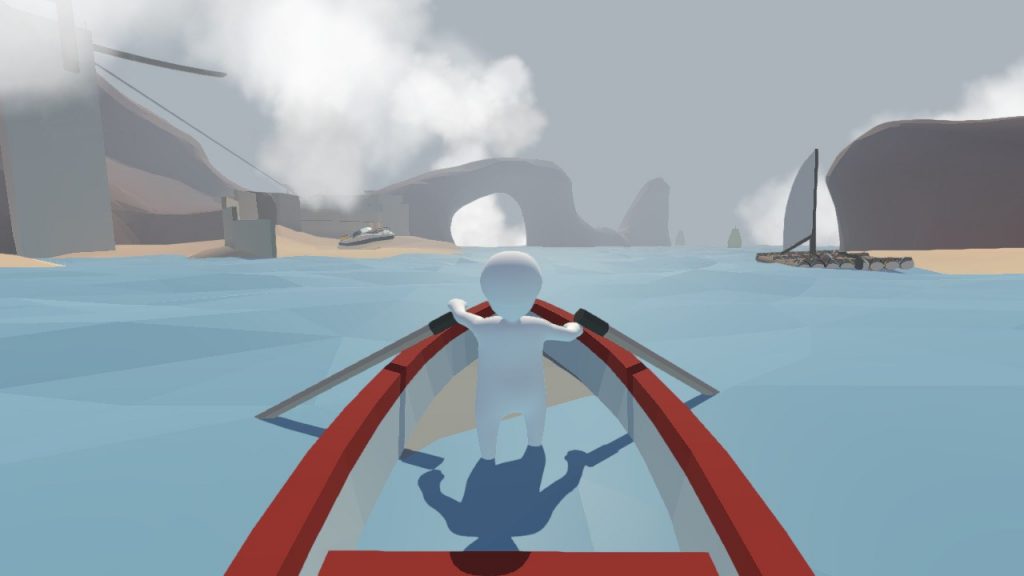 When not battling with the convoluted controls (yes, I know the controls are supposed to be awkward) you’ll be in the midst of one of the most epic battles in video game history – The battle with Human: Fall Flat’s camera. During the game’s most intense sequences, the camera is simply too close to Bob. When a game requires you to look up to climb, the camera should not be less than a foot away from the character. This causes clipping and confusion. I had to take several breaks from this game due to the horrid camera issues.

This was especially bad during a sequence where Bob must move a boat off of a beach and into the water. Pulling the boat left and right would cause the camera to shift with Bob, which lead to ample amounts of clipping and not knowing where he was located. I felt like throwing my controller through the wall by the time I finally got the boat in the water. After exhaling and puffing my chest I was ready to conquer the next obstacle, but before I could enjoy my accomplishment, the boat drifted too far away and Bob ended up drowning.  The boat was back on the beach and I had to do it all over again. My 30 minutes of camera frustration was for nothing, and in no way did I ever feel as though I was having fun. These moments happen far too often throughout the game. 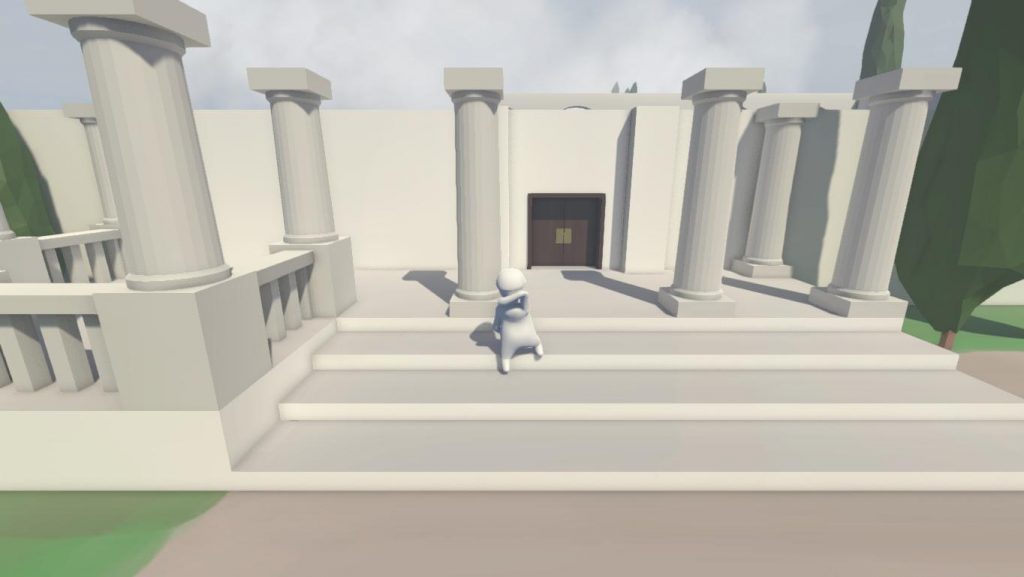 That being said, I did have a few “Oh, wow” moments. If you think you can do something in the environment, you probably can. There is a sequence in the game where several shipping containers are scattered all over a dock. The walkway to access the next area is clearly visible, but it’s obviously out of reach. It took some major work, but I was able to control a crane and hook large chains to one of the containers to eventually move it to a part of the dock where I could jump off of it and climb up onto the walkway. At first, I thought this was impossible and that the developers wouldn’t expect gamers to attempt this, but it actually worked! These moments are really exhilarating.  But, in midst of actually having some fun with the Switch version of Human: Fall Flat, in the back of my head I just couldn’t help feeling like something was missing. Actually, the more I played the Switch version, the more I realized that a lot was missing. 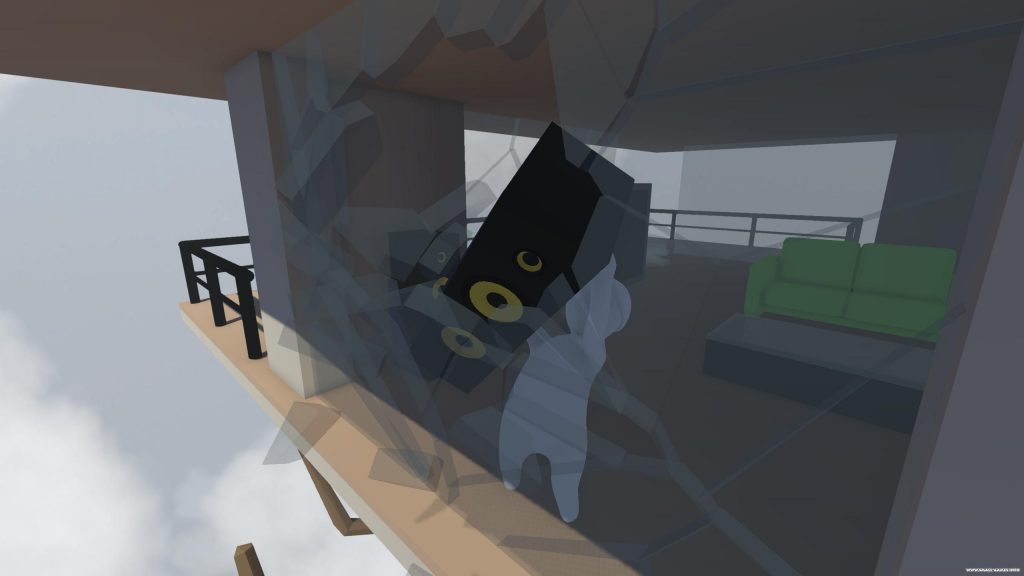 If you’ve previously played (or watched) the PC version of Human: Fall Flat, you’ll notice a hefty amount of the character customization options have been removed. The most notable omission is the “draw” option. No longer can gamers draw on their character. Yes, the option to give them bare asses or penises that droop down past their knees has been removed. This is disappointing but expected seeing that this is on the Switch. Thankfully, there are still a handful of different outfits and props you can deck out your character with, but having the draw option taken away removes a lot of fun and creativity.

While many gamers may not care about having the ability to draw a penis on their character, many will no doubt be disappointed in the removal of what I believe to be the PC game’s main draw – having several friends play alongside you. The Switch version of Human: Fall Flat limits you to playing with only one friend, and what is even worse is that it completely removes online play. Additionally, if a buddy wants to join in your game, they must have their own set of joy cons or a Pro Controller. The ease of removing the Switch’s joy cons to jump into a co-op match is not available. Furthermore, co-op is only available via split screen, which means you and your friend better have some good vision if you plan on playing on the go with the Switch undocked.

Hopefully, some online functionality gets added down the line because two player couch co-op just doesn’t cut it. Playing with a handful of friends makes the difficult controls and bad camera laughable…but in a good way.  It’s more fun when you and your buddies are dealing with all these problems together. While having a single friend play alongside of you may be fun at first, having several friends working together just makes everything more bearable.

Help, I’ve fallen and I can’t get up!

It’s hard to recommend the Switch version of Human: Fall Flat because it just doesn’t feel complete. The Steam version is the same price and it includes more character customization and a solid online multiplayer mode. The Switch’s two-player split screen mode will offer some fun, but only to those that haven’t experienced playing with eight friends over Steam. The more friends that experience the sloppy controls and erratic camera the better. They’re laughing at you…and with you.

Full disclosure: This review is based on a Switch review copy of Human: Fall Flat given to HeyPoorPlayer by the publisher.

A Bold Experiment That’s Not Quite Ready The Steam Deck is a lot of things. A bold experiment. My favorite new way to play games. Constantly changing. A dream…