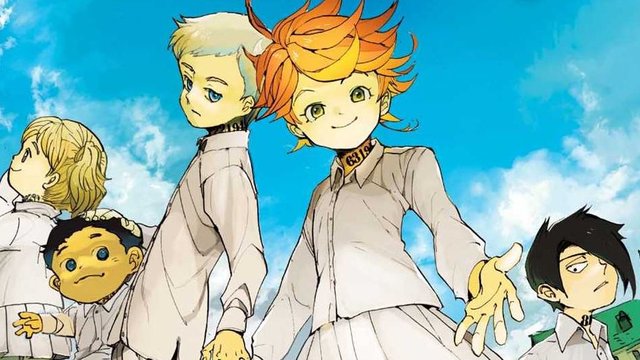 Notice: While we don’t dive into specific developments following the 1st chapter, given how it drives the plot, we summarize the shocking events of the manga’s beginning in full. Those who want to jump into The Promised Neverland completely unaware may want to skip this review. A quick summary for such readers: it’s really, really good. Like, really.

A decade ago, Death Note captured the manga-reading world with its grim visuals and cat-vs-mouse narrative, featuring gods of death and killer notebooks used to purge the world of criminals. It was unlike anything Japanese manga anthology Weekly Shonen Jump had published before, what with its questions of morality (“is it okay to kill criminals?”) captivating its brooding teen audience and inspiring impassioned debates every which way on the Internet. As anyone reading VIZ Media’s digital localization of said anthology knows, however, Death Note may finally have met its match in The Promised Neverland, and what a coincidence — it also just happens to be penned by an artist/writer duo. Debuting last year by writer Kaiu Shirai and artist Posuka Demizu, The Promised Neverland is a thriller twice as dark and infinitely more heart-wrenching, owing to Shirai’s masterful storytelling and Demizu’s bewitching art.

Emma, Ray and Norman are three 11-year-old geniuses living at the Grace Field House Orphanage, raised under the care of a woman they know only as Mom. Grace Field is a children’s paradise, filled with food, warm beds and laughter filling its fields and halls. It may be a gated orphanage, yet that doesn’t stop the children from dreaming of the outside world: the books filling the library tell of animals, of trains and trucks, and of clothes differing from their dull white uniforms. But this neverland doesn’t last forever: before they reach the age of 12, children are assigned new foster homes and leave Grace Field for good.

Before The Promised Neverland‘s beginning, such departures were the envy of every Grace Field orphan. But on the night six-year-old Conny makes an early farewell, Emma and Norman make a horrifying discovery: Grace Field is not an orphanage paradise, but a farm raising human children for consumption by demons, and their provider is none other than Mom. Teaming up with the loner Ray, they realize without any adults to rely on and death awaiting their stay, there is only one option: escape.

With children’s lives at stake, it’s all too easy to get caught up in the plight of The Promised Neverland‘s doe-eyed heroes. Following Chapter 1’s tragic revelation, Shirai hits the brakes on exposition and, as a good suspense-thriller should, lets the characters’ detective work set the stage. We see this as the pieces to Grace Field’s puzzle gradually click into place for the three children: how can Mom find any lost kids so easily, for instance? What’s the secret behind the haphazard shipping schedule? Are there more to certain daily rituals than they appear? Some answers are more obvious than others  — typically the ones revolving around the more unusual activities — but none are more underutilized than the other, and excel in setting the stakes for Emma’s group. 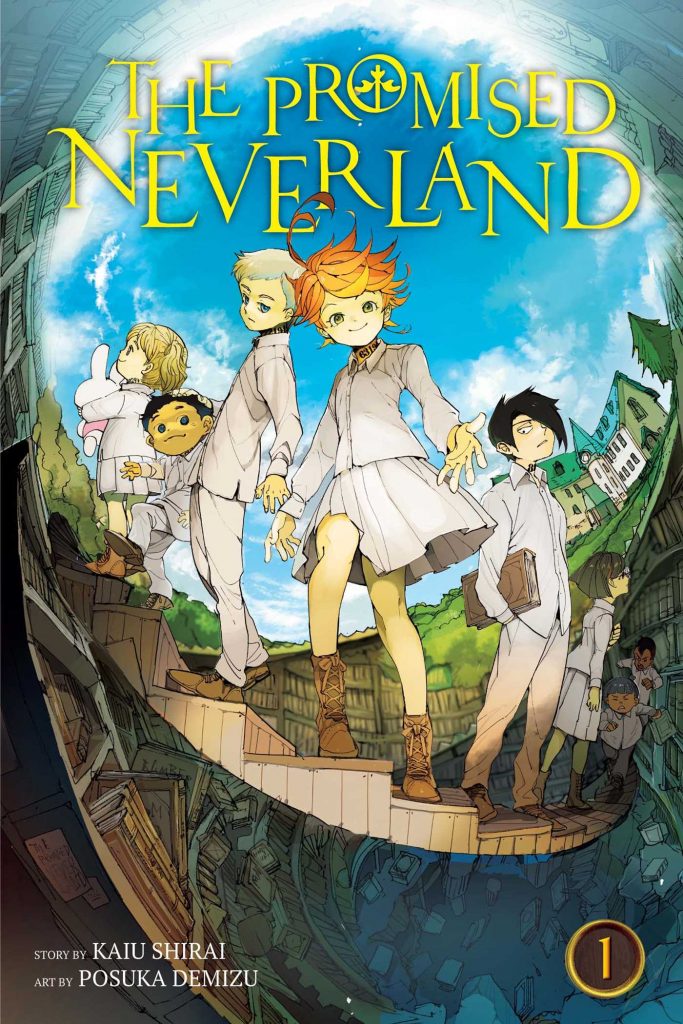 This is owed to the tension-filled cat-and-mouse play between Emma/Norman/Ray and Mom. While the trio may be geniuses, it goes without saying three kids fumbling in the dark for answers are ill-equipped to deal with a cold-hearted grown-up, and they certainly take their licks along the way. And with kids being what they are, it’s inevitable squabbling strains their plans: while Emma and Norman take the idealistic approach in including all the children for their escape, Ray desires a crueler, if not more practical, solution; that is, to leave the rest of their friends behind. It’s in the ensuing scene we recognize their roles: Emma, the active idealist who aims for selfless goals; Ray, a cynic born from loneliness and wants to achieve via pragmatic (albeit not selfish) means; and Norman, the more perceptive idealist that binds the group together.

Regardless, readers caught up with the current VIZ chapters already know The Promised Neverland continually subverts our expectations, and this is hardly more true than one chapter’s twist involving Mom, which already throws more questions into the mix. I dare not spoil it for newcomers, but let’s just say Shirai’s author note at the volume’s beginning — specifically the one about his mentioning of art foreshadowing — may hold a clue. And for veterans who’ve already read the digital chapters, Demizu includes short-story sketches in-between chapters for this first volume, most notably a heart-breaking tale involving Conny.

Speaking of the art, as fascinating as Shirai’s suspense-work is, it’s hard to imagine that working as it does without Posuka Demizu. A newcomer to the weekly manga format, his artwork for the cover alone is incredible, the warm colors and fish-eye lens perspective operating with a hypnosis I’ve never witnessed before in the medium. Of course, the actual manga isn’t half-bad either: barring Ray, the children are sugary-sweet with squishy proportions, making The Promised Neverland all the more tragic in their infectious smiles and terror-stricken faces. Such composition is what drives the tension, especially in the face-off between Emma and Mom, wherein the latter’s pupils grow blank as she coolly observes any chinks in Emma’s facade.

Even more than the stone-cold stares of Mom, however, I am especially frightened by Demizu’s demons: all are immaculately-detailed nightmares, particularly in how their bony, wiry claws greet the reader in their first appearances. While their appearances are sparse in this volume, their two-eyed countenances and delicate grips are enough to provide a terrifying contrast: we can’t quite observe their emotions via facial expressions, but their careful handling of “merchandise,” plants, and tea is enough to imply their intelligence (were it not for their ability to speak, anyway).

In summary, The Promised Neverland is the most successfully unorthodox Jump series in some time. Suspension of disbelief may be required for the children’s intuition, but that hardly takes away from the cunning twists and turns revealed in the first volume, least of all the stunning artwork. Harrowing, but not entirely hopeless, The Promised Neverland should be in reach of every manga reader’s radar.

Blood on the dance floor.   Hotline Miami made quite a name for itself when it slaughtered its way onto the PC, Playstation 3, and Playstation Vita back in…