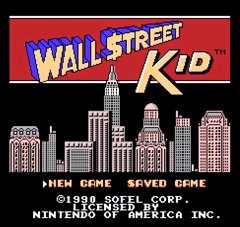 What happens when the Casino Kid grew up and got a real job? His distant uncle, Benedict, died and left a will promising him $600 billion if he could just make the old man’s dying wishes come true. No, this isn’t the latest installment of everyone’s least believable soap opera, it’s the plot of Wall Street Kid for the Nintendo Entertainment System.

Enjoy the thrill of using an Apple Macintosh SE to choose your investments and plan your day! Click on a flower to summon your needy potential spouse! Use a weird exercise tool for 4 hours a day to stay fit and not miss work due to illness! Head down to the bank to be insulted and take out a high-interest loan! If you’re the kind of completionist junkie that plays fantasy stock exchanges and just can’t let a video game win, read on! 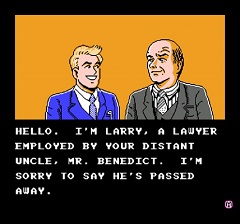 OK, we’re only assuming that this is the same Kid from the casino due to his looks and the fact that SOFEL published the two games not a year apart, but the rest of it is straight out of the cutscenes and instruction manual for the 1998 NES title. Wall Street Kid gives you half a million dollars and tasks you with making a corpse’s dream life your own. To be fair, even millennials see a car, a dog and a house as signs of adulthood. Maybe Uncle Bennie was ahead of his time. Of course, he also wanted a yacht and the family castle.

The graphics are passable, consisting mainly of blocky 8-bit portraits of your apartment and acquaintances. The gameplay revolves around taking your initial half a million dollars and turning it into enough cash to get all the things Bennie most desired. You do this by buying and selling stocks in blocks of 1,000, and the menu is thankfully intuitive and easy to use. It’d be better if you weren’t surrounded by people trying to rip you off. 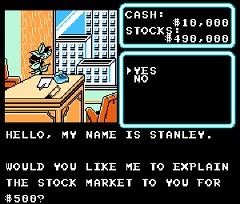 On your first day on the job, you’ll get a call from your Crafty Consultant, actual in-game title by the way, who will give you a tutorial for the low price of $500. With this type of on-cartridge DLC, the game truly was ahead of its time. Not long after that, you’ll hear from a realtor who can’t wait to sell you a new home. Ralph, the Regal Realtor (I assume it’s a royal title), calls back every week for a few weeks to remind you that the home costs a million dollars and that you fail at life (and it’s game over) if you don’t buy it. Luckily, the cost of the house is fixed and a month’s worth of transactions can get you there.

Except good ol’ Uncle Bennie set you up with a hot blonde who has no job and expensive tastes. After one week on the job, she’s begging you for a $500 or $1,000 puppy. But wait … have I mentioned the scaling difficulty yet? Wall Street Kid is a Nintendo-hard title, after all. If you’ve actually had a great run in the opening week of the game, the dogs she’s interested in cost twice as much! This pattern continues as you look into buying a yacht, but now Priscila, the Prissy Prima Donna, needs a nice car. 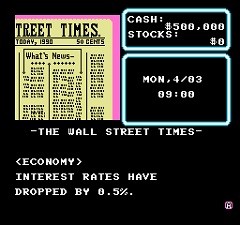 So your life revolves around making money to give to people whose titles indicate they exist to screw you over. The Bogus Boatsalesman, the Cranky Car Dealer and the Ruthless Banker all stop by to make your life difficult. The humor of the game is painfully dry and feels like a decent translation of very bad writing. As a result, Characters attempt to drop quips that fall flat and can even be quite insulting. They rarely manage to be intentionally funny, usually just delivering their lines in a way that makes you want to back out of the office slowly. Some modern sims play this type of banter to absurd levels and make it humorous. In Wall Street Kid, it’s just incredibly awkward.

By the time you learn about the castle, the few simple tracks of the game’s music will be permanently stuck in your head and you’ll probably be assigning alliterative aliases to everyone around you. Success in Wall Street Kid is rewarded by moving the goalposts, but if you keep your wits about you, invest wisely and use the most of your time, you too can live the life Uncle Bennie wishes he still had. 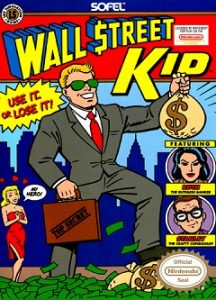 Oh, and those annoying alliterative acquaintances — they’ll come begging to join you if you win. That alone is enough to make players who relish a challenge tear through Wall Street Kid. Everyone else should give this title a wide berth, especially if they enjoy story, action or anything more exciting than stock tickers. Wall Street Kid is mercifully short, provided you make the right choices, but lacks any real replay value.

Bradley Robbins
Bradley Robbins is an old-school gamer who never lost touch with the gaming scene. From his first ColecoVision to the PS4 Pro, he's always had a love affair with RPG, strategy and fighting titles. With over a decade of experience as a copywriter and blogger, "Scratchpad Brad" is back in the writing game after a few too many years in a cubicle slaving away on a team of overnight search zombies, for real!

Show us your fancy footwork, kid! One of the many after market releases for the Jaguar by Songbird Productions, this platformer was originally supposed to be part of Ocean…