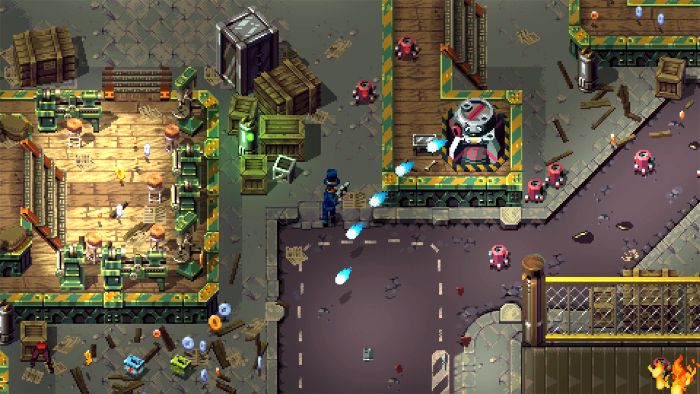 Twin-stick shooting was once all the rage. These days, it’s largely relegated to a small yett loyal niche following. Most modern endeavors take a somewhat more simplistic approach than their forebearers, offering up increasingly faster and shallower gameplay. Every now and again, a game will seek to reconnect to the genre’s roots, and one such example is the Kickstarter indie success that is Tower 57.

The game places players in the boots of a rooster of oddball characters from an investigation service. Choosing three out of a possible six, you’re tasked with entering a vast and expansive tower – the titular Tower 57 – that serves of humanity’s last refuge in a ruined world. Unlike the Mega-Blocks of the Judge Dredd universe, Tower 57 is considerably more cheerful, though no less bizarre. Saturated in steampunk sensibilities, the tower’s upward echelons are host to all manner of dodgy deals and psychotic experiments, many of which are decidedly deadly. All the same, a sense of wackiness is prevalent that helps to offset the otherwise grim subject matter. 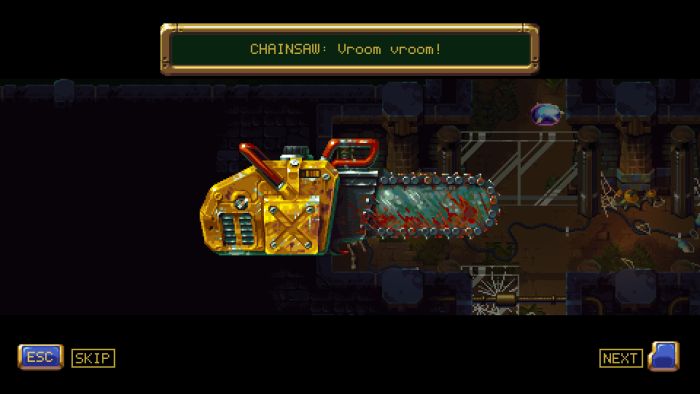 Things start off relatively slow, but switch into high gear before the game’s second act. At its core, it’s basic top-down shooting. Walk into a room or corridor, get confronted with a number of strange abominations, and navigate a pseudo three-dimensional space from an overheard perspective. The weapons range from satisfying shotguns, to more esoteric pickups like poison darts obtained from dead enemies. All have their various uses, but are generally a blast to wield. Your character can also only carry three such weapons at any given time, adding a bit of a tactical edge to proceedings. Additionally, if your main avatar should perish, the replacement will be able to pick up their weapons where they died. It’s a subtle but pleasant touch, especially if only one particular character’s weapon grabs your fancy. You’ll also be able to employ special attacks after defeating enough enemies and filling up a gauge, in typical shmup style.

The aforementioned dying mechanic is Tower 57‘s approach to a “lives” system. Your motley crew can be swapped out, but you should take care not to have any of them die prematurely, and certainly not all three. Should one of them bite the dust, you’ll be afforded a chance to resurrect them via a clairvoyant or simply monetary purchase. Odd as it may seem, dying is sometimes preferable to dismemberment. Yes, it’s true: you can lose your limbs here. Fortunately, you’re able to not only replace them, but upgrade your body at the appropriate vendors. Here’s where Tower 57 feels far suited to co-op, as your ally can help you reach a vendor once incapacitated. 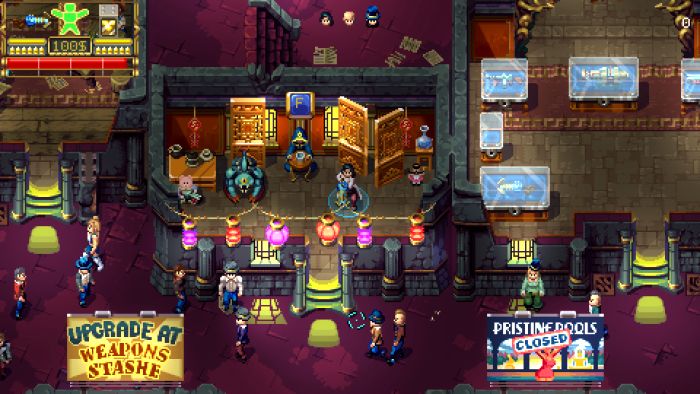 Despite the creative and goofy atmosphere, Tower 57 makes a few stumbles. It includes an aim assist, which I highly recommend you turn off. Many times I encountered scenarios where my shots didn’t fire exactly where I wanted, especially in a cluster of crates and barrels. The perspective is also a bit tricky to navigate, but to be fair, this was also a problem occasionally in The Chaos Engine. And finally, the difficulty seems a tad uneven here and there, as if it was designed with cooperative play in mind instead of single-player. Still, there are minor quips and don’t detract from the overall enjoyment. Well. Not too much, anyway.

At the risk of sounding shallow, one of Tower 57‘s biggest strengths is its presentation. It’s pixel art with a decidedly 16-bit aesthetic, but holy cow, is it ever pretty. In fact, I’d say it’s easily the best example of pixel art I’ve seen in years. The audio is superb, too; meaty weapon sounds, grotesque enemy sound effects, and plenty of explosions and crunches round off the soundscape. However, character one-liners are a mixed bag, and can get annoying very quickly. But that won’t worry the discerning audiophile, as the music is a reflective blend of appropriately-placed Amiga-style tunes. The influence from ambient artists like William Orbit is apparent, and it’s wonderfully immersive.

It’s a right treat to see an Amiga-inspired game get released in 2017. Despite taking a while to get going and making a few misfires, Tower 57 nonetheless hits all the right notes and offers a most satisfying blend of twin-stick shooting and RPG elements, all wrapped together in a cozy 16-bit-inspired package. If you consider yourself a fan of The Chaos Engine, or just want a more deep shooting experience that Serious Sam’s Bogus Detour had to offer, then Tower 57 will be right up your alley. Poke around its official Steam page to see how you can nab a copy of your very own. It’s a blast, truly.

Full disclosure: This review is based on a Steam key for Tower 57 given to Hey Poor Player by the publisher.

So. Many. Enemies. Have you ever wondered what would happen if you took Galaga to a club in Las Vegas, let it do lines of coke off the neon bar…