The first thing to say about GUTS is that it’s gratuitious, stupid and repetitive, but it’s not trying to be anything else. The low poly graphics are ugly, the mutilated character designs are ugly and the subject matter is as bloody as it gets. GUTS focuses on some comedically dystopian future where fighters compete in the legnedary GUTS tournament to gain fame and fortune. The tournament is just as grisly as it sounds, as to win, you need to lop off all your opponent’s limbs!

GUTS has surprisingly in-depth mechanics for all its boorish exterior. Despite being advertised as a party game, the learning curve is actually pretty steep. Each character has a moveset unique to each limb. Many characters can launch projectiles with their cybernetic limbs or use other special combo attacks. Even more confusingly, there’s substitute moves for each limb once it’s been removed from your body! This can create some pretty comical situations where characters will substitute a one-legged forward flip for a kick or a shoulder (or bloody stump) barge when the arm isn’t present! 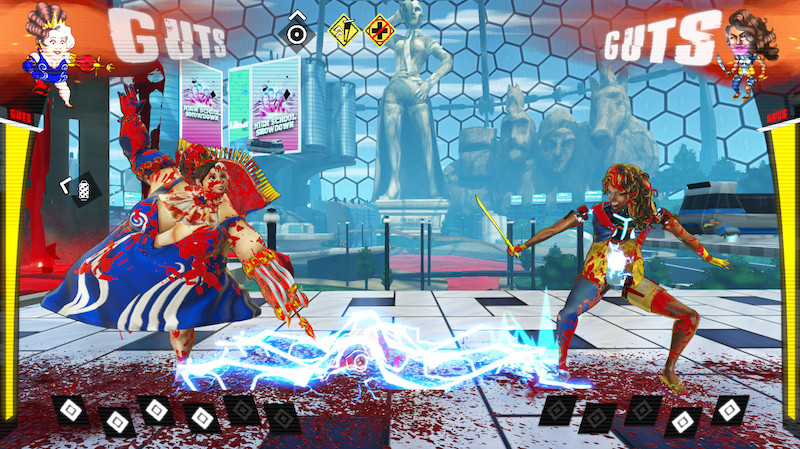 GUTS is as GORY as it sounds.

To lop off limbs, you’ll need to build up your GUTS meter until you’ve got enough power to execute a GUTS move. A GUTS move is heralded by the smug announcer yelling “GUTS move!”, and can range from anything from a flying kick, to a brutal uppercut, to firing a sawblade at your unwitting opponent. And all of them lop of an enemy’s limb if they connect! Not only is there a separate button for attack with each of your limbs, there’s a GUTS move for each limb as well! Learning every GUTS move is crucial as you’ll need to lop of all an opponent’s limbs and execute a final finishing GUTS move to gain victory.

Annoyingly, there’s no obvious way to learn each character’s movesets like in the tutorial which introduces the basic mechanics. To get a decent handle on a character and their wildly divergent limb-specific movesets, it takes a fair investment of time. Every character not only has their limb specific GUTS moves to memorize, they also have “substitute” GUTS moves for when the affected limb has been dismembered. That’s right, characters will charge forward and attack with bloody stumps if need be! 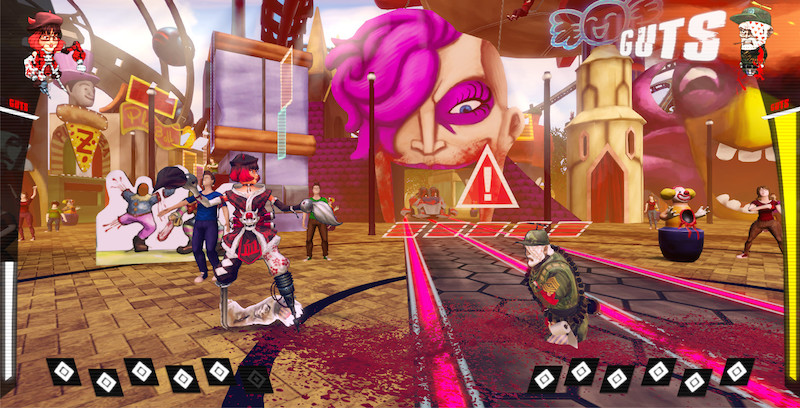 You get a bar of “GUTS points”, which is charged up during matches by recieving damage. You can use these points to dodge through an opponent’s attack, reclaim one of your lost limbs that are lying on the floor, or even throw a fallen limb at an opponent and scythe of one of theirs in the process! Though these powers can give rise to a greater degree of depth and creativity in the gameplay, they can also create an annoyance for those who prefer more decisive beat em ups. These powers have the effect of leveling matches out and making them drag on longer, as dismembered characters can just repeatedly reclaim their lost limbs.

After a match has gone on for a while, the flamboyant “judge” will announce a new modifier being added to speed up the end of the match. These will range from “double dismemberment” (where you can lop off two limbs for the price of one!) to “no healing”. These modifiers have the effect of drawing a match to a close much more rapidly, but can also have the rather annoying effect of making the rest of the match feel redundant as fighters trade limbs in a stalemate. 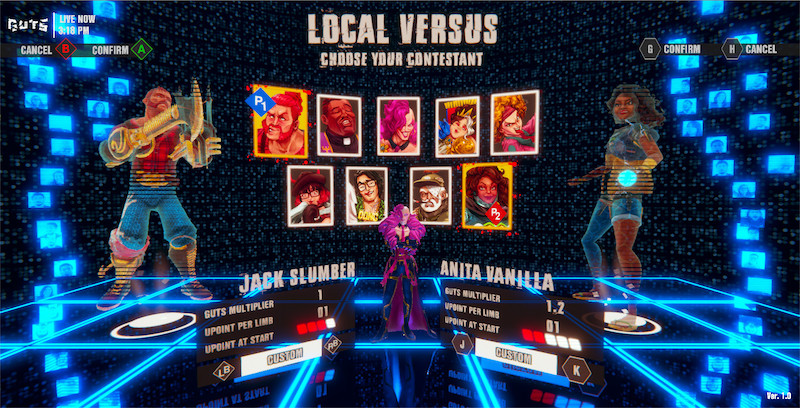 A real colourful coterie of weirdos to choose from.

The scenery is as much your enemy as your opponent is. Strewn around every arena are meatgrinders, flamethrowers, train lines and Indiana Jones-esque slicing machines. You’ll get a moment of warning before these activate but it’s easy to lose track of your positioning when fighting, or to accidentally fling yourself into them with a overzealous GUTS move. The scenery can have the effect of ending a match with frightening speed later in the match. If double dismemberment is active and you’re knocked into a diabolical slicing machine with a lucky GUTS move then you can go from fully limbed to a Pythonesque Black Knight defiantly hopping around with four bloodied stumps.

Overall, GUTS punishes skilled and less skilled players evenly. Even when you’ve climbed the steep learning curve, it’s very difficult to end a match quickly and decisively because of early game healing, and it’s quite often a match will end out of nowhere because of arbitrary rule changes or the malignant scenery in the late game. Despite enjoying some of the zany randomness of GUTS, after a short while I couldn’t help longing to play a more tight, intuitive, skill-focused beat-em-up instead. 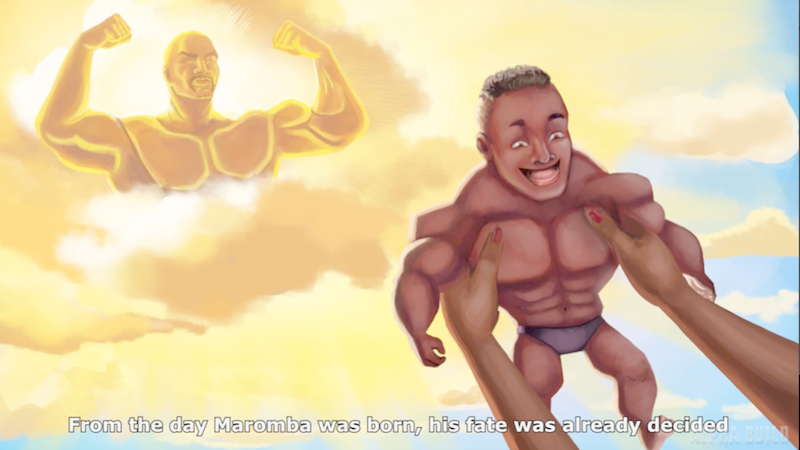 The story cutscenes are probably the best part about GUTS.

The humour in GUTS is as wildly hit and miss as some of its moves – some land to devastating effect while others go flying into a meatgrinder. There’s entertainment to be had in some of the story cutscenes – which are dumb in a way that gets at least a snort of amusement. I did enjoy how the lumberjack went on a quest to blow up his rival’s logging operation with “a fuckin’ nuke”, with predictably backfiring results when the ending rolled around.

On the other hand, some of the characters are just repetitiously dumb. There’s a Chinese dude named “Shao Dong” who speaks entirely in references to his own dick. Hearing him yell “Money shot!”, “Bukkake!” or “Your mother likes the Dong!” gets desperately old after the first 10 times you hear it, and that’s just in the first match you play with him. Likewise, there’s a character who seems to be some sort of spoiled Russian trophy wife, who petulantly cries “I want to watch television!” (and after hearing this as many as twenty times in one match, I really wanted to switch the game off and watch some Netflix myself).

GUTS is an innovative fighter with a claret coloured splashing of gore and gratuity. If you can appreciate the often adolescent humour, steep learning curve, randomness and repetitiousness, you might be able to enjoy GUTS. Though it’s a game primarily about dismemberment, the organ you’ll have to disengage the most to really find the fun in GUTS is your brain.