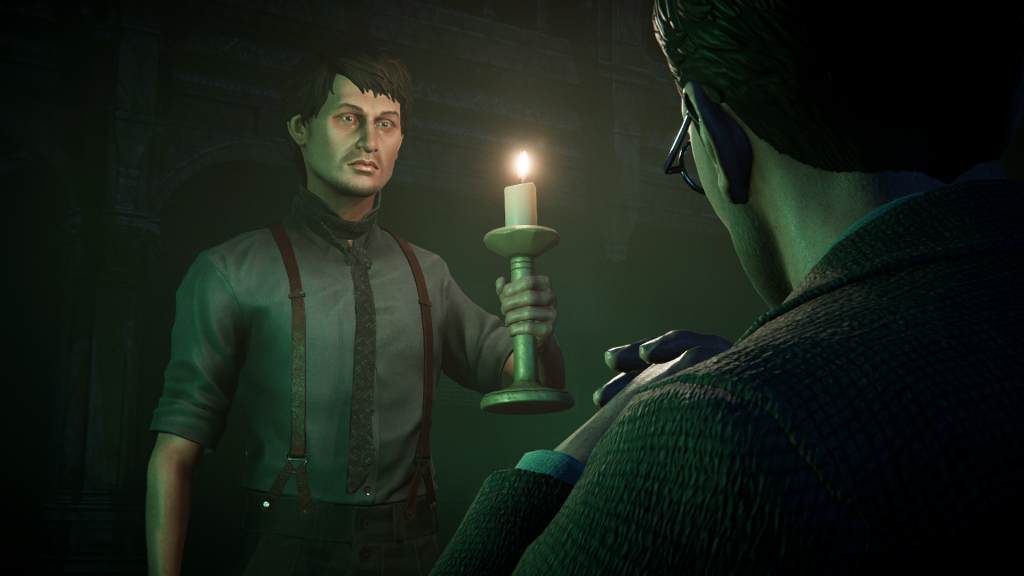 Set in an eerie, Gothic mansion in the hills of Scotland, Black Mirror draws upon classic horror for its inspiration for this tale. This game contains the trappings of an early Gothic story- a remote, bleak mansion; an ancient curse; years of secrets- but none of the substance to truly furnish a sense of internal torment that defines one. The game suffers from frustrating mechanics, one-note characters and an overall lackluster sense of horror. What is ostensibly a love letter to classic horror falls flat in its attempt to instill any true sense of dread.

The game revolves around the protagonist David Gordon’s investigation in to the mysterious circumstances surrounding his father’s death. After having lived his entire life in India, David is summoned to Sgáthan Dubh (scottish gaelic for “Black Mirror”) Manor in order to receive his inheritance, which includes the manor and the surrounding lands. The Gordon family has owned this estate for many generations and is a prominent family in the area. However, as it is pointed out both by the game’s tagline and by David’s own mother in a worried letter, “Blood is not always thicker than water.” It is with that sense of uncertainty that David begins his investigation of his family’s home and its secretive residents. 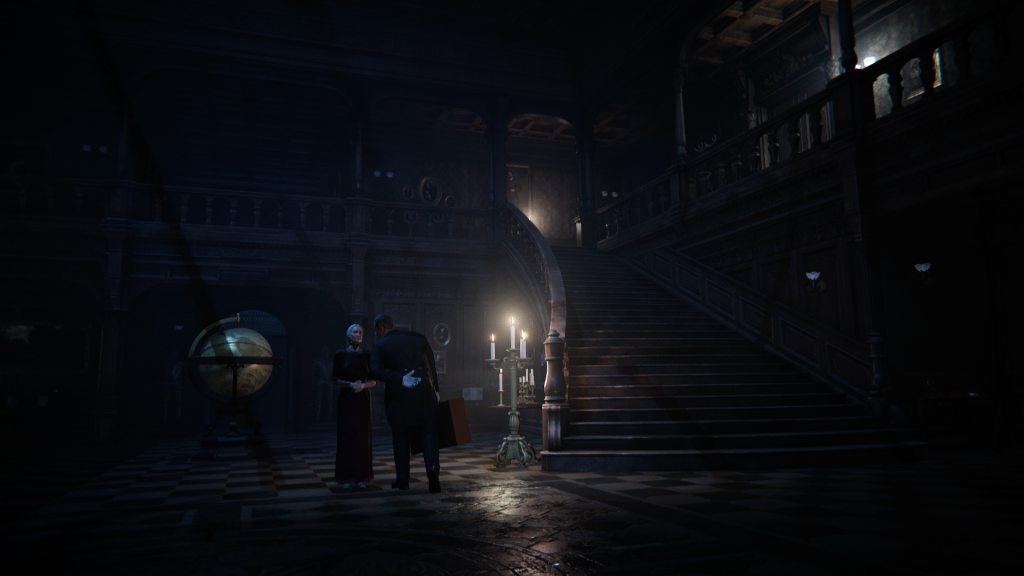 The butler and the Lady of the house speak.

Upon arriving at the family home, David is introduced to an archetypical cast of characters: a droll, yet sassy butler, a creepy, prophetic groundskeeper, a neurotic lawyer and his callous, secretive grandmother. All of them clearly know a lot more about the house’s history and David’s father John’s death. Though David is understandably loaded with questions, these characters seem to delight in dangling the truth just out of his reach, leaving him to uncover answers on his own. Dialogue options are available to the player in order to influence the conversation; however, these choices are often futile, forcing the player to choose a specific action of dialogue and seemingly have no repercussions other than what is intended.

Interactions with these characters is further mired in cheesy, overly-dramatic delivery, awkward timing and stiff, unemotional facial animations. Key dramatic moments in the story lose impact when characters hardly react. In both cutscenes and regular interactions, frames dropped and sound cuts out, making all conversations choppy. There are some voice actors who do a great job lending to the Gothic ambiance with low, gruff voices, but other key characters are quite over-the-top.

Doomed to Wander the Halls Forever 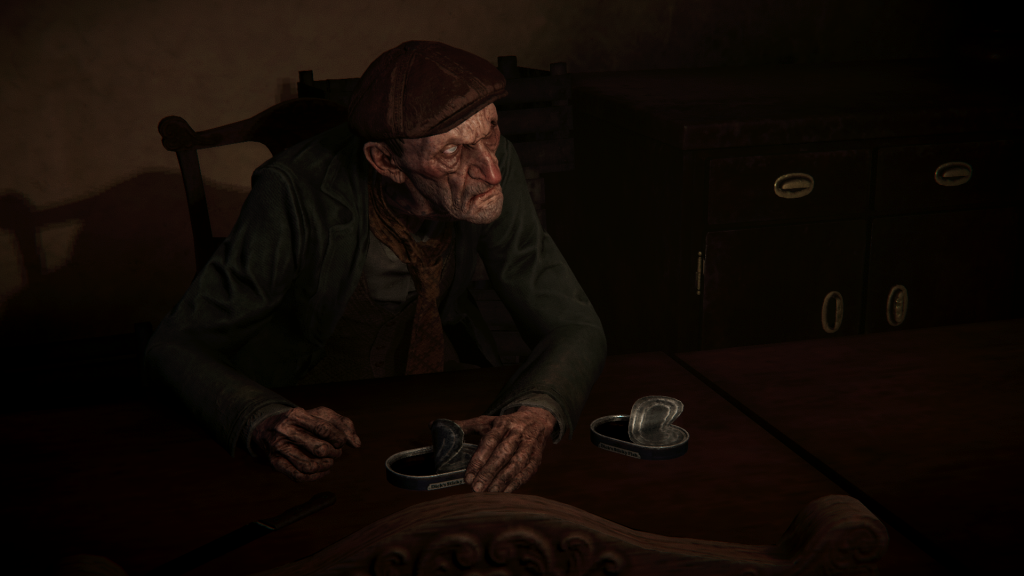 Another form of investigation comes in the form of interaction with the ghosts of the past. As David becomes increasingly afflicted with the same madness that plagued his father, he begins to see the echoes of atrocities that have occurred within the walls of the estate. For instance, he is able to see a time many years prior when his grandfather brutally attacked one of the family members in the greenhouse and David can look closely at that details in order to find clues. However, scrutinizing these events requires precise timing by the player, or else the ghost will kill you, resulting in a game over. This task becomes a bit frustrating each time because of the stiff movements of the player character. It is quite difficult to maneuver David in to the scene, align yourself perfectly and tap the interaction button before getting killed.

After obtaining the requisite notes and clues, players are prompted to solve short puzzles to unlock information about the Gordon Family’s past. These puzzles are moderately challenging and require a bit of critical thinking to solve. This portion was the most interesting part of the game, though it too required a fair amount of “pixel hunting” in order to find points of interaction. After scouring for clues, however, it was up to the players to decipher glyphs, determine button sequences and crack codes. 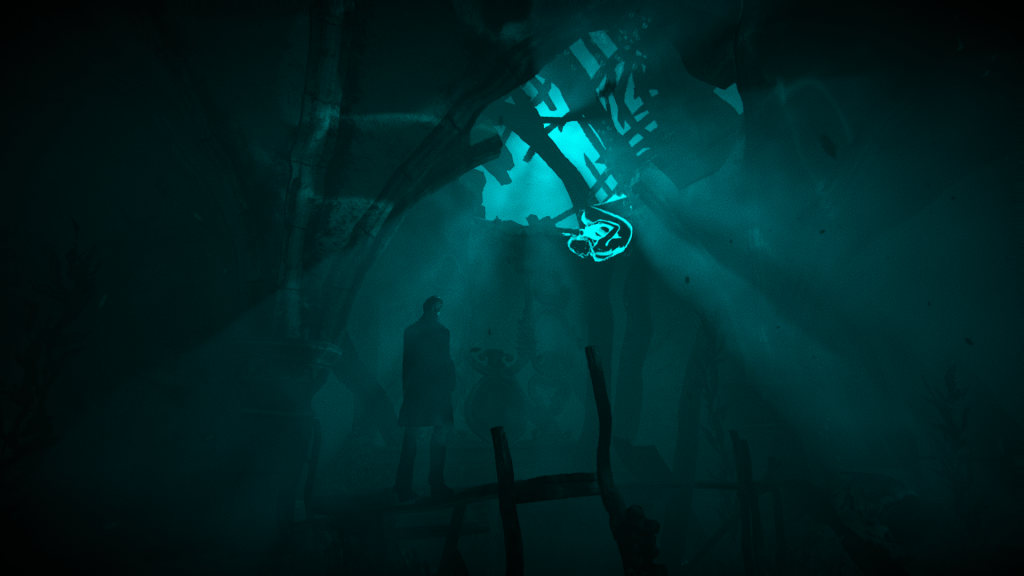 Black Mirror Manor is Gothic and spooky, as though Poe designed it himself. That’s precisely what the game would want you to think too. While exploring the library, David will read passages from the books on the shelves, which include excerpts from H.P. Lovecraft, Horace Wallpole and, of course, Edgar Allan Poe himself. Each of these excerpts makes commentary on the state of the mind and how reality is a “dream within a dream.” Putting these authors in the game was the developers way to add a sense of existentialism to the game that just wasn’t there. David is slowly slipping in to “madness,” but this occurs in a predictable way, with a clear delineation of reality and fantasy.

Black Mirror has the ingredients for a thought-provoking horror game, but is fairly undercooked. The puzzles are interesting, but the rest of the the elements of the game fail to realize the full concept of the game, and the result is a story that falls short of what it wants to be.

Full Disclosure: This review is based on a review copy provided to Hey Poor Player by the publisher.