“I Hear Of Shoggoths Everywhere” 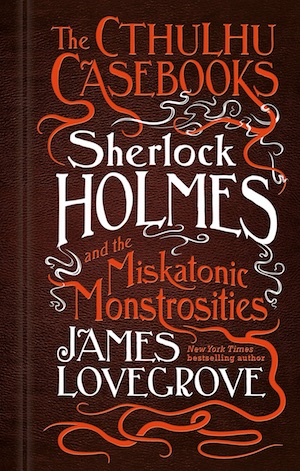 Some time ago I reviewed Sherlock Holmes and the Shadwell Shadows, the first in a series by James Lovegrove featuring the famous detective as you’ve never seen him before: battling wits against the diabolical creations of H.P. Lovecraft. Now he is back with Dr. Watson – as ever – in tow, and their jobs are far from done.

For readers it’s been only a year between Shadwell Shadows and Miskatonic Monstrosities, but for Holmes and Watson it’s been a decade and a half. Why there’s such a time gap between novels, none can say. Furthermore, Lovegrove offers no real explanation, but it’s not as though the story lends itself to needing one. Despite having aged, Watson being recently widowed, and a few gaps being filled in the narrative further down the line, one might guess that only a day has happened between the two stories. Or at least, one would guess as much at first.

It becomes clear that Holmes and Watson have garnered a good deal more experience against the eldritch and execrable, lending credence to their skills as both detectives and warriors against the supernatural. What they’ve also got a good deal more of is animosity. Naturally battling monsters isn’t easy, but it’s apparent very early on that such activities have strained the point of Holmes and Watson’s relationship as well as their bodies and psyches.

Can the original dynamic duo keep it together and battle the return of a deadly foe? Can Lovegrove continue to deliver a story that is both fresh and equally familiar to audiences beholden to two of the most beloved literary creations of all time? Well, let’s find out.

“A Hierarchy Amongst Horrors” 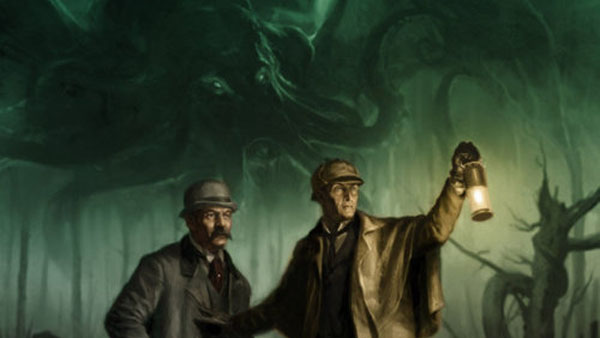 Sherlock Holmes and the Miskatonic Monstrosities is a tale told in two parts. The first brings readers into the mystery at large. The second primarily consists of events from the perspective of the guilty party, presented with the intent to give the story depth. The presentation has similarities to the introductory Sherlock Holmes novel A Study In Scarlet in this aspect. This manner of callbacks were details I admired from Shadwell Shadows, so I’m happy to see them return here.

Lovegrove continues to showcase his deep knowledge of the subject matter of both Doyle and Lovecraft in this book, though leans more heavily toward the latter with only minor nods to Sherlockian lore this time around. For example, the events from stories such as “The Color Out Of Space” and “The Shadow Over Innsmouth” are brought up fairly frequently, while the second portion of the story takes on a distinct “Herbert West Re-Animator” vibe. Meanwhile, stories such as “The Hound of the Baskervilles” are brought to attention with some length wherein other,  smaller inspirations, such as elements of “The Case Of The Empty House”, were absorbed into the narrative without being blatant in its influence.

This gave me the impression that Lovegrove has become more confident in his pastiche writing. Having taken more liberties with this story then he did with Shadwell Shadows, the story at large felt less handicapped by the expectations of a reader familiar with these two worlds. This meant that I could sit back and enjoy the ride instead of scrutinize every line for accuracy. That’s not to say that Lovegrove’s execution is flawless, though. His characterization of Holmes and Watson slipped slightly due to some alterations in this story which sometimes made things hard to digest and, at times, even cringey.

“Civilization Is Thin Ice, Is It Not?” 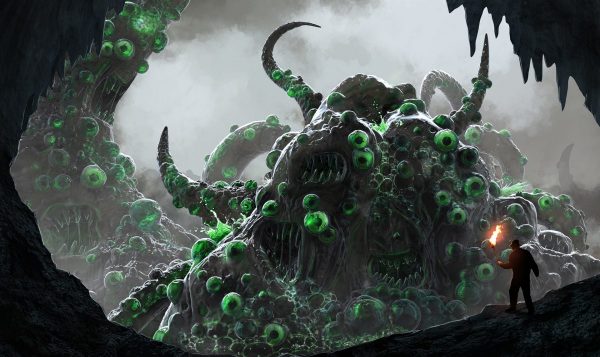 The story begins with Holmes and Watson having just wrapped a case and, as luck would have it, another one is just around the bend. Gregson, the Scotland Yard agent that survived the events of Shadwell Shadows with the Holmes brothers and Watson, informs the duo of a crazed patient at a nearby sanitarium that is apparently writing and speaking R’lyehian (the language of the Old Gods for those who aren’t aware). The patient in question has no idea who they are, is horribly mutilated, and was apparently found naked and injured some days before. Naturally, the boys’ interest is piqued and they make their way to Bethlem Sanitarium to investigate.

Shortly after arrival, Holmes and Watson determine that the hieroglyphs the man is writing on his cell walls speak of an entity known as The Hidden Mind. Unfortunately the encounter warrants little else in terms of information so they are left to find clues elsewhere. Through some luck they link the patient to being old friends with one Nathaniel Whateley, a surname that ought to be familiar to anyone who knows the story “The Dunwich Horror”.

With newfound knowledge of the identity of the patient, Holmes and Watson return with hopes to revitalize the man’s memory, only to find that he is now missing. Taken in the night, in fact, by a nightgaunt. The two must now track the kidnapee, through less than conventional means that callback to the events of Shadwell Shadows, in hopes of rescuing him. Things, however, turn out to not be all that they seem on the surface.

“So Said The Necronomicon”

An excerpt from the untranslated Necronomicon | I can’t find the artist details to credit them.

Holmes and Watson succeed in locating the patient, whom they now know to be the man Zachariah Conroy, believing him to now be in the clutches of Nathaniel Whateley.

Conroy and Whateley it seems had been friends at Miskatonic University some years before the events of the story. It is learned that the two took a trip up the Miskatonic River and were the sole survivors of an expedition to seek out unusual lifeforms. They claimed, in news reports given to our heroes by Holmes’ brother Mycroft, that they were attacked by the native tribes of the region, but this story does not align with the wounds Conroy obtained (missing his left hand and a nearly melted face). Whether these events also contributed to Conroy’s mental state remain to be seen at the moment.

Tracking Conroy leads them, instead, to Whateley, who had coincidentally disappeared around the same time. Not altogether surprised at their discovery, the three men exchange some words about the case and how it was that Holmes managed to locate and link the two men together. Things are short lived though as Watson and Holmes are drugged, waking later in a locked farmhouse with a caged ghoul and the now very dead body of one Zachariah Conroy. In the barn with them, however, is Conroy’s journal that dictates the true events of the Miskatonic expedition and the deplorable things the two men did on their journey.

This portion of the story takes up a sizeable chunk of the book, about 163 pages total. I don’t wish to spoil anything but to paraphrase, the reader, Holmes and Watson learn the following: Conroy and Whateley were in fact responsible for the deaths of their team and blamed the deaths on the Wampanoag tribe that actually saved their lives. 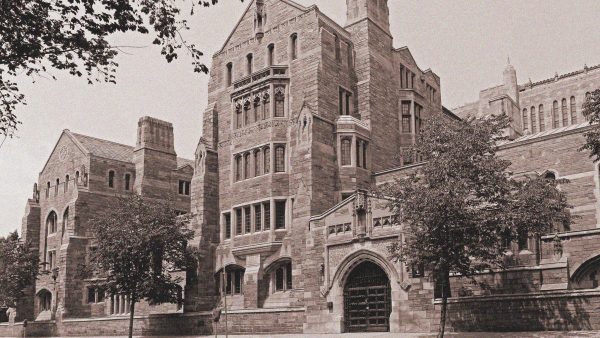 It turns out Conroy was researching the transference of consciousness from one body to another. Whateley, more interested in cryptozoology and obsessed with everything in the Miskatonic’s copy of the Necronomicon, saw potential in this mad science and befriended him for the sole benefit of his research. Both men at some point fall under the influence of The Hidden Mind, often referred to as R’luhlloig throughout the majority of the story.

While Whateley’s enthrallment is known early on, it is inferred that Conroy may have become as much also. Yet what happened to leave him in his mental state while Whateley was free to pursue all of his interests?

It’s here that I’ll leave off. I don’t wish to spoil anything else, because despite some faults that I found the book is quite good. Stronger both in narrative and creative development than Shadwell Shadows, the  liberties Lovegrove takes here are much more adventurous than this novels’ predecessor.

That said, I was sad to read that the relationship between Holmes and Watson had diminished. This was in part due to the death of Watson’s wife at the hands of a byakhee, but also Holmes resenting being dependant on Watson’s patronage. In the original canon this was very much the reverse, but because tracking down monsters in Victorian England doesn’t pay the bills, the two survive thanks to Watson’s stories (the ones fans already know) and his medical practice.

Holmes’ continued use of cocaine and his habits of overexerting himself also strains the good doctor’s nerves. In his own internal musings, he sometimes plays with the idea of being rid of Holmes. This. he claims, was his inspiration for writing “The Final Problem”, the original story where Holmes and Moriarty tumbled to their deaths over the Reichenbach falls.

“The Oldest And Strongest Emotion Of Mankind Is Fear” 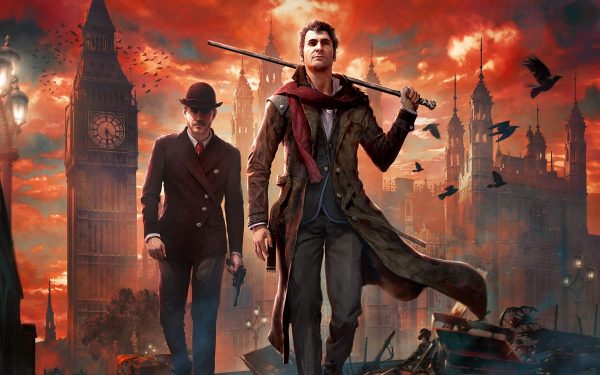 Ultimately I still harbor a few complaints, the most prevalent being that villain’s monologues take more page space than their defeat. Readers will encounter R’luhlloig and learn just who, or what, it is. This Old God is solely a creation of Lovegrove’s by the way, so no google searching will help you here. This leads into another complaint that I harbor however, and that is R’luhlloig’s origin story. I can’t say anything here without some major spoilers, but if you take up this book I’d love to know your thoughts.

I’ve already expanded upon my dislike for the fragile friendship between Holmes and Watson, so I won’t go into further details here, but what I will touch upon is the racism in the book.

Yes, this story takes place in the late 19th century and is also written as though it were from that era. This was not a progressive era. Furthermore, I’m well aware not only of the racist notions in the Doyle stories, but of the overwhelming racism that permeates nearly every facet of Lovecraft’s work. It’s just a complaint I harbor, given that the novel is actually modern.

That being said, I devoured this book light a nightgaunt feeds off fear. Fans of either or both genres will certainly get a kick out of this series, and it remains highly recommended by myself.

Sherlock Holmes and the Miskatonic Monstrosities was written by James Lovegrove and published by Titan Books.

This review is based on an ARC given to Hey Poor Player by the publisher.