Taking The Art Of Zed killing To The Next Level 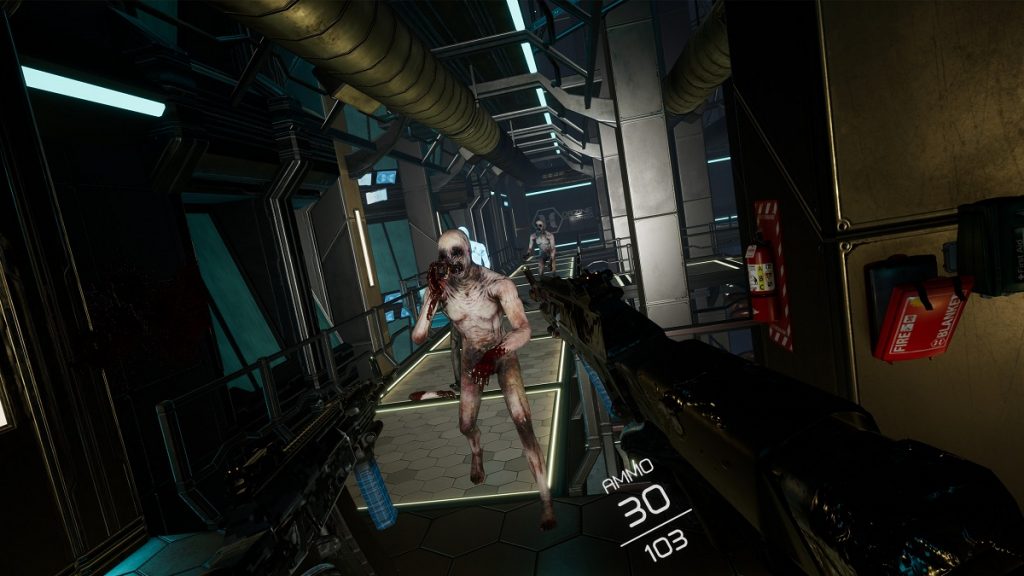 Tripwire Interactive certainly had their work cut out for them with Killing Floor: Incursion. The latest game in the studio’s series of fast-paced, zombie-killing horde shooters, Incursion marks the franchise’s first foray into the world of VR. Given the previous games’ heavy emphasis on manic action and precision combat, I went into this review with a healthy bit of skepticism as to how this would translate into a virtual reality experience. Thankfully, Tripwire blew away my expectations and left them twitching on the ground like a bullet-riddled Clot. Killing Floor: Incursion is a bloody and visceral tour de force that will grab you by the throat and leave you begging for more.

Killing Floor: Incursion doesn’t quite move at the breakneck pace of Killing Floor 1 & 2. Instead, it encourages them to explore a series of sprawling stages, armed with little more than a couple of guns, a pair of knives, and a flashlight that not only allows you to light your way but also uncover hidden messages and other secrets. It’s a more methodical experience that forgoes the chaos found in its predecessors in exchange for a more immersive experience that plays to the strengths of the VR medium. That’s not to say you won’t be mowing down waves of Zeds – there’ll be plenty of that. But you’ll spend just as much time taking in the eerie sights and scenery, which really helps build up the tension between onslaughts of demonic creatures. 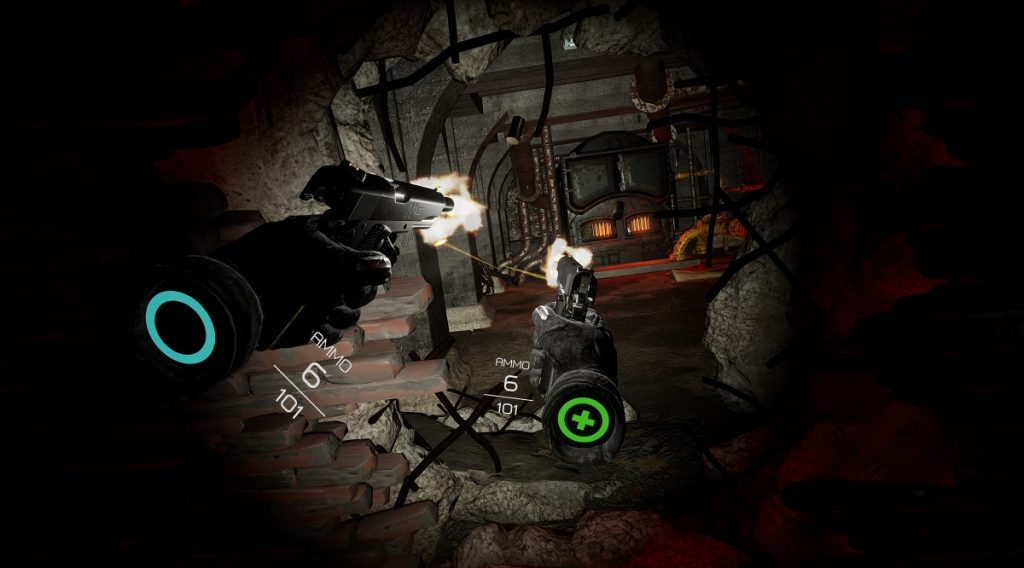 The story mode is the star of the show in Killing Floor: Incursion. In it, you (and up to one friend, if playing in the co-op mode) are dropped into a corrupted version of evil corporation Horzine Biotech’s combat simulator. Demons are running amok, and death in the simulation results in death in the real world. That said, you’ll need to make your way through four distinct areas, kill droves of Clots, Crawlers, Stalkers, and other iconic Killing Floor Specimens, and discover what’s causing the glitch in the system.

It’s a simple premise, but it serves as a perfect excuse for a bit of the old ultra-violence. Dispensing death feels fantastic with the Oculus Touch controllers. It’s hard not to feel like a total bad ass when you unholster your pistol, plant a bullet between the eyes of a shambling Zed, then in one swift motion lob a throwing knife into his nearby pal’s larynx, sending his head pirouetting through the air accompanied by a geyser of blood. Developer Tripwire Interactive has done an amazing job of delivering the ultimate virtual power trip.

Yet despite this, there’s still plenty of moments that will keep you totally on edge. One of my favorite moments took place inside a derelict farmhouse. It was dark and claustrophobic, and I could hear Zeds shambling all around, just out of sight. I honestly hadn’t felt this on edge since the first time I worked my way through Condemned: Criminal Origins. By the time I finally fought my way out into the fields beyond the farmhouse I could feel my heart beating in my throat. It’s this delicate balance of adrenaline-filled action and overwhelming dread that make Killing Floor: Incursion one of the most satisfying VR releases of 2017.

The Tools of the Trade 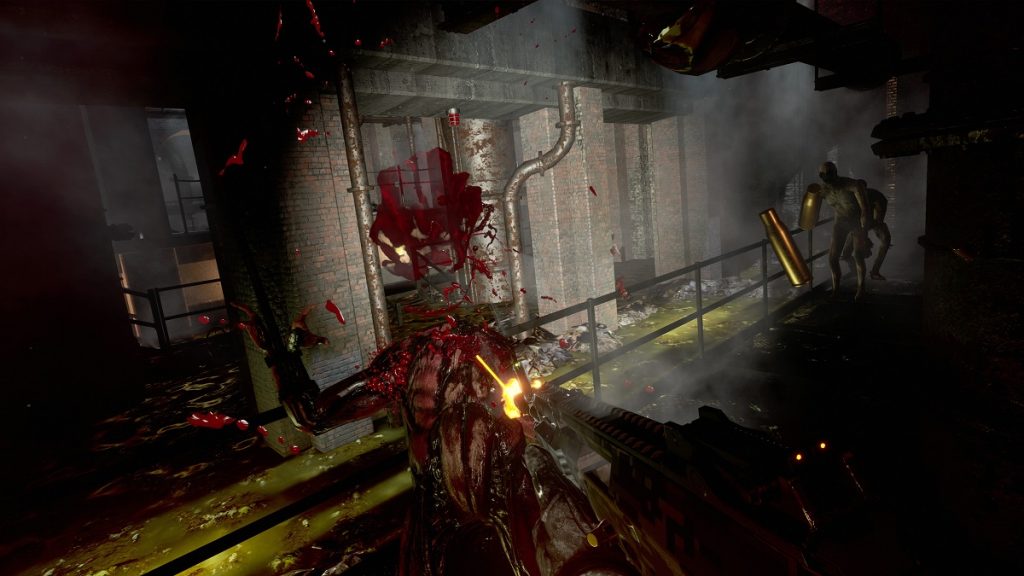 Of course, a shooter is only as good as its arsenal is. Thankfully, while Killing Floor: Incursion doesn’t feature the most robust one around, each weapon is incredibly satisfying to use. Melee weapons are an absolute joy to wield. There’s nothing quite like sending a Zed’s head soaring into the distance with a well-timed swing of a fire axe. Likewise, chucking a throwing knife into the forehead of an approaching crawler as if he were Lo Pan in “Big Trouble in Little China” never fails to bring a smile to my face.

As great as the melee weapons are, you’ll be glad you have some more substantial firepower when it comes time to tackle boss monsters. Killing Floor: Incursion’s selection of machine guns, sniper rifles, and shotguns help even the odds. Not only are these weapons incredibly powerful, they’re also a blast to handle. Whether you’re aiming down the scope of a sniper rifle to pop a ghoul’s head like an overripe melon, or racking a pump action shotgun after filling a baddie’s chest with buckshot, you’re going to love how these weapons handle.

The final tool in your bug out bag is your drone. This handy sidekick is good for pointing you in the right direction. However, that’s not its only purpose.  You can also deploy it to find items in the field. And considering just how easy it is to burn through supplies, having your drone scour the environment for extra bullets and health kits can really come in clutch.

So Many Ways To Slay 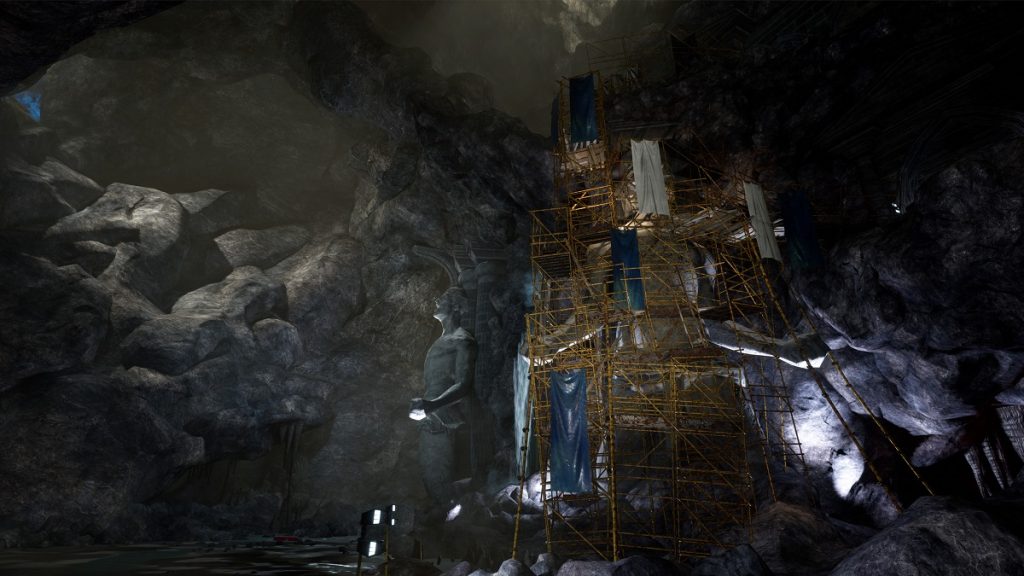 Killing Floor: Incursion comes packed with a variety of control schemes to ensure virtual reality veterans and VR neophytes alike will feel right at home. Both and teleport locomotion modes are available from the options menu. Additionally, you can switch between snap and smooth rotation styles. Personally, I found smooth rotation and locomotion to be the most immersive way to play, but your character’s rather slow movement speed did present some problems during boss fights. I found myself using a combination of the two movement types in these situations which, while not ideal, did manage to get the job done – but at the price of immersion.

Additionally, you can’t climb ledges or jump while using free locomotion. That said, you’re kind of forced to use a hybrid control scheme no matter what. Even still, this problem only rears its head occasionally and is easy to overlook in the long run. Still, it can be pretty jarring when it does occur.

A Hell Of A Ride

Killing Floor: Incursion is a blast while it lasts. However, with only just four stages, the story that can be burned through in just a few short hours. On the plus side, there’s also an endless horde mode that you can tackle which adds some extra replay value to the package. Still, I can’t help but wish the campaign was just a few missions longer, especially given the $40 asking price.

Despite its brevity, Killing Floor Incursion is a sublime VR power trip that’s equal parts exhilarating and terrifying. Whether you’re taking the fight to the Zed horde solo or waging war with a friend at your side, this is one bloodbath you won’t want to miss. Just be sure to bring a poncho. Who knew slaughtering waves of the demonic undead was such messy work?

Full disclosure: This review is based on a review copy of Killing Floor: Incursion provided by the publisher.