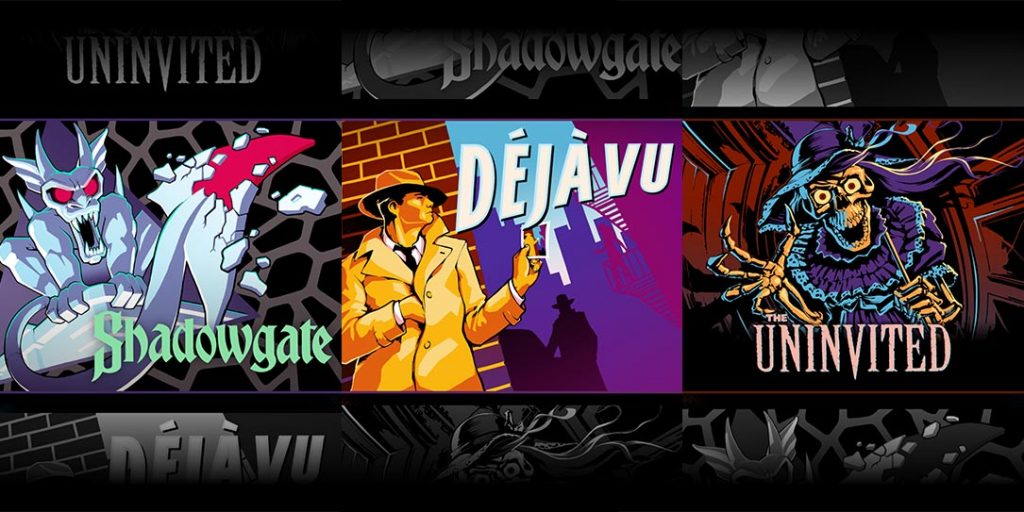 For as long as I can remember, I’ve had a special soft spot for point-and-click adventures. My addiction first took root after spending countless hours with classics such as The Secret of Monkey Island and Hugo’s House of Horrors on my friend’s Tandy back in the early 1990’s. And while I ended up enjoying all of the must-play Sierra and LucasFilm titles in my formative years, one series, in particular, drew me in like no other.

ICOM Simulations’ MacVenture series may not get the same recognition as games crafted by the legendary LucasFilm alumni Ron Gilbert and Gary Winnick, but it certainly deserves your attention. The first game in the series was the gritty detective noir mystery Deja Vu, which released on the Macintosh in 1985. However, three games followed over the next three years. Uninvited was an eerie trek through a haunted house full of deadly traps and murderous ghosts. Shadowgate, on the other hand, plopped players into the game’s titular castle as they try to outwit a crazed warlock hell-bent on resurrecting a fearsome demon. Lastly, in 1988 ICOM Simulations released Deja Vu II: Lost in Las Vegas, once again putting players in control of detective Ace Harding.

With the exception of Deja Vu II, all of these games made the jump to the NES in the late 1980’s. And that’s where I first discovered the series after plunking down a cool Lincoln for a copy of Shadowgate at my local Funcoland. The game had it all: challenging puzzles, vibrant graphics, a haunting soundtrack, and countless ways to die a grisly death. Now, a new generation of players can experience this timeless classic, along with Uninvited and Deja Vu with The 8-Bit Adventure Anthology: Volume 1 thanks to the folks at Abstraction Games, offering all three of these NES cult classics in one slick, nostalgic package.

A Near Pixel-Perfect Port 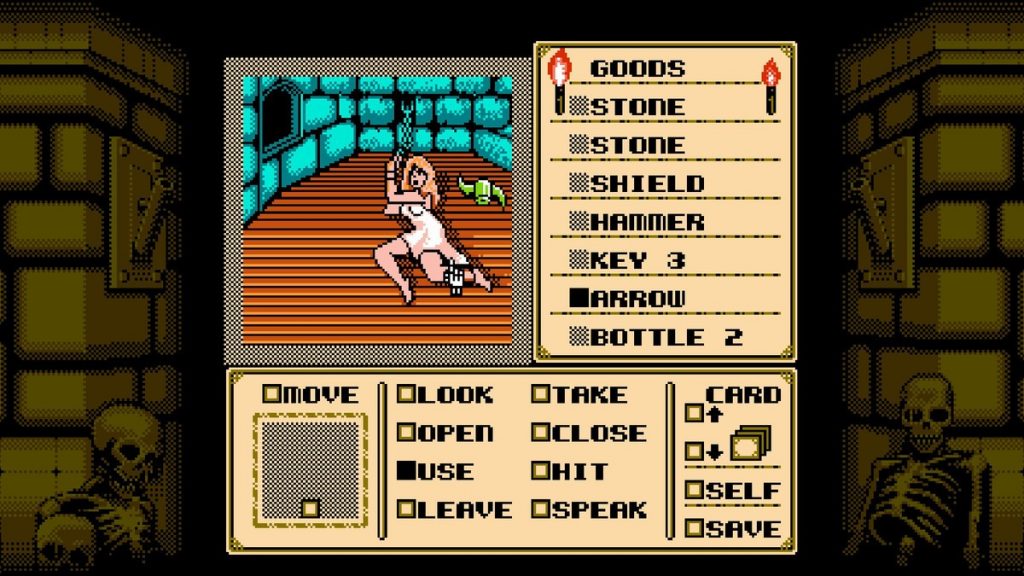 Damsel in distress or beast awaiting a feast? Only one way to find out!

The 8-Bit Anthology is nothing if not true to its name. There’s no fluff or unnecessary spit and polish added to this package – just the essentials. The game boots up to a simple screen where you can select between Shadowgate, Uninvited, or Deja Vu, then you’re off to the races. You won’t find any flashy added cinematics or overhauled visuals to speak of. Apart from the newly-added border artwork that frames the game window, these games look just like they did when they originally released over two decades ago. Which is fine by me. After all, players gamers looking for something a bit more spiffy in terms of visuals can check out Zojoi’s superb 2014 Shadowgate remake. And if you’re a fan of chunky, 8-bit sprites, you’d be surprised at just how well these three gems hold up to this day, with detailed character sprites, eerie backgrounds, and plenty of little touches that pull you into the experience.

If you’ve ever played a point-and-click adventure game before, you’ll feel right at home jumping into The 8-Bit Anthology: Volume 1. The action is displayed in a large window which shows the player’s perspective. You interact with the environment and solve various puzzles by using the items you collect and issuing commands such as “look” “open” “use” and “hit”. It’s a simple and occasionally inelegant system that often requires a bit of guesswork and trial and error. Still, once you come to grips with it it’s serviceable and functions similarly to the interface found in LucasFilm’s SCUMM-powered adventures and, more recently, Terrible Toybox’s Thimbleweed Park.

For the most part The 8-Bit Anthology: Volume 1 is a one-to-one, pixel-to-pixel port. However, these three games do suffer from one particularly annoying issue that I’ve never experienced in my hundreds of hours spent with the original NES trilogy. For some strange reason, the UI is a bit manic at times, and will occasionally select the wrong action, even if you’re clearly highlighting something else. This is especially annoying if your “use item x” command suddenly changes to “speak to item x”, or something similarly nonsensical, forcing you to go back through several pages your inventory to combine the items you had originally intended to use. 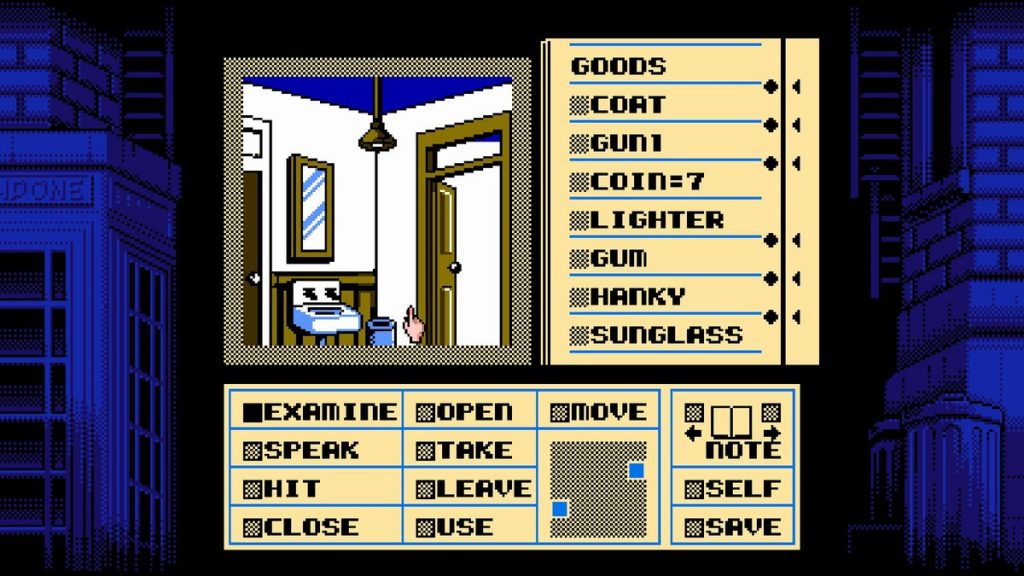 While these games hold up great, the UI may be a bit more finicky than you remember.

Like I said at the outset of this review, The 8-Bit Anthology features some really satisfying brain teasers. Solving puzzles often requires some delightful feats of mental gymnastics. But when you ultimately find the solution to each problem, it feels incredibly rewarding.

Without a doubt, most of the puzzles found in these games are brilliantly conceived. But there are plenty guaranteed to provide hours and hours of trial and error too. And considering one wrong decision can lead to your messy death, you’ll want to be careful. Spoilers be damned, don’t pick up the ruby that you find early on in Uninvited, it comes packed with a devious curse that will make it impossible to finish the game. Yes, the folks at ICOM Simulations were a devious bunch, and you’ll find that out the hard way over the course of these three adventures.

Thankfully, each game offers three save slots to take advantage of, which allows for some experimentation. And when you do meet your messy end, there’s no need to stress. You can always count on restarting just a screen away from your premature demise.

If you missed out on Shadowgate, Deja Vu, and Uninvited when they first released and are a fan of point-and-click adventures, you owe it to yourself to add The 8-Bit Adventure Anthology: Volume 1 to your collection. All three of these games will offer hours of satisfying puzzles, tense atmosphere, and more untimely deaths than you can shake a life insurance policy at. While it does suffer from occasional control hiccups and a dated UI, it’s easy to overlook given just how engaging each of the included games is. If you have a soft spot for point-and-click adventures, this nostalgic collection is worth every penny.

Full disclosure: This review is based on a copy of The 8-Bit Adventure Anthology given to Hey Poor Player by the Publisher