A Solid Infusion of Modern and Retro 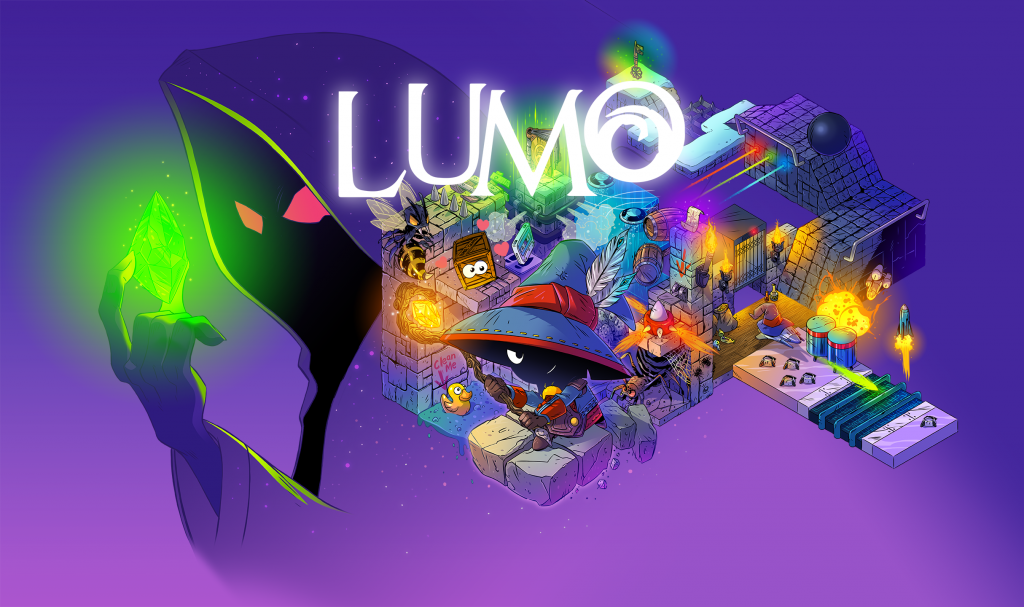 Looks are definitely deceiving when 3D it come to Lumo. At least, to me they were. After first learning about the game, my initial impression was something along the line of it looking like a cute, relatively simple isometric platformer with a handful of gimmicks, and a heavy dose of inspiration drawn from the gaming culture of yesteryear — especially the 80s. Now, technically I wasn’t wrong. My knee-jerk opinions held true throughout the entire game. But, as I quickly found out, the game’s elements have a bit more depth than I had originally given them credit for.

Lumo doesn’t just parody retro video games; it does its best to write a genuine love letter to the Golden Age of Video Games that so many people remember fondly. It also attempts to bring those elements into a more modern setting. I would say that it’s done well in regard to both of those things. No, it isn’t the most challenging game that I’ve played this year. Nor the most exciting. But it manages to capture the spirit of 80s gaming culture very well — and that in and of itself is a definite success. 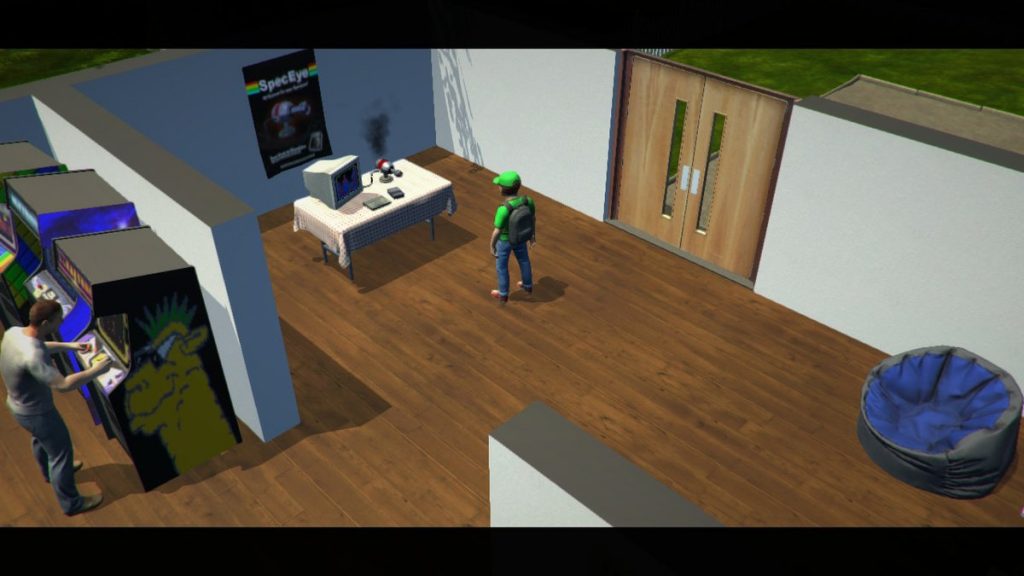 It was like this when I got here. I SWEAR.

Lumo manages to eminate 80s gaming goodness even where its narrative is concerned. The game’s story involves you, as a nameless hat-wearing child, wandering into… some kind of video game-filled building. (It might be an arcade? I’m not sure.) After making your way to the back of the building, you notice a strange-looking device (which is also smoking, might I add) sitting on top of a table. Instead of leaving it alone like everyone else, you decide to get a closer look at it. And, naturally, that’s exactly the time that it begins to start sparking, go haywire, and hit you with a beam that somehow transports you inside of the computer that it’s connected to.

Aside from the beginning, there isn’t much of a story. To be fair, I suppose that Lumo‘s vague storytelling fits the whole 80s theme pretty well. Still, it left me kind of disappointed. I found myself asking more and more questions — questions like like why your character turns into a tiny wizard, or how I collecting computer hardware while inside of a computer — as I progressed through the game. It would have been nice had the game shed even a little bit more light on the circumstances surrounding everything, if you ask me. 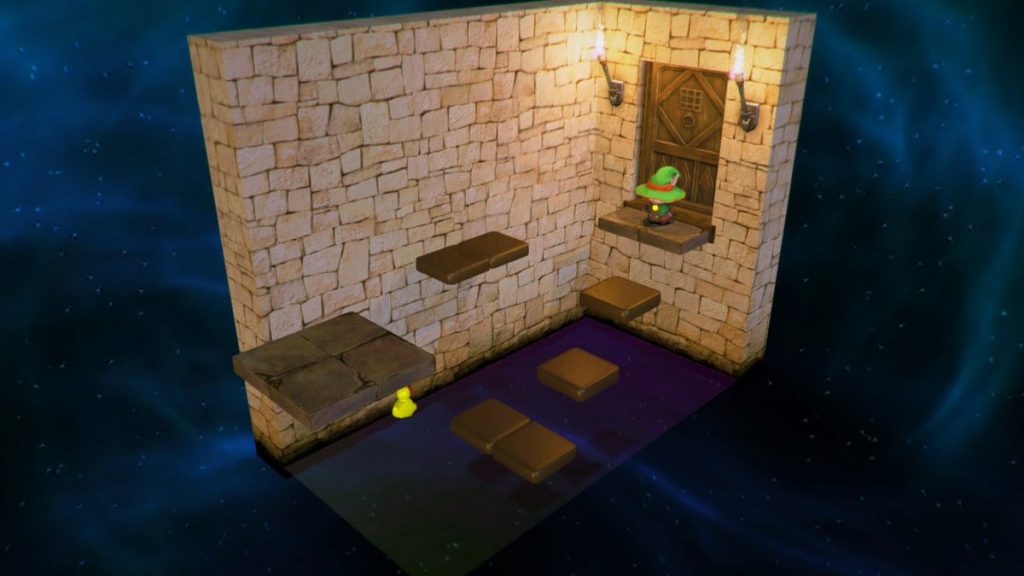 That rubber ducky may be having a good time down there, but you won’t.

I’ll be honest with you; I have mixed feelings about Lumo‘s gameplay. Yeah, I know, that’s kind of a doozy of a thing to say in the beginning. Just give me a minute to explain, though. For the most part, I actually think that this game does a good job. Most of Lumo‘s gameplay is comprised of platforming. Not just any platforming, though — isometric platforming. While the platforming genre is still very much alive and well, presenting a platformer in an isometric manner has kind of gone by the wayside. Why? Well, because they’re isometric. Although they may look neat, and may have been innovative for a time, isometric platformers are really good at messing with your depth perception. Because of that, you’ll probably end up messing up more than you would on a traditional 3D platformer.

Lumo seems to be aware of this fact, and does its darndest to not mess with players’ depth perception. And, to their credit, they did this pretty well. Sure, I had the occasional slip-up here and there because I mis-judged how far away something was. Most of this gameplay’s difficulty, however, comes from genuine challenge. If you find yourself dying in a particular area, it’s probably you and not the game. The fact that the game favors an almost Metroidvania-like setup over traditional levels, and grants the player infinite lives (unless you’re playing in Old School Mode) also means that you can practice as much as you’d like if you’re having any difficulty, and won’t have to worry at all about losing progress. Having infinite lives does tend to make the game a little on the easy side, though. 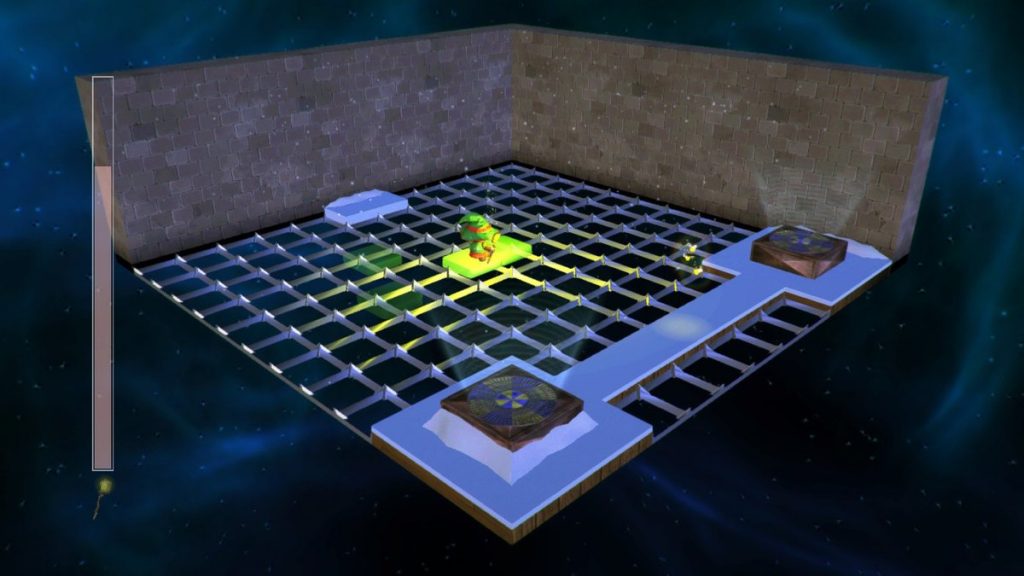 Your staff’s energy drains quickly — be sure not to dawdle!

Lumo also does a good job breaking up much of the game’s tedium by adding in a variety gimmicks, the most notable one being the staff that you pick up partway through your journey. And before you ask, no, you won’t be using the staff to fling fireballs at foes. Instead, the staff, when activated, is used to find hidden platforms. Be wary that these platforms aren’t invisible, but magical. If your staff runs out of juice, you’ll no longer be able to light up hidden platforms. And if you can’t see it, it isn’t there. Fortunately, Lumo‘s good about making sure that you don’t run out of energy too often. So long as you use your magic sparingly, you’ll be fine. Even if if you don’t use it sparingly, you’ll still probably be fine. Lumo‘s nice like that.

Although Lumo does its best to throw curveballs at you, it still might not be enough for some players. That’s where the collectibles come in! Eagerly preying on the fact that most of its player base will probably consist of completionists, Lumo isn’t at all shy about scattering a number of optional (yeah right) items in hard-to-reach places. Furthermore, each collectible takes a different skillset, such as the 30+ rubber ducks requiring the player to use advanced platforming skills, and the cassette tapes requiring the player to search every nook and cranny for invisible doors. Finding all of the collectibles is a little maddening, but that’s also part of the fun.

A Blast from the Past 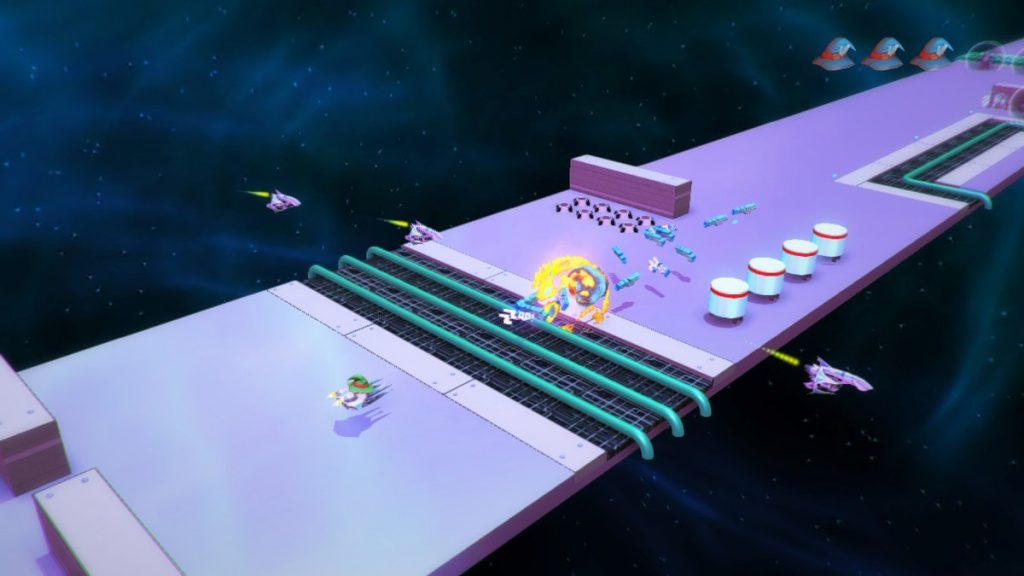 Isometric platforming may be Lumo‘s bread and butter, but it’s not the only thing that the game has to offer. Hidden throughout the game are warp points that will take you to a special area (provided you’ve collected enough coins to pay the toll) with six branching paths, each of which leads to a special level. Rather than featuring more of the same thing, each of these bonus levels are based on various games that were popular during the 80s — such as Zaxxon and Marble Madness. While they’re not exact replicas (for obvious reasons), these levels do an excellent job of mimicking the games that they’re modeled after. They’re also a lot of fun to play.

Remember when I was complaining about how this game was too lenient when it came to you messing up during the platforming sements? Well, we’ve got the exact opposite problem here. If you lose, you’ll get kicked out of the bonus area. That wouldn’t be a problem if you could just go back in, but you can’t. Each special warp can only be used once, and there are a very limited number of them hidden throughout the game. This basically means that the entirety of this area is a one-and-done deal — if you can’t complete everything the first time, then you probably won’t complete it all in one run — a shame, considering how well-made each of the game’s bonus levels are.

Worth its Weight in Quarters

As a modern-day homage to the Golden Age of Gaming, Lumo manages to put a refreshing and contemporary spin on a number of the wonderful retro games that so many remember fondly. And it manages to do so while still being inviting to those who weren’t around to experience those glory days for themselves. Lumo may not be perfect, but that doesn’t stop it from being an enjoyable journey down memory lane — and that’s what matters most.

Full disclosure: This review is based on a copy of Lumo given to Hey Poor Player by the Publisher 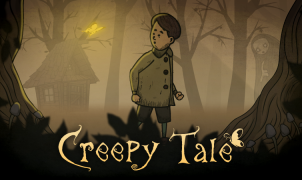