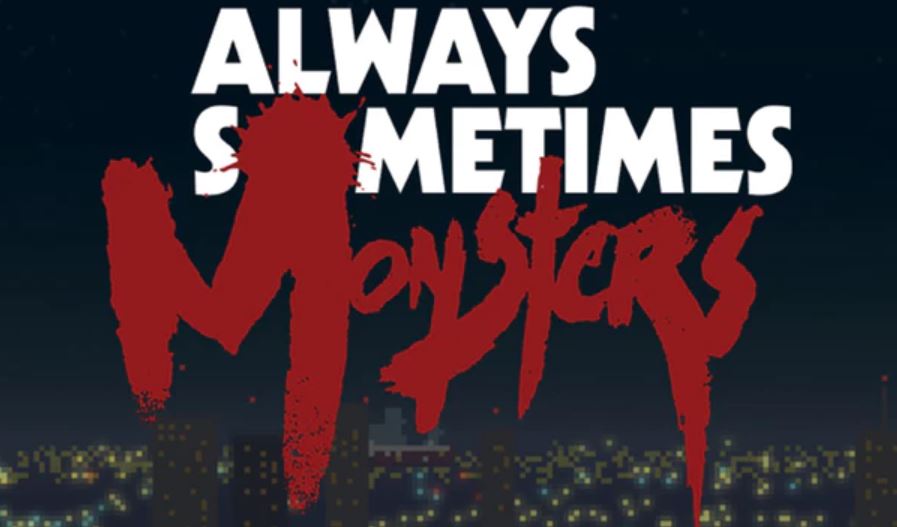 Have you ever hit rock bottom? No, I mean, really, really hit rock bottom? You’re penniless, everyone seems as though they’ve turned against you, you’re sleeping rough and the love of your life is, well, no longer in it? I can safely say that this hasn’t happened to me. At least, not until I played Vagabond Dog’s beautiful 16-bit RPG, Always Sometimes Monsters. But whether we’ve been there or not, Always Sometimes Monsters makes you believe you have and puts you through a series of emotions and situations that can be uncomfortably raw, yet exhilarating.

Always Sometimes Monsters places you in the shoes of a writer who’s at a party where they have to impress the publisher who’s hosting it. What’s really neat is that you can select who you play as by choosing to strike up a conversation with one of the twelve playable characters that are mingling in the background. Even better, once you choose who you want to play as you get to pick who your significant other is too – race and gender don’t matter whatsoever, pick who you want. And hey, when you ask the host, Larry, if he would do the honours of helping you be published, what do you know? He accepts.

Fast forward six months later, you’re now the unlucky writer who’s ex-partner is getting married – and in some cruel twist of fate, you’re invited! You only have 30 days to get your way to the wedding and boy, some of the things you have to do aren’t pretty.

Oh, did I mention even before you can get going that you’re behind on rent and are going to get evicted if you don’t give the rent money soon? Playing through the first thirty minutes of this whole scenario genuinely made me feel as though I needed to do anything to get that money, and me, a person who can’t be mean to video game characters at all, suddenly lost all my morals in my desperation to both survive and save up to get to that wedding!

That’s what Always Sometimes Monsters is all about though. There’s always a lingering question of ‘what will you do when pushed into a corner, what choice will you pick if all you’re going to do is hurt someone?’ and it is both haunting and reflective. I genuinely struggled to choose between some of the options, especially the one option involving your best friend Sam and a certain journal. That’s life though, isn’t it? A struggle – a message that I believe Vagabond Dog wanted to get across from the get-go. 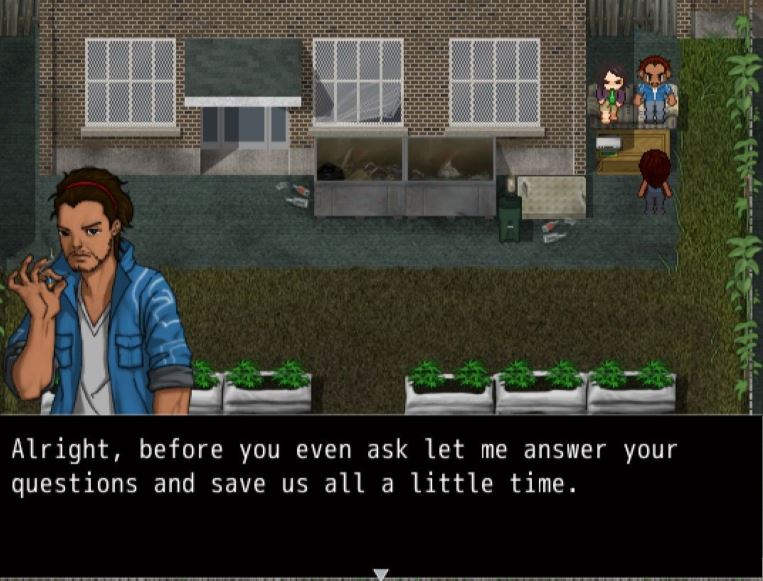 Controls in this game are simple enough, most of the time you dedicate yourself to finding any possible way to get money and once you’ve finished that, scrounge up any possible meal you can. If you’re like me, you don’t manage to get your rent money in time you pretty much end up homeless – not fun, at all.

What’s even less fun are the jobs that you take on in order to earn as much money as you can. In the first town you get two options, a factory job canning meat (which gives you a fair bit of money) or another factory job canning vegan products (which gives you a significantly less amount of money). Neither of them are particularly fascinating nor does it take much brainpower to do it, you mostly just move the analog stick, press X and away you go. It’s incredibly boring, tedious and frustrating when you somehow manage to get it wrong. It’s mindless work and I feel as though that’s the point of the entire thing in the first place. It’s what you gotta do to eat, after all. Still, if you’re looking to get money in Always Sometimes Monsters, don’t expect a ton of fun from that aspect.

(Unless you find bagging marijuana fun, then, uh, you’re in luck!)

But seriously, there’s not a lot of variety in the controls. Sure there are some mini-games thrown in now and then to stop gameplay from being completely repetitive, but the most action you’re going to get is walking around and selecting the thing you want to say or do. But frankly, that is to be expected about an RPG like Always Sometimes Monsters, choices. And there is more than enough of them. Some of them matter, some of them don’t. Some of them you may not even think will matter but, later on, ends up costing someone their life in the long-run. There’s, of course, a chance you can reload but I didn’t see the point – the game wanted me to live with my awful choices, and so I did. It was awful, but also necessary in order to get the money I needed to serenade my ex-girlfriend back into my arms at the wedding.

Speaking of choices, finding out my sexuality, as a lesbian woman, affected the world of Always Sometimes Monsters was particularly awesome. Sure the slurs thrown at my character wasn’t great but it was refreshing to be seen in this crazy old world by Vagabond Dog, never mind to have the world around me affected by it. It got to the point that with each interaction I had with different characters I was waiting for something, not even something like “you’re a big ol’ lesbian, right?” but just, waiting, to see what would react to my sexuality (and let’s be honest, gender) next. It was kind of exciting and I applaud Always Sometimes Monsters for making each interaction so significant.

The good, the bad and the unplayable… 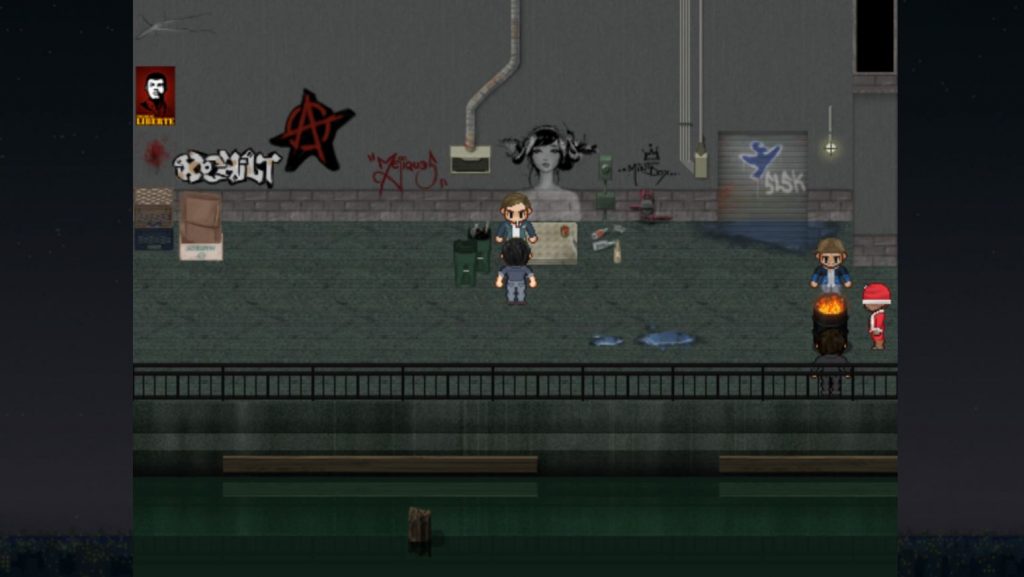 As expected from a 2014 port that was recently put on PlayStation, there are some ‘issues’.

Again, talking about choices leads me to a point where choices actually meant a whole lack of choices. As I’ve stated previously, mini-games were introduced to stop the gameplay from getting completely tiresome however there was a major issue with that, at least in the PS4 version of the game. I was unable to play any of the arcade games after a minute or so playing them, there was one in particular that played much like Pac-Man, yet I could never complete it because it would just freeze, then crash. It was ridiculously frustrating to the point that I just didn’t play anymore and continued with my objective. Which, while fun, became repetitive to the point I just wanted to keep the story going as there was nothing else to do.

Now it can’t be easy to port this game to PS4 and I’ll give Vagabond Dog their due, it’s a pretty decent port. But you can tell it’s a port. As I’ve mentioned with the arcade games, some things just don’t seem to run right on the console, such as sound. Sometimes it would go deathly silent to the point I checked my headset, tried another game and then went back to see that there was still no sound. This happened mostly at the end of the game, which was a shame as it occurred during one of the tensest parts and near ruined my immersion. There was also a particular bug in Beaton where my character would just disappear off the face of the earth – BUT I could move around the map and hit into invisible walls. I had to restart the game at one point because I could not for the life of me get my character to reappear, thus made the game lose a lot of momentum in terms of pace for me.

And frankly? It’s a damn shame because the game is enjoyable and still as relevant today as it was when it first came out in 2014.

It’s not the first game to deal with poverty, homelessness, capitalism, racism, homophobia and all that other jazz, nor do I think it will be the last game to deal with it. But, despite the problems that sadly dampened my enjoyment, as a whole I can genuinely say it was an endearing game to play this year where the world is so very uncertain and troubled.

Ultimately it made me think about what the game was trying to tell me. The title should make it obvious enough, but it really hit home at a particular conversation you have during the last few moments of the game. Either the hitman or yourself say to the head honcho “like you could easily make the same choices I do,” and it hits the nail on the head about the heart of Always Sometimes Monsters. We all make judgements of people, it’s in our nature, but if pushed to the cusp of hopelessness like the player character – what’s to say we wouldn’t lose ourselves and morality?

Because you’re always going to be a monster to someone, no matter how hard you try.

Full disclosure: This review is based on a retail copy of Always Sometimes Monsters.