Rebellion’s classic shooter is starting to show its age 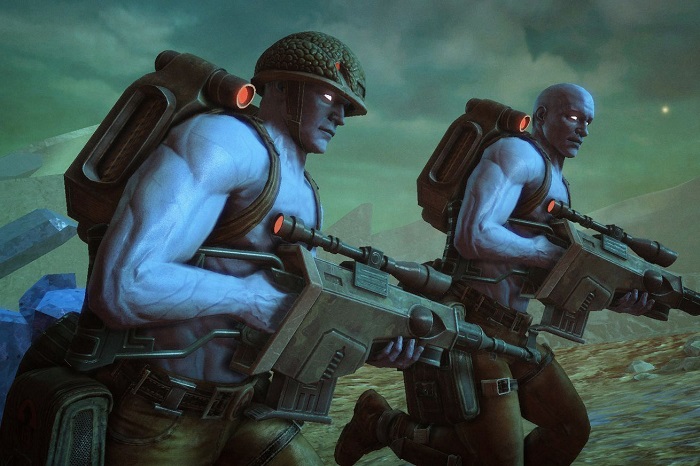 Rogue Trooper was an explosive, adrenaline-filled trek through a war-torn alien world when it first released back in 2006. Featuring a healthy mix of punchy gunplay and a gripping narrative, the game, based on Rebellion Developments’ 2000 AD comic property, largely delivered the goods. Now, over a decade since its debut, players can once again assume the role of a Smurf-skinned Souther super-soldier in Rogue Trooper Redux. Sporting a fresh HD coat of paint, this remaster takes aim to once again immerse players in its extraterrestrial tale of bloody revenge. But is it a story worth retelling?

Before we dig into the bloody blue viscera, here’s what you’re fighting for in Rogue Trooper Redux. The game drops players into the government-issued combat boots of Rogue, a genetically-enhanced killing machine custom built to wage war. Things kick off as Rogue and his squad is sent to battle the Nort army in Nu-Earth’s Quartz Zone region. However, shortly after the battle begins, a traitor betrays Rogue’s comrades. Within minutes, the Souther’s GIs are massacred by the Nort forces, leaving our hapless commando the sole survivor of his race. Now it’s up to Rogue to fight his way through the war-torn expanse of Nu-Earth and track down the one who betrayed his comrades to settle the score. 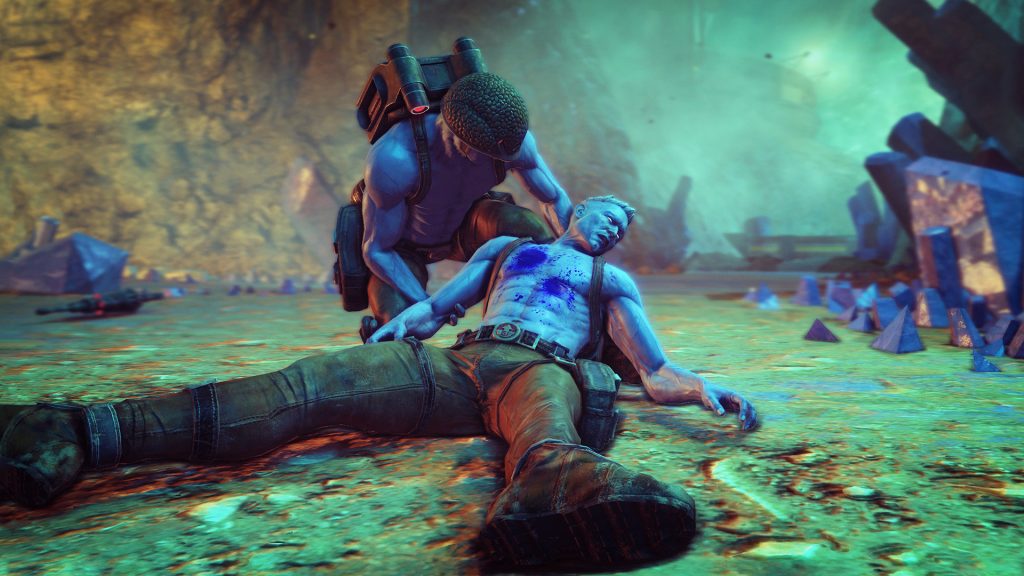 Death is just a minor inconvenience for Genetic Infantry.

Good thing for Rogue, death is only a momentary setback for a Genetic Infantrymen. Shortly after kicking the bucket, three of his pals manage to live on as sentient biochips which, after being slotted in his gear, grant the player new abilities. Bagman is slotted into Rogue’s backpack and can use salvage to craft ammo, health packs, and new weapons; Helm can hack into enemy computer systems and project a decoy hologram to attract enemy fire; Gunnar enhances your aim and can be converted into a handy sentry turret for added firepower.

Every stage is filled with ample opportunities to take advantage of these skills. Snipers got you in down in the dumps? Bust out a decoy and hit them while they’ve got their sights on your glowing blue doppelganger! Need to lay down some suppressing fire on a platoon of Nort scum? Your turret can put the squeeze on baddies and thin the herd. I had a lot of fun experimenting to find the perfect combination of tools to solve a particular showdown. And watching Rogue’s humble toolset develop over the course of the game’s 10-hour campaign is really satisfying.

Of course, what good is a shooter without guns? While your arsenal of weapons in Rogue Trooper Redux isn’t particularly large, it gets the job done. You’ll start the game with a pistol and a rifle. Still, before long, you’ll get your mitts on other genre staples like a shotgun, beam rifle, surface-to-air missile launcher, and a mortar launcher. Additionally, you’ll get access to a wide variety of grenades to blast your enemies to bits. Sapper grenades are my favorite. You can use these to temporarily knock out mechs and drones, giving you the chance to sneak on by or get in a few cheap shots. 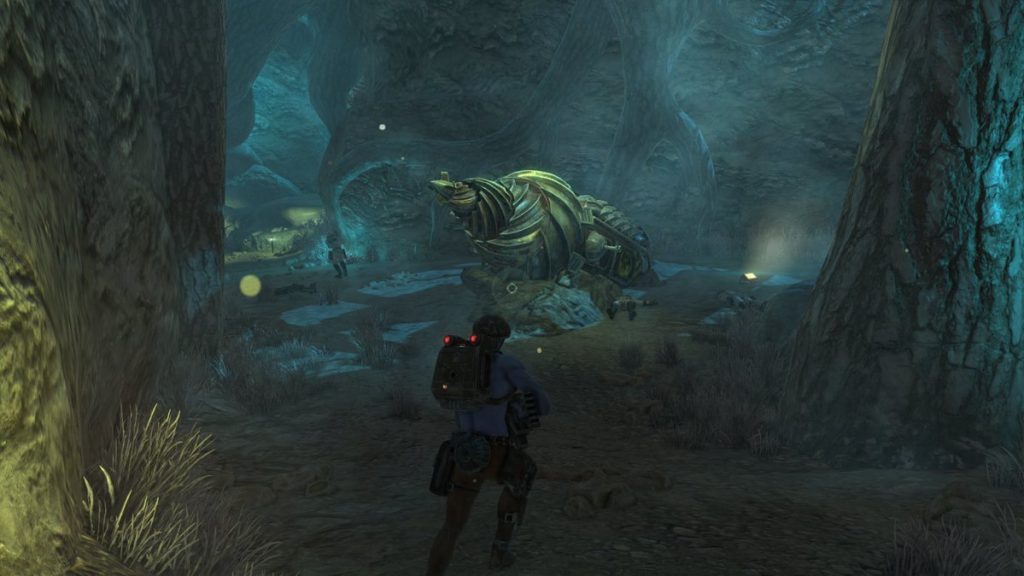 Over ten years since its original release, Rogue Trooper‘s shooter gameplay is starting to show its age. This is especially true when it comes to its gunplay. Though it may have felt punchy and satisfying in 2006, the shooter genre has seen much refinement over the past decade. With modern releases like Gears of War 4 and Uncharted offering smooth, gratifying gunfights, Rogue Trooper Redux’s stiff and weightless combat falls flat in comparison. Even the game’s most memorable setpiece moments, like downing fleets of enemy gunships from atop a speeding train or soaring on a gunship through alien valleys, do little to spice up the boilerplate action and predictable level designs.

To make matters worse, the game’s enemy AI is wildly inconsistent. There were many times I was able to gun down baddies while their pals stood idly by, ignoring the bloodshed. Other times I’d be spotted by a lowly grunt, only to find the entire base was now instantly aware of my location and breathing down my neck. There is a stealth system available, complete with silent takedowns. But given the enemy’s random AI behavior it’s hardly worth even trying to sneak around. Your best bet is to just hang back with your sniper rifle and try to pick off as many enemies as possible before moving ahead. 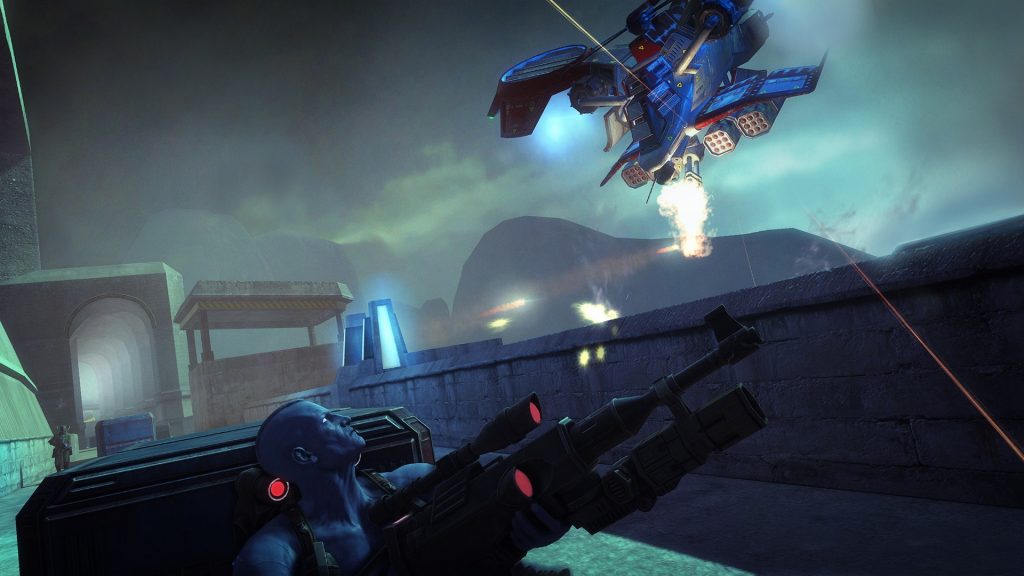 Rogue Trooper Redux introduces a number of enhancements over the original game. These updates include revamped HD graphics, remodeled assets, and improved lighting effects. Additionally, the once-cumbersome cover system has received some minor tweaks to make it a bit more manageable this time around. While these changes sound great on paper, sadly the end result leaves a bit to be desired.

Without question, the improved character models look significantly better than they did originally. Still, they’re a far cry from what you’d expect from a modern release. The overhauled models also draw attention to the barren, lifeless environments more than ever. Lacking any interesting geometry, they underscore just how far video games have come over the past ten years. And those enhanced lighting effects I mentioned? Well, they were so subtle that I hardly noticed them during my extensive time with the Switch version of the game. At least it managed to run smoothly without any real dips in performance, both docked and undocked. So that’s a plus!

As for the overhauled cover system, it really does feel snappier and more responsive than it previously did. However, blind fire is woefully inaccurate (go figure), almost to the point of being useless. This can prove to be annoying. Especially when you consider the fact your health can be decimated in just a few lucky shots. It’s still an improvement though, for what it’s worth. It’s just disappointing that other mechanics, like blind fire and enemy AI, didn’t see a similar overhaul. Swapping weapons is also much more time consuming than it should be, and tossing grenades feels akin to chucking a lead weight.

Gunning for your nostalgia

Don’t get me wrong – Rogue Trooper Redux isn’t a bad game. However, it is hobbled by some dated mechanics that are hard to ignore. A standout title in its heyday, Rogue Trooper really underscores just how far the third-person shooter genre has come in the decade since its original release. And while the game’s HD facelift is certainly welcome, it’s not enough to distract from its weightless, imprecise shooting mechanics and middling stage designs. However, if you don’t mind the rough edges, Rogue Trooper Redux is a nostalgic throwback to the genre’s early days which, despite all its flaws, manages to tell an entertaining revenge story.

Full disclosure: This review is based on a copy of Rogue Trooper Redux provided by the publisher.