A Tale of My Frustration 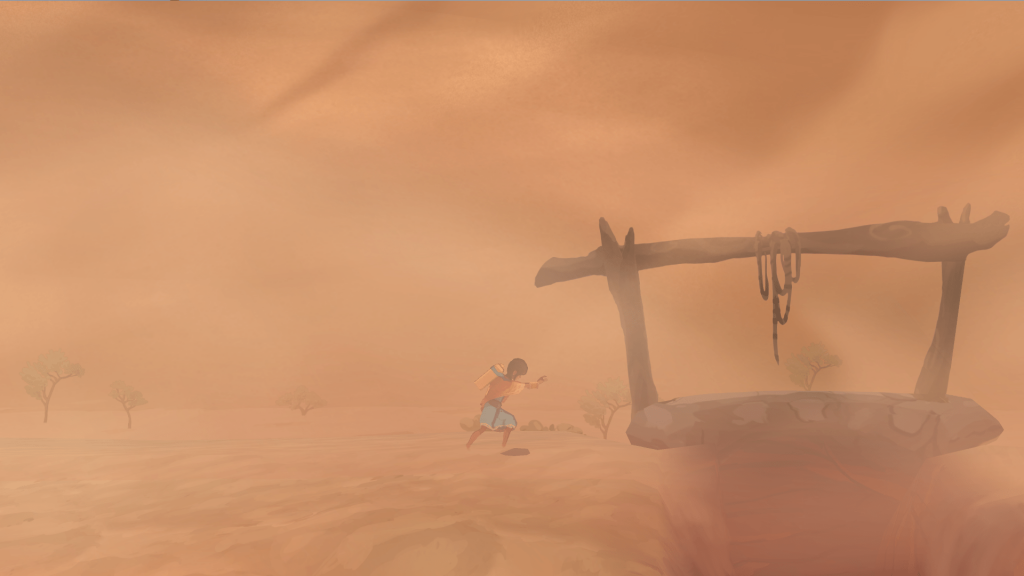 Ayo: A Rain Tale is a game whose setting is a largely unexplored and underrepresented one in video games. Africa, specifically the Sub-Saharan region of the continent, has the rich potential to tell stories that would otherwise be unfathomable to those more accustomed to a comfortable first-world lifestyle. I was very much looking forward to playing Ayo, specifically because I think these kinds of stories need more representation and the developers have made it clear they wanted to talk about the struggle of many women in Sub-Saharan Africa. However, that being said, no amount of good intentions or an interesting setting can fix what is ultimately a very flawed platformer mechanically. While I tried to immerse myself in Ayo’s world, I was more frustrated than anything with the overall experience. 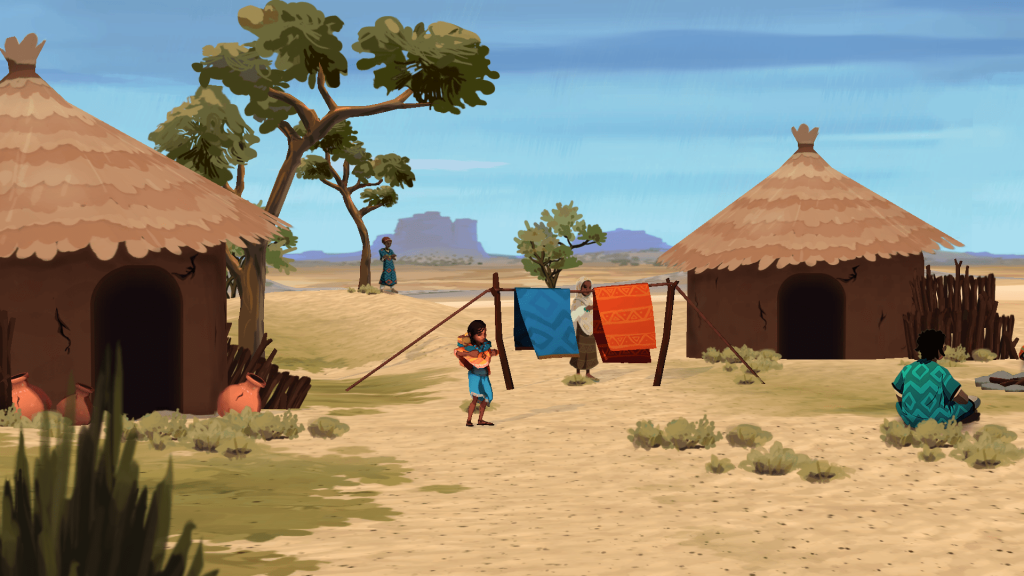 Ayo: A Rain Tale is rather basic in terms of its storytelling. There is some dialogue text to a small degree, but the game chooses to show rather than tell at its best moments. A Rain Tale starts off strong with a very simple opening cutscene introducing us to Ayo and her village. You see that Ayo’s family loves her very much and that the village as a whole is very close and familial. After a couple of well wishes sets out on to bring back her family drinking water. At its core, Ayo: A Rain Tale is a game about struggle and a journey. While there are a lot of fantastical elements, it’s very much about a small child who has to provide for her family. The game truly shines when these moments do occur, softening the gritty and dark themes that this story could have told. For the most part it stays bright and colorful in tone, and I thoroughly enjoyed it for that.

This tale’s biggest strengths are the art style and setting. The game’s overall visuals are very bright and colorful while maintaining a sort of earthy palette. This palette serves the game very well, really capturing the notable visual characteristics of Sub-Saharan Africa. The developers also did a very good job of portraying the culture of Ayo and her people, while also creating a visual experience that feels wondrous. And when the game does get into its more traditional influence the art shines more than ever.

All that being said, the in-game graphics and environments do not do the game’s great art justice. For a game with such an interesting setting, the backgrounds don’t show much life. They are the same kind of standard, repeating backgrounds that I would expect out of a platformer from the early 2000’s. To be fair, the backgrounds do look great at the latter half of the game, but the early stages backgrounds are dull. The objects and fauna in the game are also bland and recycled. There are far too many reused assets in the game, which makes going through levels a slog and feel like déjà vu. Lastly there seems to be a lack of polish in the animations. There is rarely a satisfying visual cue to acknowledge anything you do in-game or it is simply delayed, such as when stepping on an enemy. It all leads to a game that feels lifeless when not in a pre-rendered scene.

A Leap Of Faith 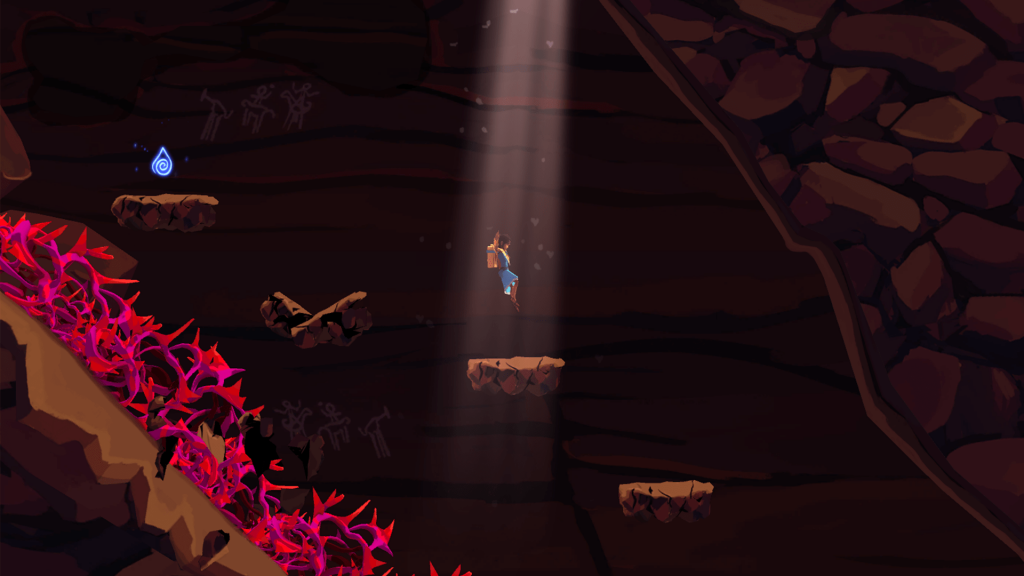 Ayo is a messy platformer that doesn’t feel satisfying to play through. When it comes to challenge in platformers it is important that the game is designed in a way that makes it feel like failure is your fault.  If you didn’t succeed in making a jump then the blame rests squarely on your shoulders, and not the fault of the game’s design or mechanics. Sadly, that’s not the case here. Ayo: A Rain Tale is way too inconsistent with its design and mechanics to be considered fair.

The various platforming challenges and puzzles are very simple and aren’t extremely difficult. There was never a challenge in-game that felt like I needed to think about it for more than a few seconds. This ease in difficulty may be to highlight the story or experience, but it feels far too by-the-book and the lack of many story beats really contradicts this notion. There’s rarely a sense of satisfaction in progressing because the game’s level design is extremely cookie cutteresqe. Now, while the process of figuring out the platforming challenges isn’t difficult, the act of executing them is.

One of my biggest complaints of this game is the camera panning. The camera is usually focused on Ayo and whatever is vertically upward from her, allowing you to platform to higher places much easier. This is the opposite, however, when dropping down. When Ayo drops down vertically the camera pans far too slowly, often having you wait for it to catch up to where she lands. Another side effect of this is that you cannot see what’s far below Ayo, even if you must drop down. This led me to many scenarios where I couldn’t tell if I should take a leap of faith or not. This was such a frustrating thing to deal with because on top of all of that, Ayo does die from fall damage. 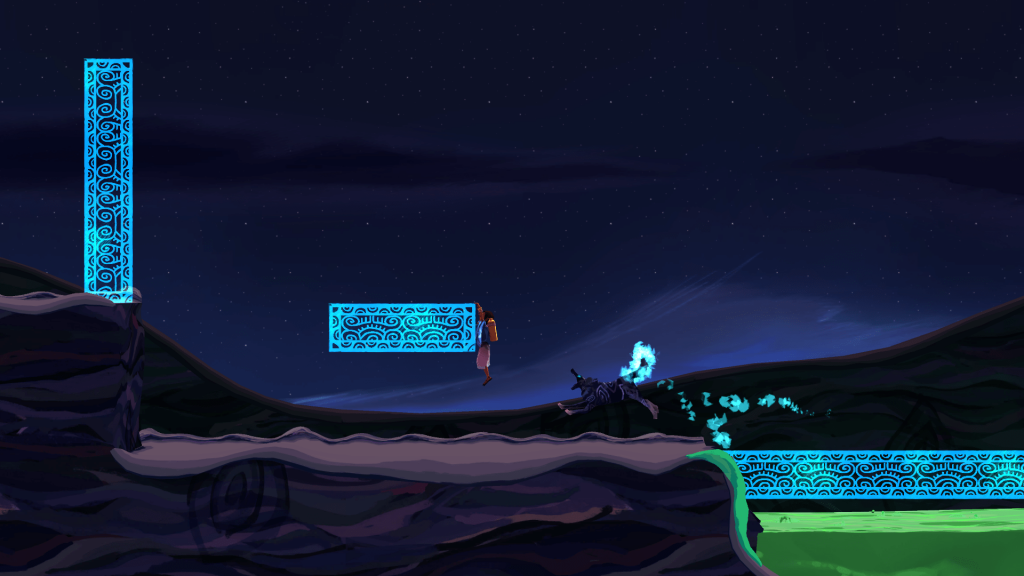 This title has a serious case of what I like to call “magnet hands.” As in Ayo will latch onto a ledge automatically as long as you are within a certain proximity of it, which sounds normal except it is an extremely forgivable distance. There are many instances where it seems like I shouldn’t grab onto a ledge but I do. Another strange mechanical quirk is that Ayo can change her direction and momentum while in the air. Now these mechanics don’t sound bad, but when you compliment them with the poor cookie cutter level design then it all makes sense.

Ayo’s movement and actions are so forgiving, because she needs to accommodate the level design and not the other way around. There are ludicrous amount platform placement and distance, so Ayo’s “magnet hands” and aerial direction change are required to do achieve anything. On top of the weird platforming design, the actual assets are kind of deceiving as well. The hitboxes and where the object starts and ends doesn’t correspond to its model, leading me to times where I thought I could grab something, but couldn’t. There were too many moments where I wondered if I could make a jump or grab onto a ledge – in a frickin platformer.

I wanted this game to be good on so many levels. The art is great, the music has personality when it is there, and the message the game is trying to portray is one of serious importance. All that being said, this is not a fun nor enjoyable game to actually play through. Regardless of the message the game needed mechanics and design that complimented the overall themes and tone of the title, but unfortunately the game is far too inconsistent and generic to make this anything truly memorable. This game may be a tale for another day.

Full disclosure: This review is based on a Steam review copy of Ayo: A Rain Tale given to HeyPoorPlayer by the publisher.