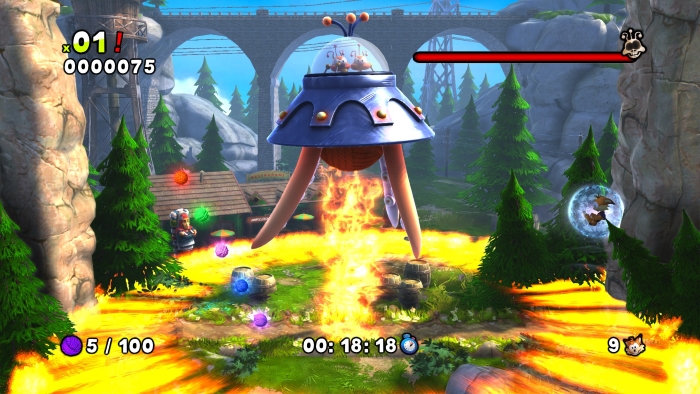 I have a confession to make. I enjoyed the original Bubsy all those years ago on my Mega Drive. Though by no means the best game I ever played, it was nonetheless a solid platforming experience and a reasonable challenge. So what if the controls felt like the D-pad was stuck? And so what if the Bubster himself kept cracking painfully unfunny jokes? It still had a charm all its own. As the years rolled by, it became the punchline to a joke as unfunny as something Bubsy would utter; a joke on the bygone era of anthropomorphic mascots with attitude. So when a new game was announced earlier this year, most of the game world rolled its eyes and went on to focus on other topics. But not me. I was keen to see the wayward bobcat redeemed. Was The Woolies Strike Back up to the task?

The Woolies Strike Back seems to discount all Bubsy games after the first one, and perhaps that’s for the best. The titular Woolies – a malevolent alien race obsessed with, of all things, yarn – have returned to Earth to once again deplete the planet’s supply of wool. More to the point, they’ve got their eyes set on Bubsy’s Golden Yarn, which has granted him considerable riches. Ultimately, though, it’s merely a tale of revenge between our benevolent bobcat and the conjoined leaders of the Woolies, the twin queens Polly and Ester. Yes, it’s terribly punny and yes, you can expect such jokes throughout the game. It never stops. 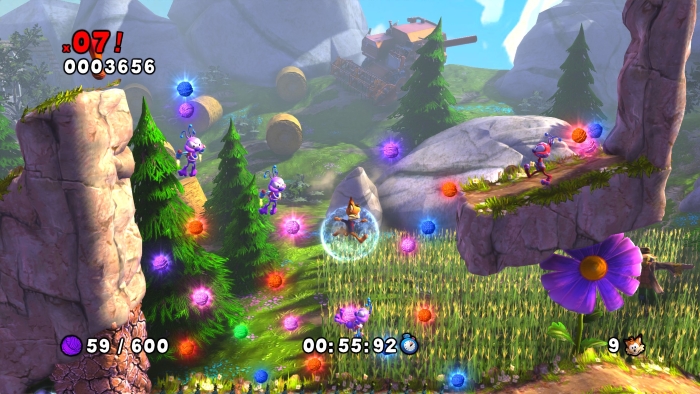 The game follows on the heels of Giana Sisters: Twisted Dreams, having been developed by the same company and sporting the same engine. Indeed, upon first glance, the similarities are very noticeable. Bubsy’s controls are far closer to the Giana Sisters than the original Bubsy, meaning that he’s actually far more responsive and doesn’t yaw to one direction like he did previously. Also, he no longer suffers from falling damage! This was a chief criticism in the original games, and Bubsy himself even breaks the fourth wall to comment on it.

Jumping and gliding are accounting for, but there’s also the addition of a pounce maneuver. It takes a while to get used to, and isn’t really designed for an offensive application. You’ll find that you’ll pounce right over enemy heads whenever faced with them on a straight plane. However, as time goes on, you’ll find it best used to help reach secret areas and attack enemies at a distance.

Pulling the wool over everyone’s eyes. 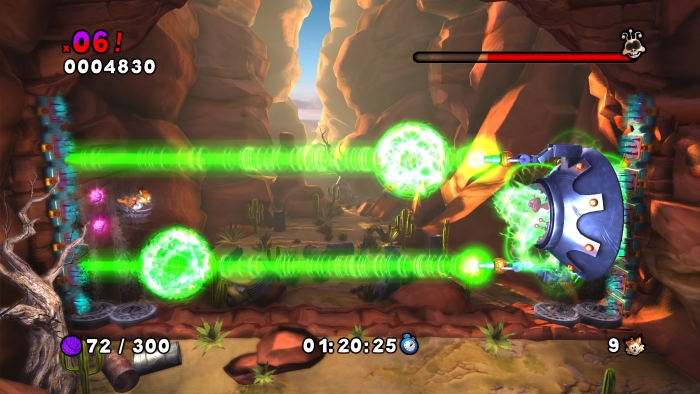 The formula is Mario 101. Gameplay is running, jumping on enemy heads, and collecting yarn balls much like coins. Events never get too difficult, but precision platforming and pouncing are expected from the player. A miscalculated stomp on an enemy’s head can result in death very easily. Players are encouraged to collect massive stashes of yarn very rapidly in order to obtain a higher score. T-shirts function as shields and extra lives, while levels have five keys to locate in order to unlock a massive cage of yarn. You’re encouraged to replay levels to snag a good score, unlock the cage, and try to beat them without dying. It’s all accompanied by cute, if somewhat generic visuals. By far, the best part is the music. The soundtrack is a mixture of demoscene electro with some distinct euro influences, and is energetic and happy. It’s also available as free DLC and I suggest getting it.

What we have here is a competent platform game. Far more competent that the title character’s other excursions. But while it’s good, it falls short of being great. Bubsy continues to be a wise guy and cracks jokes nonstop, even more than before. It gets annoying before too long. And, most offensively, the game is a very short campaign clocking in at roughly three hours. Sure, you can replay old levels, but the price tag doesn’t justify the amount of content on offer. Or, lack thereof.

Bubsy: The Woolies Strike Back is easily the best Bubsy game ever. It’s a considerable improvement over the previous entries in the series, and is a well-designed and enjoyable little platform romp. Unfortunately, it drops the ball too many times to come wholly recommended. The asking price is steep for such a short experience, and somewhat generic level themes combined with the incessant quips really bring the experience down. After more than two decades, it’s good to have Bubsy back, but next time I hope he brings a rounded experience and learns to hold his tongue a bit. Because I really hope there is a “next time”. There’s a lot to work with here. Glide on over to its Steam page, though you might want to wait until it goes on sale before you add it to your library.

Full disclosure: This review is based on a Steam key for Bubsy: The Woolies Strike Back given to Hey Poor Player by the publisher.