A Force to be reckoned with. 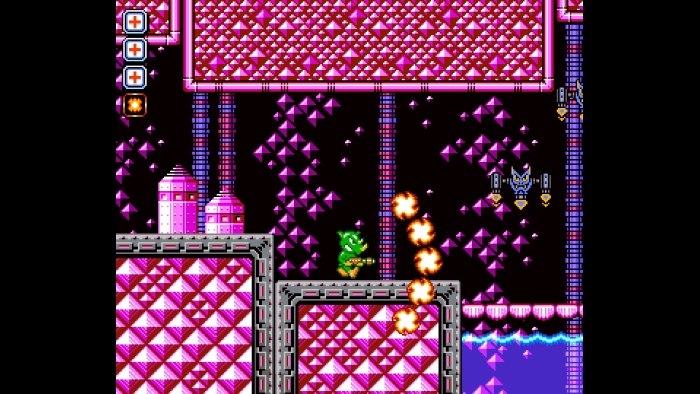 We’ve reached a sort of critical mass with regards to retro-inspired games. Things are now at the point where there’s almost as many retro-styled games as there are actual retros. But y’know what? That’s fine. That’s all fine. Keep them coming. They’re often a fusion of various styles, and each of them brings something new to the mix. Case in point, the faux 8-bit romp that is Clash Force.

Clash Force puts players in the boots of one of three anthropomorphic animals, much like a Saturday morning cartoon. The interesting thing is, this bestiary is curated from a selection of the oddest and ugliest critters you’re likely to encounter: a rhino, a distinctly non-Sonic echidna, and (my personal favorite) a scorpion. They’re all very proficient in the use of futuristic firearms, which is a good thing, as a mad scientist has unleashed an army of destructive war robots and only our trio have the guts to take him on.

Clash of the Titans. 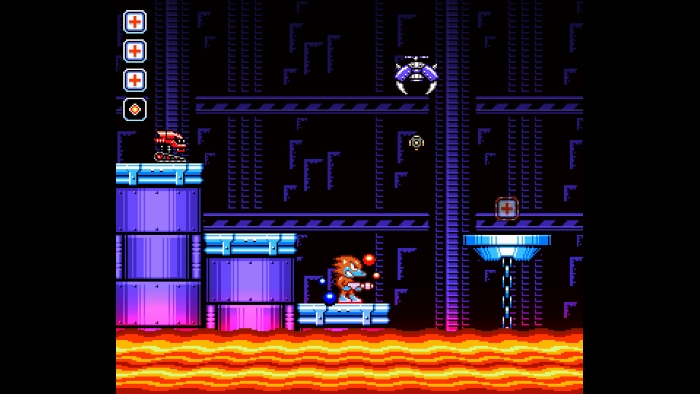 The game takes place over a series of small-to-medium sized levels. Their design is nothing too complicated, invoking fairly simplistic and flat design principles. There’s no elaborate vertical climbing and no intense exploring. You move along a single plane and dispatch enemies with your gun, all while avoiding projectiles and jumping as if you have ants in your pants. It’s all quite simple, easy to learn, and amusing to play. Particularly if you’re a fan of the Mega Man and Contra games, although it never comes close to reaching the same level of difficulty as those beloved franchises. Some stages mix up the standard formula by including gimmicks such as riding on a rail or a rocket in the sky. It’s refreshing and makes for a wonderful change of pace.

There’s a series of weapons available, and they’re all quite satisfying to use. Differing in spread and pattern, these weapon upgrades also have minor variations in their damage output, and are especially useful is dispatching enemies in otherwise hard-to-read places. Weapon pickups however are lost upon the player receiving damage, adding an extra incentive to make it out without a scratch. These pickups appear by destroying flying bots or are strewn about haphazardly, begging to be picked up by the player. Additionally, players may access a bonus round between stages, and have a chance to snatch a random power up or a shield pack, which essentially functions as an extra, fourth hitpoint. It offsets the difficulty a bit too much, but players are able to exit immediately if they so choose. Also, there’s a hard mode if you feel things are too simplistic, and I highly recommend at least one playthrough in that mode to get your money’s worth.

Not to Force the issue or anything. 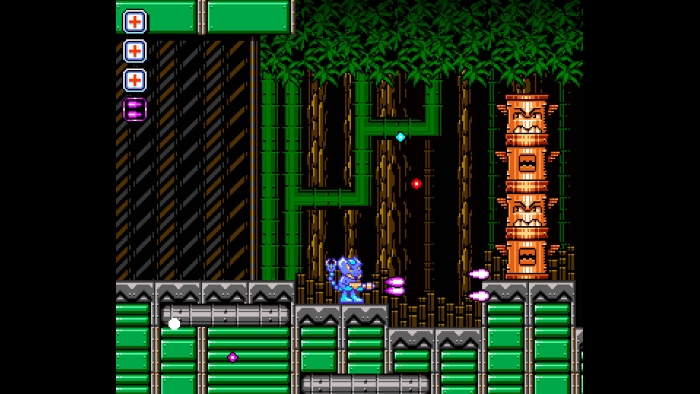 There are a few caveats to the gun mechanics, mind you. First, the game would have benefited considerably from an option to charge the shots and inflict more damage, much like in the later Mega Man games. This would have been especially useful against the more bullet-sponge enemies and bosses. Also, levels tend to have multiple gun pickups, and they overwrite one another in the player’s slot upon being touched. An inventory would have been immensely useful, and given proceedings a slightly more tactical edge. Also, a minor complaint is that players can’t fire upwards. It’s not game-breaking, but it does make the central mechanics seem slightly stiff.

As far as aesthetics go… you know what to expect by now. Clash Force is colorful, and upon first glance, seems like a NES platformer. Veteran Nintendo fans will notice a distinctly larger palette, though. Additionally, the screen is box-shaped to invoke the feeling of playing on a TV set, with the left and right parts cut down to size. On the audio side of things, sound effects are appropriately 8-bit, though the soundtrack is far more electro than chiptune. It’s decent enough, but not the finest I’ve ever heard. Nonetheless, it all comes together in a most charming package.

Clash Force is essentially the product of Mega Man mixed in with a liberal dose of Sonic the Hedgehog. It incorporates Mega Man‘s shooting gameplay and style of level structure with the creativity, look, and ease commonly found in the Sonic games. It’s not the deepest shooting experience you’re likely to have and it’s none too difficult, but if you fancy yourself as any sort of retro-style shooter fan, then you definitely need to give it a go. If that’s agreeable to you, then you need to shoot on over here to grab it.

Full disclosure: This review is based on a Steam key for Clash Force given to Hey Poor Player by the publisher.