Only the greatest tavern brawlers may enter the halls of Brawlhalla. 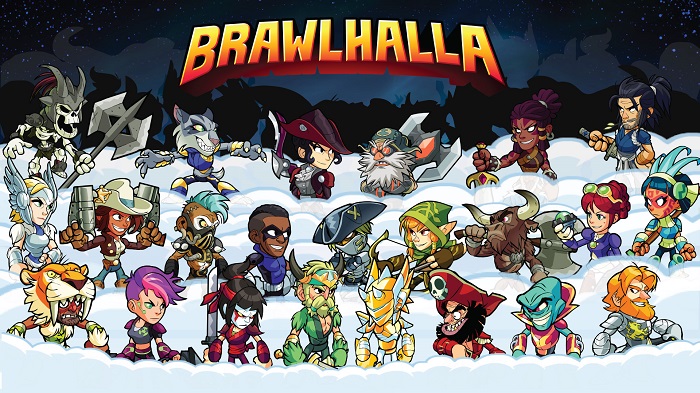 More than two years ago I attended MomoCon 2015, an anime and gaming convention hosted in Atlanta, Georgia. My primary motivation for attending was to window shop for anime figurines—Rise from Persona 4 stands tall on my shelf as a testament to my lack of restraint. I was surprised to see an impressive lineup of indie games showcasing fresh (if unpolished) gameplay at the convention. I took a break from weaboo hell to give the most promising among them a chance, and Brawlhalla was the first to catch my eye. Blue Mammoth’s booth had more flair than any other and a small crowd had already formed around it. An attendee invited my roommate and I to play a couple matches, and we jumped straight into an all-out brawl.

Ever since then I’ve wondered what the game is like now. So when code for a few extra goodies and a chance to review Brawlhalla came up, I seized the opportunity immediately. From the game’s Steam page alone I noticed that the small handful of characters available in 2015 had grown into a formidable collection of legends. When I actually started digging into Brawlhalla‘s nuts and bolts, however, I began to notice how similar it is to its prior self. There’s certainly no shame in sticking to a strong core concept and polishing it to a shine, but Brawlhalla may take that a step too far. 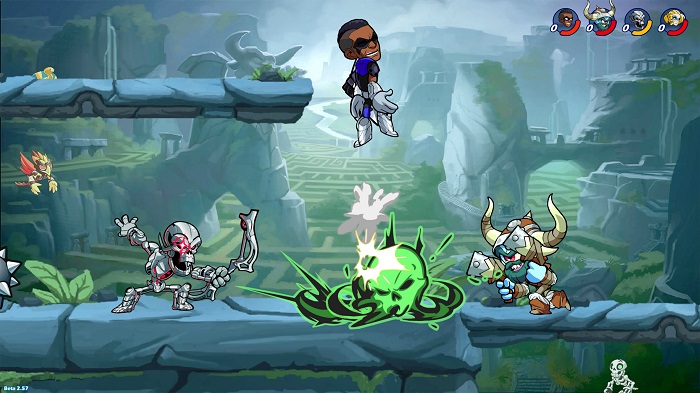 A smashing good time with friends and family.

Brawlhalla borrows heavily from Super Smash Bros. in its basic gameplay. There’s plenty of 2D platforming action and wide-stretching stages, while healthbars are replaced by a damage meter that makes characters more vulnerable to knockbacks. Brawlhalla seeks to differentiate itself with a greater emphasis on weaponry and a smaller, more balanced pool of items. Right off the bat, each character is nearly identical; only when they grab their weapons of choice does each brawler emerge as a unique identity. There are only a few select weapons classes (such as swords, bows, rocket lances, and the newly-introduced cannon) but each character uses these weapons differently.

On one hand, Brawlhalla‘s more balanced gameplay make matches feel fairer than the rock-paper-scissors style of games like Super Smash Bros. On the other, Brawlhalla fails to capture the unadulterated chaos that made Super Smash Bros. more of a party game than a fighting game for players who don’t have the time to get invested in a game like Street Fighter V. Blue Mammoth Games has made an impressive effort to promote Brawlhalla as a serious fighting game, but like its inspiration, the game is better suited for casual local play. 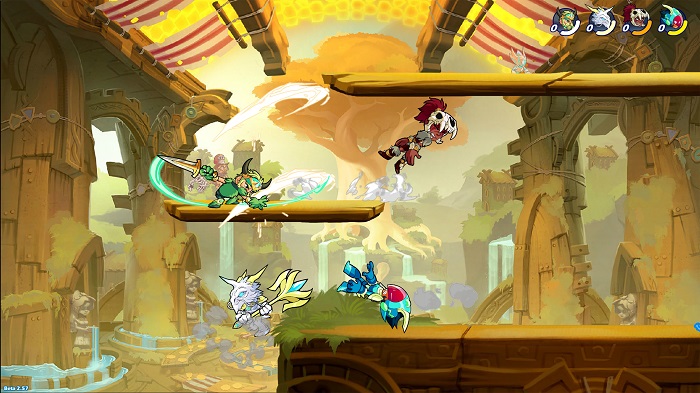 Brawlhalla‘s cost of entry is a mere zero dollars and zero cents. While the notion of playing a game for free is attractive, developers need to pay the bill too. Brawlhalla relies on Mammoth Coins, in-game currency that can be purchased with real money, to entice avid players to spend money on the game. Mammoth Coins can be used to permanently unlock specific characters or cosmetic items like skins, alternate colors, victory poses, and taunts.

In addition to Mammoth Coins, Brawlhalla uses Gold as an in-game currency earned through daily log-ins and the completion of daily quests. Gold can also be used to unlock characters, freeing them from the shackles of a weekly rotation. This means that particularly thrifty players can grind their way towards every brawler in the game without spending a dime. Cosmetic items are far more limited, however, as Gold can only purchase black and white color variants and seasonal combinations like the purple-and-orange Halloween colors.

The cost of cosmetics can add up to a staggering pile of Mammoth Coins. Each skin costs between 100 and 140 Mammoth Coins, depending on which are on sale at any given time. 1,000 Mammoth Coins can be purchased for $39.99, netting you ten unique skins at most. Most skins can be bought outright from the in-game store, but others are locked behind themed lootboxes.

Few titles have approached the fighting game genre quite like Super Smash Bros., blending 2D platforming action with traditional combo-based combat. While I would be tempted to suggest that Brawlhalla is put at a disadvantage because it lacks heroes as immediately recognizable as the Nintendo classics, the ill-fated PlayStation All-Stars Battle Royale proves that you need more than a handful of beloved characters to make a great game. Brawlhalla makes an earnest attempt to write its own destiny. Yet it remains under the looming shadow of Super Smash Bros., its presence on PC and PlayStation 4 its saving grace. If you’ve been looking to shelve your Wii U but Smash 4 has been holding you back, maybe you should give Brawlhalla an earnest shot.

Full disclosure: This review is based on the All Legends Pack and 500 Mammoth Coins given to HeyPoorPlayer by the publisher. 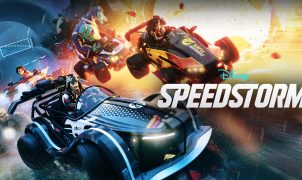 Race Against Disney and Pixar Icons in Disney Speedstorm