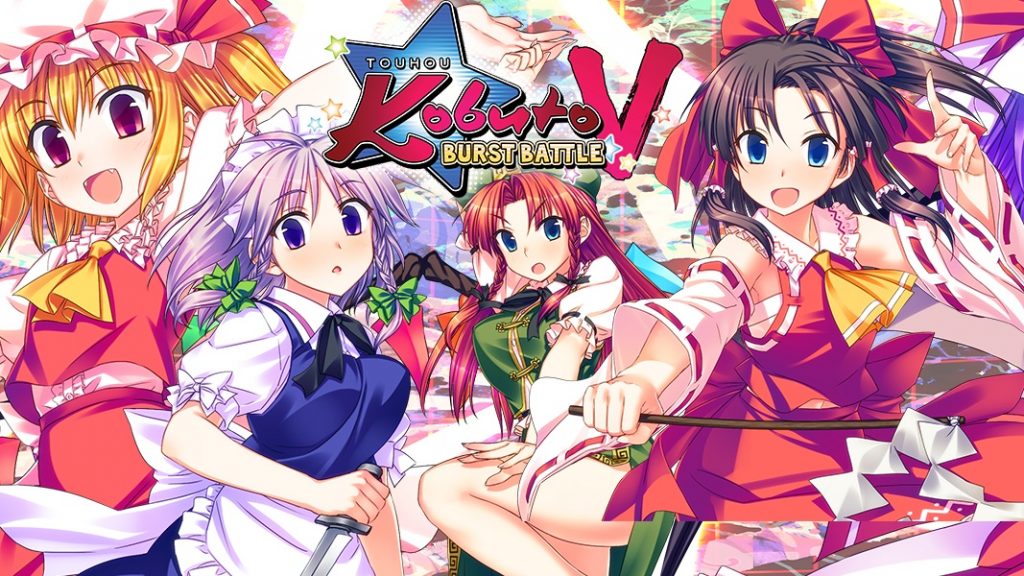 I feel like Touhou Project spinoffs haven’t been doing so hot lately. Earlier this year we saw the release of Touhou Genso Wanderer and Touhou Double Focus which, regrettably, weren’t all that great. And that’s okay. Not every game in a series is going to be phenomenal. There’s always the chance that the next game to come along will make things better. I’d like to say that Touhou Kobuto V: Burst Battle is that game. I really would. But I can’t.

A follow-up to last year’s Touhou Genso Rondo: Bullet Ballet, Touhou Kobuto V is a game that sits somewhere in-between 3D fighter and bullet hell. And it does so very awkwardly. I feel badly saying this, but I’m not sure how this game actually managed to mess up as much as it did Touhou is a series rife with ridiculous bullet hell games. There are several fighters within the series, too. And, while I know that CubeType is an indie developer, I still feel as though there was so much more that could have been done with this game.

As I mentioned in the last paragraph, Touhou Kobuto V is a very unusual mixture of genres. Essentially, I guess you could say that it’s a 3D fighter. Instead of featuring normal fighting mechanics, however, it’s got shoot-em-up mechanics shoehorned in. On paper, this is actually a pretty cool idea. If done correctly, a combination like this could lead some incredibly intense fights. It could also be a lot of fun. Unfortunately, neither intense fighting nor fun seemed to make it into the final product. 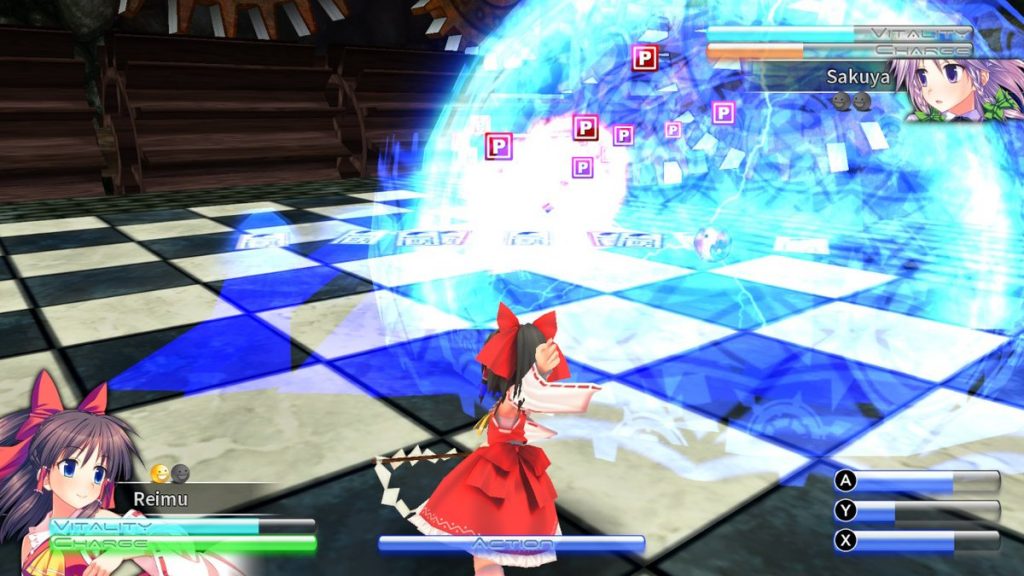 Characters may be diverse, but some are clearly better than others.

I know that I’m making this game sound less-than-stellar right now, but not everything is bad. In fact, the combat mechanics were just fine. Each of Touhou Kobuto V‘s 9 playable characters features three ranged attacks, three melee attacks, and one special attack, all of which feature a notable amount of distinction from one another (melee aside). In lieu of ammo, each attack has an energy bar, and a set amount of recharge time. Typically, more powerful attacks require more energy, so it’s important to make sure to have your enemy in your sights before firing. The special attacks need to be charged up by dealing damage and blocking attacks and can take a bit before they’re ready, so it’s especially important not to miss with these.

Sadly, there seems to be a balancing issue. It may be true that each of Touhou Kobuto V‘s characters are diverse, but they’re diverse in such a way that some are flat-out better than others. Lumia (or Rumia, I’m not here to argue), for instance, specializes in attacks that have a wide spread but do little damage. Marissa, on the other hand, is able to shoot lasers that take out about half of your opponent’s HP if they connect. Lasers with a pretty fast recharge, I might add. Those aren’t the only examples, either. Part of the fun in fighting games is all about figuring out new strategies and enjoying a balanced metagame. Without such balance in place, fighting gets stale and frustrating quickly. 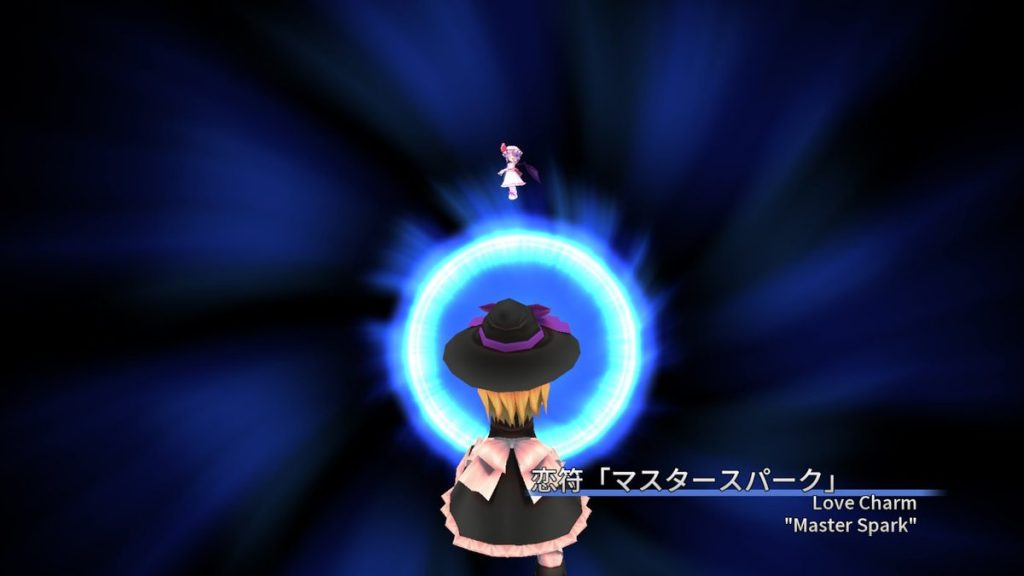 Here’s hoping that you know how to doge! No, wait, I want to hit you… never mind.

Of course, I still haven’t mentioned movement controls. In contrast with its passable combat controls, moving your characters in Touhou Kobuto V is an absolute chore. Characters move slowly and deliberately, making it easy to become a target. You can move quickly if you’d like by dashing, but this contains stamina. Stamina drains at a very fast pace and, once you’re totally out, your character has to stop for a few seconds to catch their breath. You would think that, since fluid movement is important in both fighting games and shoot-’em-ups, more time would have been spent on perfecting it. There’s no excuse for such clunky controls in a game like this.

Things go a little better in Story Mode. Touhou Kobuto V: Burst Battle‘s narrative-filled gameplay surrounds one the most dangerous things of all; gossip! One day while relaxing at her shrine, Reimu catches wind of a vicious rumor going around about her. It seems that, apparently, people have seen Reimu and her old pal(?) Scarlet causing trouble all around Gensokyo. A rumor is bad enough on its own but, on top of that, people have even stopped donating to Reimu’s shrine. The horror! Having heard enough, Reimu sets off to the Scarlet Mansion; determined to set things right no matter what. 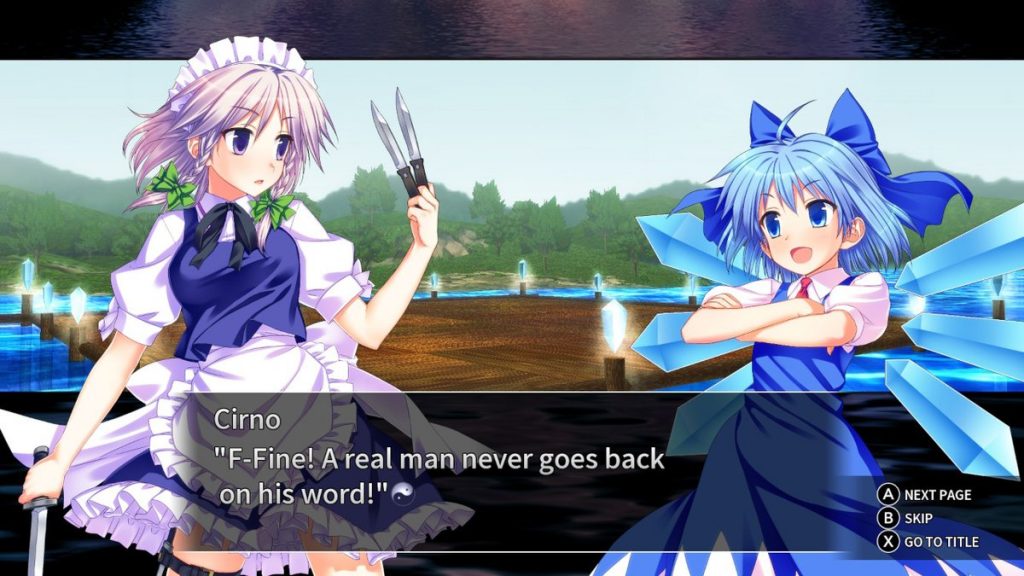 Touhou Kobuto V’s Story Mode is goofy and entertaining, regardless of which character you play as.

Interestingly enough, Story Mode actually chooses your characters for you for the first three runs. After playing through as Reimu, Marisa, and Remilia however, you’re free to choose who you’d like. I suppose that it makes sense from a story standpoint. Still, I don’t know that I’ve ever played a fighting game that makes me play as a certain character before allowing me to pick for myself. Touhou Kobuto V‘s story mode is what most Touhou stories are; cute, short, and full of inside jokes. There may not be much there in terms of storytelling, but watching the narrative unfold from different viewpoints was entertaining. Still, playful storytelling isn’t enough to counter low-quality gameplay.

A Little Something Extra

Along with Story Mode, and the obvious PvP and PvCPU modes, Touhou Kobuto V has a few other things for players to try. First, there’s Score Attack. Score Attack is a pretty typical arcade-type mode where players are given a score based on their performance. The better you do and the fewer hits you take, the better your score at the end of the round. In order to add some challenge, Score Attack doesn’t completely heal you between battles. And, since Score Attack only ends when you get KO’d, I feel like that’s pretty fair. Still, I can’t say that there’s much going on with this mode. Unless you’re trying to unlock Achievements, Score Attack is pretty passable. 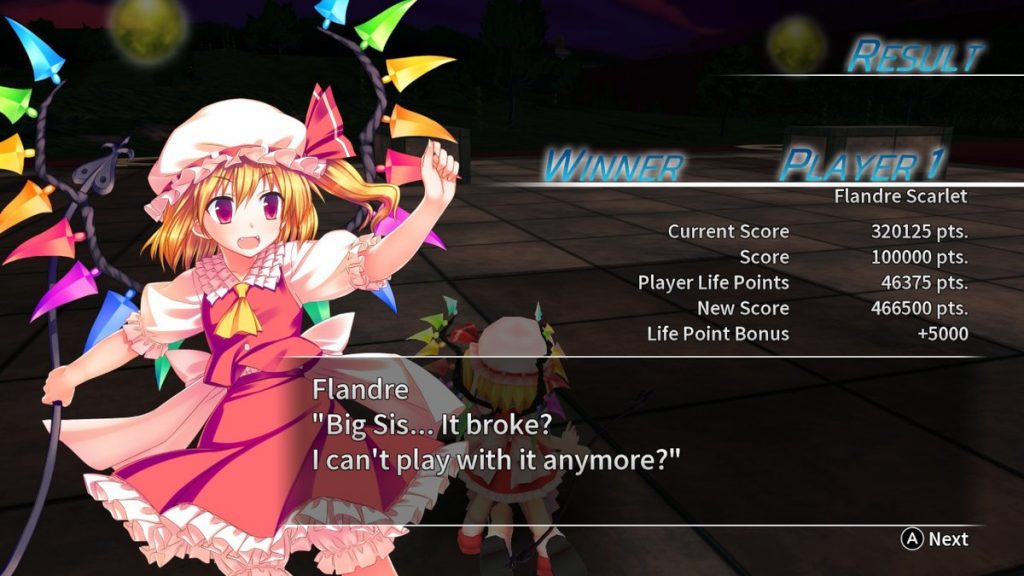 Simple or not, racking up a high score is always fun. For a while, anyway.

Touhou Kobuto V‘s other arcade-style mode is Arcade Mode (surprise!). Unlike with Score Attack, Arcade Mode only focuses on KO count. So long as your opponent gets knocked out cold, your level of skill doesn’t much matter. Other than that, it’s exactly the same as Score Attack. You face an unlimited number of opponents, and are only partially recovered in-between bouts. It’s a neat little addition but, like with Score Attack, is forgettable overall.

I’ve probably said this before, but I’m not normally one to nitpick graphics. Sure, I like things to look all nice and shiny, but a game doesn’t need to look amazing to impress me. With that being said, I’m not completely laissez faire when it comes to a game’s graphics. There comes a point where even someone like me stops to say “wait, this needs some more work”. I have hit that point with Touhou Kobuto V. The first thing that I thought when I saw this game was “wow, this looks like it should be on a smartphone”. I don’t think that I’ve ever thought that before. This is a game that has made it to the Switch, and PlayStation 4. PlayStation 2-era graphics aren’t really okay any more. …At least the 2D art is cute. (Seriously, they did a really nice job with that.)

Touhou Kobuto V: Bust Battle shows some promise. It’s got an interesting premise and, if properly executed, it could be a lot of fun to play. Unfortunately, “properly executed” isn’t a term that I could use to describe any part of this game (except for its 2D artwork, I suppose). I get that this is an indie title and everything, but if you’re planning on selling a game on mainstream consoles for $29.99 then you need to put more effort into it than this. If you’re a hardcore Touhou then sure, knock yourself out and pick this game up. Otherwise I would suggest that you pass on Touhou Kobuto V, and cross your fingers that the next Touhou spinoff comes out better.

Full disclosure: This review is based on a copy of Touhou Kobuto V: Burst Battle given to Hey Poor Player by the Publisher

HPP finally gets a chance to review Bravely Default II. Was this the best entry in the series? Or should it Default back to the past?