Gonna take you right into the danger zone…

When it comes to vertically-scrolling soot ’em ups, few franchises have endured for quite as long as Raiden has. Since its 1990 debut, the franchise has spawned five sequels and a number of critically acclaimed spin-offs over the years, including the incredible Viper Phase 1 and Raiden Fighters Jet. Now, to celebrate over a quarter century of high-flying action, developer Moss has scrambled the fighters once again to bring down an alien menace and save the earth from certain destruction with Raiden V: Director’s Cut. Introducing new stages to test your piloting skills and a new cooperative mode, this revamped sortie aims to deliver the definitive version of the 2016 shmup.

If you’re already a fan of the series, you’ll love what’s in store in Raiden V: Director’s Cut. The game comes packed with all of the explosive thrills fans of the long-running series have come to expect. So if you’ve got a soft spot for watching squadrons of alien ships explode when consumed by your lasso-like Bend Plasma or toppling giant walking tanks with volleys of devastating waves of fire from your Swing Vulcan cannons, this shoot ’em up’s got you covered.

As far as shmups go, there’s an awful lot to see and shoot here. With a campaign that takes players to such earthly locales as New York City, the Middle East, France, to the vastness of space and alien planet itself. Each of the game’s eight stages is broken down into two acts and is densely packed with enemies to blast to smithereens, points to collect, and massive bosses to topple as you try to climb the game’s online leaderboards (and save the world, if that happens to be your thing).

One of my favorite moments is a chase above the high seas as you try to scuttle a crystal-contaminated pirate ship bristling with cannons. Pulsing gunfire fills the air as ships sink into the inky abyss below. The whole scene is capped off with a fierce battle against a mammoth cannon on the ship’s deck. It’s an awesome sight to behold, and the campaign is filled with moments like this that will keep your adrenaline pumping.

The tools of the trade 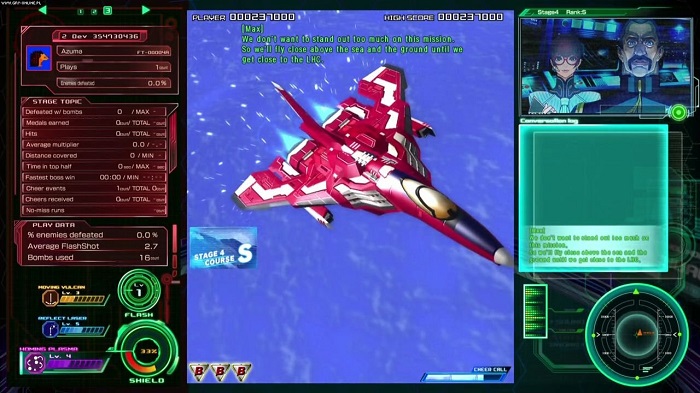 There are three different ships you can pilot in Raiden V: Director’s Cut, each offering their own attributes and sub-weapons. For example, the Azuma is a balanced ship with decent speed and power which comes equipped with homing rocket. The Spirit of Dragon is much slower than the other ships. But it makes up for this shortcoming with its sturdy armor and considerable firepower thanks to its Awl missiles. Lastly, the Moulin Rouge is lightly armored, but its speed and maneuverability make it a capable bullet-dodger in the hands of skilled pilots.  And lets not forget its Chase Laser sub-weapon, which can harass even the most persistent alien scum.

In addition to the three different ships, you can also collect three classic weapon types, each of which can be upgraded with power-ups to become decidedly more powerful. For instance, the Vulcan, Raiden’s traditional weapon-of-choice, fires a handy spread shot in its basic form that’s great for taking down swarms of enemy ships. After collecting a power-up, the standard cannon is replaced with the Swing Vulcan, which sways gunfire side to side with your horizontal movements, making it the ideal tool for crowd control. Additionally, laser weapons start out a bit tough to use, as they fire slow, narrow beams. They’re tough to use at first. That is, until you get a prism that can refract their deadly light all over the screen, leaving nothing but destruction in their wake.

Overall, the game’s three different weapon types may seem humble at first. But with nine total weapon possibilities when you factor in upgrades, it’s easy to find a favorite weapon of mass destruction in the bunch. My favorite of which is the Homing Plasma, which locks onto targets much like the missiles in Taito’s Raystorm series, allowing you to pepper your enemies in destructive, heat-seeking volleys of pure energy.

Another interesting tool at your disposal is the Cheer System. Basically, other online players can cheer the player on, filling up your Cheer Call gauge. Once the gauge is filled, you can unleash an attack that cancels all enemy bullets and significantly boost the power of your sub-weapons. While it’s a novel feature, it’s not perfect. The Cheer System’s use is limited by the number of online players at any given time. Thankfully, the meter does fill up on its own over time, so even without other players online you’ll still be able to take advantage of the skill, albeit more sparingly.

Fresh off the cutting room floor 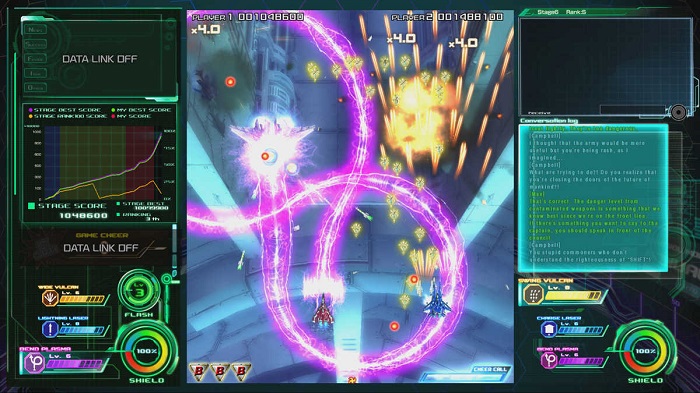 Considering this is the director’s cut of Raiden V, you may expect there to be a plethora of new content thrown into the mix. Well, not so much. This package’s biggest additions are a pair of new stages to test your piloting skills, along with the very welcome addition of a two-player cooperative mode. These fresh areas are well-crafted, however, and well worth tackling. As for the co-op mode, it works great and runs like butter – even when the action is at its most chaotic. That said, if you’re looking for a good excuse to dust off another controller and blast through hordes of enemies with a friend, Raiden V: Director’s Cut‘s cooperative mode is easy to recommend.

Another thing I really like is the game’s inclusion of a fully-dubbed story. Now I know what you’re thinking, “Who care’s about the story in a shmup?” Well, normally I’d agree with you. Raiden V actually spins a pretty compelling yarn, though. Throughout each mission, the team on the bridge of the Raiden Command Ship will fill you in on the various happenings behind-the-scenes. It’s honestly near incessant, which, while admittedly a bit difficult to follow at times given just how intense the game can get, the dialog manages to pull you into the action the way few games in the genre do. So hats off to Moss for finding a way to make me care about the narrative of a shmup for the first time in my 30+ year love affair with blasting aliens from the sky. They’ve done what I thought was impossible.

You know what isn’t impossible? Beating Raiden V: Director’s Cut – thanks in no small part to the bottomless pile of continues it affords the player. Still, if you’re not looking to credit-feed your way to the finale, you’ll find a fiercely challenging shooter. This is a game that requires practice, finesse and nerves of steel to master. While things start of easy enough, before long bullet patterns become intricate walls of floating death (though we’re not talking about Cave levels of spherical carnage here). Despite the challenge, it never really feels unfair.

However, I have to admit that the bullets do tend to blend into the background a bit too often due to their subdued red color, which can be frustrating at times. Still, over time you get the hang of it. And this occasional annoyance was never enough to make me want to elbow drop my Dualshock 4 in frustration. That’s always a plus as far as I’m concerned.

A heavenly dose of bullet hell

Raiden V: Director’s Cut marks successful sortie for the long-running shoot ’em up series. While the updates it makes to its predecessor are relatively few, they still manage to provide worthwhile value to one of the most satisfying shooters to release in recent years. However, if you’ve already purchased Raiden V, these additions don’t quite add enough to justify buying the game all over again. Still, with an entertaining story, high-energy arcade action, and some excellent cooperative play, Raiden V: Director’s Cut is one shooter that will keep fans of the genre coming back for more.

Full disclosure: This review is based on a copy of Raiden V: Director’s Cut given to Hey Poor Player by the Publisher

The king has returned   It’s been two years since Tekken 7 first made its way to arcades in Asia. And since then, Bandai Namco has been working diligently…