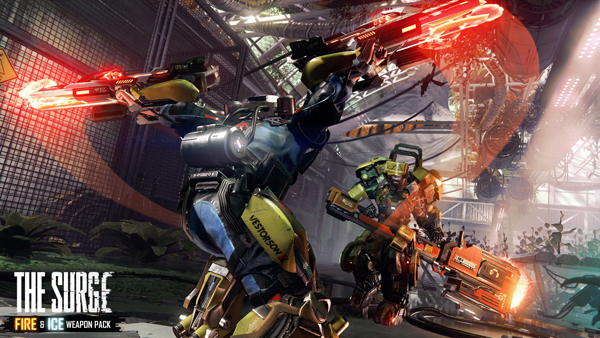 Publisher Focus Home Interactive today announced that The Surge (read our review here) players can now take full advantage of the power of the elements in their punishing dystopian Souls-like, The Surge with a free “Fire And Ice” weapons pack.

On the spicy side of the weapons pack, this DLC introduces new fire-based MG-branded weapons that are enhanced versions of CREO’s riot control products. They are capable of dealing high physical damage with low elemental damage. Additionally, constantly attacking humanoid enemies can cause a powerful fire-based explosion, reducing your foes to lumps of twitching gristle.

On the opposite end of the spectrum are a variety of ice-based weapons. These are CREO’s space travel testing tools and prototypes built in the corporations R&D labs. Originally intended to test materials in the cold darkness of space, they weren’t designed for combat. That said, they pack low physical damage properties in exchange for high elemental damage. Equipping these weapons also provides players with a welcome passive bonus to their health meter.

To access these weapons, once the DLC is installed, take a gander at the security memo and the CREO newsletter added to your inventory’s Organizer, using their clues to locate these 10 new tools of destruction.

The Fire and Ice Weapon Pack is available now on PC and Xbox One. PlayStation 4 owners will be able to snag it for themselves at 10 a.m. PDT / 1 p.m. EDT today.