Hey, You Got Your Gunstar Heroes In My Metroid

There’s no shortage of retro-inspired Metroidvania titles these days. However, very few manage to capture that old school magic as masterfully as Omega Strike. Developed by one-man studio Woblyware, Omega Strike plays like a fusion of Metroid and Treasure’s Sega Genesis classic Gunstar Heroes. Featuring vibrant sprites, satisfying gunplay, and excellent and cohesive stage design, it’s a loving throwback that no fan of the 16-bit era should miss.

Omega Strike’s premise is a simple one. The evil Dr. Omega has amassed an army of mutants to take over the world. The only thing that stands between the bald megalomaniac and ultimate domination is the Omega Force, a scrappy trio of resistance fighters with the firepower to turn Dr. Omega’s forces into rancid mutant mincemeat. It’s a story we’ve heard thousands of times before, but that doesn’t really matter. It meshes with the game’s retro-centric vibe just fine, providing players with a perfectly serviceable excuse to dive into the action. 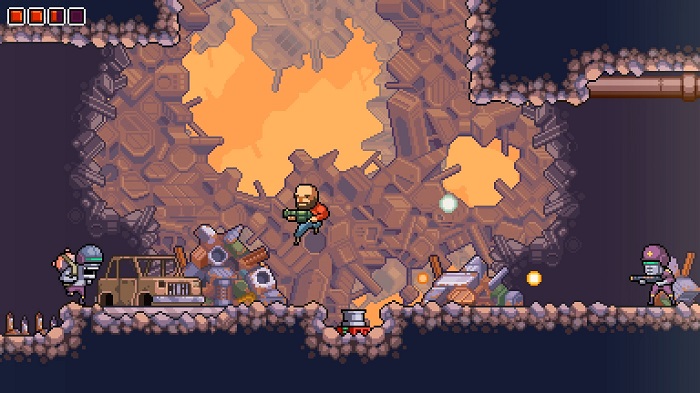 Omega Strike plays similarly to other games in the Metroidvania genre. Players are free to explore a sizable map teeming with baddies to blast and secrets to uncover. As you progress through the world you’ll frequently encounter obstacles. And more often than not, the key to overcoming these roadblocks is a new ability that’s unlocked by toppling a boss or exploring some dungeon-like area. However, while many Metroidvania games move at a methodical pace, Omega Strike steams ahead at a steady clip, thanks in no small part due to its snappy platforming and delightful, fast-paced gunplay. This more frenetic pace suits the game well, making Omega Strike feel decidedly more punchy and explosive than other games in the genre.

As I mentioned at the beginning of this review, Omega Strike puts you in control of three different commandos, each with their own unique abilities that help them get around the area. Selecting them is as simple as tapping a button, and you’ll often need to use their skills in tandem to progress through the world.

For example, Sarge packs a machine gun, making him a solid fit for most fights. He also gains the ability to roll under low ledges and climb pipes to reach otherwise inaccessible areas. The burly Bear’s grenade launcher doesn’t pack the rate of fire or range of Sarge’s machine gun, but its arcing shots can hit enemies from hard-to-reach angles. He’s also the strongest member of the bunch, and can move giant blocks out of the way to clear paths and create makeshift platforms. Lastly, the agile Dex is an invaluable member of the squad. His double jump allows him to deftly reach high-above platforms and avoid pitfalls. And his shotgun is absolutely destructive – especially when it’s fully upgraded by the friendly neighborhood arms dealer.

Locked And Loaded With Charm 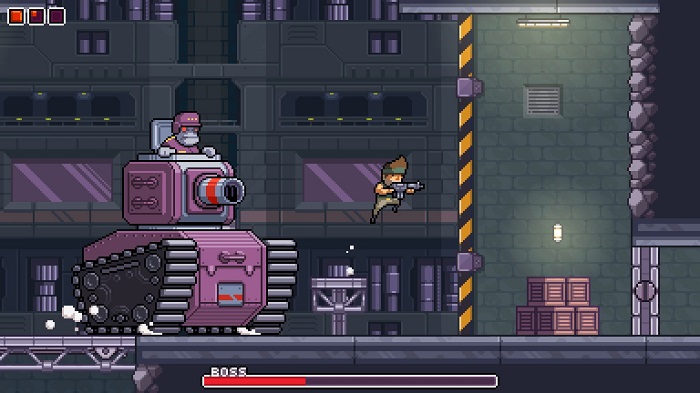 From the chunky, sprite-based aesthetic to the pumping chip-tune score, Omega Strike wastes no time letting you know it wears its inspiration proudly on its pixellated sleeve. As someone with a lot of fond memories playing through run-n-gun classics on the Super Nintendo and Sega Genesis, I have to say the game’s presentation is irresistible. Playing Omega Strike really does feel like digging into a long lost prototype from the days when the 16-bit console wars were in full swing. Trust me,  if you’re a fan of colorful pixel art then you’re going to love what you see here.

Charm can only take you so far though, and at the end of the day Omega Strike left me wanting more. Not for a lack of quality, mind you. Make no mistake, what’s here is great! The problem is it feels more like a bite-sized — albeit delicious — appetizer than a spectacular feast for fans of the genre. This is mainly due to the game’s rather toothless difficulty and staggeringly short campaign. You’ll never find yourself too far from enemies who seemingly shower you in health power-ups. And if things ever do look dire, life-regenerating save points are always just around the corner, which makes death a real rarity.

This problem is also true for boss encounters, which, though varied and full of fun attack patterns, will never really test your skills too much. This lack of challenge means you’ll likely be able to see everything there is to see and do in just three or four hours. If the prospect of dropping cash on a game you can finish in just a couple of sittings bothers you, you might want to look elsewhere. Still, Omega Strike is a whole lot of fun while it lasts.

Cards on the table – I adored the time I spent with Omega Strike. From its lush sprite-based visuals to its unforgettable soundtrack, it’s an incredibly slick package. This masterful presentation, combined with some really well crafted levels, creates an almost intoxicating experience for Metroidvania fans with a soft spot for the 16-bit era. I only wish that the game were twice as long, because a game this well designed should last longer than a sitting or two. Then again, when a game’s biggest problem is you just want to keep playing it, you know you have a winner on your hands.

Full disclosure: This review is based on a review copy of Omega Strike given to HeyPoorPlayer by the publisher.