A Not So Quiet Riot 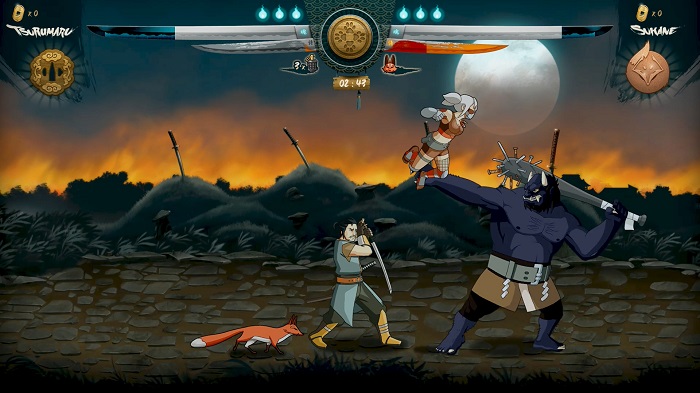 The gaming landscape has changed a great deal over the past three decades. Beat-em-ups, the genre once dominated by franchises like Final Fight, Streets of Rage, and Double Dragon, were once the lifeblood of the arcades and home consoles. Now, with the arcade glory days all but a distant memory, this once hugely popular genre has all but been banished to the annals of video game history.

Thankfully, the folks at indie studio Wako Factory got the memo and have come to the rescue with Samurai Riot. While this chop-socky brawler doesn’t quite stand up to best offerings, it delivers enough punch-drunk combat to satisfy that old school gaming itch. 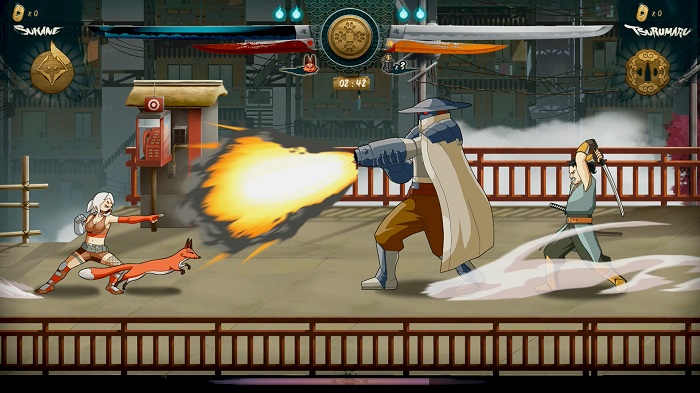 Never bring a fox to a shotgun fight.

Set against the backdrop of stylized Feudal Japan, Samurai Riot allows players to choose between two martial arts masters, Sukane or Tsurumaru, for some good, old fashioned ninja fisticuffs. Each of these characters feels unique and brings their own skills to the table. For example, Sukane is a fierce kunoichi, yet she lacks raw power. However, her speed and ability to sic a fox on her enemies makes her a versatile and mobile fighter. Tsurumaru is a bit slower than Sukane and a large target, but he makes up for this lack of speed and finesse with his powerful sword slashes and potent stash of throwing knives and grenades, which can clear hordes of evil ninjas with a single throw. Both playable characters are fun to take control of, and compliment each other well in the game’s fun two-player cooperative mode.

If you’ve ever played a beat-em-up before, you’ll feel right at home with Samurai Riot. The gameplay is simple, offering a button two attack buttons: one for sword slashes and another for kicks. These attacks can be strung together to form basic combos or juggle your opponents when they fall from the sky. Additionally, you can jump, dash, guard, grapple, and unleash special attacks by holding down either attack button for a second. Adding another layer of depth to the combat is a super meter which, when filled, allows you to execute a powerful combo attack that can make short work of bosses or gangs of baddies in a pinch.

Overall, the combat is easy to pick up, making cracking skulls a seamless and satisfying experience: soul food for any gamer who cut their teeth in the arcades of the 1980’s and 90’s.

Will You Fight For Honor Or Pride? 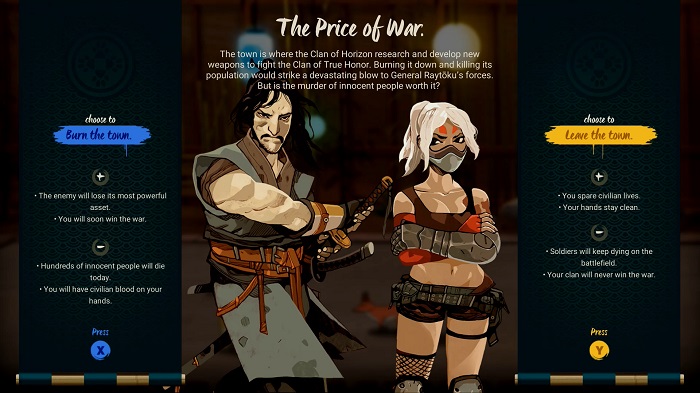 With branching paths and 8 different endings to unlock, Samurai Riot will keep you busy.

One thing that makes Samurai Riot stand out from the pack is the game’s branching storyline. Similar to that of the classic Capcom Dungeons & Dragons beat-em-ups of the early 1990’s, some stages will end with you needing to make a hard choice. The first of these decisions tasks you with choosing whether or not you’ll kill a resistance leader as your lord directed, or will you join his ranks and fight against your former liege? Choices like this pop up frequently over the course of the story, and the actions you choose will determine the stages you visit, as well as the outcome of the game’s 8 unique endings.

Of course, we’re not talking about a Shakespearean saga here. Still, the effort Wako Games put into crafting such a broad narrative for a brawler is pretty impressive. And most importantly, this gives you plenty of incentive to plow through the game a few times over with a friend. Speaking of which, in an bit of an entertaining throwback to Double Dragon’s ending, choosing a different story option than your partner will result in a one-on-one showdown, with the winner determine which path to take.

It’s just a shame the game only supports local co-op. Being able to take the fight to the internet with a friend would have been a nice bonus. 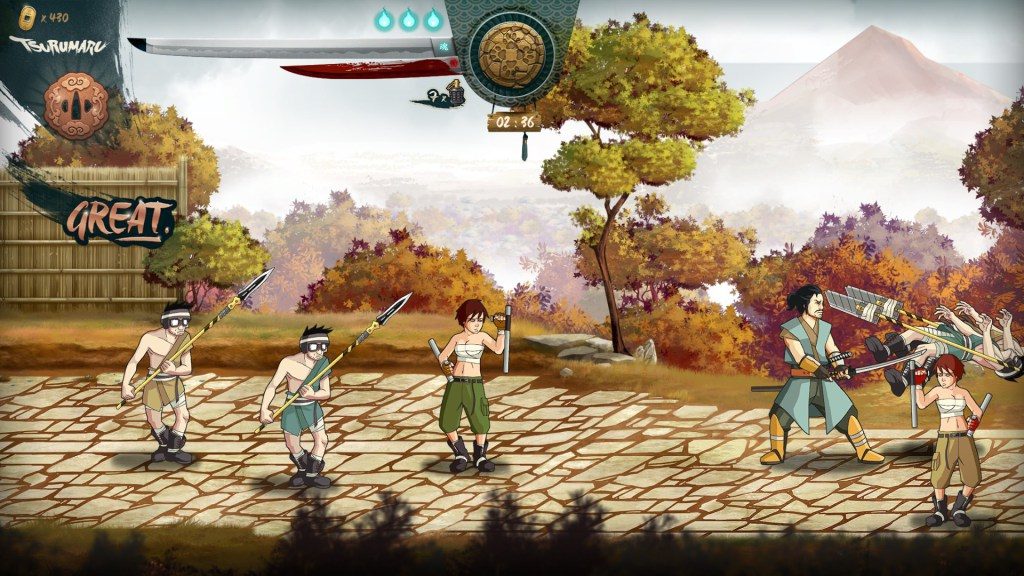 A lack of enemy variety means you’ll be battling the same foes over and over again.

Aesthetically speaking, Samurai Riot is a bit of a mixed bag. Developer Wako Games has taken great artistic license with the game’s Edo period setting. In one stage you’ll trade blows with a shotgun-armed behemoth in a machinery-filled underground cavern. Another stage pits you in a sky-high modern city as clouds form around each player’s feet. Most of these stages are colorful and detailed, and do a nice job of giving the game its own visual identity. Others, however, are a bit strange. Take for instance the pixie-cut coiffed, tonfa-swinging ninjas who wear bandages for tube tops, combat boots, and shorts with cargo pockets. They look more like burn victims who fell headlong into a thrift store clothing rack than deadly warriors.

Needless to say, they don’t quite fit in with their spear-wielding comrades that you’ll constantly encounter. This is underscored by a pretty disappointing lack of enemy variety. That said, be prepared to battle palette swaps of the same four or five foes over and over again throughout each campaign. But hey, at least the bosses look cool and offer a decent challenge.

While the visuals are admittedly a bit uneven, Samurai Riot’s soundtrack is on point. Mixing a fusion of hip hop beats and traditional Japanese instrumentation, each melody fits the action like a well-worn glove. Some of these tracks are bound to be stuck in your head for hours after putting your controller down.

Samurai Riot isn’t without its flaws. It’s lack of enemy variety can make fights repetitive, and some stages drag on a bit too long, wearing out their welcome. Still, it’s a satisfying brawler that fans of the genre should enjoy – especially when played with a friend. With branching paths and eight different endings to unlock, there’s definitely enough here to keep fans of the genre busy. While there are better beat-em-ups out there (see Mother Russia Bleeds), Samurai Riot is a fun throwback to a bygone era that’s worth its asking price.

Full disclosure: This review is based on a copy of Samurai Riot given to Hey Poor Player by the Publisher 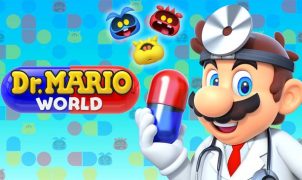