It’s the eye of the tiger, it’s the thrill of the fight… 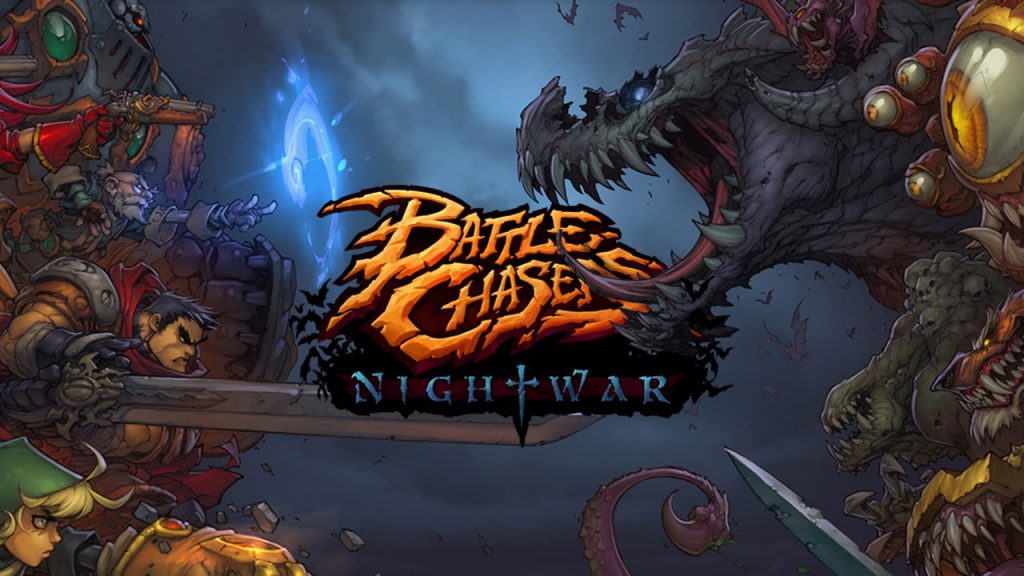 In a time where the RPG genre seems to be shifting further and further from its turn-based roots, Battle Chasers: Nightwar is a welcome breath of fresh air. Based on Image Comics’ comic book series of the same name, the game is a throwback to the role-playing games of old. With a heavy emphasis on strategic, turn-based combat, character development, and exploration, it’s an adventure that players who cut their teeth on the RPGs of the 16-bit era will feel right at home with. But are Battle Chasers: Nightwar‘s old-school sensibilities enough of a reason to keep you glued to your controller for the duration of this quest? Read on and find out!

Battle Chasers: Nightwar‘s story begins with a bang as the game’s protagonists are shot from the sky while piloting their airship over a mysterious island. After climbing from the flaming rubble, players take control of Gully, a young lady with a mean pair of enchanted gauntlets as she works to reunite herself with her allies, who’ve were scattered around the island during the ship’s fiery descent. What follows is a journey through a dark and dangerous land teeming with ancient secrets, vile bandits, and a mysterious woman who’s hell-bent on making life hard for our stranded heroes. 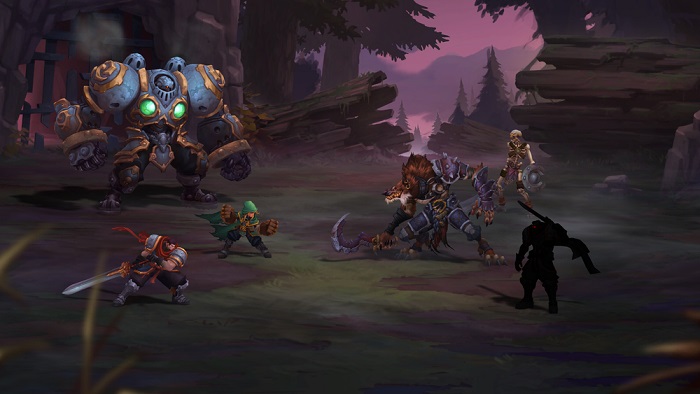 While the story is solid, it’s largely secondary. This is a game that rarely wastes your time with walls of unnecessary exposition. Instead, the game throws you out of the frying pan and into the fire, pushing you forward at a constant pace. Of course, you can scour the land for notes and diaries to expand upon the lore of the island if you wish, but for the most part this is a game that pretty much constantly keeps you doggedly chasing (no pun intended) your objectives as you work to uncover the secrets of the mysterious island.

As the name implies, battle is the real star of the show here. Battle Chasers: Nightwar features heaps of satisfying, turn-based combat against a burgeoning bestiary of colorful baddies. These fights unfold using Actions, Abilities, and Bursts. Actions are your standard, damage-dealing or defensive techniques that can be used instantly. Abilities take time, however, requiring you to wait a turn to finish casting them. These can be group healing or attacks spells, buffs, and debuffs. Lastly, Burst Skills are tremendously powerful techniques that can only be executed when your Burst Gauge is full. Similar to the Super meter in many fighting games, the Burst Gauge fills automatically as you attack the enemy, cast spells, or take damage. Once filled, you can unleash a powerful spell or attack that can help tip the tides of a battle in your favor.

Taking Charge Of The Battlefield 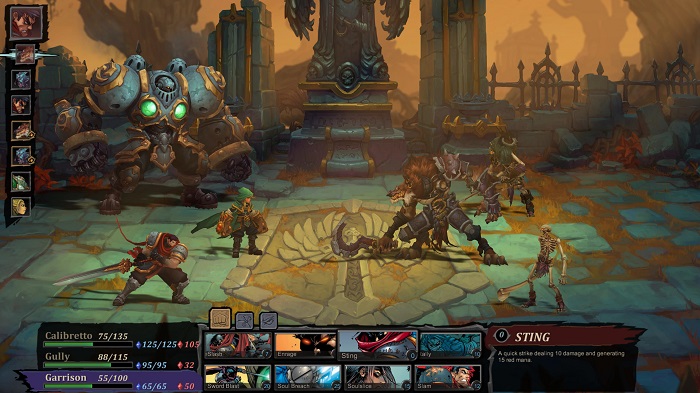 The Overcharge system allows you to eke out some extra MP on the battlefield.

While this is all standard RPG fare,  Battle Chasers: Nightwar does does offer something unique in the form of the Overcharge system. With rabid lycanthropes and cannon-wielding golems all everywhere and looking for a fight, battles can be a real workout. That said, it’s not uncommon to burn through your stock of mana in the dungeons. Thankfully, performing Actions can cause your Overcharge meter to fill, which acts as a bonus reserve of MP. This can turn some battles into a dance as you work to use Abilities and Actions strategically to get the most mileage out of your repertoire of spells and attacks.

All in all, while the combat system may not sound revolutionary, what’s here is rock solid. Every type of enemy offers its own unique challenges, which makes completing each battle a satisfying experience. If you’ve been waiting for an RPG to come around that offers the same lengthy, exhilarating boss battles of the adventures of old, Battle Chasers: Nightwar will leave you very satisfied. 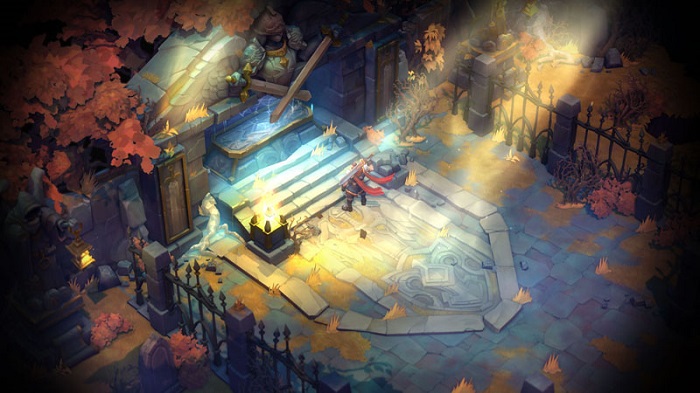 There’s no shortage of breathtaking scenery crammed into this adventure.

As I said before, this is definitely an RPG that wears its old-school roots proudly on its sleeve. However, I have to commend Battle Chasers: Nightwar for respecting players’ time in a way its inspiration seldom did. There’s no random encounters to bog down your progress. Every enemy is plainly visible, whether milling around a dungeon or waiting to ambush you on the overworld map. And, once defeated, they remain dead until you fail a dungeon or visit an inn. This means you’re free to leave a dungeon to gather supplies without having to worry about all of the enemies you killed returning for an encore performance.

Of course, that’s not to say you won’t sometimes want to grind a bit. After all, this is a classical RPG we’re talking about. And with each dungeon offering multiple difficulty levels – including an unlockable heroic mode after its completion – you’re able to return as many times as you’d like to find better loot or level up your party. The only area where the game stumbles in this regard is when it comes to characters who aren’t in your current party. While other games will allow them to incrementally gain experience while sidelined, that’s not the case here. And given how hard it is to gain experience to begin with, it’s not hard to leave a character woefully under-leveled after sitting out a dungeon.

A Succulent Feast For The Senses 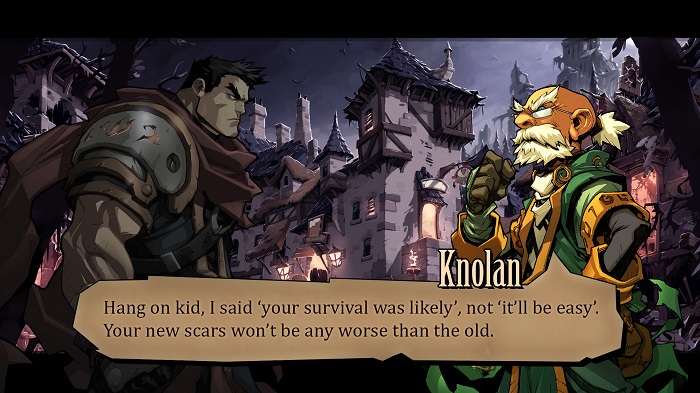 In case the screenshots in this review didn’t already make it clear enough, Battle Chasers: Nightwar is a gorgeous game. Featuring character and setting art from series creator Joe Madureira, who happens to be the man responsible for the stunning art found in the Darksiders games, this is perhaps one of the loveliest RPGs to release this generation. The character models are painstakingly detailed, rivaling the sprites found in Vanillaware’s gorgeous brawler, Dragon’s Crown. As for the designs of the characters themselves, they’re some of the most unforgettable I’ve seen in ages. From the curmudgeonly wizard Knolan to the towering war golem Calibretto, each member of your party is teeming with irresistible personality. Even the dungeons themselves look like meticulously-crafted watercolor paintings. Simply put, this is one pretty game – especially if you’re playing on a nice 4K set.

As vibrant as the visuals are, things shine on the aural front as well. Each dungeon and battle is accompanied by breathtaking arrangements that never fail to impress. From somber guitar pieces to pumping war drums, the soundtrack does a great job of propelling the moment to moment action forward. And the voice acting — while admittedly a bit sparse — is well-delivered throughout the adventure.

My extensive time with Battle Chasers: Nightwar was a largely positive experience. Still, at the time of this writing the game does have a few issues that need ironed out. My PlayStation 4 review build of the game featured a numbered of glitches that marred the experience. The most offensive of these was so bad that it prevented me from completing an entire side quest, as a dialog cutscene simply wouldn’t trigger. Instead, I was left frozen in place as ooze endlessly flooded the dank chamber I was in. While not quite as frustrating as the quest I couldn’t complete, I also found myself booted to the PS4 home screen a half a dozen times during my review.

Thankfully, the game’s generous autosave feature kept this from being a major hassle. It’s worth noting that developer Airship Syndicate has been rolling out substantial pre-release updates. That said, I do imagine most of these bugs will be squashed soon. Still, as of the time of this writing they’re there, and that’s a shame.

Despite a few nagging issues,  Battle Chasers: Nightwar is great fun. It’s a gorgeous homage to the role-playing games of old that manages to hit all the right notes. And when it does manage to deviate from its inspiration, it does so in ways that trim the fat and make things much more enjoyable for the player. If you’re a fan of classic JRPGs and are looking for a stylish new epic to sink your teeth into, Battle Chasers: Nightwar delivers the goods in spades.

Full disclosure: This review is based on a PlayStation 4 review copy of  Battle Chasers: Nightwar given to HeyPoorPlayer by the publisher.