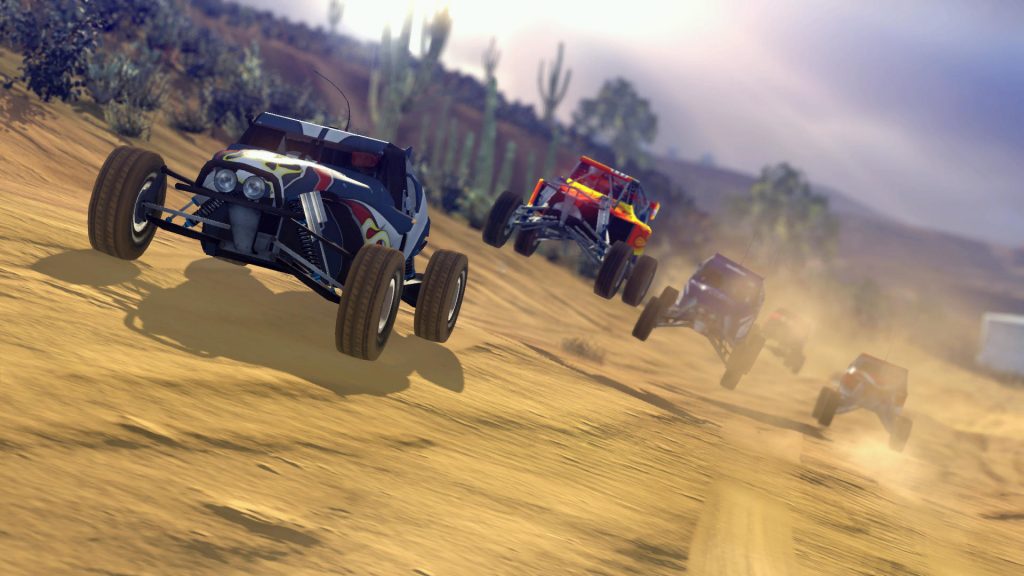 I’ll be frank with you; I was a little apprehensive going into BAJA: Edge of Control HD. I’m not particularly knowledgeable when it comes to vehicles and/or racing in the first place (Mario Kart aside), and my last experience with a game involving off-road racing left a pretty bad taste in my mouth. I know, I know, I shouldn’t pre-judge a game before playing it. But hey, no one’s perfect.

Fortunately, my fears were entirely unwarranted this time around. Despite being a remake of a game which originally released all the way back in 2008, BAJA HD makes the leap into the contemporary racing genre rather nicely. And, although it’s definitely geared toward a specific audience, it’s still accessible enough that someone like me can even get the hang of it after a bit of practice. Mostly.

It’s Going to be a Bumpy Ride

BAJA: Edge of Control is a bit different from a lot of racing games out there. That’s due to the fact that it’s an off-road racer. And, because of that, you won’t just be fighting your opponents for first place. You’ll constantly be fighting against the course as well. In contrast with the plentiful straight roads, sharp turns, and neck-and-neck placing found within a lot racing games, most of your success (or failure) in BAJA HD has to do with how well you handle the terrain of each track. Being off-road and all, each of the game’s tracks are filled with plenty of dips, hills, and bumps. And, since you can’t avoid them, you’ve got to learn how to use them to your advantage. Or at least not totally get tripped up by them. 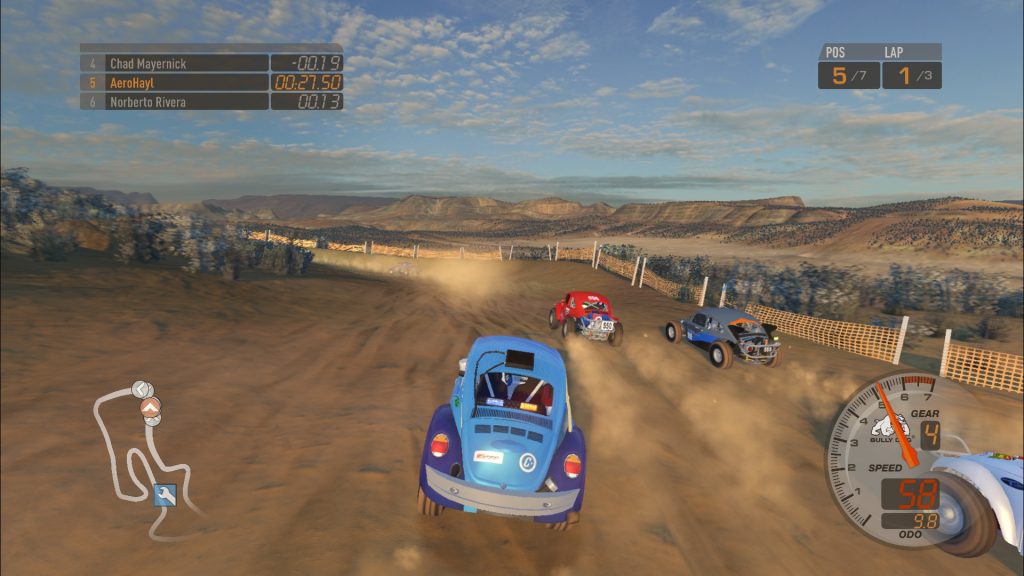 Smooth roads are for chumps!

There’s also a certain amount of finesse when it comes to the actual driving technique Rather than just slamming down the gas pedal throughout the entire race (that’s how normal racing works, right?), BAJA HD will have you timing your acceleration, and juggling it with things like appropriate handbrake and clutch usage. Once you get the hang of it all, everything actually runs together pretty smoothly. Unfortunately, the “getting the hang of it all” part proves to be a little tricky. BAJA HD seems to think that everyone playing isn’t a total racing newbie, foregoing any kind of in-depth explanation of racing mechanics and terminology. To be fair, most people playing this probably are probably at least somewhat knowledgeable on the subject. Still, for the few of us that aren’t, it’s a real hassle learning everything.

I’d like to think that I did alright with my time during BAJA HD. Still, for all of the effort that I put in, I always felt like something was missing. I would do well with certain tracks and areas, but completely mess up with others. I know that some of that boils down to inexperience. Maybe all of it. But I also noticed that the AI seemed to frequently have trouble with the same areas that I was. Because of that, I started to question how much of my problems were actually because of me. If I’m messing up on a race because I’m not that good at the game that’s fine, but if the track is designed poorly enough that the game has trouble navigating itself then that raises a red flag. A red flag that I noticed popping up several times.

Work it at the Circuit

While there are several different kinds of racing modes to enjoy, BAJA HD‘s bread and butter is its Baja Career mode. Baja Career is all about building up a name for yourself by winning races. As you progress, you’ll unlock more leagues in which to participate. You’ll also be able to purchase and drive a variety of new vehicles as you climb the ranks. Placing 1st in each race is, obviously, the quickest way to progress. But it’s not the only way. Each race that you participate in will net you XP (along with some cash). A higher placement means more XP (and money). Instead of using XP in order to provide level-ups for the player, the XP essentially acts as the player level itself. Each circuit, and each race within the circuit, requires a certain amount of XP. If you’ve got enough, then you can participate! 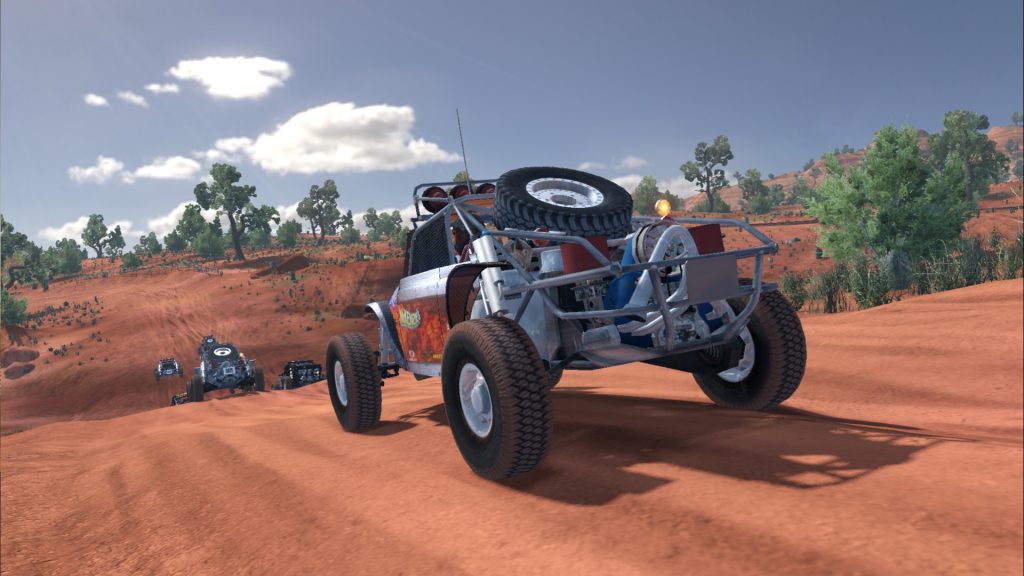 These flames will make me go faster, right?

Most of Baja Career is comprised of traditional circuit race tournaments, consisting of around 4 – 6 individual races each. While these circuit races aren’t really anything special in and of themselves, BAJA HD‘s messy landscaping is certainly something to get used to. As I’ve mentioned before, the game’s off-road style of racing means that you’ll most likely be contending with the track more so than other players. Although you don’t have to win every race to gain a decent amount of XP and money, you’ll probably want to anyway. Fortunately, BAJA HD‘s got your back on that. If you’re doing poorly, all you need to do is restart the race. No need to worry about restarting the entire circuit! This is kinda cheap, but I’m not complaining. These tracks gave me a serious run for my money, and often times I found myself needing practice.

Maybe it’s just me, but it really feels like the circuit tracks run together after a while. It’s not that I think that they’re bad necessarily. I know that BAJA HD is going for a more realistic vibe. In that sense, they’re doing just fine. It’s just… well, you can only see so many dirt roads and cacti before they get boring. It’s not just about the aesthetics, though. The courses all have a very similar feel about them, too. I know that racing isn’t about creating memorable tracks, but it also says something when players can’t even recall a single one of them. They’re not bad, just bland. Still, even having said that, I can see their appeal toward hardcore racing fans. 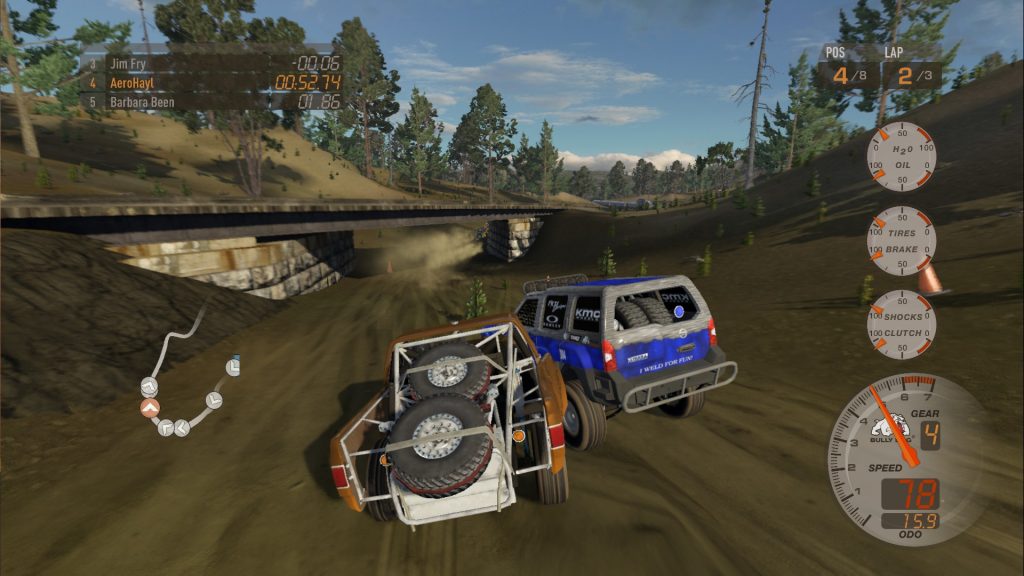 What do you mean I’M in YOUR way?

Baja Career features a few other types of races too, such as the lengthy rally and open races or endurance-based hill climb races. Since circuit races can get a little monotonous, these other race modes help to spice things up. They also generally provide a bigger challenge. Hill climb races become less about going fast, and more about not completely destroying your vehicle during your trek. Open races become about perfect performance, in order to stay ahead of bigger and faster cars. It’s always nice to see a game use what it already has to create new experiences. BAJA HD does that nicely.

Vehicle upgrades are also very important. While each vehicle has their own starting stats — such as engine quality and durability —  that (for some reason) remain static, your vehicles all have a subset of stats that can be tweaked. By giving the insides of your vehicle a major makeover, you can increase your engine’s horsepower, upgrade your plumbing and ventilation, and fortify the strength of your tires and breaks. These upgrades are optional at first but become increasingly less so as you progress, so don’t feel badly about spending all of your hard-earned money!

BAJA HD has two additional race modes found outside of Baja Career, the first of which is Free Mode. Free Mode is exactly what it sounds like; a chance to freely drive around. I was actually a little surprised to find something akin to open-world exploration in a racing game. Sandbox and racing genres usually don’t mix, so it was cool to actually see the two intermingling. Unfortunately, I didn’t find much point to it. I drove up hills, off cliffs and into oncoming traffic, and discovered a few landmarks. …And then I was done. I looked around for a while just to make sure that there wasn’t some big gameplay mechanic that I was missing, but never found one. Free Mode is cool, but more of a one-and-done kind of deal. 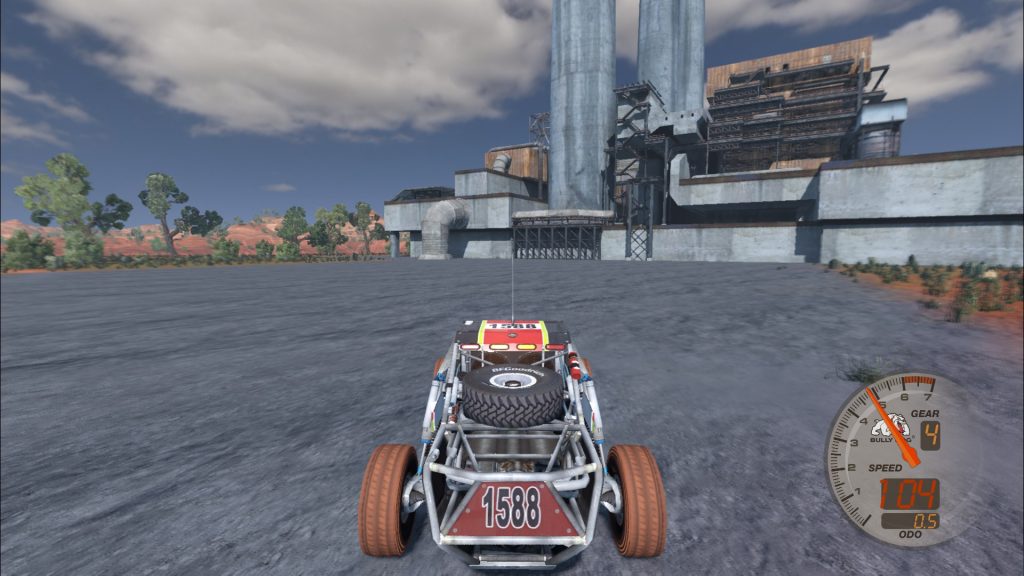 There are also the big, bad, Baja Races. Okay, so they aren’t actually bad. But they are big. In terms of mechanics, they basically work the same as rally races, taking place on long stretches of road, without the complex turning featured within circuit racing. But they’re longer. Much longer. Depending on which Baja race you pick, you’re looking at anywhere from around 1 – 3 hours of driving time. If you’re into long races, then the Baja Race is absolutely for you. For the rest of us out there however, it can get taxing pretty quickly — especially if someone takes your lead.

This probably isn’t going to be the most amazing racing game that you’ve ever played, but it’s still pretty solid. Boasting generous number of tracks and vehicles, decently in-depth vehicle customization, and a variety of gameplay modes from which to choose, BAJA: Edge of Control HD is a fun time overall, despite its occasional monotony. I wouldn’t recommend this game to everyone, but it’s definitely worth a look at if off-road racing is your thing.

Full disclosure: This review is based on a copy of BAJA: Edge of Control HD given to Hey Poor Player by the Publisher