Project Cars 2 is perfect for pros, but rookie racers will crash and burn 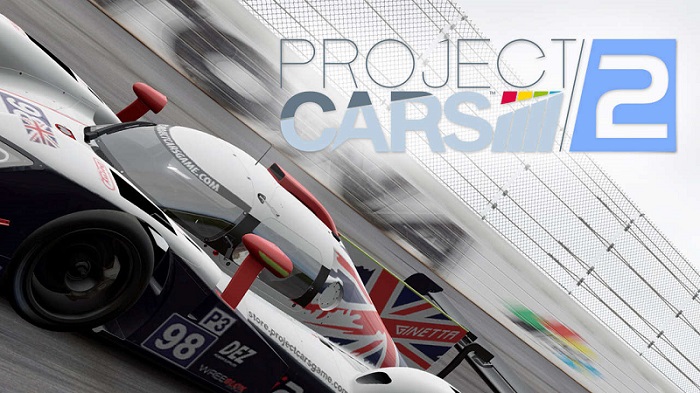 When it raced onto consoles and PC back in 2015, Project Cars wowed armchair gearheads with its sizable roster of licensed cars and painstaking attention to detail. Now, developer Slightly Mad Studios returns with Project Cars 2. This sequel expands on its predecessor’s rock-solid foundation, introducing more cars, a greatly expanded career mode, and the incredibly versatile LiveTrack 3.0 system that makes every race a truly dynamic experience. All of this comes together to form a great evolution for the series, teeming with content that series veterans will love diving into. However, with next to no tutorials available, newcomers to the racing sim genre will likely feel left in the dust.

After you’re greeted with Project Cars 2‘s ludicrously dramatic — but absolutely lovely — opening cinematic, you’re given the opportunity to jump right into your illustrious racing career or put the pedal to the metal through the game’s single race and online modes. The game gives you the option of starting your career from the ground up by choosing one of three rookie classes including go-karts, Formula Rookie, or Ginetta Juniors. You’re not confined to the rookie circuit though. If you’d rather jump right into the heavy machinery, there’s nothing stopping you from getting behind the wheel of GT, prototypes, touring cars, and Rallycross class rides.

As you climb through the ranks in your career, you’ll be able to attend special invitational events. Another nice feature the career mode introduces are Manufacturer Drives. These allow you to undertake various challenges and eventually become a factory driver for such iconic automobile manufacturers as Porsche, Aston Martin, Ferrari, Nissan, and more. Tackling these challenges is great fun, and adds even more meat to the bones of Project Cars 2‘s dense racing package. 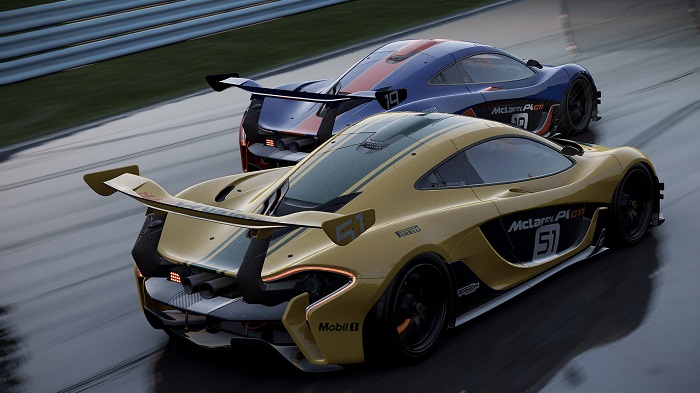 Each of Project Cars 2’s more than 180 rides is exquisitely detailed.

As I said at the beginning of this review, if you want to climb the ranks in the game’s career mode then you’re going to need to be a pretty seasoned simulation veteran. Even when racing on less demanding difficulties, you’ll find the computer AI to be pretty tenacious. These digital speed demons can go from seemingly oblivious to gleefully psychotic at the drop of a hat. Eager to send your car careening into the wall, these kamikaze racers will waste no time turning a scenic drive through the Scottish countryside into a demolition derby.

That said, the AI’s bipolar nature, combined with some incredibly slippery handling depending on the various weather conditions, (a light frost made my 1994 Nissan 300ZX Turbo feel about as maneuverable as a washing machine strapped to roller skates) is occasionally a recipe for disaster – especially when you consider a single spin-out can leave you hopelessly unable to reclaim your position. As someone who’s admittedly more experienced with arcade style racers, I have to admit that I spent plenty of time replaying events to progress in my career. This of course made it quite the feat to experience the courses the game has to offer.

Thankfully, its here that Project Cars 2‘s single race custom mode really shines. You can edit the rules of each race to remove penalties, customize the weather, and hit the asphalt of all 52 tracks in the game’s 180 different licensed vehicles to your heart’s content. This mode is an absolute joy that largely alleviates the stress that can come from the career mode’s steep learning curve, leaving you free to create the event of your dreams. So whether you’re looking for something ridiculous, like tackling the Dubai Autodrome in a snowstorm, or something more believable, like sloshing through the bends of Scottland’s Bannochbrae in a torrential downpour, the world is your oyster.

Science on the speedway 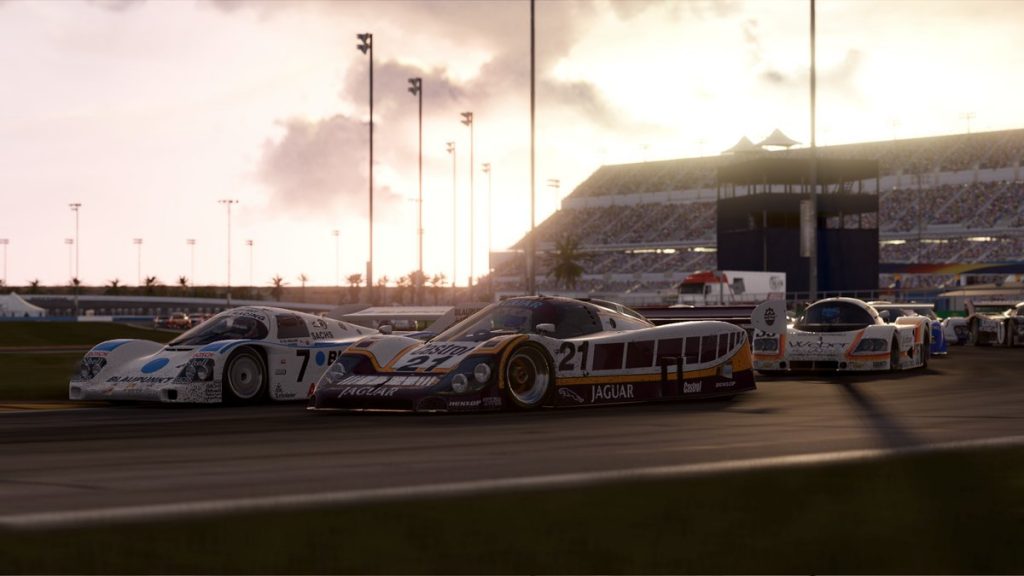 The LiveTrack 3.0 system breathes life into every inch of asphalt to create a dynamic racing experience.

Perhaps one of Developer Slightly Mad Studios’s most impressive feats when it comes to Project Cars 2 is the LiveTrack 3.0 system. LiveTrack 3.0 actually factors in how various factors, like temperature, grip, rain puddling, and loose debris like gravel affect every last inch of the racetrack. This is especially impressive when participating in longer races as you can actually see puddles form in dips in the road, or snow begin to accumulate on the raceway, turning previously safe paths into real road hazards. All of these factors are taking into consideration, and you can really feel the way these variables begin to impact the handling of your vehicle.

Without a doubt, LiveTrack 3.0 is some really impressive tech. And I honestly can’t wait to see how it evolves in future iterations of the series. Until then, I’ll be happily experimenting in custom races just to see how various conditions can impact each of the game’s massive lineup of tracks. 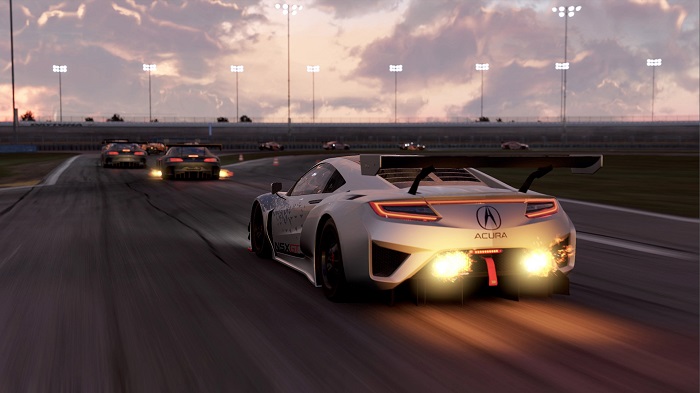 The various weather and lighting models create some breathtaking scenery.

Publisher Bandai Namco Entertainment supplied us with a copy of the Xbox One version of the game for this review, so I can’t comment on how the game performs in 4K on the PlayStation 4 Pro. However, even when played on a standard Xbox One Project Cars 2 is a thing of beauty. Each car is meticulously detailed and looks like a spitting image of its real life counterpart. Additionally, each track is lavishly detailed, especially when brought to life with the various weather and lighting effects that come from racing at different times of day.

Not only does Project Cars 2 look stunning, it performs well too. While it doesn’t quite reach 60fps, the game manages to stay at a comfortable 45-50fps in most races, really only chugging during large crashes involving numerous cars or when you’re racing in a torrential downpour, where large splashes of particle effects from each vehicle begin to throttle the console’s computing power. Even then, the game still remains perfectly playable. It’s also worth noting that I did see occasional instances of slight screen tearing on the Xbox One. But all things considered,  it’s pretty minor, and quite easy to overlook when you consider just how fast races unfold.

If you’re a racing simulation enthusiast then Project Cars 2 is a game that will get its hooks deep into you. Filled to the brim with content, it’s easy to imagine die hard fans of the series dumping a few hundred hours into the game’s plethora of modes and online competitions. Simply put, if you loved the original Project Cars, then this is a sequel you won’t want to miss.

This recommendation comes with caveats though. Project Cars 2 is a meticulously-crafted game that requires patience and a familiarity with racing sims to master. And while developer Slightly Mad Studios’ passion for motor sports is palpable, this attention to detail can chase novice racers off the track. If you don’t have the patience to learn all of the nuances of gear ratios, downforce, and the other minutiae that come with the territory, then you’re going to face a long and hard road to the podium. But if you’re up for the challenge, Project Cars 2 is a deep and rewarding racer that deserves your attention.


Full disclosure: This review is based on a review copy of Project Cars 2 provided to Hey Poor Player by the publisher.