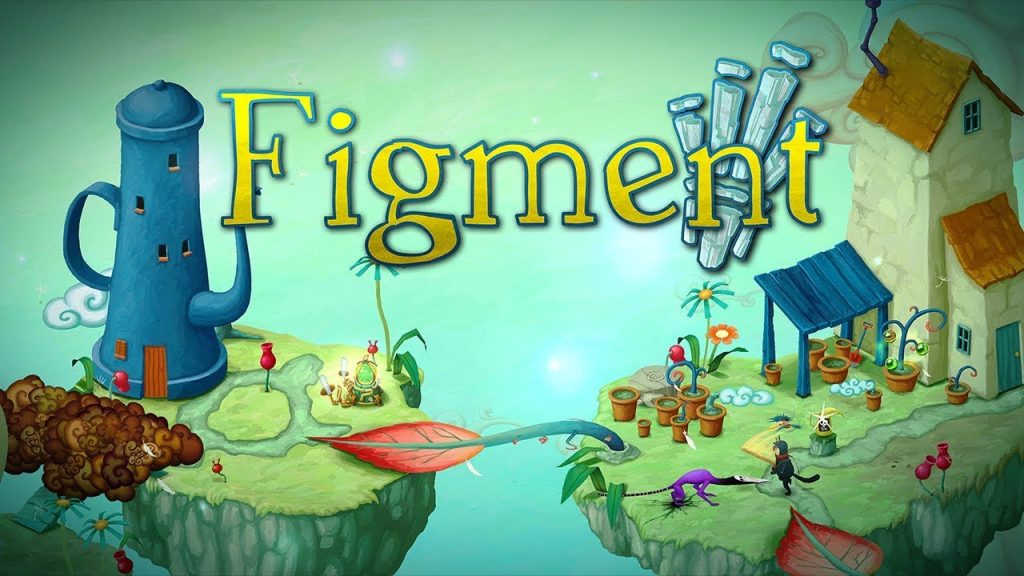 Earlier this year, I was able to demo a preview build of Bedtime Digital Games’ (at the time) upcoming game Figment. It didn’t take much for start falling for it. Within its few short levels, it managed to provide a fun, decently challenging adventure. And much to my delight, it centered around the human psyche! I really enjoyed it, and I was eager to play the full game. And fortunately, I was able to! …I guess that’s kind of obvious, though, huh?

Needless to say, my appreciation for the game has only grown the more that I’ve played it. The gameplay itself is, of course, enjoyable. But to me, what stands out the most is how this game handles its subject matter; the human mind. Strong yet fragile, it seems like our mind is constantly making and breaking parts of itself to best prepare us for whatever is happening in our lives. Figment‘s ability to reflect that through its gameplay is a huge part of its overall charm.

Following an ambiguous and morbid audio-only intro scene involving a girl and her parents getting into a car crash (and not filling the player in on any details past that), Figment‘s story opens with protagonist Rusty — the part of the (presently) unnamed person’s mind in charge of fighting fear — relaxing in front of his house, about to enjoy a nice martini. His relaxation is soon interrupted however, when his old friend Piper flutters in, warning him of impending danger. Brushing her aside, he leaves his patio to fetch some ice… only to come back to find that his precious scrapbook that he had left laying out has been stolen by a gangly, looming, nightmarish creature. They also took his drink, too. Now that’s evil. 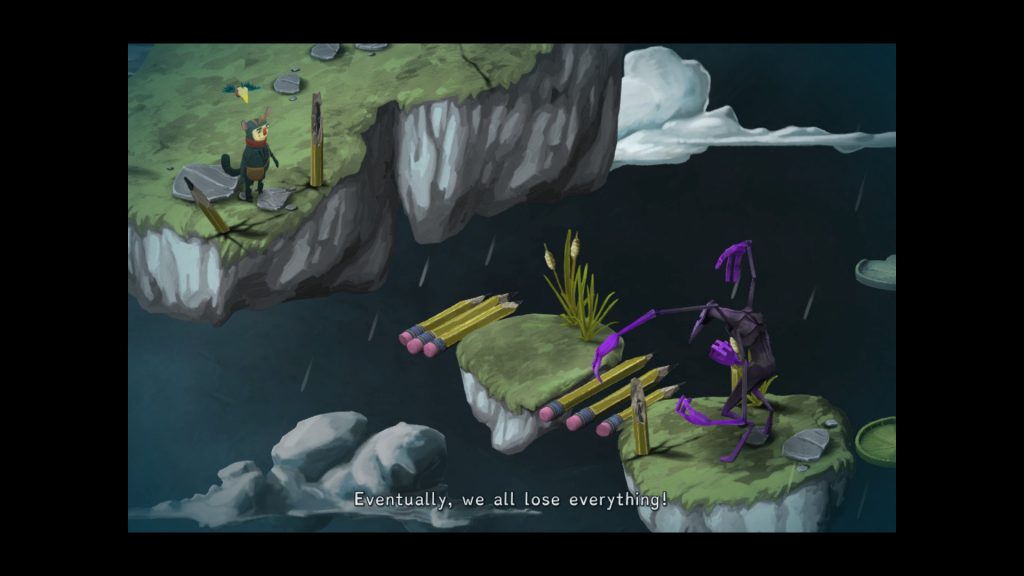 Quite the sensationalist now, aren’t we?

Being the righteous, possibly alcoholic, creature that he is Rusty tails the thief. His chase eventually leads him into Cerebrum City. And upon arriving, he realizes that he isn’t the only one having problems. It seems as though the mind has recently been under attack by nightmares. These nightmares have taken root throughout various parts of the brain, causing the mind to become fearful and sick. Reluctantly, Rusty decides to fight the nightmares… but only because he wants his scrapbook back. It’s not like he actually cares about the mind or anything, okay?

As you can probably guess, there’s plenty to take in when it comes to Figment‘s setup. A “retired” part of the mind with a fixation on alcohol and the past, a perky, slightly annoying bird companion, a nightmare given physical form hellbent on destroying the mind from within… things are pretty bizarre. And they only get more bizarre as you progress throughout the game. Alone, most of these creatures, and the stories behind them would be interesting. But what I enjoy most is the fact that, due to this game taking place within someone’s mind, everything in this game has some kind of significance. This game is definitely made for people who like finding meaning in everything.

Figment is a top-down, isometric adventure game to its very core, featuring gameplay reminiscent to that found in older Legend of Zelda titles, or even games like Secret of Mana (albeit watered down, and sans RPG elements). Although mechanically simple, Figment still does a good job of mixing things up thanks to its level design. Accurately reflecting the differences between the various parts of our mind, each of Figment‘s areas feature different gimmicks and traps to work through. While the variety does successfully help the game avoid becoming stale, none of it is overtly challenging. Sure, you may get hit by a swinging pendulum or a falling tooth once or twice. But after that, it becomes pretty easy to pass through everything unscathed. Or mostly unscathed, anyway. 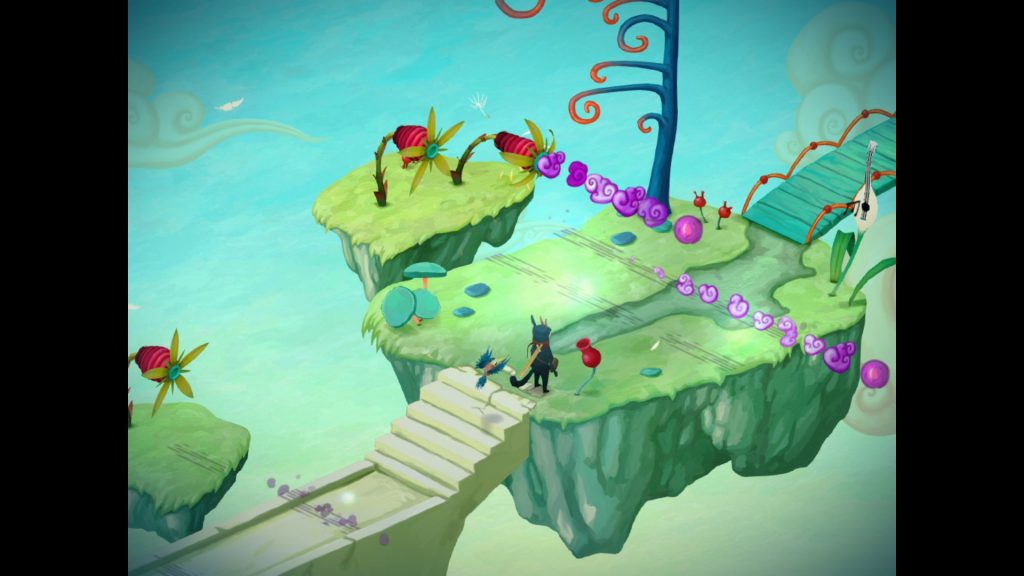 Thanks to the nightmares, each area in the mind has also become infested with a number of creepy crawlies to fight. Fortunately, despite his extended vacation, Rusty’s combat skills seem anything but. Once mimicking a milder version of The Legend of Zelda, fighting doesn’t amount to much more than basic hack and slash combat. You swing your sword at enemies, and dodge roll out of the way when they attack you. Maybe you’ll even throw a spin attack or two in there for good measure. While the baddies you’re fighting are all unique and are each symbolic of potential psychological problems, they aren’t terribly difficult to take down. Fortunately, fighting isn’t the main focus of this game. And, because of that, its relative simplicity is easy to overlook.

While Figment is technically an adventure game, I personally feel like it falls into the puzzle genre more than anything else. Why? Well, because the amount of actual adventuring that you’ll be doing pales in comparison to the amount of time that you’ll be solving puzzles. I guess that kind of makes sense though, given where the whole game takes place. 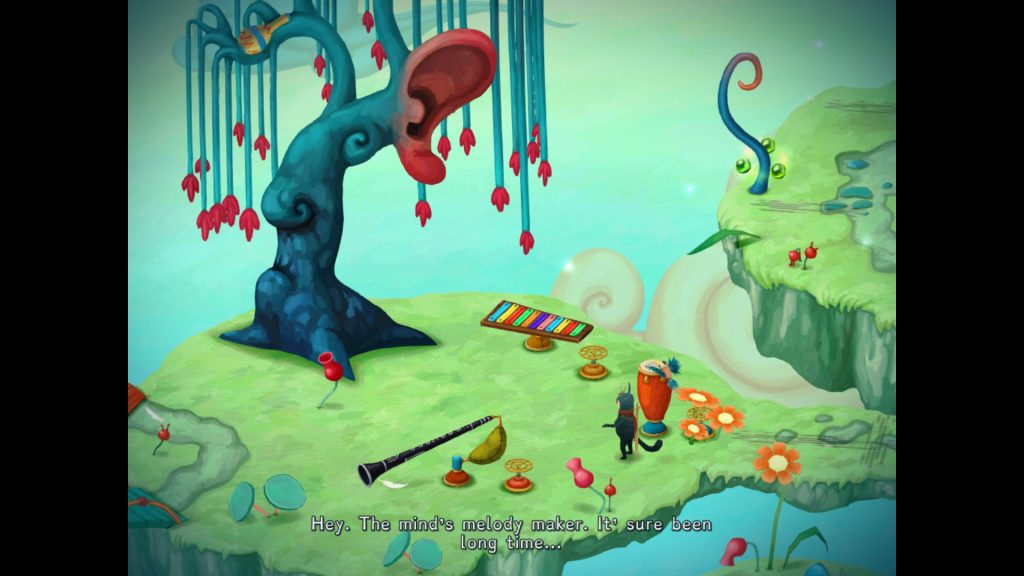 Music to my… tree.

I’ve got to applaud how this game handles its puzzles. Rather than relying on the bizarre or obtuse gimmicks (as many games today seem to do), Figment nurtures the player’s puzzle-solving skills. Things start off easy enough. Mechanics are clearly demonstrated, and the game makes sure that you know what you’re doing. Slowly but surely however, it builds upon itself. While the general structure of many puzzles are the same (essentially just requiring the players to collect and use the appropriate items), they become more complex over time and require players to think several steps ahead. I also appreciate the fact that there’s no penalty for failure. Some of these puzzles can get tricky, and it’s easy to mess up. Fortunately, if you do, the game always allows you to correct your mistakes.

While the “item use” puzzles do remain a constant throughout Figment, you can be sure that they’re not the only ones that you’ll be running into. Each area features a number of unique puzzles. Once again following the overall theme of the game, these puzzles often times make players use a variety of skills, including musical ability, recognition, and spacial awareness, and were all quite fun. 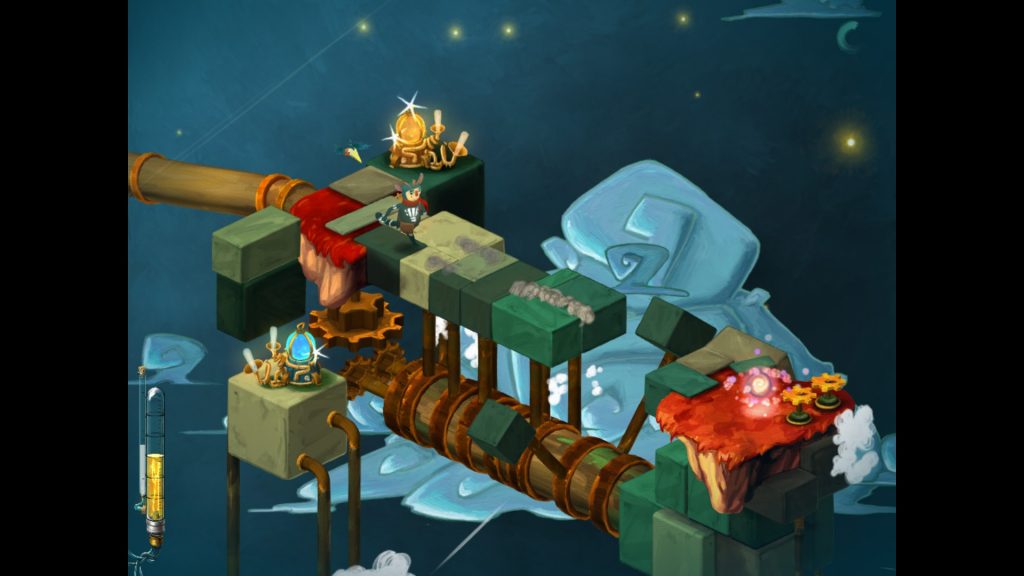 Each level in Figment also contains a handful of forgotten memories. While not necessary, collecting them provides the player with some interesting backstory. They’re also hidden behind some of the trickiest puzzles in the game. Going a step further than the norm, these puzzles really challenge you think outside of the box by making players use items abnormally, or solve puzzles which they may have already solved before in new ways.

It’s All About Perception

Serving as the icing on top of a inspired narrative and a fun puzzle-solving adventure is Figment‘s asthetic. The game’s visuals are presented in a hand-drawn, surreal manner that accurately seems to depict whichever area of the brain you’re currently in. From the artistic Freedom Isles to the logical Clockwork Town, Figment‘s vivid visuals add even more to the game’s story, and are a treat to look at. 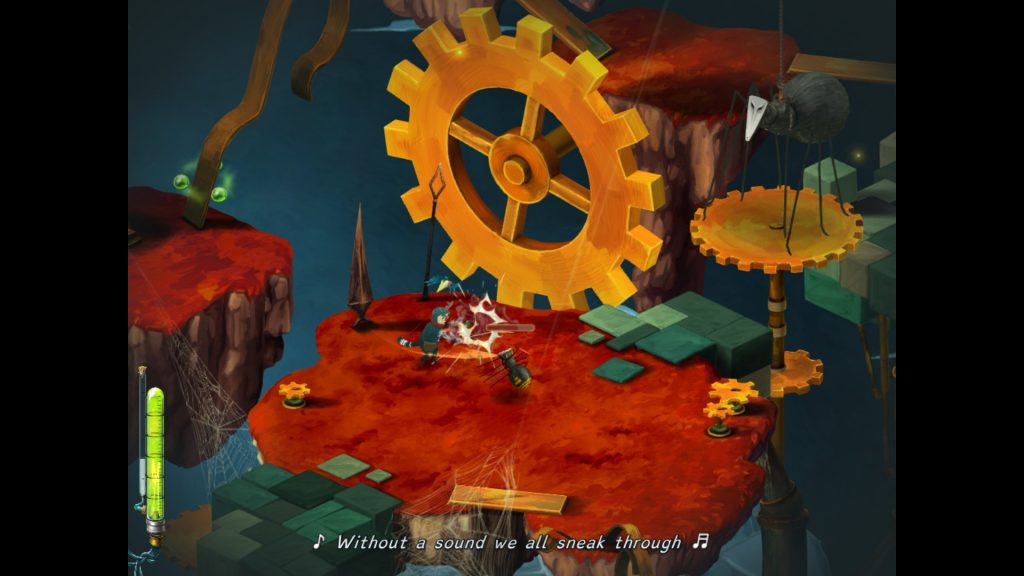 Doesn’t singing count as a sound?

Figment also has… singing bosses. Seriously. As the nightmares try to kill you, they sing. I can’t help but laugh when thinking about it, even now. It’s so goofy. But, amazingly enough, it works. As with literally everything else in the game, Figment‘s musical maladies have meaning, and more often than not serve as subtle backstories regarding the character singing them. Yeah, sure, I can’t really take a giant singing spider tied to a rope that seriously as a boss. Not even when it’s trying to rip me apart. But I’d be lying if I said that I wasn’t amused by it.

Figment may not be the most challenging game ever, but it’s a lot of fun, and exceptionally clever as far as Psychological representation is concerned. I definitely reccomend that you try this game out for yourself. Before that, however, I’d like to make a suggestion; brush up on your Psych basics. While the game has a lot of charm even as an abstract concept, having at least a somewhat basic understanding of how the mind works makes this game so much better. Trust me, it’s worth it.

Full disclosure: This review is based on a copy of Figment given to Hey Poor Player by the Publisher