Something Fishy this way Comes 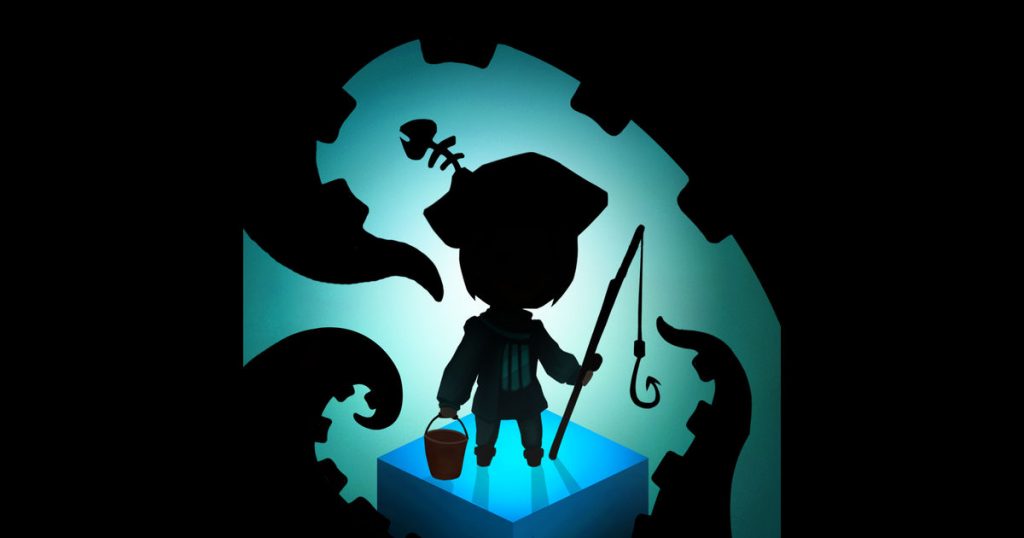 I used to love flash games. Back when sites like Newgrounds and, later on, Kongregate, were in their prime, I would spend countless hours on my PC with the hundreds – nay thousands – of free games that were at my fingertips. And it wasn’t even that I didn’t have normal video games to play. There was just something about them that I was irresistibly addicted to.

Since then, my flair for flash has (not surprisingly) waned. That doesn’t mean that I don’t still enjoy them, however. Before I get any further, let me make it clear – Rule with an Iron Fish isn’t actually a flash game. A bit ironic, I know, but stick with me. Although not an actual flash game, Rule with an Iron Fish seems to perfectly embody everything that made the golden age of flash games so enjoyable. It may not be particularly deep or intuitive, but it is quirky, easy-to-play, and, most importantly, fun.

Rule with an Iron Fish follows the story of brother and sister Ironfish who, while out on the high seas, found themselves under attack by the evil Kraken and found themselves split apart from one another. When the protagonist (whichever of the two siblings you picked) comes to, they find themselves on Buccaneer Bay – a small island populated by pirates who… well, maybe aren’t the best at their job. Amusingly enough, instead of being taken captive, Ironfish gets promoted to captain… while also making them responsible for fishing up enough food for everyone. 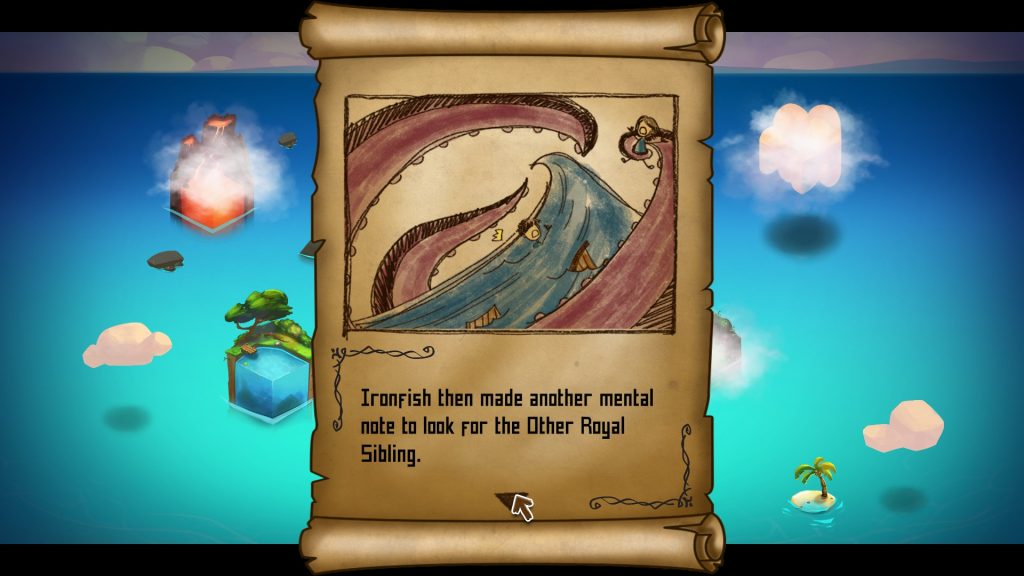 At least you remembered!

As far as the main story goes, there isn’t much else. Rule with an Iron Fish is a very short and straightforward game. Don’t expect the main campaign to be anything to wild. Instead, most of this game’s creative writing is showcased through interactions with its (surprisingly numerous) cast of characters. Throughout your adventure, you’ll run across a number of… unique individuals… who can be recruited into your merry band of pirates. Actually, most of them force their way into your group. But hey, why split hairs?

If your character’s last name is “Ironfish”, can you guess what most of this game revolves around doing? If not, I’ll give you a hint; it’s not mining for iron. That’s right, catching fish! And this is where that “flash game vibe” that I was talking about earlier comes in. While technically a sort-of fishing simulator, Rule with an Iron Fish largely plays out like a slightly sophisticated clicker-type game. You cast your rod, wait for a fish to bite, and click with proper timing. Sometimes you need to tire the fish out by pressing directional buttons as they appear onscreen, but nothing ever gets more complicated than that. 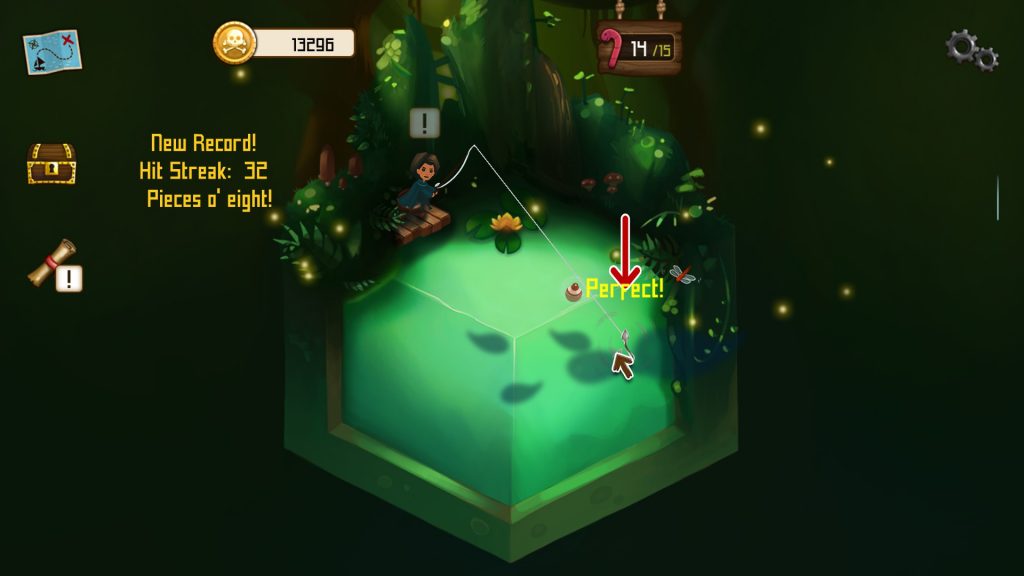 Although you’re basically just fishing because some lousy pirates told you to, lining your pockets with omega 3s comes with a few benefits. As you catch fish, you’ll acquire money and EXP. Money, as you can probably guess, can be used to buy upgrades such as better hooks, and larger bait capacities. Leveling up provides you with a few passive bonuses, and unlocks more things for you to buy.

You also won’t just be fishing in one spot. Which is good, because that would be boring. Though you may start out fishing on a tropical island (or maybe it’s a forest?), your aquatic adventure will soon take you beyond to swamps, icebergs, volcanoes, and even the sky. I’m not sure how you manage to pull off those last two, but I guess it doesn’t matter. The two biggest changes between each area are its visuals and the kinds of fish that you can catch. Some levels feature gimmicks – like the volcano (understandably) burning up your line if it’s in the lava too long – but there isn’t a ton of technical diversity in between each level. I would even venture to guess that they’re there to help pace player progression more than anything else. 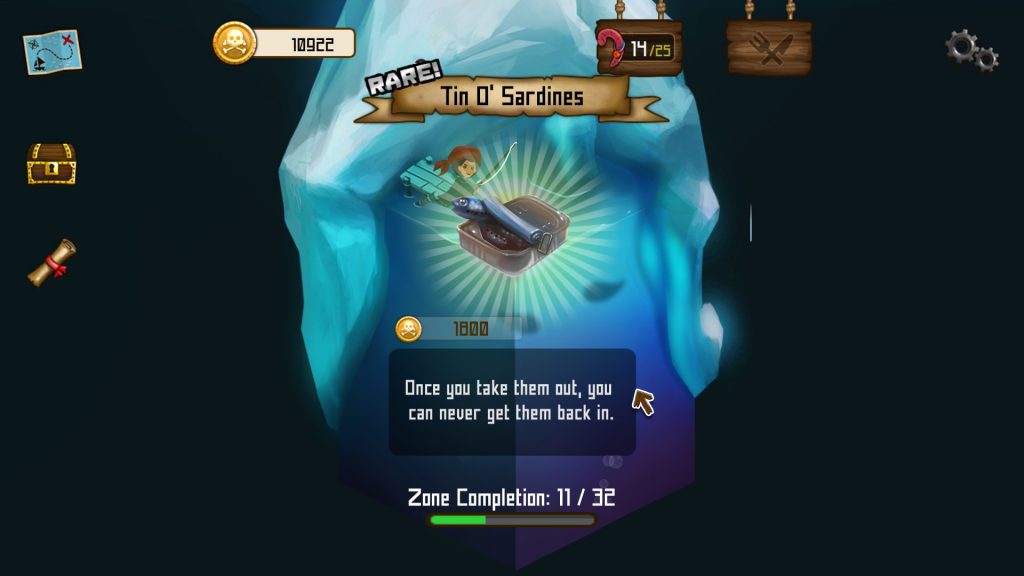 Should I… should I even ask?

I’ll admit, on paper, that might sound kind of boring. In fact, I wasn’t sure that I’d enjoy it at first either. But Rule with an Iron Fish has this weirdly fascinating addictive air about it, thanks to its ability to provide players with consistent levels of instant gratification. And I definitely fell into that trap that it so cleverly sets up. Just one more new fish. One more level-up. Just a little bit more money. Any excuse to stop you from putting the controller down. Rule with an Iron Fish’s steady pacing when it comes to providing consistent rewards to the player has the capacity to turn into a vicious, time-sucking cycle. But hey, at least it was fun!

While not nearly as prominently featured as the fishing that you’ll be doing, Rule with an Iron Fish does feature a secondary activity more becoming of a pirate; fighting! That’s right, you can actually get into fights with other pirates. Before you let your mind wander too much though, they aren’t anything extravagant. In fact, I’m not even sure that you can technically classify them as “fights”. It’s more like… I don’t know, your character sailing up to someone and being a jerk to them. But I’m sure that they deserved it. The game seems to think so, too. 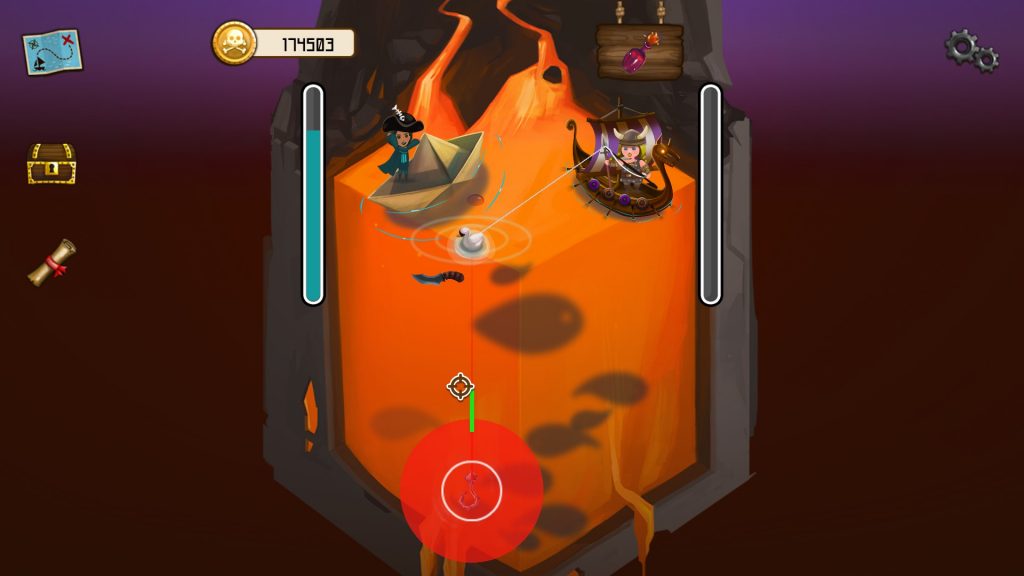 I’m not sure which part of this is most concerning.

In Rule with an Iron Fish, fights are the opposite of fishing. How? Because you’re trying to actively stop your enemy from catching fish. You’ll need to throw projectiles at enemy lines when they cast their rod, magically summon seagulls with a net to catch fish when your foes literally blow them out of the water with dynamite (why can’t I do that?), and defeat enemy robots by clicking on them. If you manage to pull off enough tomfoolery, you win. If they catch too many fish, you lose. Once again, all of this is very simple. But it’s still a lot of fun. Even if it does have the potential to become repetitive.

Even Pirates Need to Socialize

When you need a break from fishing and fighting, you can also head back to Buccaneer Bay for some R&R. Serving as the hub world for the game, Buccaneer Bay allows players to freely wander around, talk to their crew, and pick up quests. While small in size, this little island has an impressive amount of character jam-packed into it. It also has a lot of characters on it, too (hah!). There’s a surprising amount of dialogue to (happily) go through, and every character – regardless of personality – is quirky and charming. 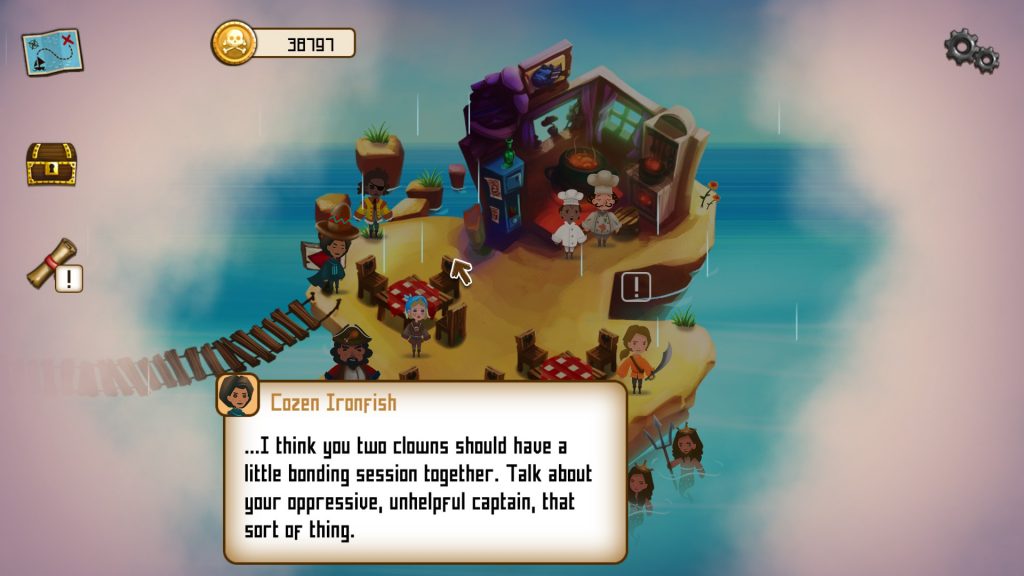 Glad to see everyone’s getting along…

To top things off, you can even run your own little farm on Buccaneer Bay. By planting seeds, you can raise several different kinds of crops. Crops like carrots, mushrooms, venus flytraps, and… um… worms. Worms which are then used as a noodle substitute. Yeah, it’s weird and gross. I know. But you can use all of your “crops” to make dishes that will help you while you’re fishing. And, best of all, you don’t actually have to eat them! A win-win!

Rule with an Iron Fish is quirky, simple, flash-esque fun. It’s as simple as that. While it doesn’t present anything novel, and it’s an admittedly short game, I can honestly say that I really enjoyed my pirate-recruiting, fish-catching adventure. So, if you’re looking for a cheap and amusing way to kill time – then consider taking a trip to Buccaneer Bay. I doubt you’ll be sorry that you did.

Full disclosure: This review is based on a copy of Rule with an Iron Fish given to Hey Poor Player by the Publisher