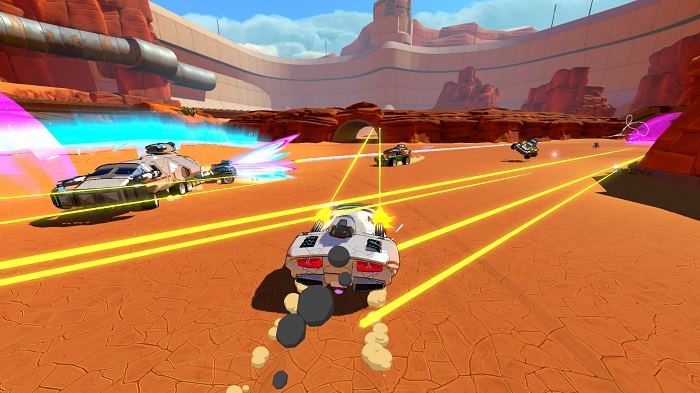 Auto Age: Standoff, the gloriously retro game of vehicular combat inspired by 80’s cartoon such as M.A.S.K., Transformers, and G.I. Joe, is set to make its way to Steam later this month. To celebrate the game’s release at it speeds ahead, developer Phantom Compass has released a pair of new trailers introducing Val Vega and Dark Jaw, the leaders of the game’s two warring factions.

Fair warning: these trailers are pure 80’s concentrate. We assume no responsibility for sudden cravings for Bonkers! chewy candy, Garbage Pail Kids trading cards, or the existential dread of a looming nuclear bombardment by those damn Ruskies.

Check ’em out below:

Set to release on September 21 on Steam and priced at $19.99, Auto Age: Standoff is a vehicular combat game that pits players against one other in either online and local multiplayer battles. The game allows you to customize your high-performance death machines with an arsenal of destructive weaponry including machine guns, missiles, and more.

So, what do you think of this 80’s-inspired game of car combat? Pretty radical, right? As always, we love to hear from you. Sound off in the comments section and let us know.

The Good, The Bad, And The Stealthy Stealth games need not be violent to have tension or high stakes; I remember being so frazzled playing Harry Potter and the…