Goin’ Hard In The Paint 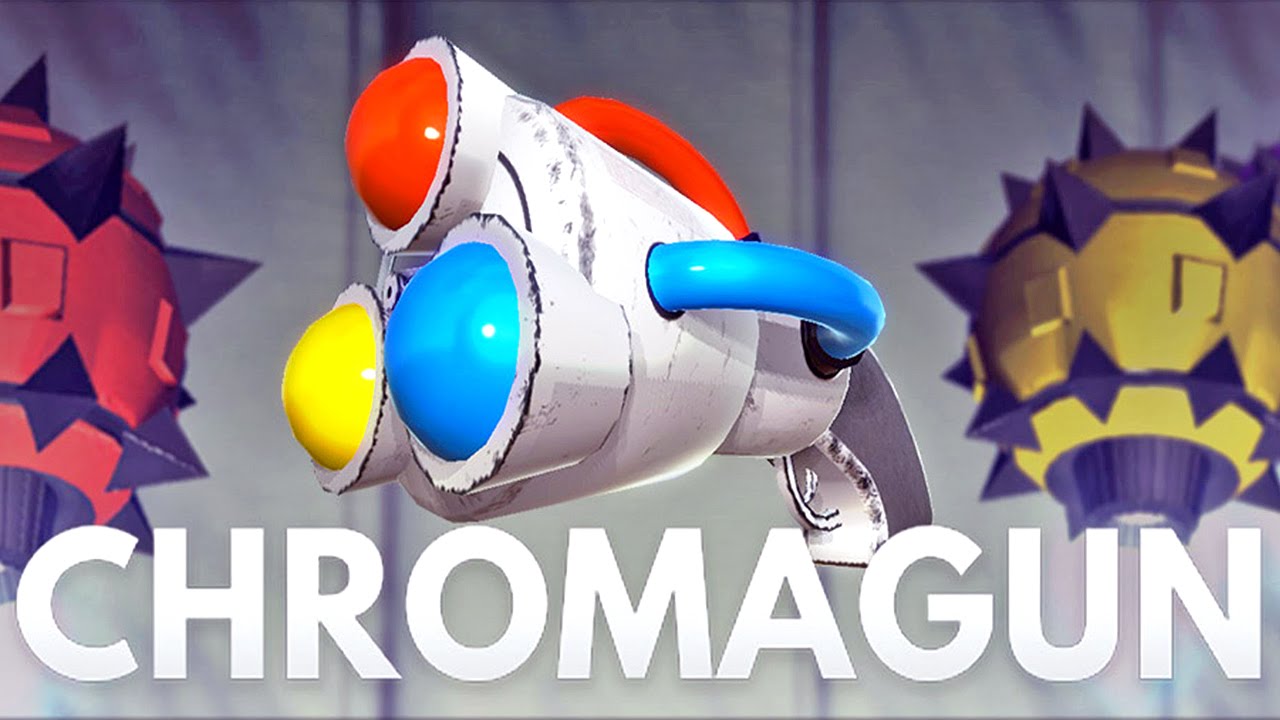 Valve’s breakaway hit Portal has left an undeniable mark on the puzzle game genre since it first released in 2007. And while there have been a number of attempts to replicate its winning formula in the past, no studio has quite been able to capture the same success. ChromaGun is the latest in this line of Portal-likes. Developed by Pixel Maniacs, the game eschews the iconic portal gun in favor of  paint blaster and tasks players with navigating a deadly lab with the power of pigment. It’s an interesting concept, but is its novel premise enough to paint a puzzle-gaming masterpiece? 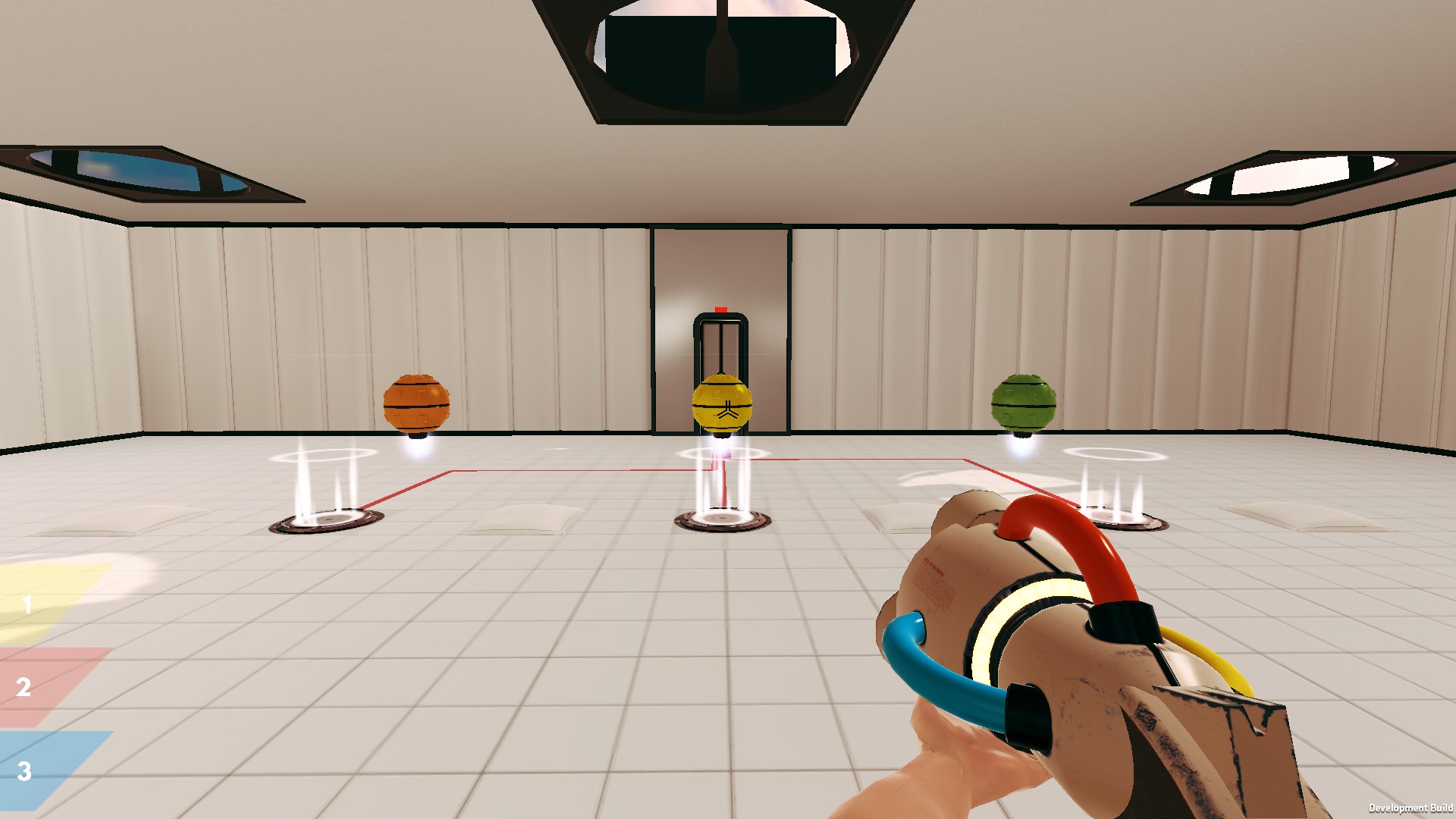 Similar to the game that inspired it, ChromaGun puts players in the sterile corridors of a test lab and tasks them with avoiding hazards and solving logic puzzles in order to progress to the next challenge. The brain-teasers you’ll encounter are all solved with the help of your handy paint gun. Each lab is filled with roving droids who’re attracted to whatever color your happen to paint them. That said, painting a droid red then blasting a nearby wall with a gob or red paint will cause the droid to gravitate towards the wall of the same color. This is especially handy for manipulating droids towards switches which can open doors and allow you to progress.

Things start out simple enough. At first, your gun can only paint objects the primary colors – red, blue, and yellow. But before long you’ll be forced to remember your color wheel as you mix various combinations of colors to create orange, green, and purple. Add to this the addition of roving spiked robots who’ll stop at nothing to turn you into a fleshy pincushion and you’ll find ChromaGun quickly becomes a deceptively deep experience, as one poorly-lobbed ball of paint can render a droid or wall black and unusable, forcing you to start the stage from the beginning. 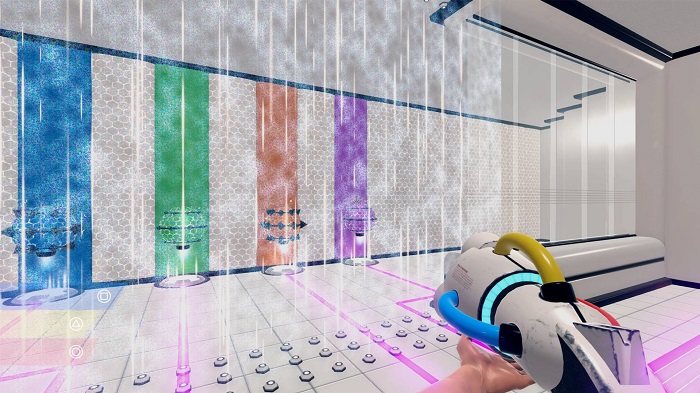 By the end of the game, you’ll need to take advantage of every trick in your arsenal.

That’s not to say ChromaGun is particularly challenging, but it does make you think. New and more complicated mechanics are introduced steadily, as well as more deadly hazards like electrified floors that hinder your progress. For example, eventually you’ll come across that can’t be painted and are adjacent to a panel you need a droid to rest on. To get around this inconvenient situation, you’ll have to color neighboring panels to anchor a droid in between two like-colored walls. This is no big deal at first. However, when you enter a room that has three different switches in front of paint-resistant walls and three droids that need to be manipulated, you’ll have to start flexing that gray matter to find the solution.

There’s a genuine sense of satisfaction that comes from solving these brain-teasers. Though I have to admit the game left me wanting more of them. ChromaGun is a short but incredibly sweet experience. You’ll likely be able to see everything the game has to offer in just three hours. Considering how addicting it is, most players will probably have little trouble plowing through the entire experience in a single sitting.

A Different Shade of Portal

ChromaGun is a blast while it lasts, and a self-aware one at that. Developer Pixel Maniacs‘ proudly wear their Aperture Labs logo-emblazoned inspiration on their sleeve, and it’s evident for the duration of the game’s short campaign. While it largely succeeds in setting out what it aims to do, there are a few issues that hold this pigment-flinging romp back a bit. For starters, the game’s frame rate is occasionally spotty at times, which is surprising given the game’s minimalist visuals. Additionally, there’s a rather annoying motion-blur effect going on that is nothing if not disorienting. Thankfully, this can be disabled with a quick trip to the options menu.

While the visuals do have a few issues, I’ve no complaints whatsoever ChromaGun’s sound direction. The blobs of paint you launch make a satisfying “whoosh”, and the blipping and beeping of roving droids is suitably clinical. As for the music, the game’s soothing soundscapes are nothing short of sublime. This collection of pulsing, electronic melodies is borderline trance-inducing and will stay with you long after you put the controller down.

ChromaGun is by no means a Portal killer. However, it is a deeply satisfying puzzle game held back only by its brevity. If you’re looking to add some color to your gaming library and don’t mind the quick-fix it offers, this is one puzzler that’s well worth your time.

Full disclosure: this review is based on PS4 review copy of ChromaGun provided to Hey Poor Player by the publisher.

Si vis pacem, para bellum When XCOM: Enemy Unknown came out in 2012, I didn’t know what to expect. Of course, I love strategy games; this is evident by…