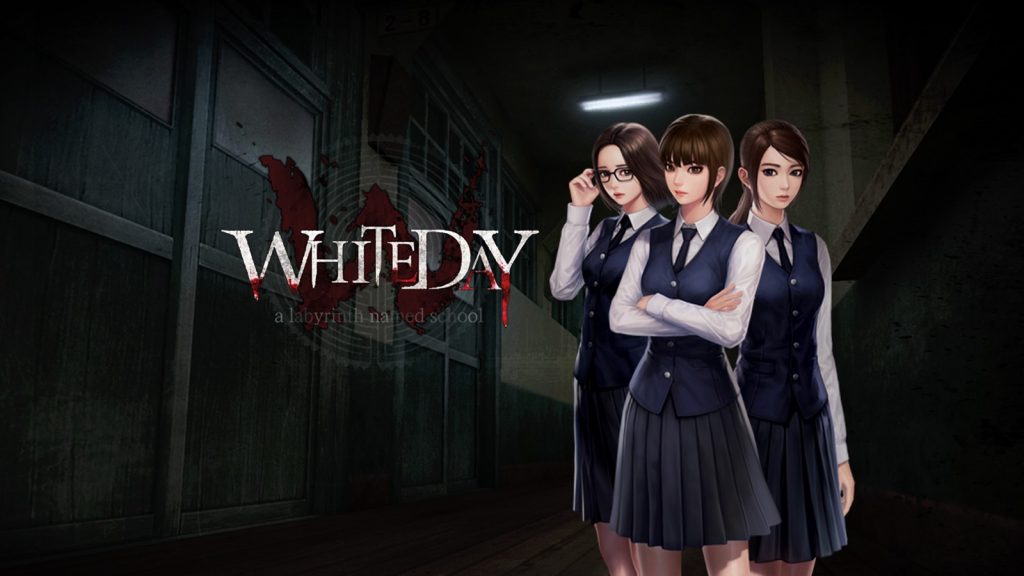 If you’re a fan of survival horror games you may already be aware of The Korean title White Day: A Labyrinth Named School. Originally released in 2001, White Day frightened critics and gamers alike with it’s creepy ghost tale set in an location that Asian video game developers seem to love creating horrific stories around  – a high school. So, as with most well-received games from past generations, White Day: A Labyrinth Named School received a remake, this time bringing it over to the western audience. Again, critics and gamers applauded the game, praising it’s creepy atmosphere, chilling ghost story, and intricate puzzles. Even though the horror title was highly regarded, the game had one major fault. This 2015 release was limited to iOS and Android devices, leaving console and Steam gamers wondering what they were missing out on. Well, wonder no more, horror fans!  The White Day remake has finally made it’s worldwide big screen debut! So how well does a 16 year old survival horror title stack up to the horror games of today?  Let’s find out.

Wait, Is This A Love Story?

White Day starts off like a cute high school love story.  Our main character is about to make a move on his crush, So-young, who is reading through her journal in a local park. While she is flipping through her book she notices a picture stuffed in between a couple of pages. She decides to remove it to get a better look, but as she’s about to view the picture a large gust of wind blows it out of her hand and directly towards our character, who helpfully snatches it up before the wind can take it any further. So-young rushes over to get her picture, but just as she’s about to talk, her friend calls over to her and she walks away without even saying thank you. But you still have an in!  As So-young hastily rushed off to meet her friend she mistakenly left her journal on the park bench. Written on the cover of the journal  is “Junior Homeroom 8”. Time to head to the school and get this journal back to your crush! 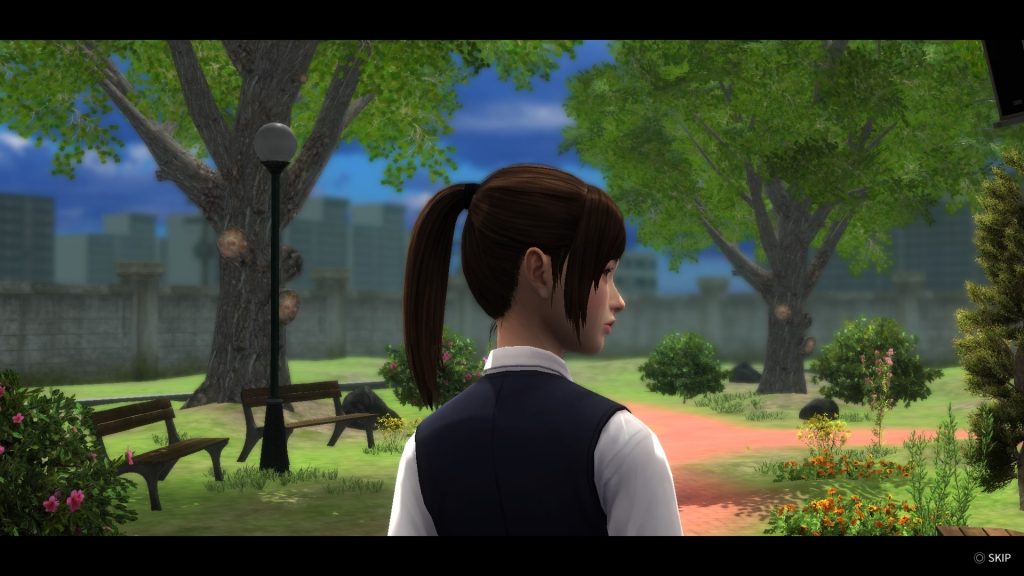 She could have at least said thank you!

This is where things get odd.  For some unexplained reason our hero decides to go to the school at 10 p.m. to get this book back to So-young. Now, I’m not too sure about Korea, but here in the United States our schools usually dismiss around 3 p.m., and most teachers are gone by 6. I’m guessing it’s the same in Korea considering that when we get to the school there is no one in sight…well, not yet anyway.  As we walk through the school’s main gate it slams behind us and a “force” seems to draw us into the front doors, which also quickly slam shut.  Yep, we’re stuck here, and it’s dark, and there are a bunch of creepy noises surrounding us.

This is a survival horror game through and through and fans of the genre will feel right at home. As expected, most doors are locked, tons of memos are scattered around, and odd nick-nacks that seem to be in the shape of keys are tucked away in dark corners. Notes will provide clues on how to use the nick-nacks, and other notes will explain what kind of creepy stuff has been going on in this school. The save system revolves around finding felt-tip pens (similar to Resident Evil’s ink ribbons), and your backpack can be accessed at any time to review any of the notes or items that you’ve found around the school. This game knows it’s roots and it wears its survival horror badge proudly on its sleeve. 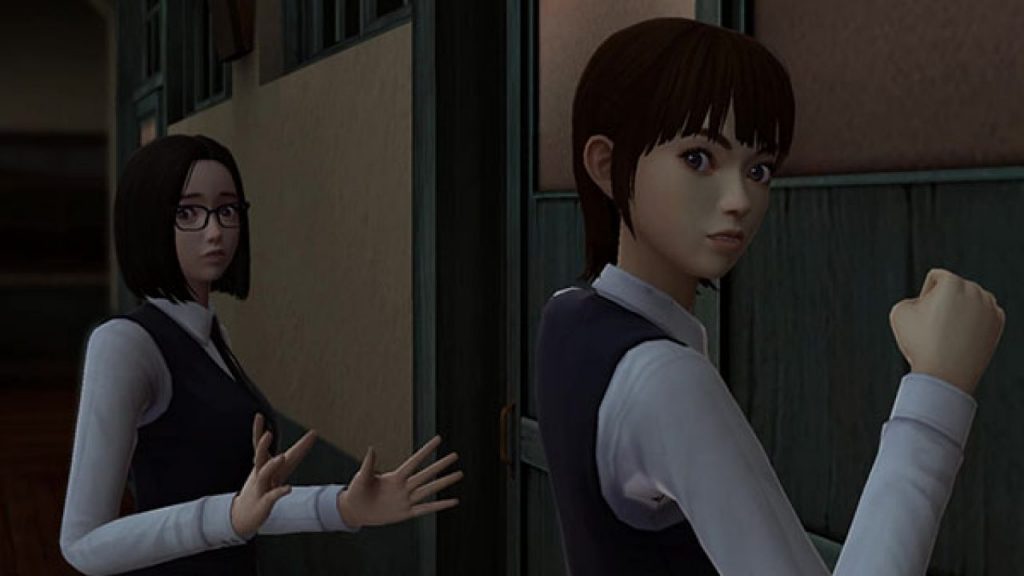 What’s the matter? Do I frighten you?

Since this is a survival horror game you’ll eventually have to…well…survive. Early on you’ll come across what can be considered the game’s main enemy – the school janitor.  This dude is creepy, and walks around the school grounds with a whistle in his mouth and flashlight and baseball bat in his hands. The player must avoid this guy at all costs because if he manages to see or hear you, he’ll give chase and pummel you with his baseball bat. This creep will investigate any noise that you make or any classroom that has its door left open.

Toward the beginning of the game this guy is a real menace, but once you figure out the areas that he can’t access he just becomes an annoyance. There are several ways to avoid him, the main one being the eye indicator that appears onscreen whenever he is near. Make sure to hunker down whenever the eye indicator pops up, and eventually it’ll disappear, meaning it’s safe to explore again. His Flashlight and the sound of his keys clacking together are also dead giveaways, but the eye indicator will usually pop up before you see or hear any of these. If he does manage to catch you and hits you with the bat, you can always heal by eating the consumables that are found around the school, or by purchasing food from the vending machines with the coins that are scattered about. A lean or peek feature would have really made avoiding him easier, but toward the end of the game this guy just becomes a miniscule obstacle that gets in between puzzle solving. 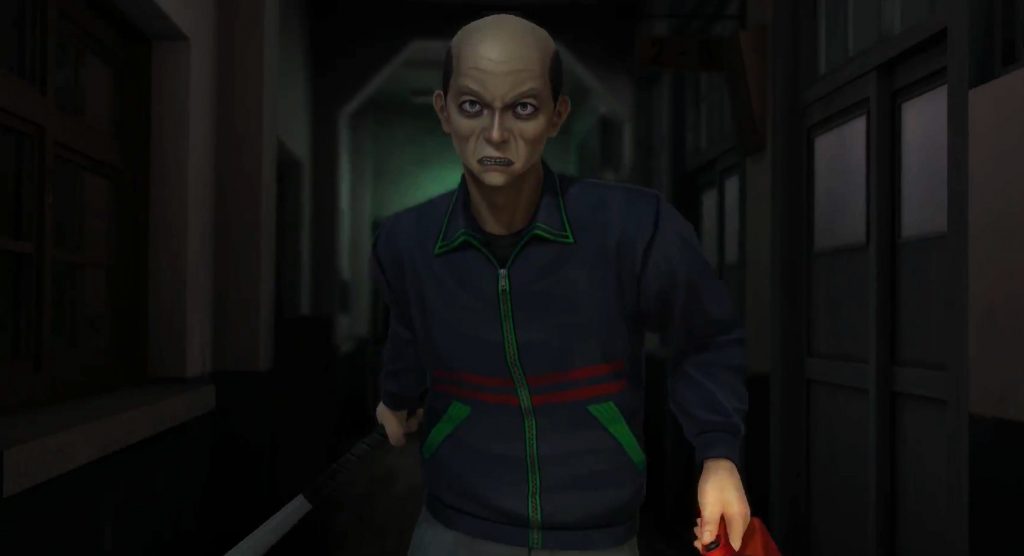 That’s one pissed off janitor!

I Hope You’ve Been Studying

Speaking of puzzles, White Day: A Labyrinth Named School has some really good ones and some that contain bugs that may cause you to lose hours worth of progress. Most puzzles require some major brainpower, something we don’t see in a lot of games nowadays. I’m embarrassed to say that a few of these had me stumped. More often than not, a view of my backpack contents would help me with any problem solving issues I was having, but I have to admit that I hit the ol’ YouTube a few times to advance the game.

One particular chalkboard puzzle confused the heck out of me. Even after watching a few videos, I still don’t understand how I managed to solve it. It’s also worth noting that I came across a horrible bug when solving a picture puzzle. Upon moving picture pieces around on a frame my character clipped through the wall and ended up in a part of the school that I had yet to explore. I was not able to get back due to not having acquired the key, and I had to revert to my previous save ultimately losing an hour of progress. Hopefully this bug gets squashed soon, but as of this writing it’s still there. 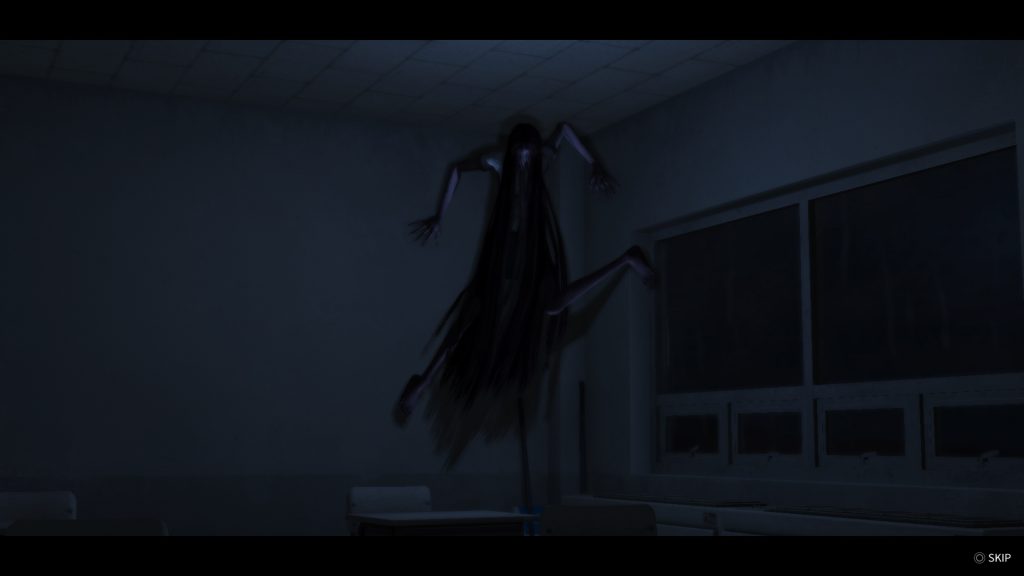 The Gift that Keeps On Giving

Once all of the puzzles are solved (and bugs avoided), you might wonder if there is any reason to replay White Day: A Labyrinth Named School.  You’ll be happy to know that there is!  There are several endings to unlock, although I’ve found unlocking them to be pretty cryptic.  Throughout the game you’ll encounter other students who are also trapped in the school. Depending on how you answer their questions will determine what type of ending that you’ll get. Some of the responses that you’ll be able to choose from are extremely vague. I wasn’t sure if I was changing the story for better or worse, which makes it hard to determine what kind of character I’m making myself out to be. Players who’ve played through the story on easy should also consider another playthrough, since there are more ghostly encounters on higher difficulties. My first playthrough took me 6 hours, but now that I’m familiar with the puzzles, I’m sure I’ll be able to cut that time in half on future playthroughs.

Gamers looking for a groundbreaking visual experience should look elsewhere.  Now, I’m not saying that this game looks horrible, but it definitely won’t be remembered for it’s graphical prowess. Characters are stiff, faces look odd, and textures seem to be equivalent to graphics you would have seen during the Playstation 2 era. Character animations are off putting as well, especially the janitor’s.  It took me out of the horror experience whenever I saw a door closing behind a character even though they weren’t reaching back to pull the door shut. Actually, maybe a ghost was closing the door! Nah, I can’t give them that much credit. The sound, on the other hand, is impressive.  Walking through the school’s desolate hallways is creepy enough, but when the eerie silence is broken by a tree scraping against the window, or worse yet, the moan of a ghost, you better have an extra pair of underwear ready. Because of this game, the sound of rattling keys will have me looking over my shoulder for the rest of my life. Thanks, video games!

Fans of survival horror should jump on White Day: A Labyrinth Named School right now. It’s been awhile since I played a survival horror game this good. If you’re not a big fan of the genre, this game is not going to change that. It’s tough, the puzzles are thought provoking, and the scares are mostly genuine (minus a few jump scares). The janitor, although weak toward the midpoint of the game, did offer some terrifying moments, and the ghosts are all horrific in their own right. Other than the bug that I happened to stumble upon, I loved exploring every nook and cranny of the school. For anyone who has played this on their phone when it was released in 2015, I strongly suggest giving this a go on PS4 or Steam. The frightening tale of White Day: A Labyrinth Named School should be experienced on a screen that is larger than the palm of your hand.

Full disclosure: This review is based on a -PlayStation 4 review copy of White Day: A Labyrinth Named School given to HeyPoorPlayer by the publisher.

Enter the Survival Horror   If you’re a fan of survival horror games you may already be aware of The Korean title White Day: A Labyrinth Named School. Originally…