They just keep rabbiting on! 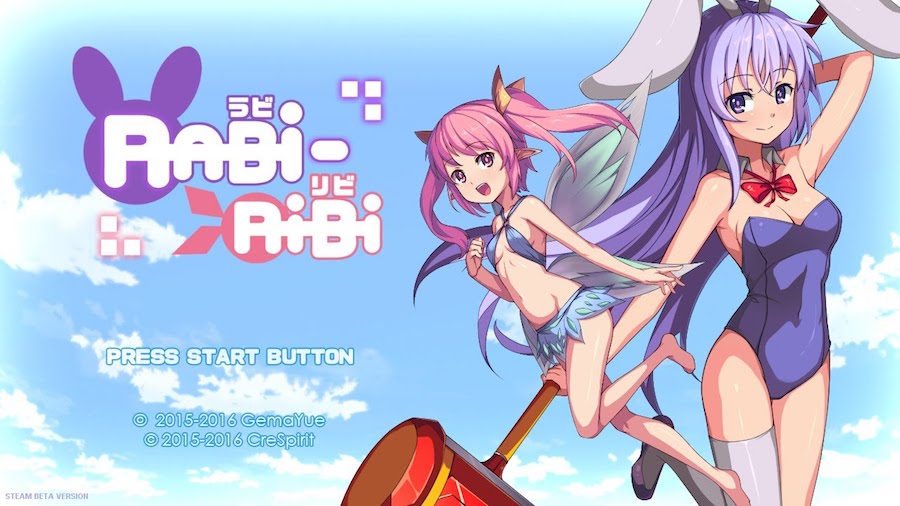 Rabi-Ribi is a game about rabbits and the anthropomorphized women they turn into. Specifically it’s about a bunny rabbit named Erina who is magically transformed into an aptly leotarded woman. She’s on a quest to find lost friends and to get to the bottom of a mysterious force that has infested with bunny obsessives (who try and nab her on sight). The Ribi part of the Rabi-Ribi equation comes in the form of Erina’s fairy sidekick Ribbon – who is so scantily clad she’s dressed in pretty much just a couple of, well… ribbons. So far it might sound like only anime enthusiasts would be interested in Rabi-Ribi, but its surprising excellence transcends its initial target audience. 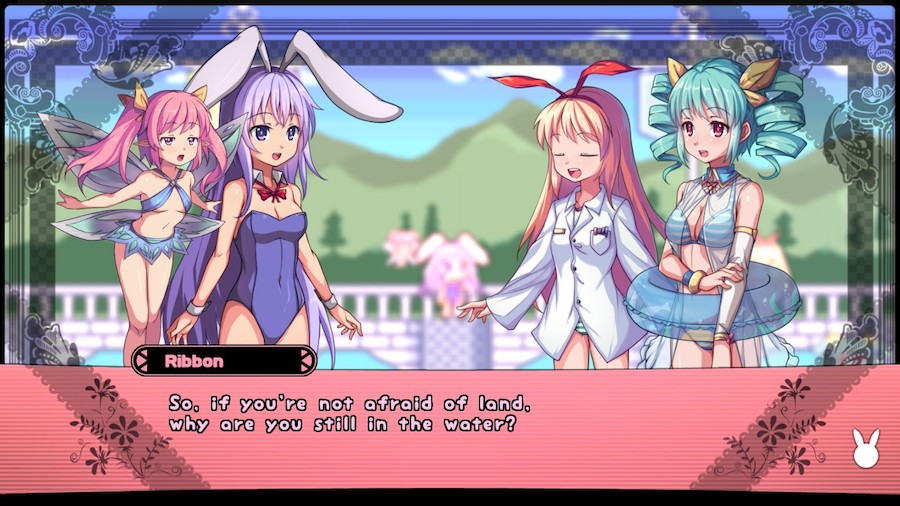 Rabi-Ribi has a surprisingly in-depth story, which plays out largely through visual novel style cutscenes.

Rabi-Ribi threw me off completely, as it started out as just a standard platformer with the traditional jumping over inexplicably existant of pits of spikes. But it soon started to show signs of being very special indeed when I came upon my first boss battle. Boss battles in Rabi-Ribi are frequent, and brilliant. Usually, Erina will come upon another animal girl/monster girl whose help she needs in her quest. Then there will follow some amusing misunderstanding, such as Erina being mistaken for one of the suddenly ubiquitous rabbit-cosplaying perverts roaming around. Naturally, Erina’s desperate appeals for a reasoned discussion tend to fail and a life or death battle ensues!

Boss battles are highly varied and will test the dexterity of your thumbs and the sharpness of your mind in equal measure. Every boss has several different attack patterns. Mad scientist Cecina will criss-cross the screen with flames for you to duck under whereas kooky cat-girl Iris will turn the screen into a veritable checkerboard of electrified death. In traditional bullet hell shooters, you’re merely moving around a cacophony of beams and deadly dots. In Rabi-Ribi you’ve also got gravity to contend with! Luckily Erina can learn plenty of moves to help her dodge and deflect death, including a slide and a rechargable medallion that gives her a split second aura of invincibility. It’s this extra complexity to the bullet dodging that makes every boss so intense and fun to fight.

It’s not just defense that there’s an extra element of complexity to either. Erina herself has a very wide arsenal of attacks, including a carrot bomb to catch enemies on lower platforms and destroy terrain. Attacks like uppercuts and downward smashes with Erina’s hammer allow her to string together combos. A combo bar grows with every hit and decreases with inactivity or taking damage, so there’s always that compulsive drive to find a way to keep up the punishment on your opponent so you can get the highest combo rating for each boss. I was able to replay boss battles later on, and Rabi-Ribi was one of the few games that really stirred me to test my mettle at perfecting every skirmish

Down the Rabbit Hole of Deep Gameplay 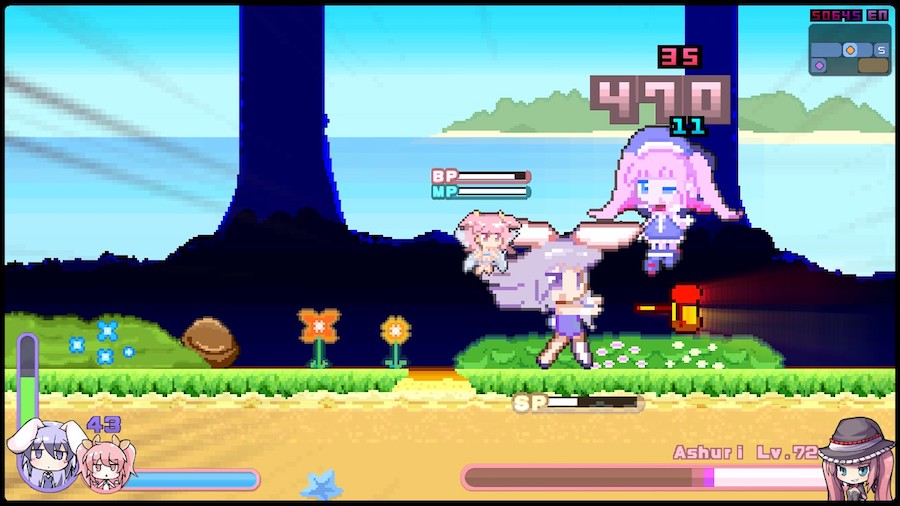 The girls of Rabi-Ribi will give you a cute little wink while getting smashed with a hammer. That’s dedication!

Since Erina’s melee attacks have a limited stamina bar that takes few few seconds to recharge, you’ll have to rely on Ribbon’s magical attacks to keep up the momentum. Ribbon’s magic comes in many different forms. For example: a yellow sceptre fires off beams that cause good sustained damage over a long range but isn’t much cop for flying enemies. You can charge Ribbon’s attacks too – her green magic emits plumes of energy which arc up and down, which is perfect when getting swarmed by malignant fairies!

Ribbon also has her own array of special attacks with a wide variety of special effects, including the abilities to heal and speed up Erina. Rabi-Ribi has an appropriately double-barrelled name, not because the game is about posh English people, but because it’s all about frantically synergizing the diverse abilities of both fairy and bunny (girl). 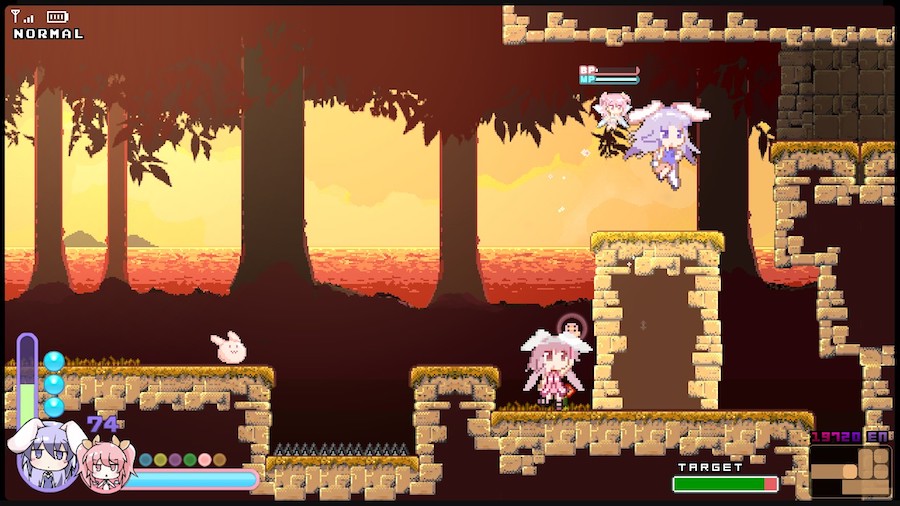 Erina’s world is so much bigger than the hutch she once lived in.

On top of having an in-depth battle system, Rabi-Ribi has vast worlds to explore. Those looking for a sprawling metroidvania type of experience will be able to gorge themselves on 2D exploration. Every zone has no end of tantalizing goodies on display – upgrades that can improve your health, speed, stamina and mana, not to mention equippable items that give you a range of other handy passive effects. Usually finding these items will require some cleverness in memorizing an area that will later become accessible through a new ability, or guessing what terrain might be destructible to lead you to the prize. Despite Rabi-Ribi being so focused on skill and twitch reactions, there’s more thick, juicy character-building and treasure seeking to sink your teeth into than most RPGs!

What’s especially handy is the ability to choose not only between different difficulty modes, but also how much you want boss difficulty to scale up as the game progresses. More casual players like myself can choose to have bosses scale to their “level” of upgrades. More hardcore players will have the option of needing to really search and backtrack across maps for every upgrade to get the statistical edge on the bosses you’ll encounter. 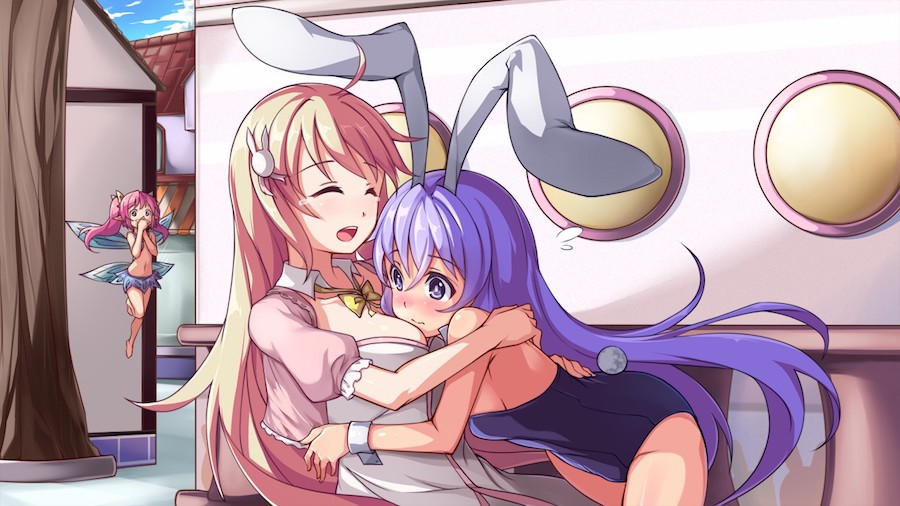 What deserves further special praise is Rabi-Ribi’s music. Almost every boss battle has its own unique theme and fits with who you’re fighting. The beats range from piano-heavy 90’s style house music to chirpy chiptunes to synthwave – and a glorious fusion of the above. It really had me tapping my foot like a manic bunny while dodging cascades of glowing bullets (and I’m sure all the energy drinks I gulp down like water had nothing to do with this).

Likewise, the combination of pixel-art with visual novel for the dialogue segments works well. Every girl in the game is well-detailed with multiple expressions for every paperdoll. And their sprite counterparts are just adorable in how they capture the essence of each girl in little bundles of lovingly animated pixels. Furthermore, there are plenty of CGs to unlock, such as when Erina is reunited with her master Rumi, who hugs Erina deeply into her bountiful bosom! You can handily view these later in gallery mode if you’re into that sort of thing!

Rabi-Ribi is a brilliant combination between platformer and bullet-hell shooter. The effortlessness of how these genres are melded together is evident in the superb scores initially tossed at it when the upstart indie title was released on Steam last year. This Playstation 4 release turns out to be a match made in heaven as the console controls fit well with the action.

However large a developer’s budget might be, there’s just no substitute for inspired design, which Rabi-Ribi has in spades. Rabi-Ribi is a remarkable achievement for an indie studio, and how they’ve managed to see release on Playstation network is heartening indeed. With frenetic, skill-focused battles, cavernously deep mechanics and an aesthetic that’s a perfectly pastel-coloured pixel-art pastache, you’ll be hopped up on Rabi-Ribi for sure!

Full disclosure: This review is based on a Playstation 4 review copy provided to Hey Poor Player by the publisher.

Shenron, I wish for a worthy sequel! Every year since 2002 (with a slight exception for 2013), there has been a new video game in the long-running and much-beloved…