Earlier this year, I had the opportunity to review a game called Hakuoki: Kyoto Winds for the Vita. Although I’ve played my share of visual novels, I can’t say that too many of them involved me romancing a slew of savvy samurai. But that one did. And, despite being completely out of my element when it came to Otome games, I ended up enjoying it quite a bit. It had pretty much everything that you could ask from a visual novel — an excellent story, gorgeous artwork, and top-notch voice acting (at least I think so… I don’t actually speak Japanese). I had assumed that, after my review, my time with Hakuoki was over. Fate seemed to have other plans in store for me however, because I once again found myself flirting with danger — and Shinsengumi — with the PC port of Hakuoki: Kyoto Winds.

Hakuoki: Kyoto Winds takes place right at the end of Japan’s tumultuous Edo Period. It follows the story of Chizuru Yukimura, a girl who finds herself traveling to Kyoto in search of her missing father. Unfortunately, our hapless heroine’s troubles don’t end there. Within the first day, Chizuru finds herself thrust into a chain of events which sees her getting mugged, almost murdered, saved, almost murdered again, and, in the end, strong-armed into “joining” a group known as the Shinsengumi — a special police force in charge of protecting Kyoto (can’t a girl get a break?). 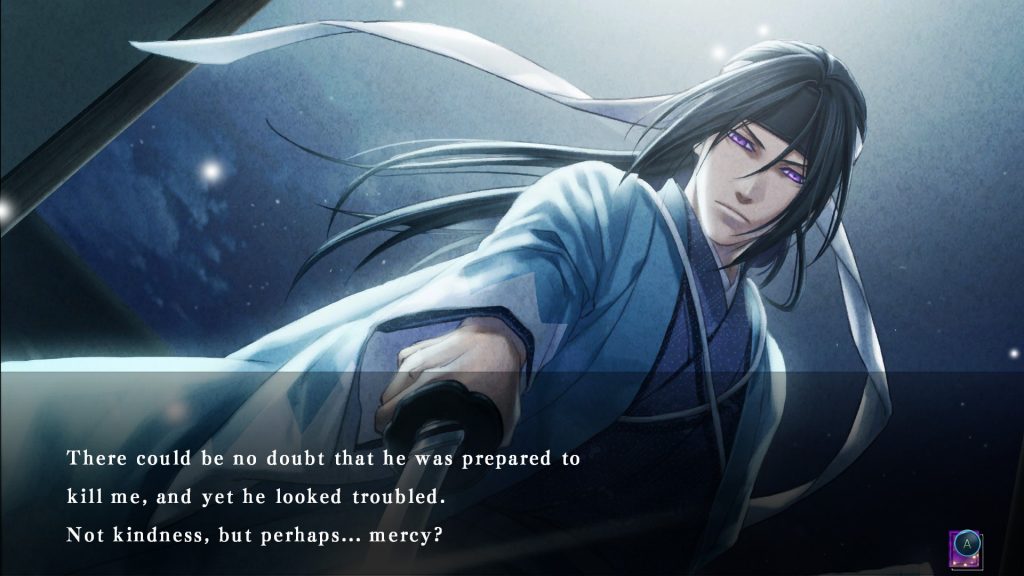 You can call it whatever you’d like, so long as it means that I won’t be dying tonight!

Fortunately, Chizuru seemed to have used up all of her bad luck (for a while anyway). She soon finds out that Shinsengumi — the very group that abducted her — was also working with her father right before he disappeared. And they too were looking for her. Believing her to potentially be an asset, they allow her to work with them — and, as an added bonus, they decide not to kill her! Talk about a win-win!

All joking aside, Hakuoki has an amazing story. One that, if you can’t tell, doesn’t follow traditional Otome rules. Despite featuring a plot involving a heroine who falls in love, romance isn’t the overarching theme of the overarching narrative. Instead, it mainly centers around personal struggle and, surprisingly, violence. Hakuoki takes place during a time where there was quite a bit of civil unrest, historically speaking. And, while this game does take some major creative liberties with certain things, it does an excellent job of emulating the very real tension that must have been occurring during that time. 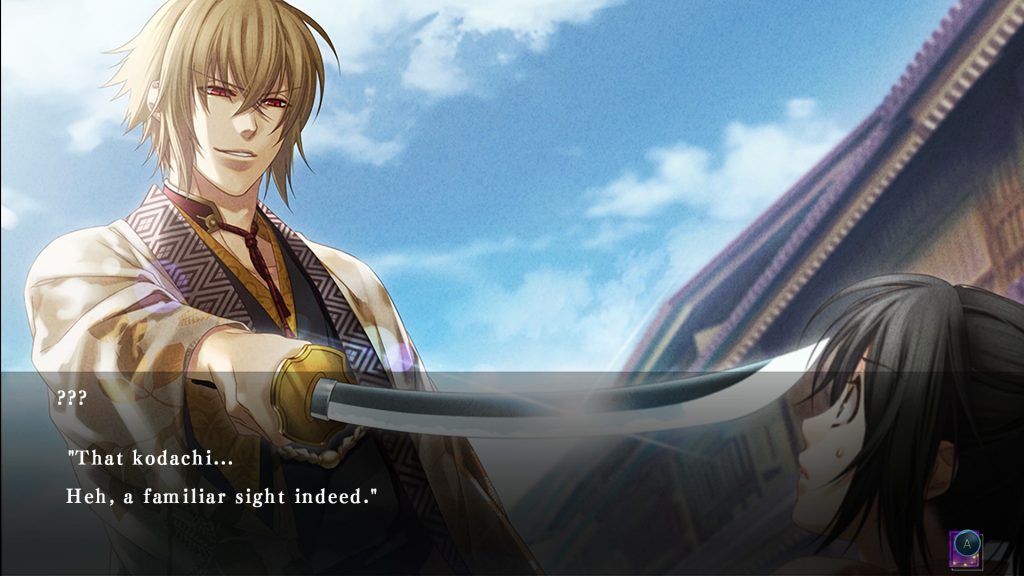 Truthfully, I don’t have a ton of experience to go on when it comes to Otome games. Or any kind of dating sim, really. Still, I feel as though Hakuoki treats its romance mechanics differently than many others would — mainly due to its realistic approach. Unlike with many romance-centered games out there, Hakuoki doesn’t wrap a story around romance. It wraps romance around a story. A story that requires you to interact with everyone involved.

It’s also important to keep in mind how the story started out, and what it’s truly about. Because of what happened during her first day in Kyoto, Chizuru, by all accounts, should have ended up on the wrong side of one of the Shinsengumi’s blades. But she didn’t, instead becoming a captive. A captive who, over time, becomes a valuable ally. While this pacing may be slow for those who want to “just get to the good part”, it ends up, in my opinion, making the bonds that you do form all the more worthwhile.

Despite initially taking you hostage, Chizuru soon finds herself forming bonds with the Shinsengumi. Such close bonds, in fact, that she ends up becoming more than friends with one of them… But which one is up for you to decide! After all, although it might be easy to forget sometimes, this is an Otome visual novel! You’ve got to have some of that romance going on somewhere. …You know, in between the fighting, and the countless deaths. 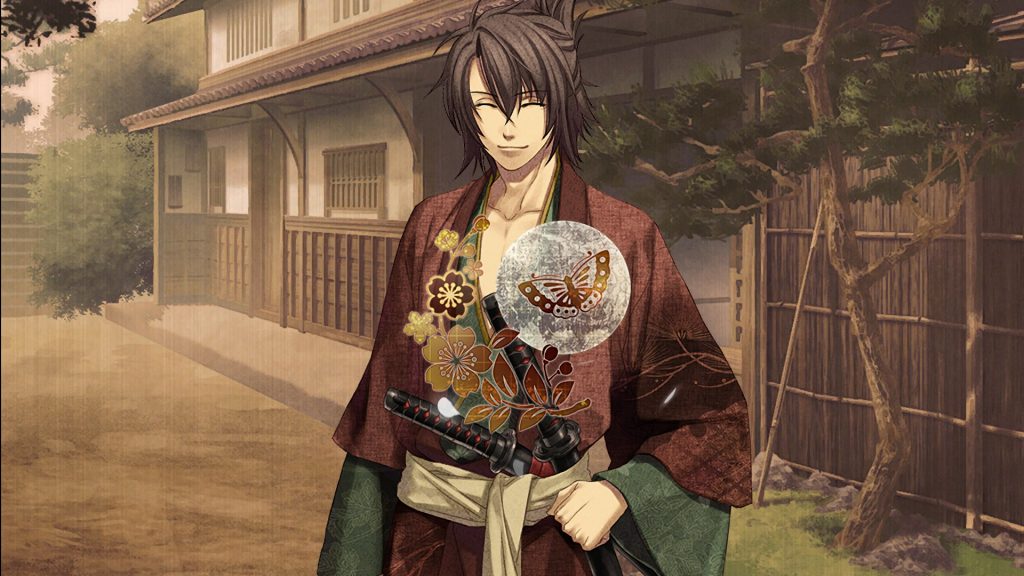 If love’s what you’re after, then follow those butterflies!

Considering how intense the fighting in this game can get, you’d think that the romance would get just as intense. But you would be wrong. On the contrary, this game’s romance is incredibly subtle. Chizuru isn’t a head-over-heels in love type of gal, and the Shinsengumi’s anime-esque appearances belie a rugged toughness most likely found within the actual Shinsengumi when they were alive. Once again, I personally found myself enjoying this. While I’m definitely not immune to cutesty romance, I very much enjoyed the “delayed gratification” approach that this game takes. Relationships aren’t easy. Neither is falling in love. The slow, cautious, level-headed approach taken by both Chizuru and Hakuoki‘s bachelors makes romance a rare sight. But, because of that, any kind of heart-to-heart has a very powerful effect on the player.

It’s also worth noting that Hakuoki‘s approach to romacne doesn’t fall in line with traditional dating sims in a mechanical sense. It is, by all accounts, a visual novel through and through. Rather than giving the players plenty of instances to woo the samur-guy of their choosing, you’re typically only presented with a handful of chances to strut your stuff. These choices generally pop up during critical points within the game’s story — yes, that includes fights — so it’s important to make sure that you choose correctly. 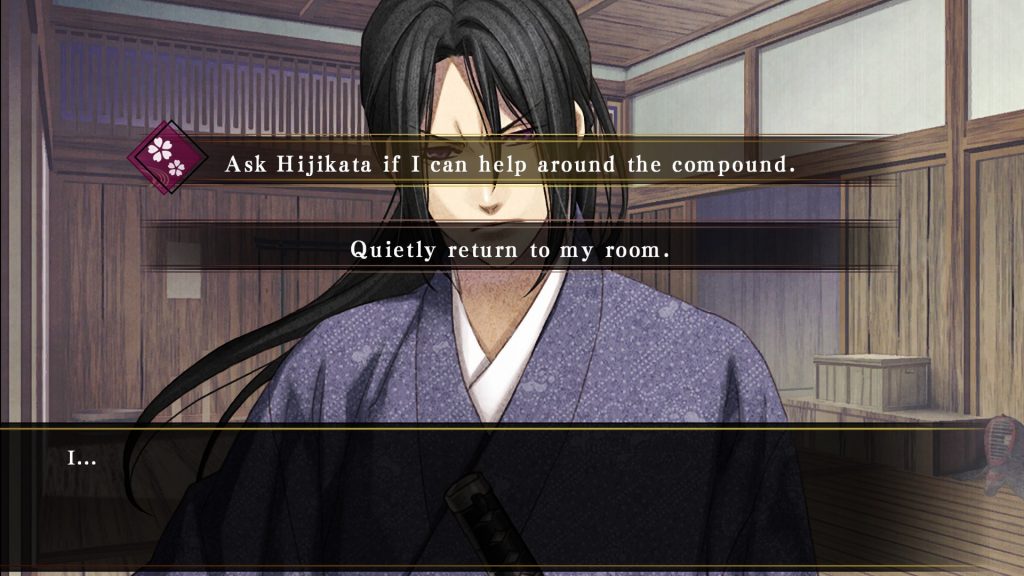 Even if a choice seems inconsequential, it’s still a good idea to take it seriously.

I know that I’ve already mentioned it, but it bears repeating; this is not a typical romance situation. Rather than treating your potential love interests as such, it’s important to treat them as what they really are; proud warriors. The boys in the Shinsengumi are far from normal VN romances. They’ve dedicated their life to the sword, and it’s best to remember that. Often times, being overly protective or coddling them won’t get you anywhere. Generally, you’re going to want to impress them if you want them to love you. This can make for a bit of confusion at first — some of these guys initially ended up being so fickle that I could never figure out just what it was that they wanted to hear — but once you get in the grove of things it becomes much easier.

Hakuoki: Kyoto Winds also features even more shino-boys to romance than ever before, several of which weren’t featured within the original Hakuoki, as well as several non-romance options that were added just to enhance the story. While adding in characters, especially to a visual novel, has the potential to feel severely shoehorned, Kyoto Winds managed to avoid that. Each new character felt like they belonged within the game. In fact, it’s hard to discern who’s new and who isn’t in the first place!

A Delicate Flower No More

Yet another enjoyable aspect of Hakuoki‘s story was Chizuru herself. Although a protagonist and, by definition, an extention of the player, Chizuru is her own person. Far from being the blank slate which plenty of games present you with, Hakuoki features a main character with a legitimate personality. This could just be the dissonance speaking, but playing through the game felt less like I was Chizuru, and more like I was guiding her. When the game began, Chizuru barely had the courage to walk around a city by herself. And her luck was so bad that she almost died a handful of times on the same day. 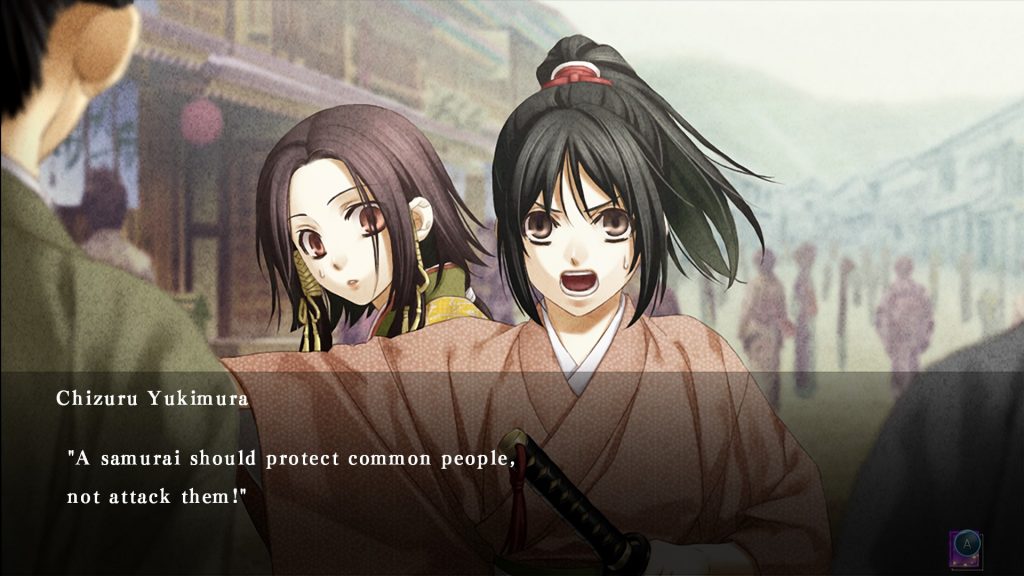 But, as the game progresses, she develops quite a lot. Regardless of which path you choose, Chizuru matures into a confident young woman. A confident young woman who is no longer afraid to stand up for what she believes in. Or at least, not quite as afraid. And she manages to do this without completely changing herself as a person. Her gentle nature and naivety are never completely erased, they just have additional traits compounded upon them. Developing a character in a way that is subtle yet still noticeable isn’t an easy thing, but Hakuoki definitely got it right with Chizuru.

No visual novel would be complete without asthetics, and Hakuoki killed it just as well as the Shinsengumi kill their enemies. That was probably a bad analogy, but you get what I mean. Right? They’re good. Very good, in fact. Character portraits and backgrounds alike are a site to behold, and the attention to detail is obvious at first glance. CGs, perhaps the most important part of any VN, are especially impressive, and unlocking them felt like a reward in and of itself. 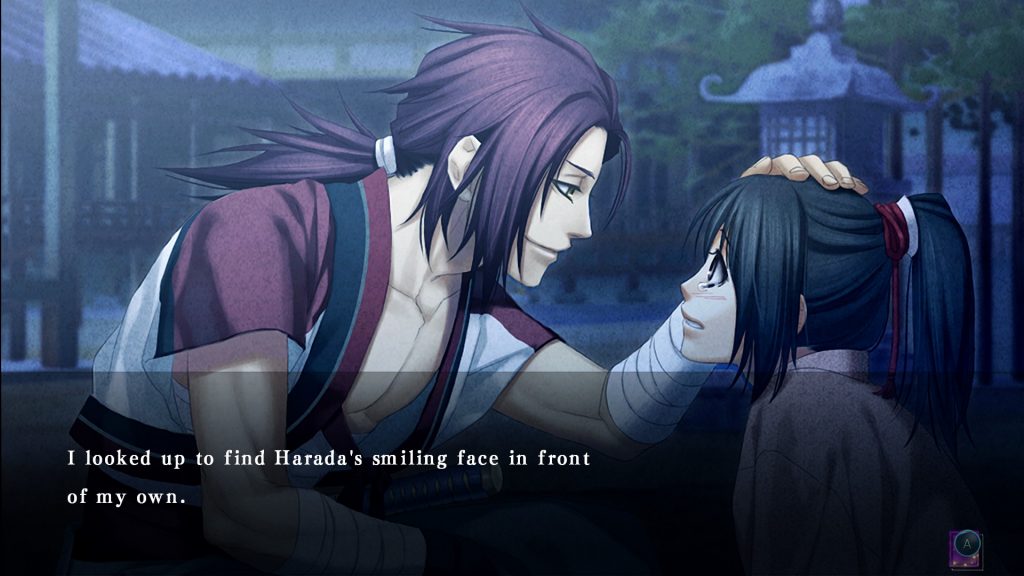 All of the visuals are, of course, complimented by quality audio as well. Not only does Hakuoki feature an excellent Japanese VA cast, but also a soundtrack that is very nice on the ears. Truthfully, it’s a little short in terms of number of tracks. I didn’t find that to be a big deal, however. Visual novels aren’t known for their particularly large OSTs. Hakuoki may not have a lot of songs, but all of them are solid.

My time with the Shinsengumi came and went for the second time. And once again, I found myself quite pleased with the game. Despite its somewhat short length, Hakuoki: Kyoto Winds still holds up as an excellent visual novel. It’s so good, in fact, that it managed to grab the attention of someone like myself — who has almost 0 experience with the Otome genre — not once, but twice. If quality visual novels are your thing, then Hakuoki: Kyoto Winds should probably be your next purchase. Also, and I might be veering off subject here, it’s got some of the most entertaining achievement names that I’ve ever seen.

Full disclosure: This review is based on a copy of Hakuoki: Kyoto Winds given to Hey Poor Player by the Publisher