Judgement according to the panels. 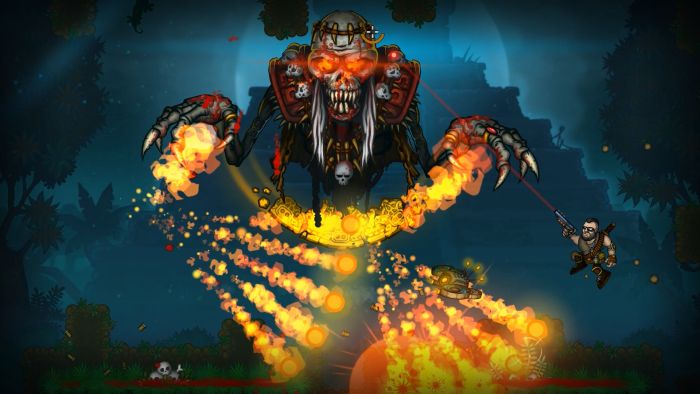 They go together like peanut butter and jelly, really. But despite this obvious pairing, very few games actually draw inspiration from the comic medium directly. Over the years, we’ve had a few attempts, such as the classic Comix Zone for the Sega Genesis oh so many moons ago. We definitely need more titles with that mindset, and it seems fortunate that Badass Hero is destined to fill that interesting little niche. I won’t lie, the name alone intrigued me. I mean, come on: “Badass Hero”. Who wouldn’t want to play that? Can you imagine the outrage if this were a game released in the 1990’s?

But I digress. Plot-wise, the game casts players in the role of the titular hero, a comic book character who is metaphysically aware of his or her status as an ink creation. Once a proud comic creation, the hero has fallen out of grace due to a corrupting influence in the comic realm. It’s up to him or her to reclaim their former glory by revisiting old issues and setting the record straight once more.

A comic that’s no laugh matter. 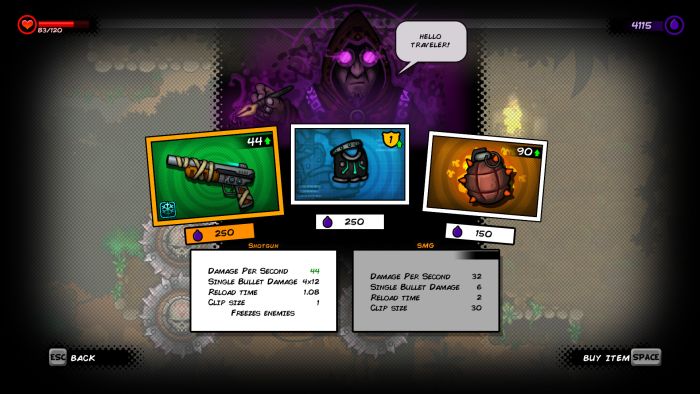 The playing field is presented as a page in a comic book, which each room serving as a panel. There are various exits and entrances, places of interest, deadly traps, and of course, enemies galore. The layout of each page is also different upon play. That’s right: procedural generation yet again. I personally feel that the concept is overused these days, as a hand-crafted level by a human being will almost always be superior to a pre-defined series of rooms and dungeons randomly stitched together. Nonetheless, Badass Hero makes it work, as the rooms are interesting and challenging enough in their own right.

Naturally, randomness is the order of the day, and some runs are great while others tend to pit you against rather uneven odds. Dying is of course not only unavoidable but necessary to hone your skills, much like any roguelike worth its salt. The game is also has a lovely visceral quality to it, as guns are loud and enemies explode into chunks of gore. It’s not difficult to grab more powerful weapons early on, highly increasing the shooting pleasure. Though fundamentally a roguelike, it is an action game first and foremost, and a most satisfying one at that. And as an extra incentive to kill, players are rewarded with currency in the form of… ink blobs and skill points. Use these to permanently upgrade your stats, tweak your weapons, and even learn new abilities. It’s fun, and it requires a degree of immersive dedication from the player.

You’d better draw your own conclusions. 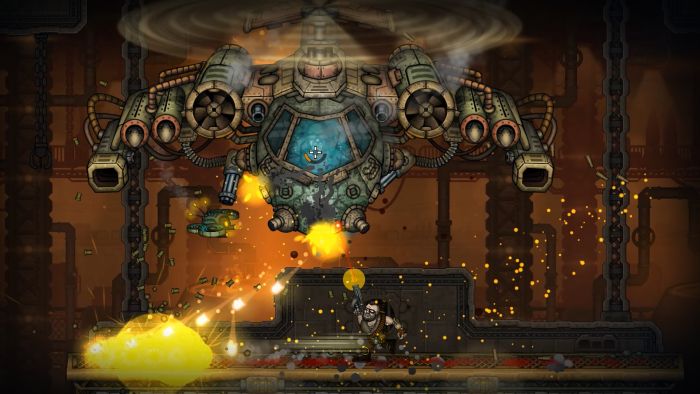 The game is still in early access, and various ideas are either not implemented or are in a very basic state. For example, a weapon loadout upon start is planned but not yet functional as of the time of writing this preview. Chiefly, however, the main problem is refinement and balancing issues, as well as working out the designs of the rooms. Enemy and trap placement can be extremely difficult to avoid, especially when some of the issues hurl dozens of projectiles your way once they have line of sight. However, the art and audio are absolutely gorgeous, completely nailing the comic looks and providing great acoustics to enhance the mood.

Badass Hero still needs a bit of work, but there’s a solid game developing here. It’s gory and visceral, invoking the same sort of off-the-wall violence seen in titles like Broforce, but it has so many other ideas and mechanics that it takes on an identity all its own. There’s a blast to be had right now, and it has whetted my appetite enough that I’m keen to see the finished product, with all the tropes and gameplay refined, because it’s sure to be something special.

If you enjoy violent, 2D action, roguelikes, and comic aesthetics, then you need to check out the game’s official Steam page and prepare to be the best badass you can be.