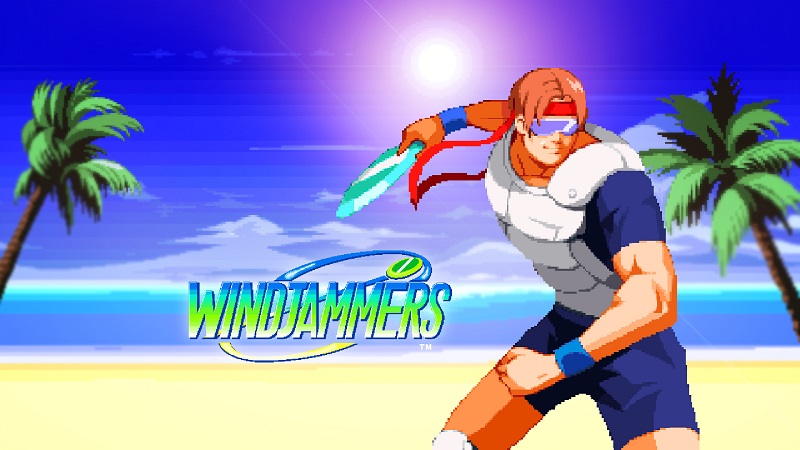 A person who always seems to be at the arcade when you are, and all the times you aren’t. Usually has a glazed look on his/her face.

The definition above was taken from the Urban Dictionary and perfectly describes 90’s me. I practically lived at the arcade at our local mall in the (then) quiet town of Spartanburg, South Carolina. I’ve seen arcade cabinets come and I’ve seen them go. I was there on the glorious day that Mortal Kombat II rolled through the arcade’s main entrance, and I was there the day that it was shimmied to the back corner to make room for Mortal Kombat III. This magnificent land of joy is the place where I brought my girlfriend to on our very first (and last) date, and it was here that my digital initials could be gazed upon by all the plebs who tried to take me down. That arcade is a Claire’s now.

Ok, so maybe my initials weren’t on every single machine in that arcade, but I know it was on at least two of them! Who cares about high scores anyway?! So, as I was saying, Mortal Kombat III was rolled in and obviously everyone in our town decided to bring their rolls of quarters to the mall and give it a go, including me.  That weekend I had my ass handed to me more times than I can count. Mortal Kombat III just wasn’t for me, so I did what most gamers would do in this situation.  No, this isn’t the time for a sports montage of me practicing until I learned every combo and fatality and beat everyone in my town. This is a time of sadness!  This is the time that I Charlie Brown walked my ass to the back of the arcade to gaze upon my initials on the Mortal Kombat II machine. 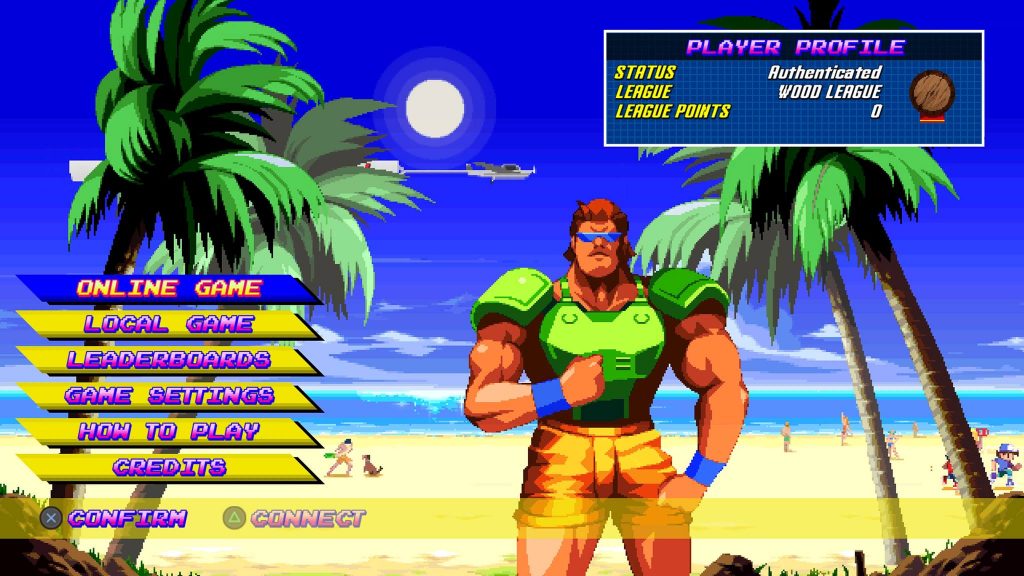 Windjammers in 2017! I would have never thought!

My weakest hour wasn’t too bad though! Now that the Mortal Kombat II machine was tucked away in the corner, it just so happened to be next to a Big Red. Yep, that iconic Neo Geo cabinet that always seemed to have the volume cranked up the the max! Our Big Red mostly had fighting games in it, which I was currently trying to distance from due to my Mortal Kombat III disappointment. What it did have though, was Windjammers!

Let’s Get Ready to Rumble 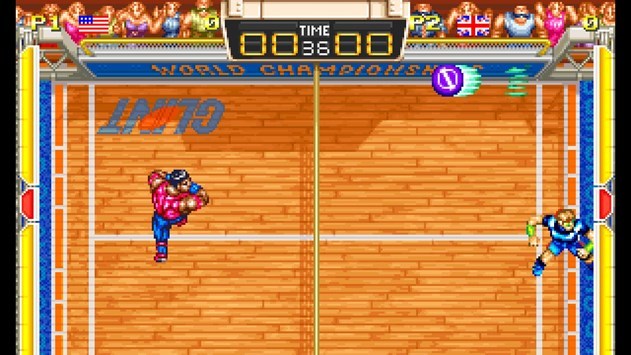 I wish my high school had a Windjammers team.

For those who don’t know what Windjammers is, let me explain. Think of the most badass, pulse-pounding, sweat-inducing game of Pong that you’ve ever played. You’ve never sweated playing Pong? Well, you’re about to! In Windjammers, boring pong paddles are replaced with six of the coolest looking guys/gals you can think of (One of them looks just like my dad! – ed), and the ball is now a Frisbee. The objective is simple – get the Frisbee behind your opponent and into their goal. Some areas of the goal will award more points than others, and the first player to get to 12 points, wins. The rules are simple, making Windjammers the perfect game for quick pick up and play sessions.

The six larger-than-life characters are from different locations from around the world and each have different abilities. Stats come in the form of a simplistic meter with only two things to consider – speed and power. There is a good mix of power players and speed demons, and, of course, there are a few average players thrown in for good measure. Each has their own personality as well, with Biaggi (the Italian), screaming “Bravo” after a match, and Miller (UK) calling out “Good Show” to the loser. Every character screams 90’s, with their neo spandex unitards and cool Brett Hart sunglasses. I mean, come on! Who didn’t want a pair of those things in the 90’s?!

This Ain’t Your Grandfathers Pong 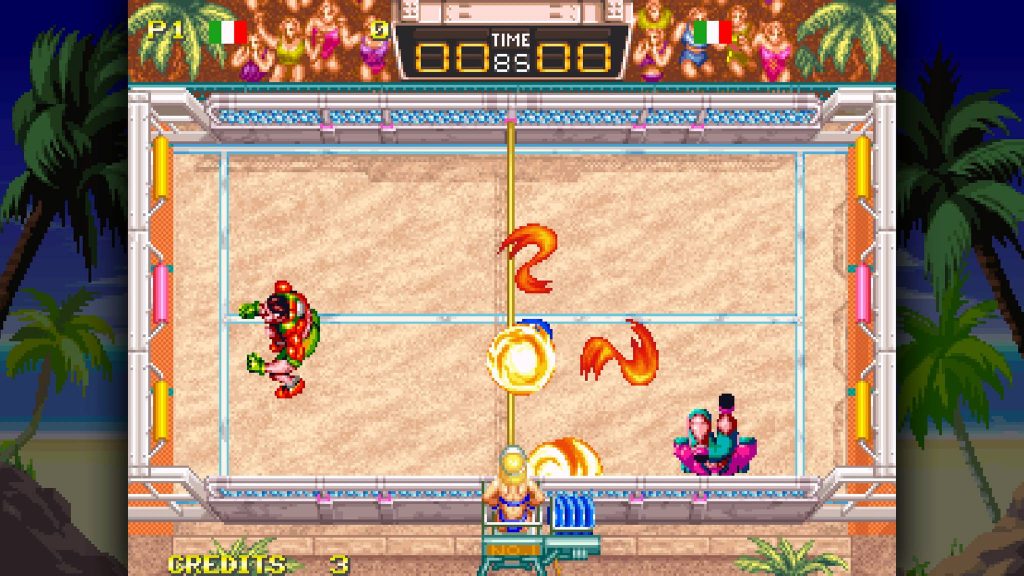 Some matches can get a bit crazy.

Other than catching a Frisbee and throwing it, players can also knock the frisbee up in the air and perform a super throw. These throws are spectacular and similar to throws one might see in the NES title Super Dodgeball. Super throws are extremely hard to defend against, but players with perfect timing can catch them and throw them back immediately for a counter super throw. Normal throws, although not as tricky as super throws, can be difficult to manage due to the play-field’s walls acting as rubber bands. Similar to pong, the frisbee will bounce off sidewalls and players must determine the trajectory to decide where to stand or what part of the goal to defend. Certain play-fields will have mini-walls in the middle of the court too, that way every game doesn’t feel exactly the same. Like any good arcade game, Windjammers is easy to learn but hard to master.

Playing the computer AI is fun, but Windjammers is best when played against a friend or human opponent. This is where the PS4/Vita versions shine. Playing online is simple and fun, but does have some caveats.  Some matches play perfectly but others are bogged down by horrid lag. This is a game of perfect timing and as many of you know, lag makes timing impossible.  I was able to play over 100 matches online, many against the same random opponent, and about 10% of them resulted in a laggy experience.  Not bad, but not perfect.  It’s hard to say if my laggy online experience was due to net code, but I can say that playing the same opponent resulted in different results. It should also be noted that both of us had our PS4’s on LAN connections. 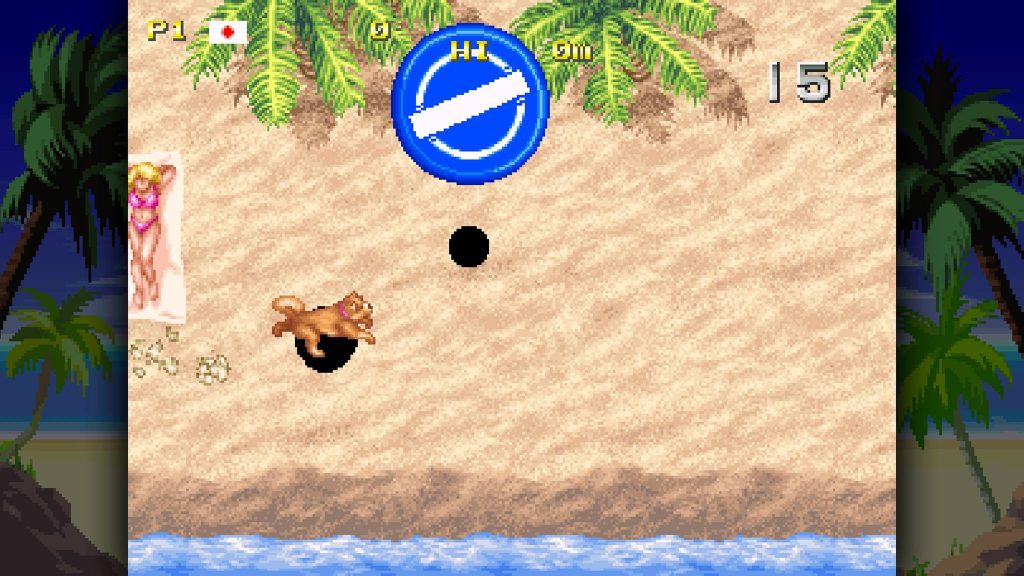 Other than the Windjammers, there is some new content in this package that comes in the form of mini-games. Dog Distance tasks players with controlling a dog who must catch a Frisbee on a crowded beach, and  bowling is, well, bowling, but with a Frisbee. Neither game is amazing, but they are a fun distraction in between games against the AI. I don’t see many going out of their way to play these mini-games, but it’s nice knowing that they’re there. 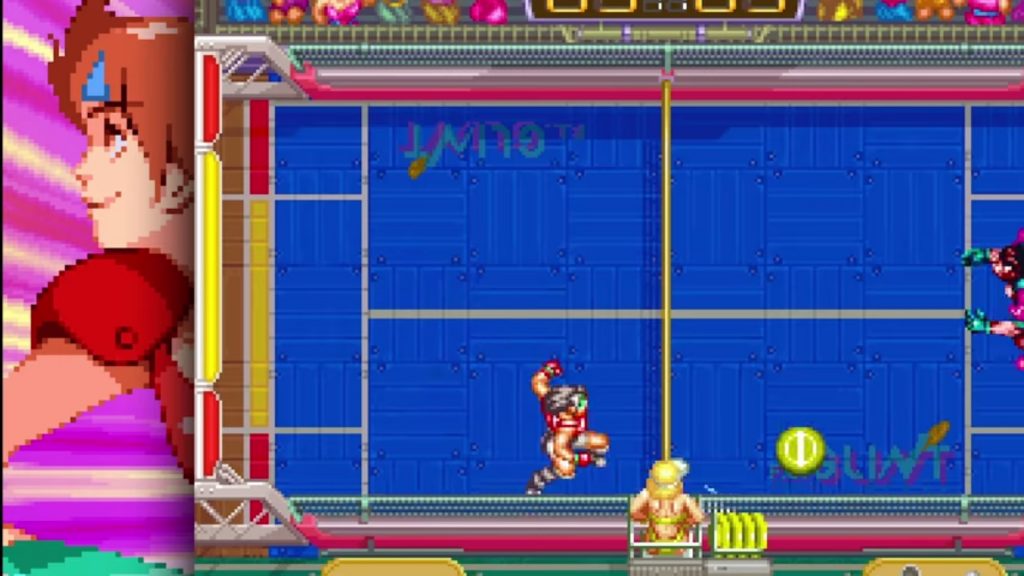 Put some power behind that throw!

Since this is a port of a 90’s arcade game, there are a few filters to play with to make it look as authentic as possible. Scanlines are there to give a classic old-school look and a CRT filter will make you feel as though you’re playing on an old tube television. There is also a smooth filter to clean up the image, but I consider this blasphemy (I’m an ornery retro gamer). For fans of neon and 90’s era wrestling, prepare your eyes for pure awesomness. Windjammers looks like a WWF event, and it’s glorious!

In conclusion, if you’re already a fan of Windjammers, I think you’re going to love what developer DotEmu has done.  Actually, other than online play and two mini-games, you might not even realize that you’re playing a port, which is a good thing in my opinion. I had a few laggy experiences playing online, but they were few and far between.  If you’re a parent, be sure to fire this up and hand your kid a controller. Before you know it, both of you will be smiling ear to ear.

Full disclosure: This review is based on a Playstation 4 review copy of Windjammers given to HeyPoorPlayer by the publisher.

Move over Odin, here’s Oddleif As a person who grew up in Minnesota, I should have a stronger connection to Vikings. I was never into football, nor do I…