Playing To A Captive Audience 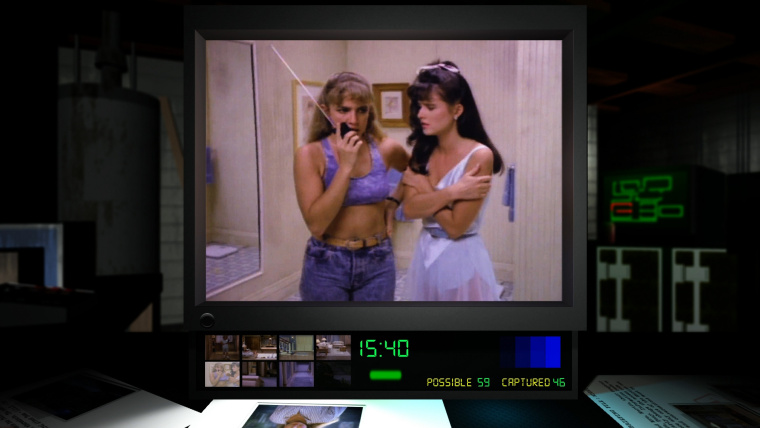 It’s hard to believe it’s been 25 years since Night Trap first released. While that name may not ring any bells for you millennials out there, Digital Pictures’ campy ode to the slasher flicks of the 1980’s caused quite a stir when it released in 1992. The game’s racy – at least at the time – depictions of poor coeds being murdered by bumbling, black-clad vampires was even enough to cause the United States Senate to hold hearings on video game violence.

Make no mistake about it, the on-screen shenanigans are undeniably tame by today’s standards. But in the austere 90’s, when good old American virtues runneth over like Aqua Net and high fructose corn syrup, Night Trap was seen as borderline pornography. The game became a favorite target of political opportunists like political activist Tipper Gore and Senator Joe Lieberman, who were set on convincing parents video games were murder simulators that would turn their malleable children into raging psychopaths. In the end, Night Trap earned the dubious honor of being responsible for the establishment of the ESRB along with similarly violent titles like Lethal Enforcers, Mortal Kombat, and Splatterhouse.

Yeah, the 1990’s could be a frustrating time to gamer, what with our favorite pastime under siege by hysterical politicians and the media. But we had Turtle Pies! So I guess things could have been worse, right? 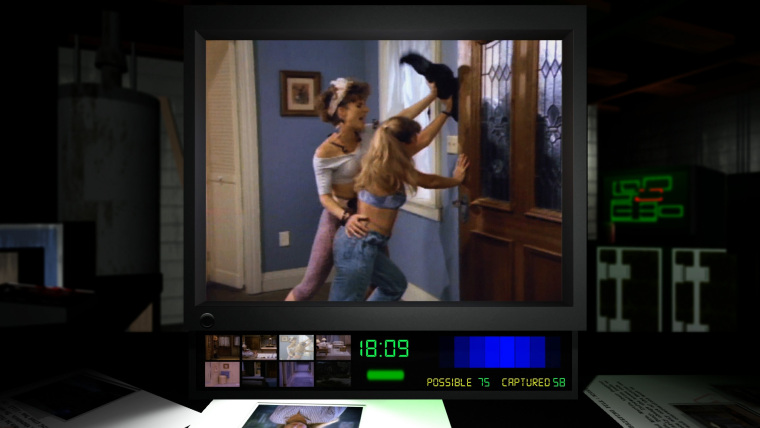 Now, a quarter century after shaping the industry as we know it, Night Trap is back in all of its grainy glory thanks to indie studio Screaming Villains, giving a new generation of players a chance to experience the game in all of its voyeuristic glory. More than a mere port, this 25th anniversary celebration offers an all-new game mode to test your ghoul-catching skills, cleaned up visuals, and plenty of bonus content for fans to unlock. However, the game’s once-controversial content isn’t enough to raise many eyebrows in this day and age, where copious blood, boobs, and brutality are par for the course. With little to offer in the way of shock and awe, is Night Trap: 25th Anniversary Edition still worth experiencing?

Well, that depends. Fans of the original game and low-budget horror titles will probably love what lies in store. The grainy full motion video footage of the original 1992 release is now crystal clear, allowing you to see each scantly-clad actress and blood-sucking baddie like never before. Another nice bonus is the inclusion of all of the different interfaces from the previous versions of the game. There’s also a new Survivor mode to pad things out a bit as well, which pits you against an endless assault of Augers and tasks you with trapping them until you’re ultimately overrun. It’s fun, though the recycled scenes do start to become a bit monotonous after awhile.

While the new modes and interface options are great, there’s a lot of juicy history packed into this package as well. One of the coolest features is the ability to play the original Night Trap prototype. Titled “Scene of the Crime”, this cool proof of concept allows you to get an early taste of what developer Digital Pictures envisioned for the title. And if you want to dive even further into the making of the game, you can even unlock an interview with the game’s director and co-creator Jim Riley. Simply put, if you’re a fan of Night Trap, there’s a treasure trove of campy content for you to savor in this remaster.

Finally, I can’t stress enough how much easier the 25th Anniversary Edition’s native interface makes things for the player by having the formerly static camera grid now display scenes in real-time. Considering how many players had to keep detailed timetables of when certain Martin family members and augers appeared in different rooms through the ancient tools of pen and paper back in the day, the impact this has on the flow of the game can’t be overstated. It’s a smart change, as it means you’ll spend much less time simply guessing where Augers will appear and more time trapping the undead buggers.

House Of A Thousand Corsets 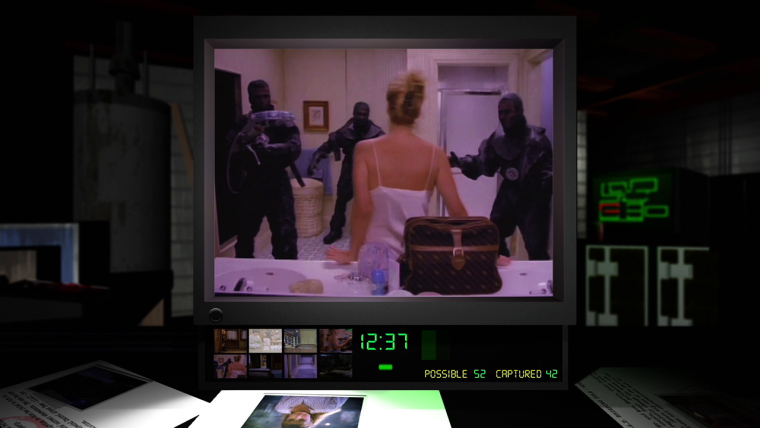 As a huge fan of the original game, I love what Screaming Villains have managed to do here. Still, there are some very real issues ingrained in Night Trap’s pixellated DNA. For starters, triggering traps can only be done when you use the correct corresponding color code. The problem is the code changes numerous times in the story. Considering the fact Augers flood the house constantly, it’s easy to miss a conversation saying which color the trap code has been changed to. This can be maddening. Nothing’s worse than having great run come to a grinding halt just because you missed a five-second cutscene.  And there’s no checkpoints to be had here, either. Once you fail to capture a certain percentage of Augers then sorry, pal. It’s game over. However, considering you can wrap up the game in about a half an hour, this is honestly for the better.

The need to shift from camera to camera constantly also makes the story almost unintelligible at times. Then again, this does help encourage multiple playthroughs as it’s impossible to see everything the game has to offer in a single sitting. Still, it’s hard to imagine anyone but the most die-hard Night Trap fans coming back to finish the game time and time again to get the big picture.

Perhaps Night Trap’s biggest flaw is its complete lack of a tutorial. Had I not played the game on the SEGA CD many moons ago, I myself would have been clueless when it comes to springing traps and the game’s color code system. In fact, I had a reviewer from another publication message me for help because she was stumped on what to do. And I imagine many other players experiencing Night Trap for the first time will be praying to the Google Gods for a solution when they find their traps becoming useless. Still, as a product obviously geared towards fans of the original release, this isn’t a huge surprise. But it’s a shame no effort was made to make the game more accessible for newcomers.

More Fun Than You Can Shake A Senate Hearing At

As a longtime Night Trap fan, I really enjoyed what Screaming Villains has done to bring the game to the modern era. The streamlined camera interface is great, and Survivor Mode is an interesting and addicting take that adds some extra mileage to the package. And the bonus content, including the Scene of the Crime prototype, are the best kind of fan service.

Still, if you’re not a fan of FMV games, this one isn’t going to change your mind. And the same sloppy design choices that hurt the original release are still just as pronounced as ever. Despite its issues, Night Trap: 25th Anniversary Edition is a fun window into gaming’s awkward past. A time when blood and bare midriff were enough to turn an industry on its head like an Auger who’s been smacked in the face with a spring-powered wall trap.

Full disclosure: This review is based on a copy of Night Trap: 25th Anniversary Edition given to Hey Poor Player by the Publisher.