Uncharted: The Lost Legacy certainly has some massive shoes to fill. After all, Naughty Dog’s standalone spin-off title starring Chloe Frazer and Nadine Ross finds itself standing in the shadow of arguably one of the best games of this console generation, Uncharted 4: A Thief’s End. That said, it’s hard to imagine what Naughty Dog could do to make this bite-sized adventure stand on its own. Thankfully, the Santa Monica-based studio have proven they are more than up to the task. The game is a veritable summer blockbuster that’s full of explosive action, stunning locales, and, perhaps more than anything else, heart. It’s a pulse-pounding action extraordinaire that proves unequivocally that great things do indeed come in small packages.

Considering the game’s relatively modest seven-hour length, it’s no surprise to report that Uncharted: The Lost Legacy’s story doesn’t quite offer all of the twists and turns you’d expect from a mainline entry in the series. However, what the game sacrifices in terms of narrative direction it makes up for with sublime action sequences, jaw-dropping vistas, and sky-high production values that belie the game’s $40 price tag. 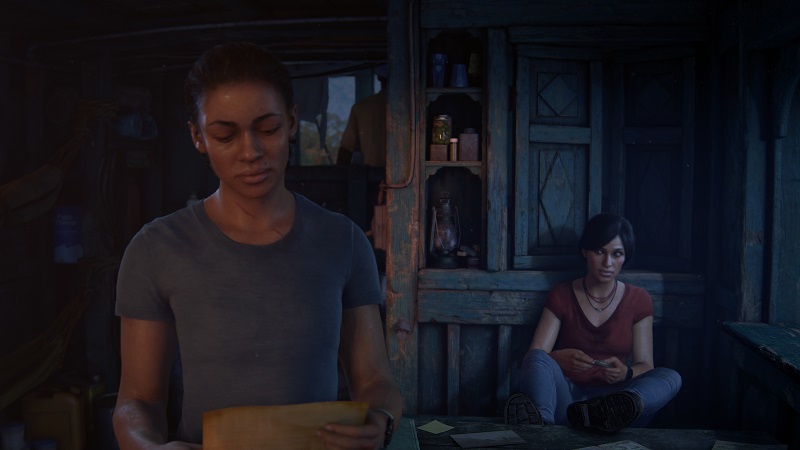 Naughty Dog’s decision to sideline Nathan Drake in favor of Chloe Frazer and Nadine Ross, two supporting characters from previous games in the series, as the leading ladies in Uncharted: The Lost Legacy proves to be a winning gamble. The story thrusts the master treasure hunter and former Shoreline mercenary leader into the heart of India during a violent insurrection as they attempt to uncover an ancient Hindu artifact, the Tusk of Ganesh. Of course, they aren’t the only two searching for the priceless relic. The two must race against the clock before a psychotic insurgent leader can get his clutches on the treasure to further his militaristic ambitions. While the story certainly brings with it a sense of Déjà vu, Naughty Dog’s masterful direction and a stellar voice cast manage to keep the otherwise predictable story exciting.

Chloe and Nadine may not share quite the same chummy chemistry of the Brothers Drake, but the duo’s more apprehensive relationship makes things more interesting. Chloe is impulsive, and her actions often lead to some hairy situations. Nadine’s lifetime of military service makes her a more rigid figure, less inclined to throw caution to the wind. The way these two fiercely independent characters’ wildly different personalities often put them at odds with one another make these interactions all the more memorable throughout the duration of the story. 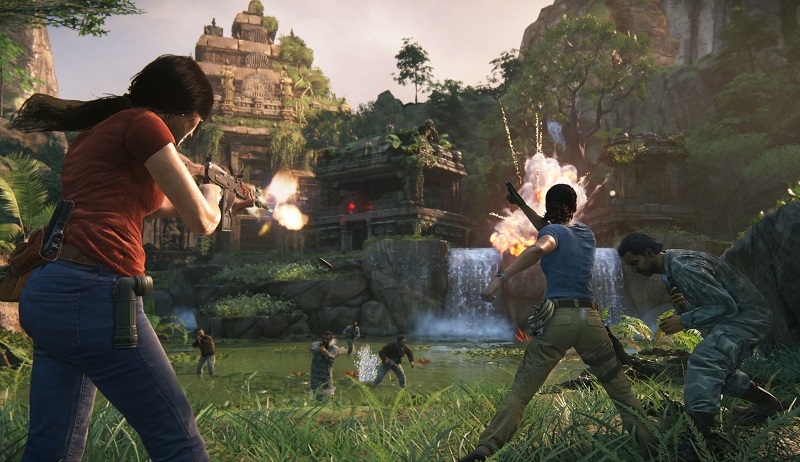 Like I said before, Uncharted: The Lost Legacy may be a smaller-scale affair than its predecessor. However, it’s one that makes every minute count. You’ll find far fewer monotonous crate-pushing puzzles or drawn-out treks down empty, ancient corridors to slow your progression. This more focused production allows you to savor the series’ juicier elements while ditching the fat and filler.

What’s left is nothing short of irresistible. Uncharted: The Lost Legacy is a feast for the senses. Chloe and Nadine’s trek through a war-ravaged vision of India packs all of the white-knuckle action series stalwarts could hope for. It’s an adventure filled to the brim with spectacular set piece moments and clever puzzles that will scratch your itchy trigger finger and hone your cerebral cortex while respecting your time.  Whether you’re clambering across speeding train cars while trading hot lead with a convoy of heavily-armed insurgents or scaling the limbs of a titanic Hindu deity in a long-forgotten city, you’ll find no shortage of unforgettable water cooler moments in Naughty Dog’s latest offering.

It should come as no surprise that the gunplay and platforming feel as polished as ever here. Naughty Dog has been refining the Uncharted formula for a solid decade, and The Lost Legacy is the pinnacle of that effort. Whether you’re leaping from cover to cover, diving from a speeding train onto a enemy Humvee, or scaling a sheer cliff face, getting Chloe to do what you want her to do is a seamless experience. Even moments where you’re not directly in control, like when you’re hurtling down a muddy ravine or being drug by a speeding truck, everything feels tight and responsive, allowing you to focus on the task at hand.

If Looks Could Kill 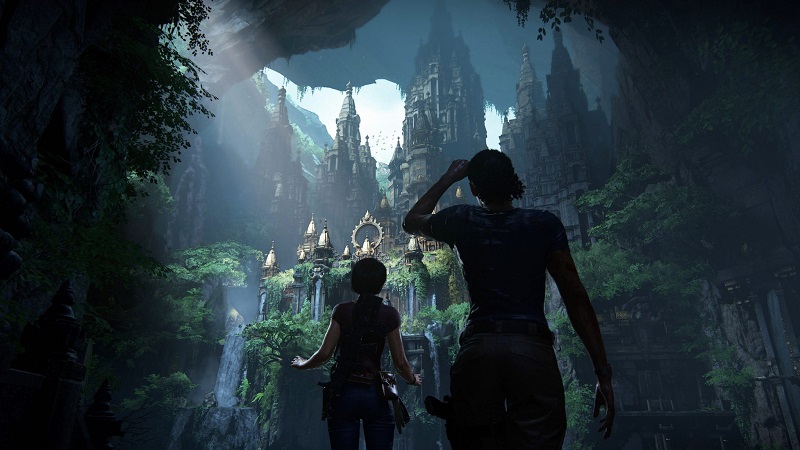 Few developers know how to tap into the PlayStation 4’s raw horsepower quite like Naughty Dog. And Uncharted: The Lost Legacy makes this abundantly clear, offering some of the most gorgeous vistas and detailed environments seen on the console. From the emerald green jungles of the Western Ghats to the bustling outdoor bazaars, everything is painstakingly detailed and full of little visual flourishes that make the world look alive. One area you’ll explore later in the game is filled with the bones of ancient soldiers. Almost every step you take results in femurs, skulls, and shattered weapons shifting at your feet. This sea of broken bodies and jagged weapons is so convincing that it’ll leave you wanting a hot shower and a tetanus shot. How’s that for a glowing endorsement?

Other touches, like the way your character’s hands will get cut and bloodied over time, and the realistic way the character’s hair and clothes become saturated after diving in the water, make Uncharted: The Lost Legacy the perfect showpiece for your new 4K TV when played on the PlayStation 4 Pro.

I have to confess, I’ve never been the biggest fan of Uncharted’s multiplayer component. Still, I have to give credit where credit is due. Uncharted: The Lost Legacy does an impressive  job of enticing players to hop online and see what it’s all about. The game features all of the previously-released DLC while adding a new Survival Arena mode. This new game type is essentially a horde mode where the weapons, enemies, and objectives change with every wave. It’s an exhilarating mode that will keep you on your toes. And while it likely won’t replace your multiplayer shooter of choice, it’s great fun when played cooperatively with a friend, and arguably the series’ most addicting multiplayer mode to date.

The Furthest Thing From Fool’s Gold

While I can’t recommend Uncharted: The Lost Legacy enough, the game’s brief campaign – we’re talking 10 hours if you want to uncover all of the hidden goodies – can make the game’s $40 price tag seem a little steep. However, if money is no object, you’ll find a game which, while short, delivers unrivaled production values, an engrossing world, and some of the most satisfying gameplay around.

Uncharted 4: The Lost Legacy is not only one of the best spin-off titles I’ve played in ages, it’s a remarkable example of just how far video games have evolved as a medium over the years that demands your attention.

Full disclosure: This review is based on a retail copy of Uncharted: The Lost Legacy purchased by Hey Poor Player