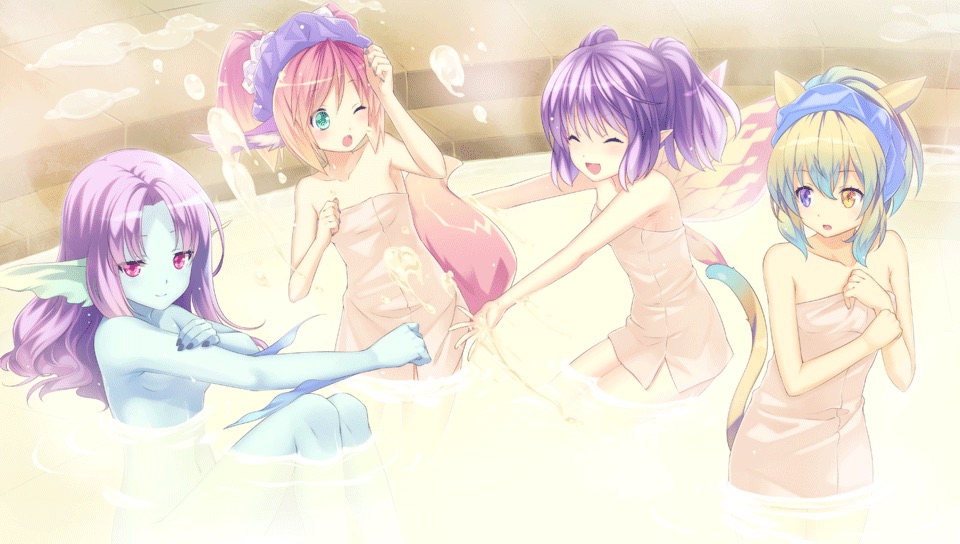 “Moe” is a sort of fetishistic type of cuteness in the parlance of anime fandom. Moero Chronicle is aptly named as it catalogues the full scope of fetishes into a vast RPG party of all-female characters. Each character in your party has two “moe traits”. These run the gamut from “Nice butt” and “clumsy” all the way to “tiny tits” and “Animal Ears” (my mother would be so proud of me for doing this games journalism thing). Everything from the core gameplay to the character design is openly focused on this fetishizing of feminine traits. It’s this wide open admission to being so focused on the titular “Moe” that makes Moero Chronicle unique, even as it highlights the lack of fun in actually playing the gosh-darned game.

Moero Chronicle is about a typically hapless harem anime protagonist named Io who lives in a world where Monster Girls and humans exist harmoniously until one day, a mysterious “Legendary Monster Girl” ensorcells her monstrous sisters to start hating humans! The cowardly, good-for-nothing Io is conscripted into sallying forth to defeat this mind-warping evil, prompted along by his long-suffering childhood friend Lillia.

In their adventures, Io and Lilia encounter Otton, a bulbous-headed walrus-like creature with a disturbingly phallic appearance and the attitude to match. Otton is on a epic quest to accumulate as many used panties as he can, and his comically perverted nature is contrasted amusingly with his stoic, manly voice. The three of them go off on an epic quest across a series of inexplicably themed dungeons, from a mushroom forest to a Willy Wonka-esque candyland in their quest to find the mythical Legendary Monster Girl. If you’re looking for a JRPG epic with a densely layered story, sprinkled with a liberal helping of philosophical insight, check out Xenosaga. Moero Chronicle’s pleasingly comical plot is as light and fluffy as cotton candy (with a similar colour scheme for the attire of its female characters). 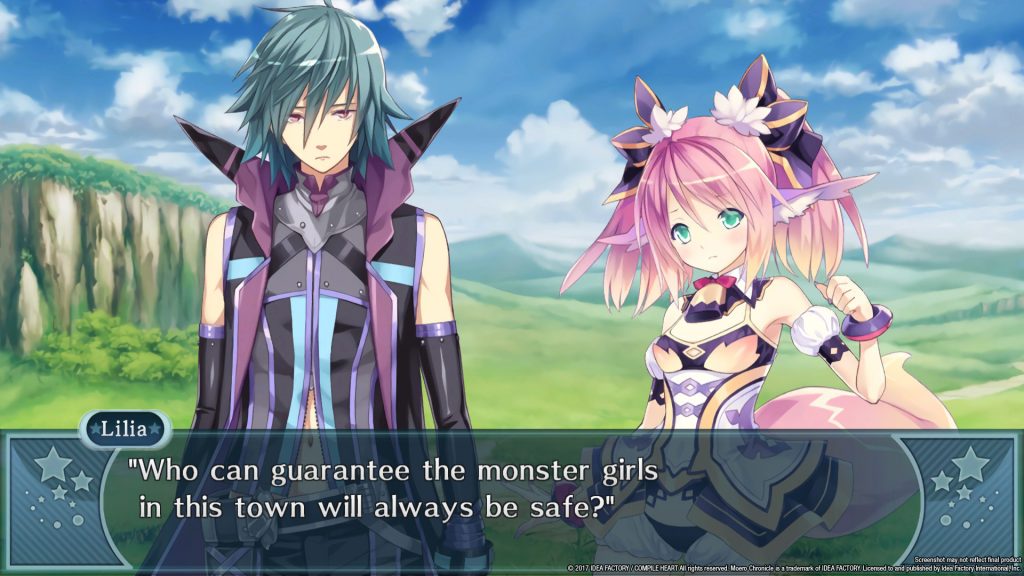 Who indeed? Moero Chronicle is fully of lushly colorful visual novel segments to break up the dungeon-crawling.

Moero Chronicle’s most fundamental problem is that it’s a turn-based dungeon crawler, and it takes truly masterful designers – like Atlus with the Persona series – to make random-battle-laden corridors halfway interesting. That’s especially true if these random battles can occur literally every step you take. Moero Chronicle has a couple unique systems to add some spice to this three decade old recipe. Each of your girls has two “moe traits”. Having a combination of various traits in the party will make Otton’s “fury” rise and bestow various bonuses during combat. For example, having multiple girls with animal ears in the party will apparently heighten Otton’s bestial nature, as it endows an attack bonus to the assembled battlers.

On top of pleasing the desires of a certain freakish walrus-creature, Io’s own barely-disguised lusts are a core part of the game. Between every combat round, Io has a chance to “charge” or “release” his “love” upon one of the characters to give them a boost to their next action. (Bloody hell, describing this game is making me wear out my quotation mark key). If his desire metre gets charged too highly though, his desire releases prematurely! This means you’re unable to use items or charge/release any further while Io goes through his “calm down” time. 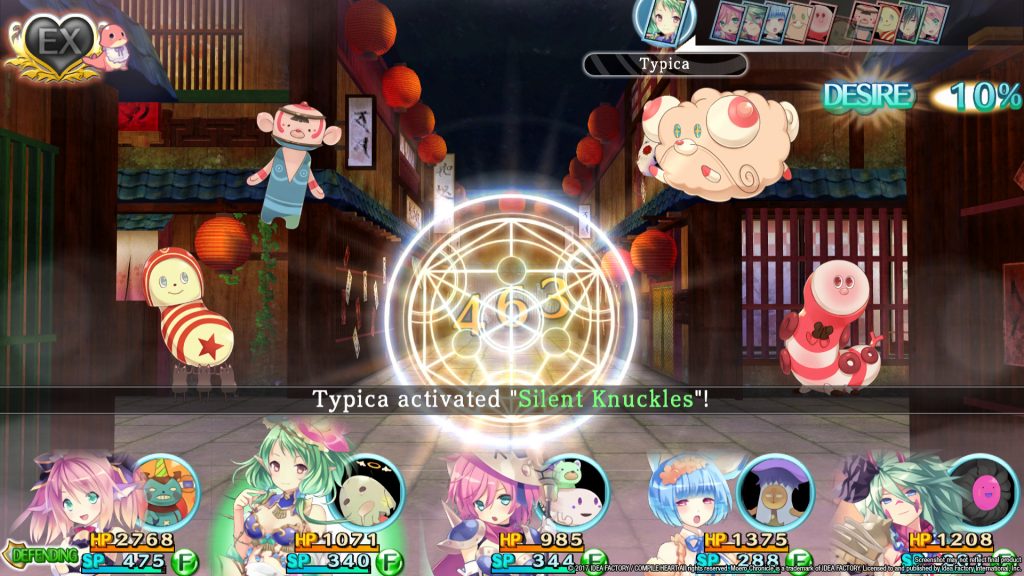 Still, I never encountered one situation where successful management of Io’s youthful libido proved pivotal to the combats. Since battles are really just grinding wars of attrition – wearing down endless health bars – there’s no impetus to save Io’s desire meter for crucial moments when your opponents are exposed. You just charge and release in a rote, standard way, occasionally using an item when things are getting too stale – a bit like a loveless marriage. It’s just yet another bar to keep track of in addition to the standard health/mana watch RPGers are used to. Oftentimes I just forgot about the mechanic entirely.

A couple of minor innovations certainly aren’t enough to stop Moero’s random battles becoming very repetitive. It’s halfway amusing the first time you encounter a bannana with boobs or a chibified moustachioed, loincloth-clad muscle man. However, it gets pretty tiresome when you see these enemies being lazily reskinned (this time it’s a brown-skinned bananna with boobs!) after you’ve been fighting the same iterations for hours. There isn’t even any animation on the endless waves of monsters you fight. Like your party members, they’re just static images that bob around a bit to indicate they’re taking their action. 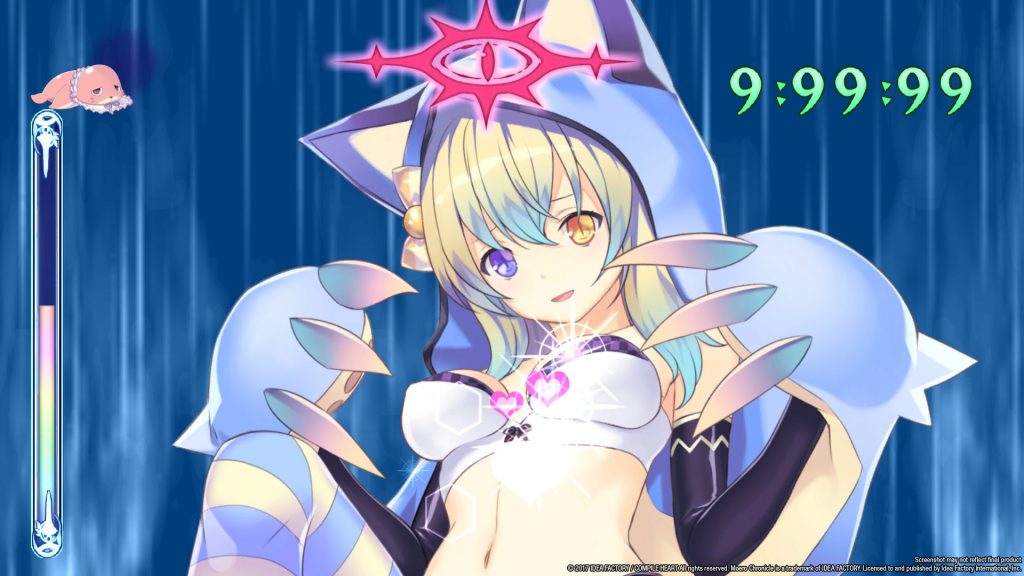 She seems happy to get tickled and poked even as Otton seems to flag.

As if to admit that selecting “attack” on random monsters over and over again isn’t profoundly entertaining, you’re offered the option to fast-forward through battles, where your monstrous ladies will just attack continuously until the battle is over. Before long, you’ll be fast-forwarding through most of these battles, with your only manual input being to periodically top up your parties’ health and mana with items you find. Things get a bit more challenging in boss battles but I can’t say I ever had to devise a strategy more complex than “attack and heal continuously” to gain victory.

Speaking of boss battles, gaining companions for your party of five is done through finding them wandering around in dungeons. Usually you’ll be confronted by a monster girl who’s adversarial towards you, courtesy of the evil ensorcelled eye above their heads. To gain a chance at persuading them of the errors of their ways, you’ll need to destroy their clothing. This is no easy task as every top, skirt or pair of stockings boss monsters wear can survive as many as ten fireballs each!

Having stripped your boss monster down, you’ll be launched into a “rub-down” minigame. This mini-game is basically a carbon copy of the one found in Monster Monpiece. You’re presented a CG image of the offending monster-girl and tasked with clicking over her body to find her sensitive areas. If you can hit multiple sensitive spots on quick succession, Otton’s desire will explode, activating “nude mode” where the girl’s underwear will disappear to be replace by some strategically positioned hearts. You’ll then have to pump the mouse up and down in rapid succession till Otton’s bulbous head sags down in exhaustion (poor thing!) Once you’ve poked, prodded and tickled their most sensitive areas, the monstrous lady will somehow be convinced you’re a thoroughly reasonable sort of chap and agree to join your party. 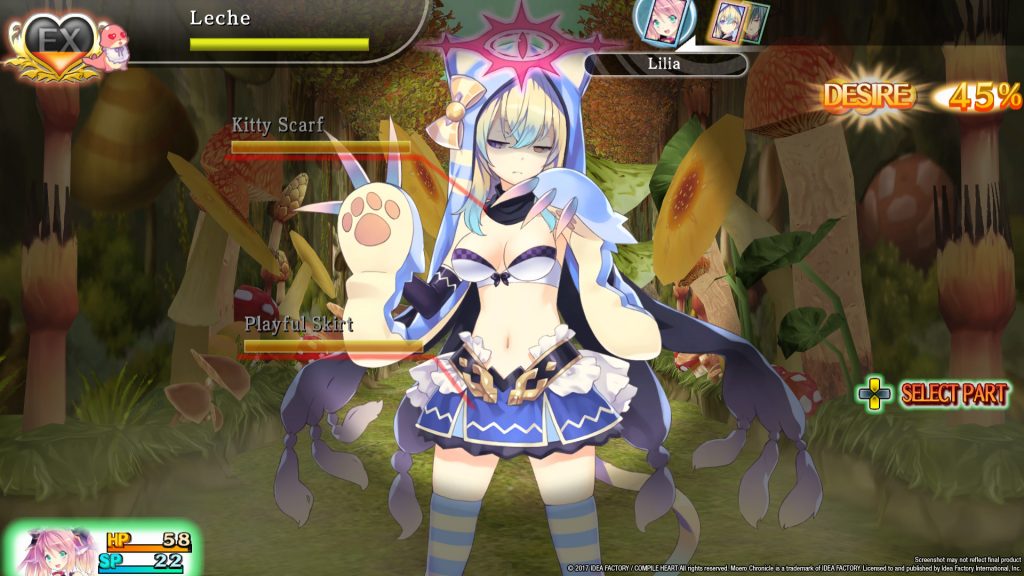 …but before you can start your caressing you’ll need to destroy the cumbersome clothing first! It’s… to… er… snap her out of her trance! Can’t you see that glowing eye thing?!

This rubdown minigame is just as much a rather lacklustre grope-em-up as it was in Monster Monpiece. It makes me question IFI’s failure to raise their game when so many better groping simulators like Galgun are on the market – not that I would know any, mind you!

Once you’re out of one of the various dungeons, you can go back to the inn at town. This inn has a pretty impressive occupancy as you can collect up to 50 monster girls to live there with you. Here you can periodically have a chat with one of the girls, which will usually take the form them exhibiting one of their archetypal personality groups. The thunder girls will berate Io; the girlish wolf-girl will adorably pout that she can’t sleep in his room while he blushes and stutters; the sexy onee-san types will tease him about his pathological fear of his own sexuality that so many anime protagonists seem to have. If the characterisation in Moero Chronicle sounds pretty threadbare and cliche-ridden, it’s because it is. It really really is.

You can also enhance your ladies’ intimacy level by spending “rub points” on providing them supplementary rub-downs or give them gifts (oddly enough they seem to enjoy being gifted random panties you’ve found in a dungeon). They can also be given pets found in dungeons to give them statistical bonuses and a chance at inflicting random damage to opponents. Is this extra aspect of character building that enjoyable? Well, no. It’s just another part of the endless dungeon-crawly (bump and) grind to get more items and money to spend on stuff that makes yet more stat bars go up. Given there’s as many of 50 monster girls to pamper, and you can only have 5 of them in your party at any one time, you’ll have to upgrade their rooms if you want them to level up properly outside of dungeoneering. It creates a huge amount of busywork if you want to keep them all up to scratch. Having 50 girlfriends sounds great until you get into the actual practicalities of it!

Moero Chronicle is a thoroughly reductive dungeon crawler wrapped up in a technicolour dreamcoat of harem anime gimmickry. After playing the game, my question is just… why? When IFI are capable of creating a far more compelling title like Monster Monpiece – which combines fanservice with a more interesting and unique card battler – why are we forced to trawl through endless dungeons for a glance at anime mammories (animammories?) Any innovations in combining traits or pampering your ladies to optimize their stats doesn’t change how boring the battles are. When you’re openly encouraged to fast-forward through the bulk of Moero Chronicle’s gameplay, that’s a sign it’s not very interesting. All the moe trappings in the world can only compensate so much for the tedium of fighting big-boobed bananna girls for the hundredth time. 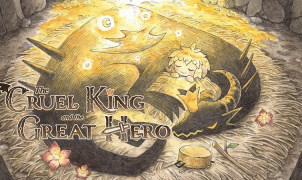