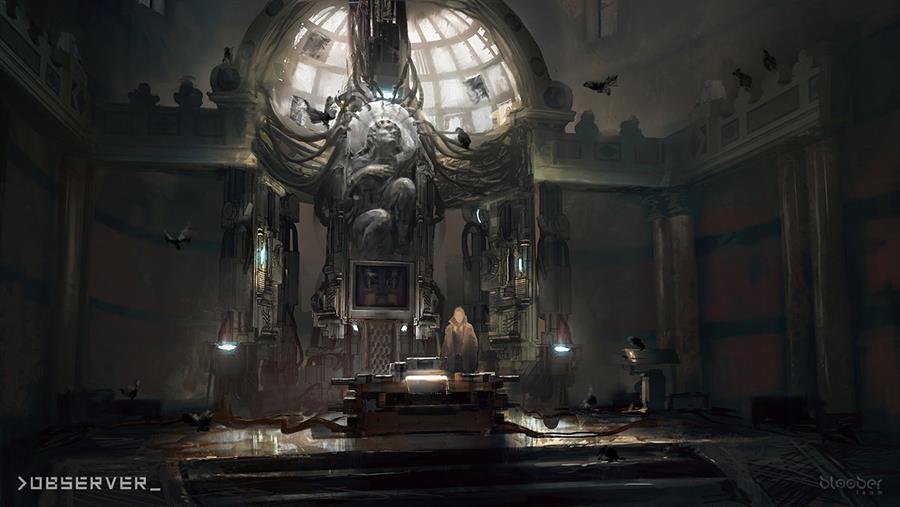 Last year, Bloober Team released Layers of Fear, a psyche-shredding adventure that thrust players into the mind of an artist as he descended into madness. It just so happened to be one of the most enjoyable horror games I’d played in ages. The game’s story was dark and unsettling, the atmosphere was laid on thick, and the scares were so unpredictable that they made the game’s short but sweet experience an unforgettable one. Now, a year and a half since Layers of Fear’s debut, Bloober Team has returned to make players’ worst nightmares come true with Observer, a gritty cyberpunk tale that builds upon and refines the foundation of its predecessor to create something new, improved, and absolutely terrifying.

Observer’s story is set against the backdrop of Poland in the year 2084. After a digital plague ravages Krakow, a mega-corporation known as Chiron swoops in to pick up the pieces, casting a long shadow over the crumbling Polish city and its denizens that live under constant scrutiny from its corporate benefactors. Players assume the role of Daniel Lazarski, who’s masterfully brought to life by everyone’s favorite Nexus-6 Replicant, Rutger hauer. Lazarski is a Cracovian police detective who works as an Observer, a heavily augmented human who can jack into criminal’s neural implants and explore their minds to uncover the secrets hiding within. One day Daniel gets a mysterious transmission from someone claiming to be his estranged son. Without a second thought, Daniel sets off to a crumbling Krakow tenement to unravel the mystery surrounding his son’s past. 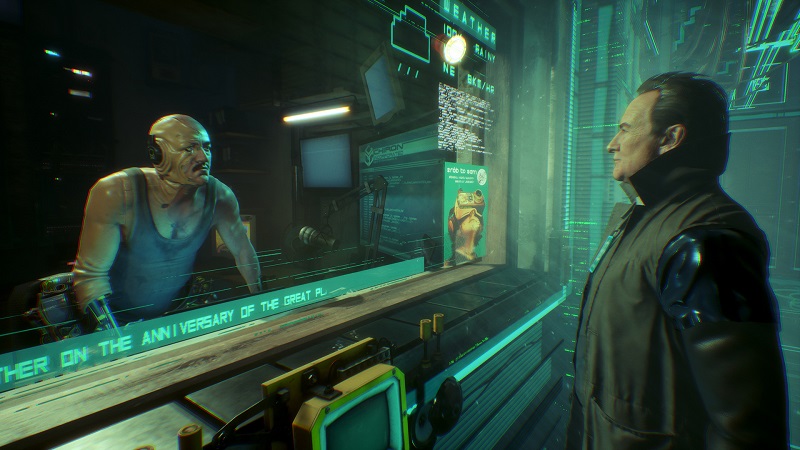 While Layers of Fear was a pure horror experience, Observer feels like the unholy fusion of Jacob’s Ladder and Blade Runner. Sure, the game features plenty of the same kind of jump scares and visual tricks that made Layers of Fear a horrifying hit. However, it’s not all bleeding walls and seizure-inducing fever dreams this time around (though there’s still plenty of that to be had, too). Don’t get me wrong, terror is still the main course in Bloober Team’s latest offering, but Observer also features plenty of sleuthing and puzzle solving. This is a detective story, after all.

As you explore the tenements in search of Daniel’s son, Adam, you’ll come across various grisly crime scenes that need to be investigated. It’s during these investigations that you’ll need to make use of an Observer’s special vision modes to piece together each crime scene to uncover what happened. Daniel has two visions modes;  Electromagnetic Vision, which scans for electronics, and Bio Vision, which allows Daniel to detect biological evidence. These allow you to investigate wounds or blood trails, uncover secret passages or hack computer terminals, and more.

These investigation scenes are never particularly difficult. However, they do make Observer feel like a much less passive experience than its predecessor and help it avoid the stigma of being a mere walking simulator. Though to be fair, the game is still a largely on-rails affair. 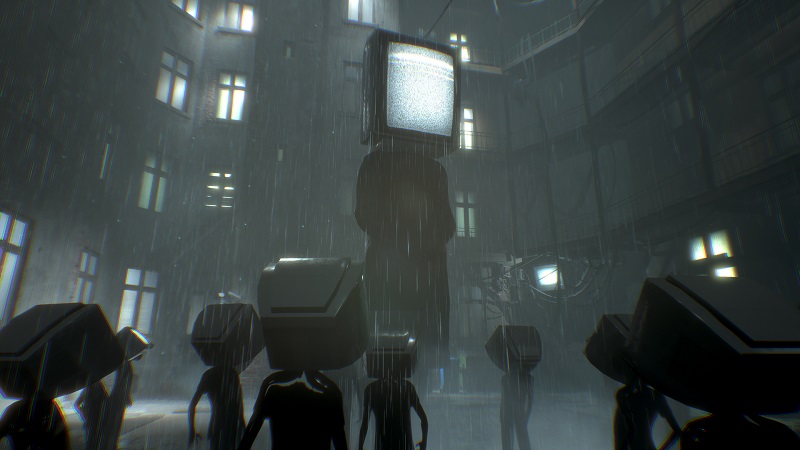 Cyberpunk sleuthing is all fine and well. However, Observer shines its brightest when Daniel dives into the minds of the game’s sordid cast of characters. It’s during these nightmarish treks into the crumbling psyches of Karkow’s denizens that you can really see just how far Bloober Team has come since Layers of Fear released. Each of these segments is unrelenting in their visceral intensity and pulsing, oppressive imagery. Take my word for it –  if you have epilepsy then you’re going to want to steer clear of Observer. Even without the constant barrage of spine-chilling imagery, the mature and often emotional themes these segments explore can feel absolutely suffocating. And you can consider that a compliment.

I’d love to elaborate on some of my favorite moments, but I’d hate to risk spoiling them for you. Let’s just say if you enjoyed Layers of Fear’s nightmare-inducing imagery and agonizing narrative, you’ll love what Observer has in store. 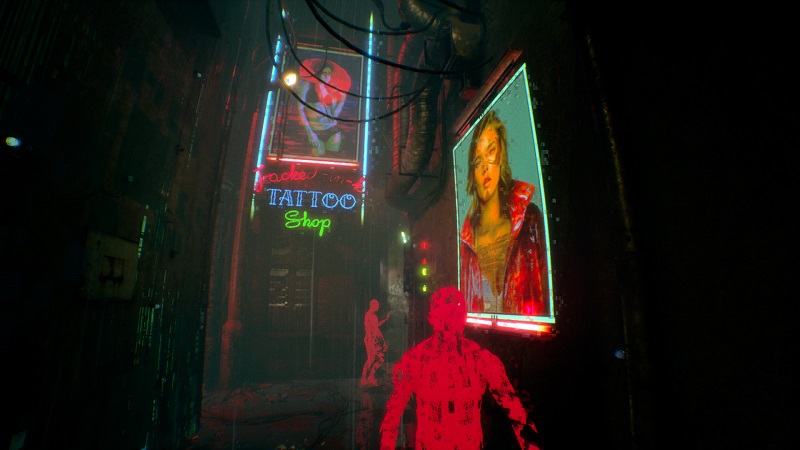 Observer is no slouch when it comes to its presentation. Bloober Team‘s dystopian vision of 2048 Krakow is a veritable feast for augmented eyes. Every locale, from the pulsing, neon-trimmed walls of the decrepit apartments and sterile, Chiron laboratory corridors of the real world to swaying forest and indescribable nightmare worlds that you’ll explore in the minds of those you meet, are all artistically striking and teeming with fine details that impress. The game runs great too. I reviewed Observer on a rig with an Nvidia Geforce GTX 1070 with 16GB of RAM with the settings on high at a resolution of 1920×1080 without any noticeable frame drops, even when the on-screen action was at its most intense.

As great as the visuals are, Observer’s audio direction is also top notch. From haunting ambient sounds to chilling effects meant to keep you on edge, the game gives you plenty of reasons to play with your head firmly ensconced in a quality pair of headphones. Rutger Hauer’s gruff, world-weary delivery never gets old, and fits troubled protagonist Daniel Lazarski’s character like a glove. And though the rest of the voice talent isn’t quite as solid as the man who brought Roy Batty to life in Ridley Scott’s 1982 cyberpunk classic, Blade Runner, they get the job done.

Ghosts in the Machine

When all is said and done, Observer is a real treat for fans of both the cyberpunk and horror genres that shows just how far Bloober Team has come in such a short period of time. They’ve really shown an uncanny knack for crafting a quality horror game, and I honestly can’t wait to see where they take the genre next. If there’s one real flaw with Observer it’s that the game is quite linear, which can make return playthroughs to experience both of the game’s endings a bit of a hard sell. Still, it’s one hell of a wild ride while it lasts. If you’re looking for a quality cyberpunk tale that lays the atmosphere on thick, look no further than Observer.

Full disclosure: This review is based on Steam copy of Observer provided by the publisher.