A Game That Exists 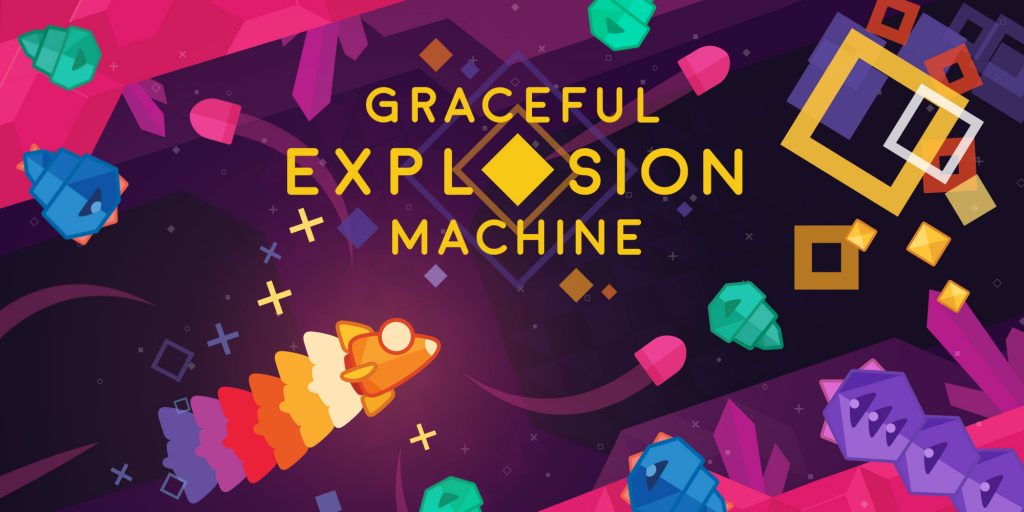 When we purchase a new game, it’s easy to want to expect a lot out of it. Something completely new, something that adds to the genre or even revolutionizes it completely; hell, maybe it even forges its own genre because it’s that good of a game. Unfortunately, when we set our sights that high, we should be prepared for disappointment, as not all games are created with this goal in mind; in fact, sometimes a game is just okay, or just enjoyable. And while it can be well-made and overall a working title, it just may not have the “oomph” or “pizzazz” that other games may have. I feel that this sums up Graceful Explosion Machine in a nutshell – a game that had good execution but didn’t bring much else to the table. A game that was done well, but simply “there”.

Graceful Explosion Machine was developed and published by Vertex Pop and can currently be found on Steam, the Nintendo Switch, and PS4 for about $13.00. The game is described as a “blisteringly intense side-scrolling arcade shooter” with a “hypnotic synthesizer-driven soundtrack” and “gorgeous visuals bursting with vibrant colours, and bold geometric design”. With dozens of levels and baddies to defeat, gamers will be entertained for hours on end. 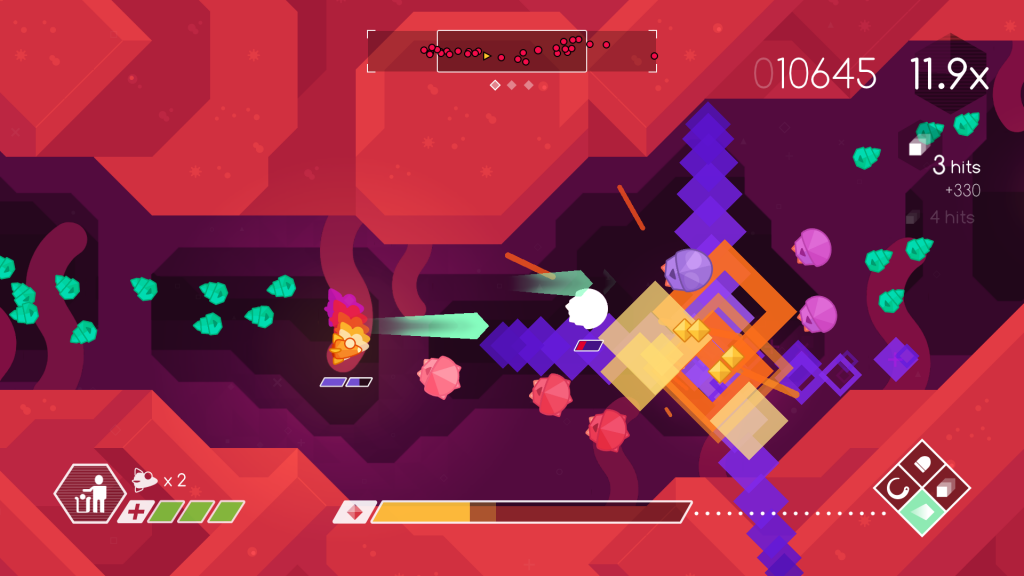 The controls are simple – thankfully, most developers don’t see a need to change up much when it comes to shmups. The feel of the controls are fluid – nothing sticks and everything is tight. A cool thing about Graceful Explosion Machine is that, unlike most titles in this genre, your ship (called the GEM Fighter) can change directions and travel back from whence you came, which is pretty neat and a different experience than others. The GEM Fighter also has four different types of weapons, which means you can destroy enemies in a variety of different ways, which is always nice.

The graphics are stylized in a nice, blocky-type feel. When you explode enemies into a zillion pieces, they’re in square shapes that were obviously designed this way and not from a developer’s inexperience. The colors are intense and pleasing to the eye, although the color scheme does seem a bit mismatched. The on-screen menus and the way necessary information is presented is clear and easy to understand. 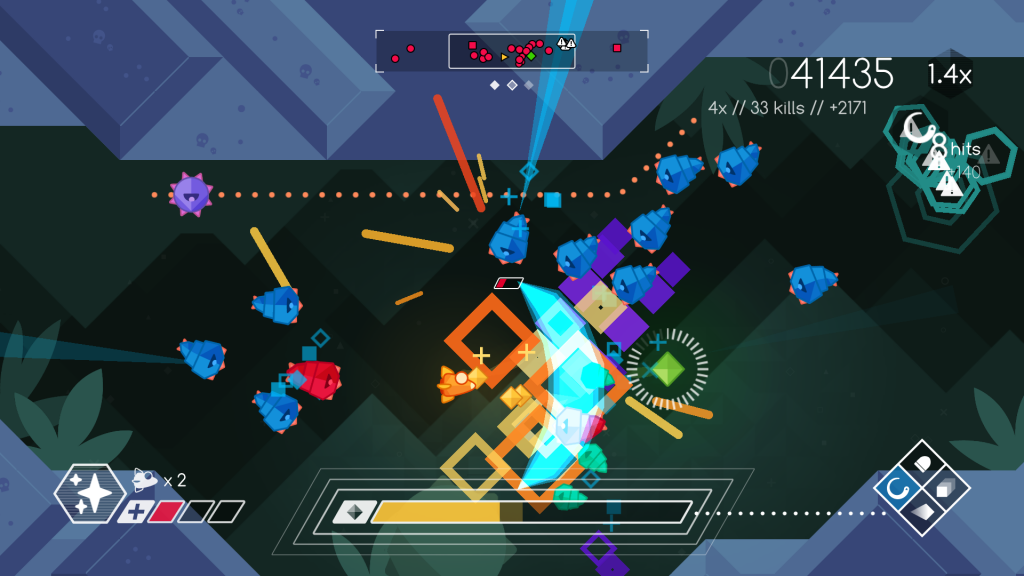 One area that definitely does not disappoint is the music. It’s catchy, it’s upbeat, and it’s perfectly suited for the title. It works really well with the graphics and feel of the game as a whole and enhances the overall play value. It’s just…cohesive.

When compared to other games in the genre in terms of difficulty, Graceful Explosion Machine will be one that newcomers might struggle with while veterans may find addicting. During my playthrough I found nothing that stood out to me as problematic or too tough; out of curiosity, I handed the controller to my husband and wanted to see how he might fare. As someone who doesn’t really play games from this genre, I thought he’d be a good person to test out my theory. As I watched him play, I noticed he was able to shoot enemies and beat bad guys just fine, but when it came time to understanding the flow of the level, he was at a loss. Progressing wasn’t intuitive, and he often just flew around in frustration, trying to will the level to end on its own. After some time he was able to figure it out, but the experience wasn’t as enjoyable for him as it was for me.

Graceful Explosion Machine has all the bells and whistles. It has the bright colors, the catchy music, and all the bad guys you could ever hope to defeat. Fans of the genre will find this title to be charming and worth the purchase, but those just dipping their toes into shmups may want to play another game to see if they like the genre first. It’s a solid title with great design and fun gameplay, but unless you love shmups, don’t expect to be playing this one long-term. It’s great at what it set out to do, but it didn’t revolutionize anything. It’s a game that exists – a well-made game that gets the job done.

Editor’s note: This review is based on a retail copy of Graceful Explosion Machine given to HeyPoorPlayer by the publisher.