Batman’s Story Has Never Been Crazier! 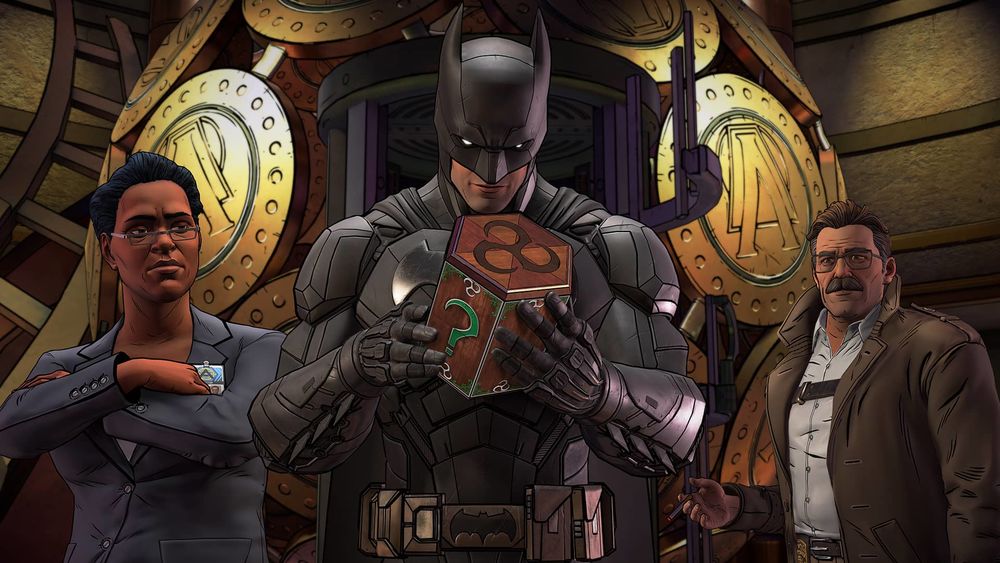 Batman’s origin has been told, retold, re-hashed, diced into pieces, and then told one more time. The First season of Telltale’s Batman series gave us hints of the classic origin, with some new twists that longtime fans never would have seen coming. Season 2 of this series of unfortunate events, titled Batman – The Enemy Within, is no different. Taking liberties with the property is what Telltale Games excels at the most. Now, if you have not played this game, let me start off with a humongous SPOILER warning for the first season and the first chapter of season 2.

Let’s begin with the story here. The Enemy Within starts off a year after the events of Season 1, with everyone dealing with the Lady Arkham aftermath. Right off the bat, we’re introduced to two major characters for this episode: The Riddler, our main villain for the episode, and Rumi Mori, a dirty businessman that is useful later on due to being both Riddler’s business partner and victim. The scene starts of in Mori’s casino, The Virago, showing just how ruthless Riddler is. He threatens Mori closely as an employee of the casino comes up behind him.

This is where we learn about Riddler’s classic question mark staff, which more resembles a scythe due to the blade in it. He slits the throat of the attendant and then locks Mori in a glass-cased trap that resembles one of the cryogenic chambers in Futurama. He has his hands attached to the door as a saw blade hovers over them. Riddler makes him answer some riddles in his classic fashion. Batman gets involved with the attack, but not before Mori loses two fingers and Riddler gets away. He left a puzzle box for Batman to solve.

Old Allies Return and New Ones Show Up 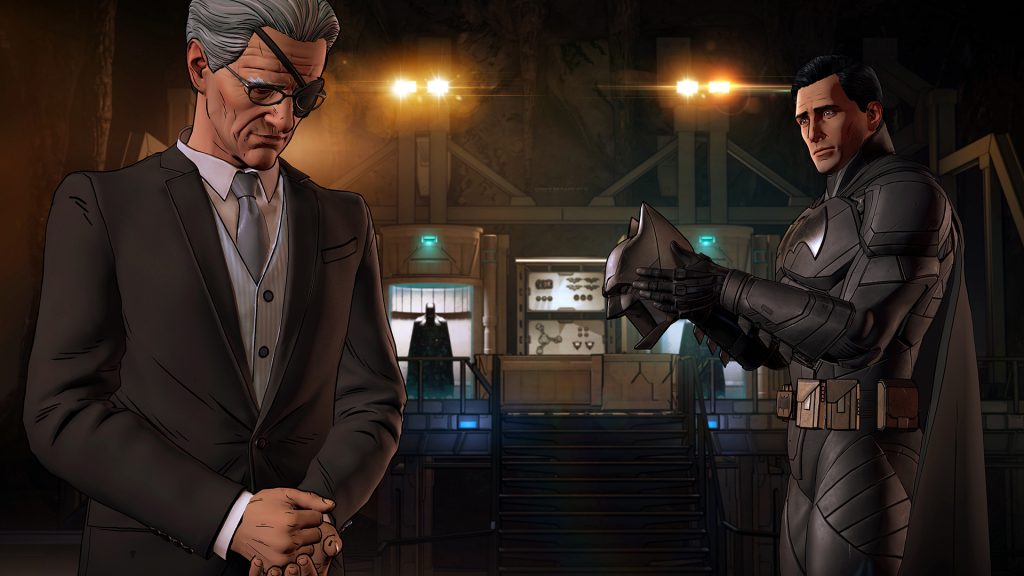 We’re, then, introduced to The Agency, led by Amanda Waller, a fierce woman that doesn ‘t like being told “No”. She resembles her pre-New 52 version here, which I can appreciate Telltale going back to old stories, models, and designs. The Agency, for those that don’t read comics, seems to be a stand in for Argus, a US-based federal agency that is generally led by Amanda Waller, complete with an A for the logo. You might recognize that name as the people that set up the Suicide Squad (Task Force X) in comics and films.

Amanda tries to get under Batman’s and Commissioner Gordon’s skins, taking over the investigation. The relevant agents to the story with her introduce themselves, starting with Agent Vernon Blake and the Agency Psychologist, Special Agent Iman Avesta, starts even trying to psychoanalyze Batman. Later on, they show up and accost Bruce Wayne in his office, explaining that he seems to always be directly connected to all the villains and insane people of the city. I wonder why.

Lucius Fox, Batman’s long time tech expert and one of his closest allies, plays a short role in this episode, due to the solving of the puzzle box that Riddler had given them. His daughter, Tiffany, is introduced as being smarter than even he, setting up for Bruce eventually wanting or not wanting to bring her into the fold, which he never gets the opportunity to decide in this episode. She gives Bruce a done she made early on that saves him a couple times. The puzzle box emits a frequency that Riddler has missiles tied to, which target Wayne Tower and kills Lucius in the explosion.

A Killer Story Clowns Around Some 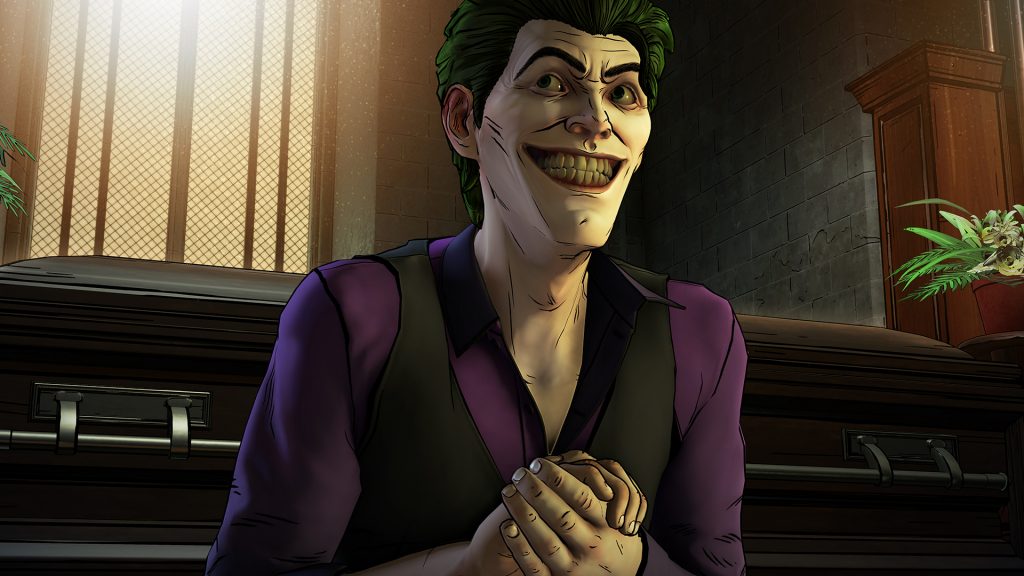 At the funeral, we’re reintroduced to Bruce’s Arkham Asylum buddy, known only as John Doe (i.e. Joker) in the series. After helping Bruce escape the asylum, John reminded Bruce that he owed him a favor. This lanky, pale skinned, green haired man seems to really have taken a liking to Bruce from their time together.

He comes to Lucius’ funeral and doesn’t seem to really know how to carry himself in such a traumatic time, because he wants to make everyone laugh, so Bruce has to pull him aside to talk. John gives Bruce a Get Well Soon card, to help with the sadness of losing a friend. It’s signed “John” where the O is a sad face and you get to choose whether you like it or not verbally to him. For the favor you “owe” him, he wants you to meet some friends he’s made on the outside called The Pact. You can agree or disagree to meet them, but he also wants to be helpful in Bruce’s search of Riddler as well. He does end of helping in the hunt, truth be told.

An Epic End To The Beginning 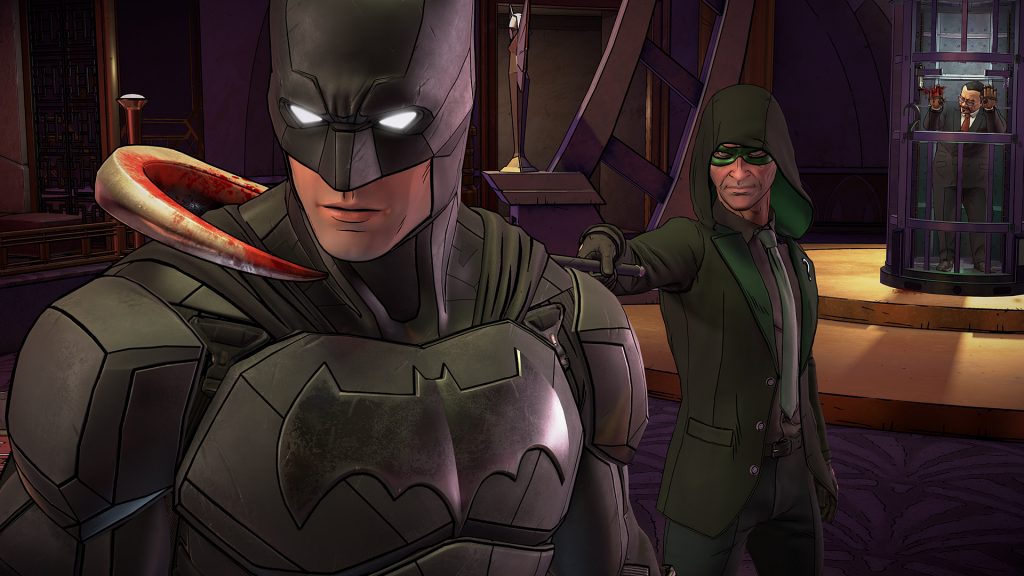 Riddler gets to play his game a couple more times between locking Batman and Gordon underground to solve riddles and the final showdown. Riddles use the “linking” feature that takes on a Detective mode of sorts for the Telltale version. Linking things together to show a string of events is very reminiscent of the Robert Downey Jr. Sherlock Holmes movies. Visualize the strategy and a series of events and then do it.

The story ends in Riddler’s death at the hands of a poison dart from the shadows. The Agency shows up and Amanda Waller begrudgingly (based on my own decisions) decides to work with Batman. After demoting Gordon from his position due to failing to capture the Riddler alive, she dismisses him and turns to Batman. She shows off what she knows about The Pact, including the name Dr. Harleen Quinzel (Harley Quinn). She also decides to out her knowledge of Batman’s identity in the final shot of the episode.

Holy Guano, Batman! There’s a ton of story set in this two to two-and-a-half hour episode and I’ve only touched on the key parts of it here. This universe is definitely focused on the duality of Bruce and Batman, allowing several of the choices and options through the game affect Bruce instead of Batman, where most games would have just focused on Batman beating up the bad guys.

A New Age For Batman Fans 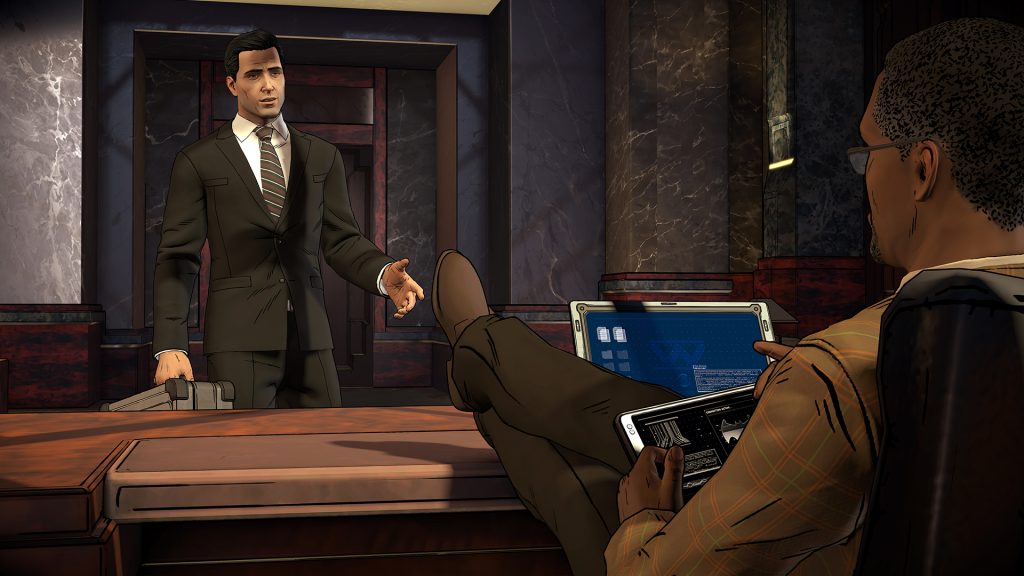 The character designs for this series uniquely portray each person and it never feels forced. Visually, they take on the cel-shaded Telltale aesthetic. Making Bruce Wayne is probably difficult in this style, because I can’t see him without wishing there was an Archer Telltale game.

Each character tells their own story in how they talk, act, and look. Bruce still has the chip in his ear from the events a year before. The game gives real emotion that most other mediums fail to express, between Alfred having PTSD from being kidnapped by Lady Arkham to the anger and pain that Tiffany feels towards Bruce when she finds out he is partially responsible for her father’s death. John Doe (Joker) is overly enthusiastic and eager to help. This makes players feel that the one real time Bruce doesn’t reciprocate this season, he’s likely to snap.

As with most Telltale Games stories, replay-ability is limited to decisions and choices players make. Allowing players to link from Season One’s play-through helps push the story forward without the need to muck about in making additional choices before the game. Little nuances and backstory are told in places like the Bat Cave, where players can look at Bruce’s “trophy” collection. Hints at what’s to come in the story can be found there, too.

Even The World’s Greatest Detective Has Flaws

One thing I feel was cheesy was how things tend to work out a little too well. One example is in the Bat Cave, when Bruce and Alfred are trying to figure out the puzzle box. Bruce figures out the riddle means the box turns into a vinyl record. It just so happens that the only music-playing-device in an extremely technologically fill room is a record player that you happened to use easier. This means that Bruce would have never figured out the riddle if he didn’t happen to have one readily at hand. It breaks the immersion of the story immediately. But, I guess we can’t have a scene where Bruce had to go to random thrift stores to see if they sell record players.

The hardcore Batman fans definitely should pick up The Enemy Within (as well as the first season). Aside from the occasional immersion kill, it’s a solid, unique story that will resonate with fans of the franchise and fans of story-based games. I definitely give the game a solid 4 out of 5 for storytelling alone.