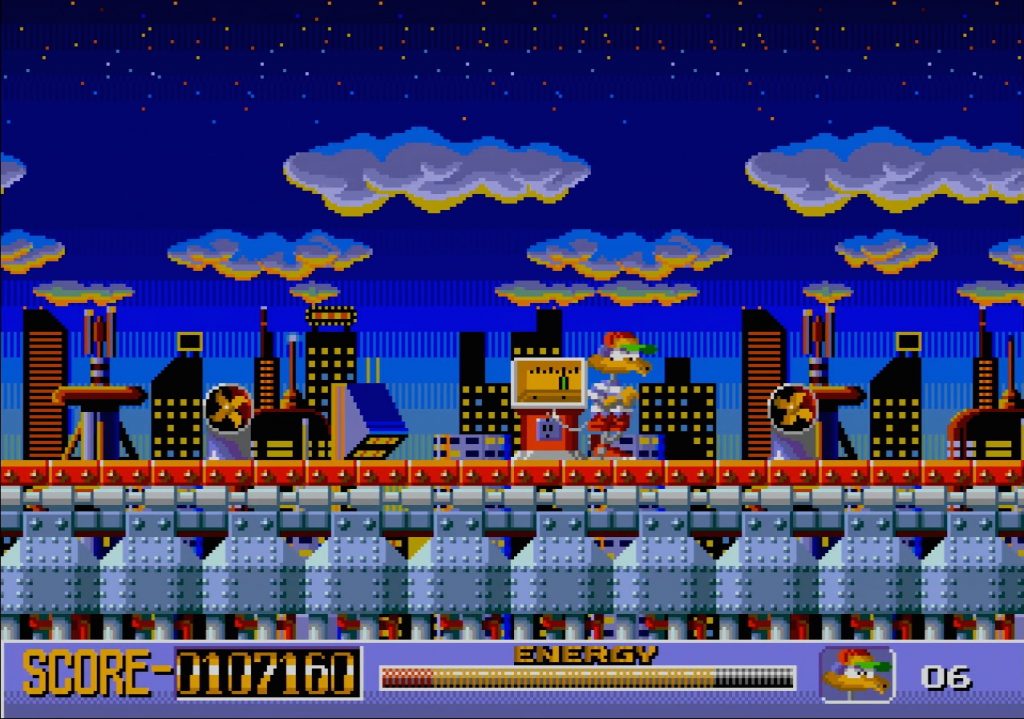 The year is 1993. Sega’s Sonic The Hedgehog 2 has been enjoyed by millions of gamers around the world and talk of a third installment is on the tip of every major gaming publication’s tongue. Genesis owners who’ve completed Sonic 2 are longingly staring at their shiny 16-Bit consoles, wondering what they should do with all of that unused “Blast Processing”. There’s a whole year to wait until the next Sonic game and a whole lotta gamers that are looking for another speed fix. Sure, we could just play Sonic 2 over and over again, but a year is a hell of a long time!

Realizing that there was a gap that needed to be filled, a company called Vic Tokai has decided to take advantage of this time between Sonic titles and create a mascot of their own. They needed a character that had that classic 90’s ‘tude and the ability to keep up with the blazing speed of Sonic. How about a Cheetah? They’re fast and always look like they’re pissed off. Nah, that’s too typical. Well, what about a coyote? They’re speedy and mean!  Nah, coyotes are rather boring…and look too much like dogs. OK, well, what about a duck? Toshi-san, you’re a genius!

Yep, Vic Tokai went with a duck. To be fair, a hedgehog’s top speed is 4 mph, so inserting a duck in place of a hedgehog isn’t too crazy if you really think about it. This ain’t no ordinary duck though. This is a cybernetic time traveling duck from the year 2902! All we need now is some ‘tude and we’re all set. Toss some slanted eyebrows and a pair of sneakers on that thing and I think we have ourselves a mascot!

Socket (known as Time Dominator 1st in Japan) puts players in control of a cybernetic duck named Socket, who’s been hired by The Time Warp Patrol to hunt down The Time Dominator, a dangerous criminal who is traveling through the past and stealing the world’s most valuable treasures. The Time Dominator’s recklessness has caused the flow of time to get all out of whack, and Socket must stop him before the flow gets so bad that the world comes to an end. Given a time traveling vehicle of his own, Socket must travel to the last know location of The Time Dominator and begin his search. 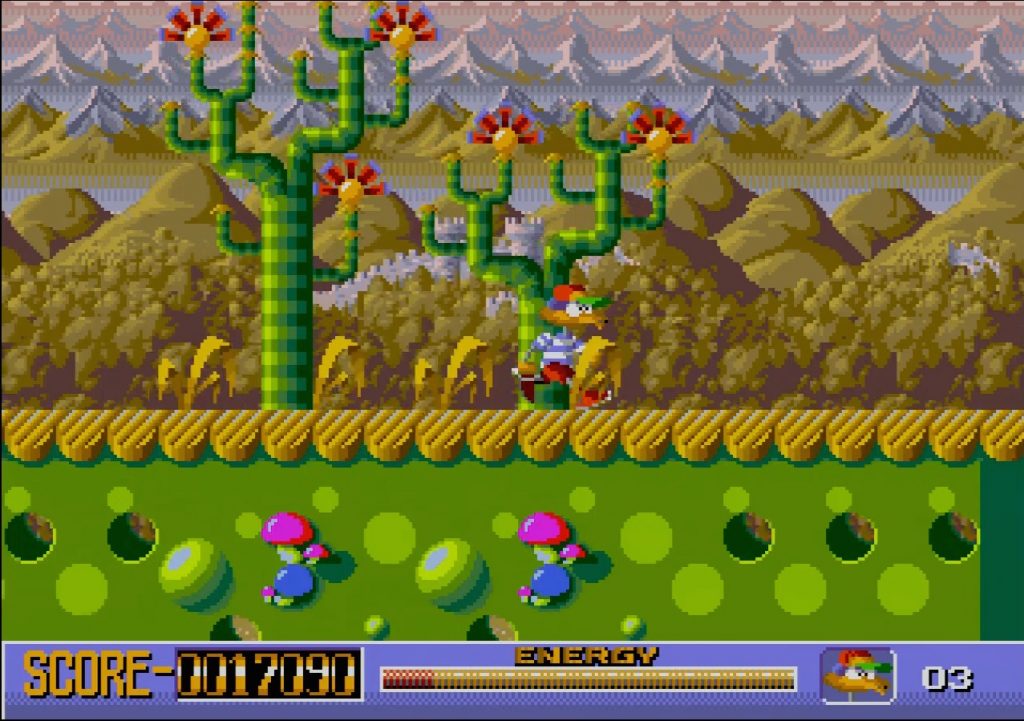 The first thing you’ll say to yourself as soon as you begin Socket is “This looks exactly like Sonic”. Stages are colorful and blocky, packed with  loop-the-loops, and full of enemies that come in the form of animal robots. Socket is the epitome of a Sonic clone. The layout of most of the levels are EXACTLY like levels you’ve experienced in any of the Sonic games. You’ll push right on the D-pad and be zipped around in zig-zag fashion until you either get bounced off a spring, or stopped by an enemy. Unlike Sonic, Socket’s regular walking animation is actually slow. His speediness comes from the numerous speed belts (think of a batting cage pitching machine) that are located at key points in every stage. These speed belts give Socket so much speed that he literally leaves his feet and flies through entire stages, requiring no player input at all. Since there are no insta-kill bottomless pits in Socket, some stages can be finished in less than 20 seconds…I’m not kidding.

Socket contains 7 levels (or time zones) that are each broken down into 3 substages – High Speed Area, Athletic Area, and Labyrinth Area. The High Speed Areas are the stages that require little player input.  Basically, just press right and you’ll eventually end up at the end of the stage. The Athletic Area, although still fast paced, does require a small amount of platforming and enemies to dispose of. Labyrinth Areas are maze-like in nature and require lots of platforming, and also contain plenty of enemy encounters. Labyrinth’s are full of hidden paths that Socket must locate by walking into walls that seem impassible, and jumping into pits that look to be bottomless.

The Labyrinths are designed very poorly and lead to a lot of frustration. The doors that need to be located are always hidden in the most obscure areas and require the player to walk into plenty of walls that seem impenetrable, which is not fun at all.  When you do finally manage to find the first door you’ll be taken to a new area where a single platform will snake towards the top of the screen. When I say “snake” I mean the platform will change directions, and the player must keep up with the change. There are 6 platform choices, and depending on which one you pick, you’ll either be led to the exit door at the top of the stage, or right into a trap where you’ll be dropped back down to choose another snaking platform. Only one choice will lead to the door, so be prepared to travel through this snake-like platform plenty of times. The parallax scrolling that is going on in the background during these segments are headache inducing and don’t help one bit! 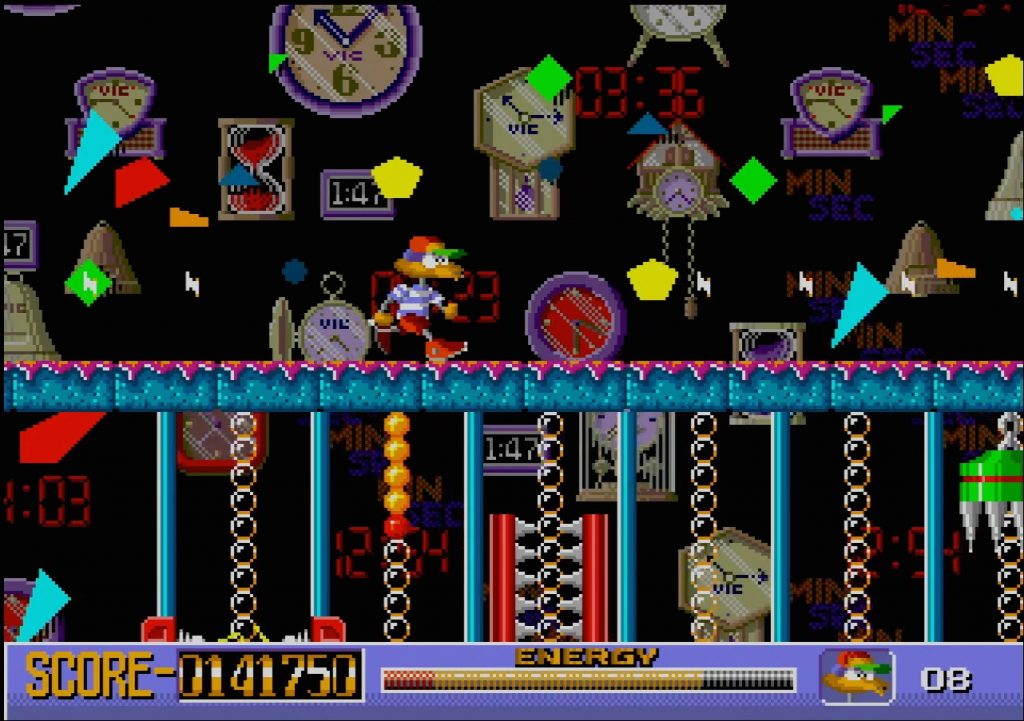 Anybody know what time it is?

Not all stages are bad though. The Olein Cavern contains minecarts that Socket can ride around in while avoiding obstacles and enemies. Hopping in and out of multiple carts was fun and required a bit of thought before proceeding to the next cart. The Future stage also had some innovative mechanics, forcing players to play sections of the stage upside down. Sadly, these two sections are the only original stage ideas throughout the game. I just wish there was more of this innovation, because what is here is actually really fun.

Since Socket is a robot, collecting rings will do him no good.  He needs battery power to survive and must collect lightning bolts to keep his battery charged. His battery is constantly depleting, but taking damage or performing actions such as jumping, running, or kicking will make it deplete faster.  Once his battery power is dangerously low an annoying siren will alert the player until he/she can find some lightning bolts to recharge. This siren sounds exactly like a police siren and is one of the most annoying sound clips I’ve ever heard in a video game. You’ll be frantically looking for lightning bolts to stop it. For those who claim baby Mario’s cry in Yoshi’s Island is the most annoying sound in the world, you haven’t suffered Socket’s battery warning yet. I could have sworn I heard the neighbor’s dog howling whenever I was about to die. 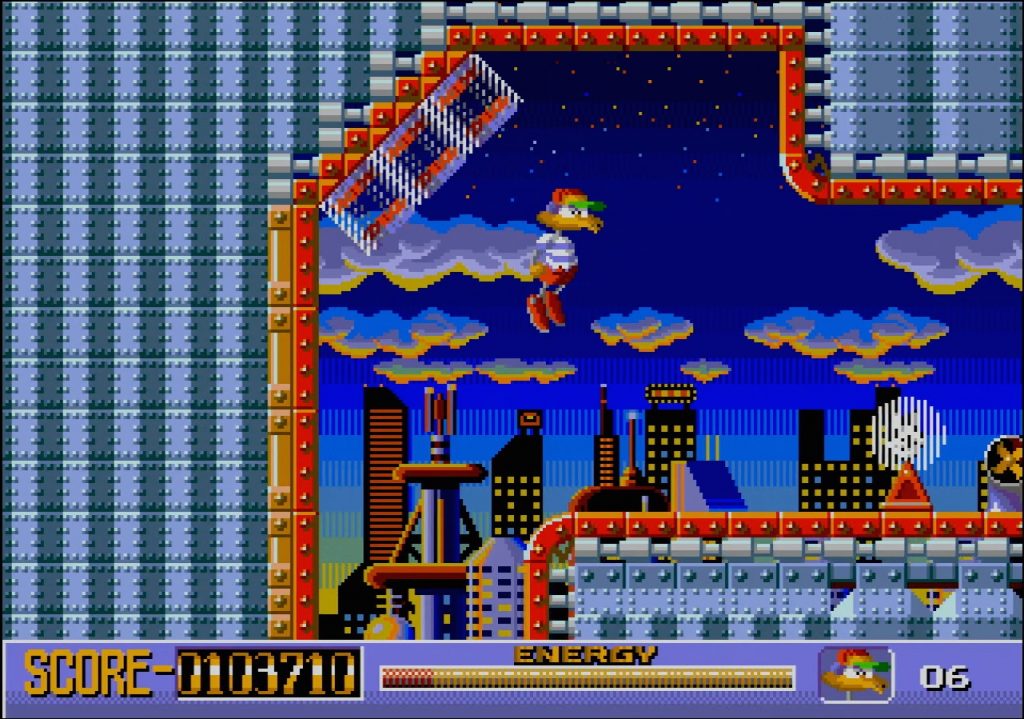 Socket does have one advantage over Sonic the Hedgehog – he can kick his enemies. If you attempt to jump on an enemy’s head, Socket will take damage, but a nice, swift kick will shoot out a small bolt of electricity and take out most enemies with one shot.  A powerful flip kick can also be used when the enemy is up high and out of reach. Interesting enough, this is the only attack you will need to conquer every boss battle in the entire game. The Time Dominator is a pretty weak villain whose only attack comes by the way of a gun that fires extremely slow moving projectiles. Every battle plays out the same way – dodge, maneuver around a few platforms, and perform a jump kick. Rinse and repeat. The final battle does make up for all the weak battles before it, but it’s over rather quickly, and before you know it the credits are rolling.

One really redeeming aspect of Socket is the music. Lead composer, Fumito Tamayma, who also worked on the Trouble Shooter Series (aka Battle Mania in the Japan), has created an uplifting and joyful score that has made every stage’s music memorable.  I found myself humming tunes long after I’ve finished playing. There is a BGM section in the options menu if you wish to take in the tunes without playing, but I strongly suggest experiencing the music along with the gameplay. The music was my driving force to complete the game 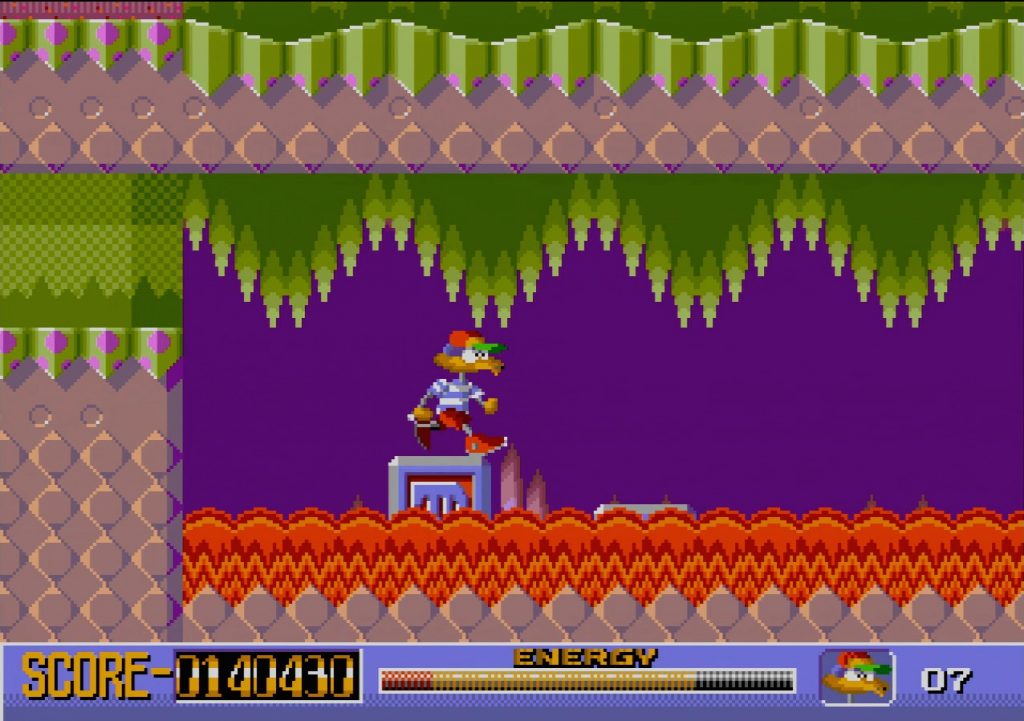 The ‘tude is too much to handle!

I wanted to mention the music at the end of the review to finish on a high note. It may sound like I hated Socket, but I did get a tad of enjoyment out of playing it. If it weren’t for the Labyrinth stages I’d might even consider playing it again in the future. I loved the look of the levels, although they seem to be ripped straight from a Sonic cartridge. The innovative design of the Future and Olein stages were enjoyable, but they’re such a small portion of the game. Socket was completely forgotten about exactly 1 year and 17 days after its release.  That’s the day Sonic 3 launched.