Breaking the law and having a ball 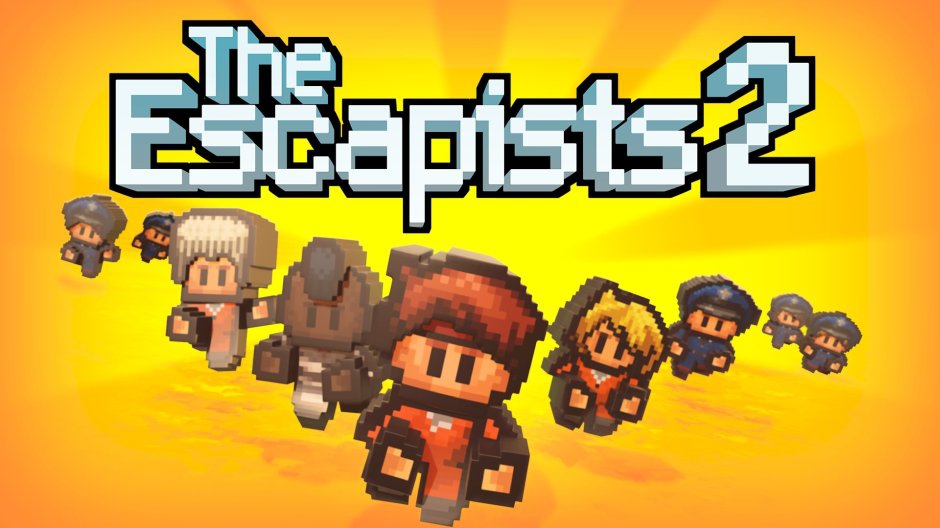 My time with The Escapists 2 could best be described in one word; hectic. It didn’t matter what I was doing, there was always something going on; always some sort of hustle that meant that I could never stay in one place for long. Thinking back on it, it kind of makes sense. There wouldn’t be much point in a game centered around breaking out of prison if the game just let you break out of prison. It’s the resistance that makes a game like this exciting! And let me tell you, there was plenty of resistance to go around.

The Escapists 2 is all about you. In jail. Most likely because you did something bad (shame on you for whatever it was). The reason doesn’t matter, though. What matters is that you are incarcerated, and you’re just itching to get back out into the open world. I feel like the logical thing to do here would be to do as you’re told, and try to get out early on good behavior. This is a video game though, so of course you aren’t going to do that! Nah, you’re going to break free! No one can keep you down! Besides, I’m not even sure that getting out on good behavior is an available game mechanic. If it is, then it certainly isn’t something that I achieved. 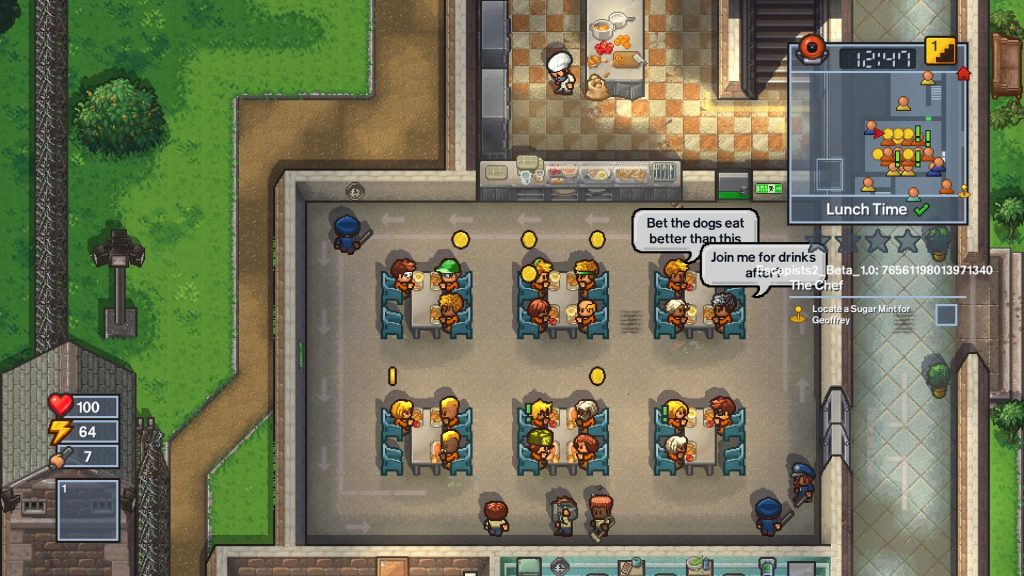 What are you guys in for?

You may have your sights set on freedom, but deciding what to do isn’t the problem. It’s deciding how you’re going to do it. Will you dig your way through to the other side? Maybe you’ll cut through the fence and escape that way. Or maybe, if you’re feeling particularly gutsy, you’ll simply slip on a disguise and walk casually out (which is what I ended up doing). There are several ways to get out, and it’s completely your call to decide which direction you’d like to head in.

The Escapists 2‘s gameplay is quirky little mixture, blending action and strategy together in a sandbox environment. Rather than being centered around a single prison, the game is also split into levels, which get progressively zanier as you advanced. Seeing as how I was playing a preview build however, I was only able to access the first level. Fortunately, that was all it really took for the game to interest me. 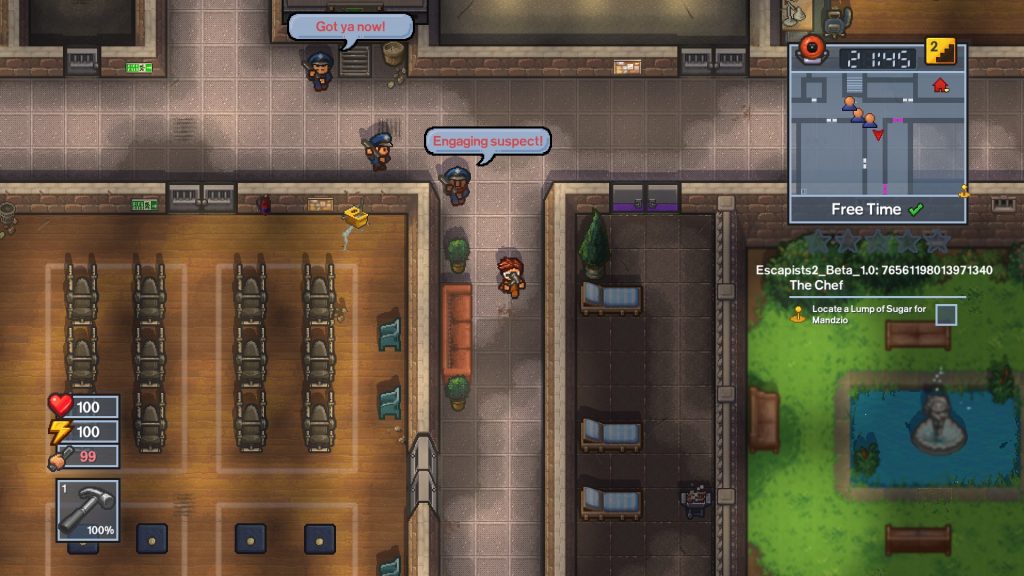 Whatever it was, I didn’t do it!

The entire point of The Escapists 2 may be escaping form jail (duh), but I quickly found found out that the actual escaping wasn’t going to be my main focus. Not until the end, anyway. Up until you make your big getaway, you’ve got to play by the prison’s rules and try to blend in. Prisons have a set schedule — which includes things like designated times for eating, exercise, and working. Following the schedule is necessary — failure to do so will make the guard suspicious of and, eventually, hostile toward you — but it’s kind of a drag at times. One thing I noticed however, was that I didn’t need to actually participate in whatever activity was scheduled. So long as I walked into the appropriate room, I was free to leave. I’m not sure if this was intentional or not, but it made things a lot easier.

While day-to-day life as an inmate does mean following a regiment, but not everything is structured. A good chunk of each day is dedicated to free time. As the name implies, you can pretty much do whatever you’d like — craft items, run errands for people, follow guards, or just walk around and steal stuff. The world is your oyster! Your dingy, incarcerated oyster. While almost anything that you do can be beneficial during free time, crafting items seemed to be the most important. 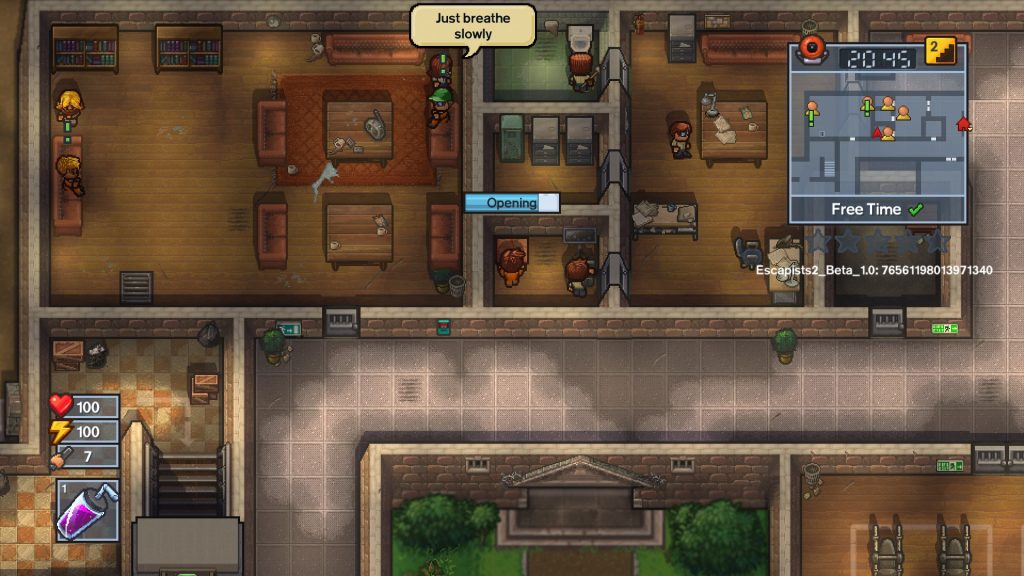 You guys aren’t filming any of this, right?

Regardless of how you decide to break free, you’re going to need a decent setup. A decent setup that generally requires items that you can’t just find lying around. On the whole, crafting is relatively easy. All you need to do is spend a day or so scrounging around for items, and make sure that your intelligence is high enough to be able to craft everything. Acquiring the right items be difficult if security is on high-alert, especially with the contraband-sniffing dogs running around, but security is normally pretty lax. So long as you’re never in one place for long, getting what you need isn’t too difficult.

After getting everything ready, it’s finally time to break out. There are several obvious ways of breaking out, such as making copies of keys or cutting your way through the fence, but The Escapists 2 also has some more clever ways of escape. For instance, the level that I was playing featured a camera crew, which was there to film prison life for a documentary. Since they came and went daily, it was possible for me to exit with them. So, I ended up stealing some civilian clothes, crafting some fake camera equipment, and literally walked out of the jail. 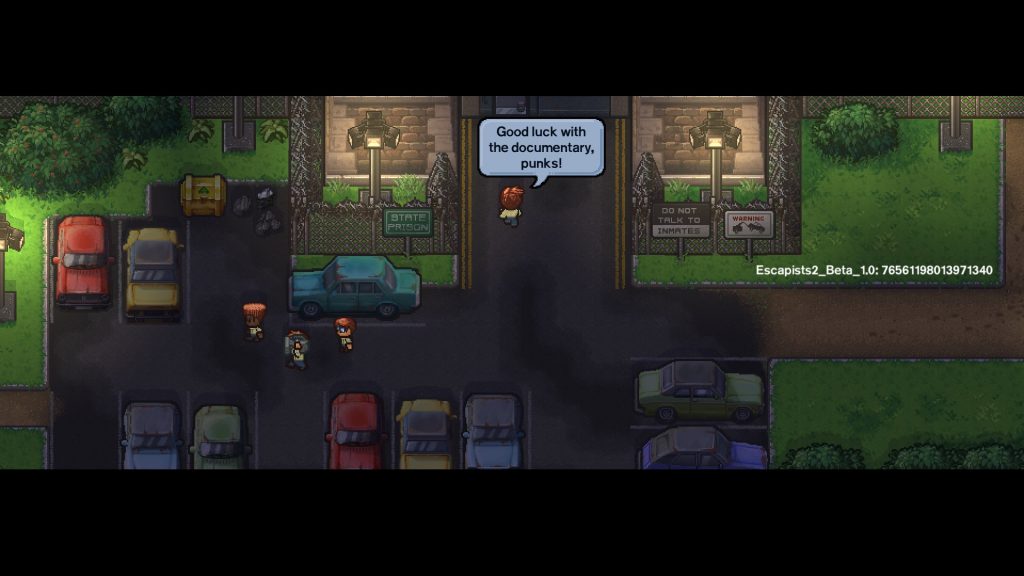 So, uh… you’re really just going to let me walk out of here, huh?

I’m not sure if my way of doing things was the easiest, but it was definitely the most fun. I appreciated the fact that The Escapists 2 presented multiple ways of attaining victory. And the best part was that I didn’t even utilize half of what was in the level. Because of that, it was much more enticing to head back into jail once again, if only to figure out new ways of escaping. The game really seemed to reward creativity. And the fact that there aren’t any Game Overs makes experimenting a lot of fun.

So far, The Escapists 2 feels really solid. Its sandbox-style play and lack of any sort of time limit allow you to play the game and figure things out at your own pace, and its pixel-style artwork makes something that would normally be pretty scary look very whimsical. Due to its setup, the game also manages to create a sense of urgency, even when there isn’t any. That’s pretty impressive, if you ask me. Crime may not pay in real life, but it sure is a lot of fun in The Escapists 2. 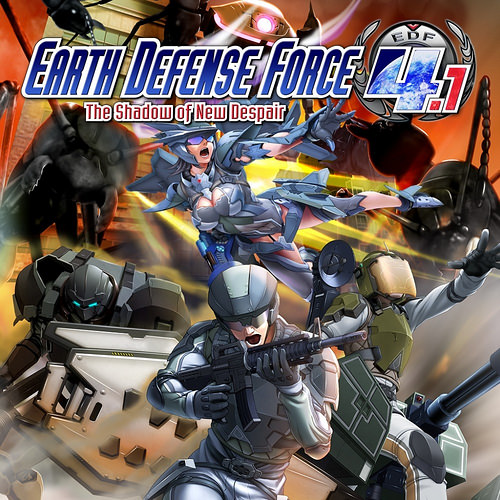 A bug hunt of epic proportions I never quite understood the cult fascination behind the Earth Defense Force series. While my knowledge of the the titles was admittedly cursory at…