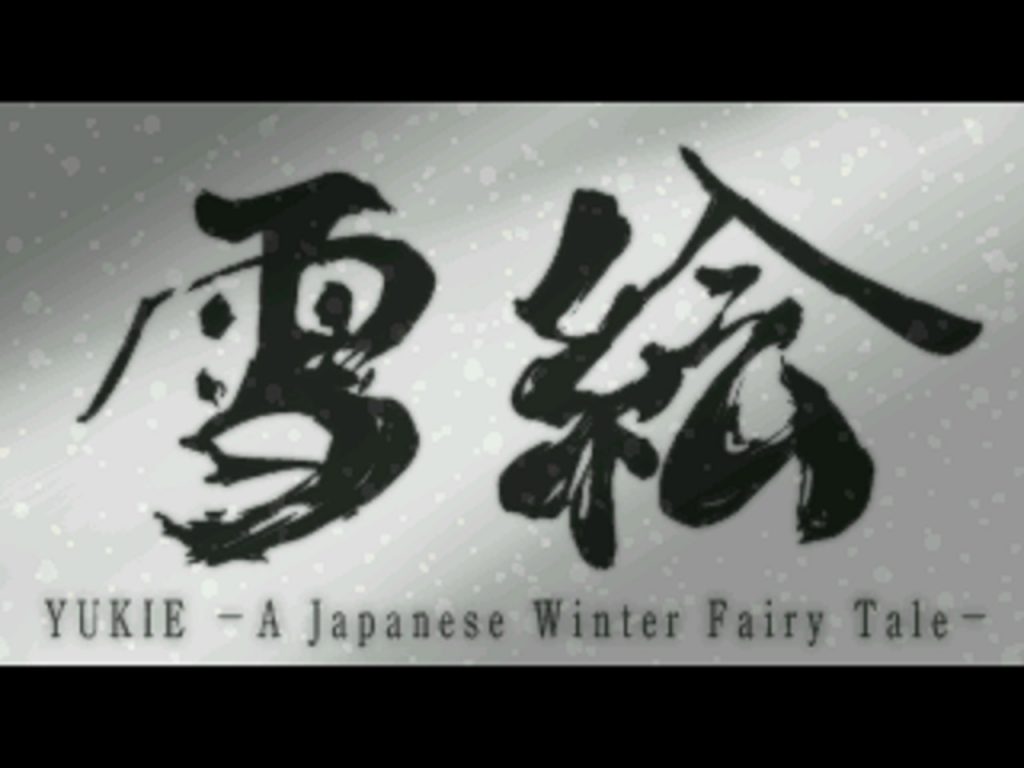 What exactly makes a game a game? I’m sure that almost all of you out there have different answers, so I’m not going to dive into all of the different technicalities and “what-ifs” garnered by this question. Regardless of what your answer is, it’s safe to say that all of us can, somehow or another, put things into two distinct “game” and “not game” categories.

But of course, there are occasionally things that come along that blur these lines. Things that might look and act like a game, but maybe still don’t have enough “game-ness” to define them as such. Yukie: A Japanese Winter Fairy Tale ends up falling into this group. This is all kind of getting existential-y, so I’m going to drop the act and simplify it. Although technically a game, Yukie‘s setup and overall lack of of player interaction make it feel more like some kind of interactive comic book. A cool-looking comic book, but a comic book all the same.

Yukie: A Japanese Winter Fairy Tale follows the story of a young man by the name of Yukiji, and his quest to hunt down the winter spirit Yukie. The youngest member of his family, Yukiji’s duty to slay Yukie has been obvious since his birth. Of course, that’s hardly going to be easy. Although Yukie takes on the appearance of a frail woman in a kimono, her power seems to know no bounds. In fact, she’s gone as far as throwing the world into an Eternal Winter ever since the death of her beloved many years ago. Sheesh, some temper… 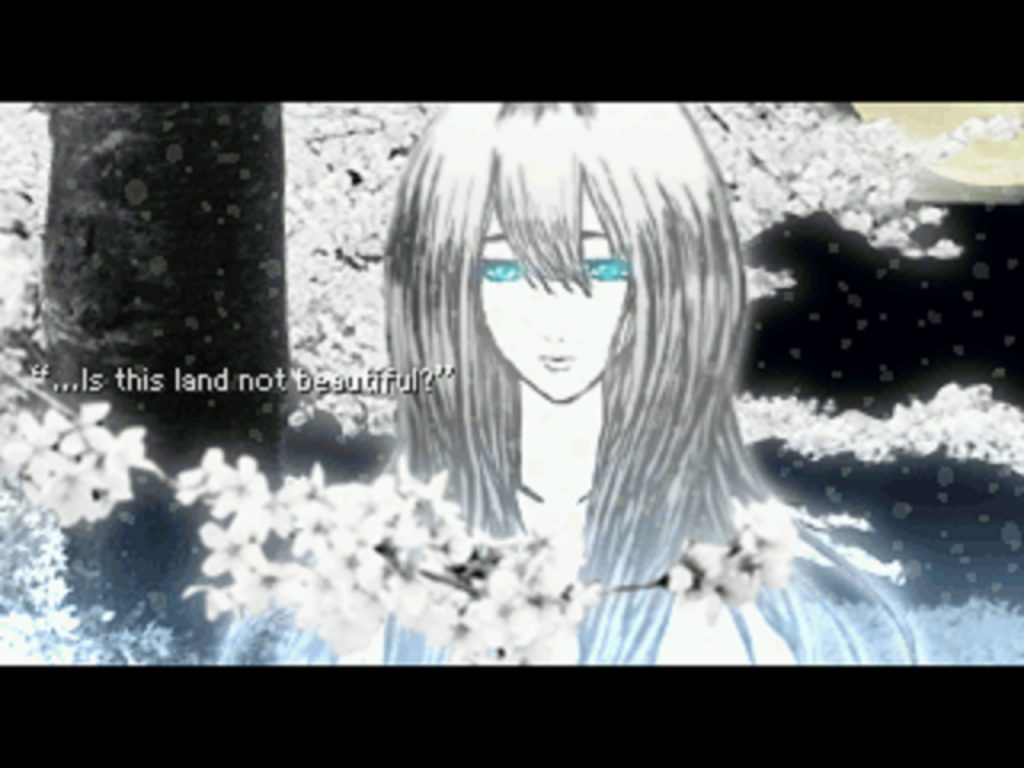 Beauty isn’t everything, you know.

Yukie‘s narrative is definitely the game’s strongest point. For those who don’t know, Yukie is a re-telling of Yuki-onna — a classic, and incredibly popular piece of folklore in Japan. Yuki-onna’s story has changed many times throughout the years — far too many times for me to get into in this review — but a few things have always stuck around. In almost every iteration of her story, she’s been described as a tall, beautiful woman with skin the color of snow (pretty fitting, all things considered), and generally wearing a kimono. Many of her story are based around themes such as love, loss, and death, and often (if you haven’t figured it out) end in tragedy.

I have to applaud Yukie for the way it handles the story of Yuki-onna for a few different reasons. For starters, Yukie does not portray Yukie (Yuki-onna) as the star or protagonist of the story. Actually, it doesn’t portray her in a positive manner at all. Rather than appearing as love-struck or sad, she is instead a villain. And a selfish one at that. It’s sad that the love of her life is no more, but damning the rest of the world isn’t exactly what I would  call sporting. Of course, this helps you sympathize with the protagonist. After all, who would want to go on a quest with the end goal of slaying someone nice? (Don’t answer that.) 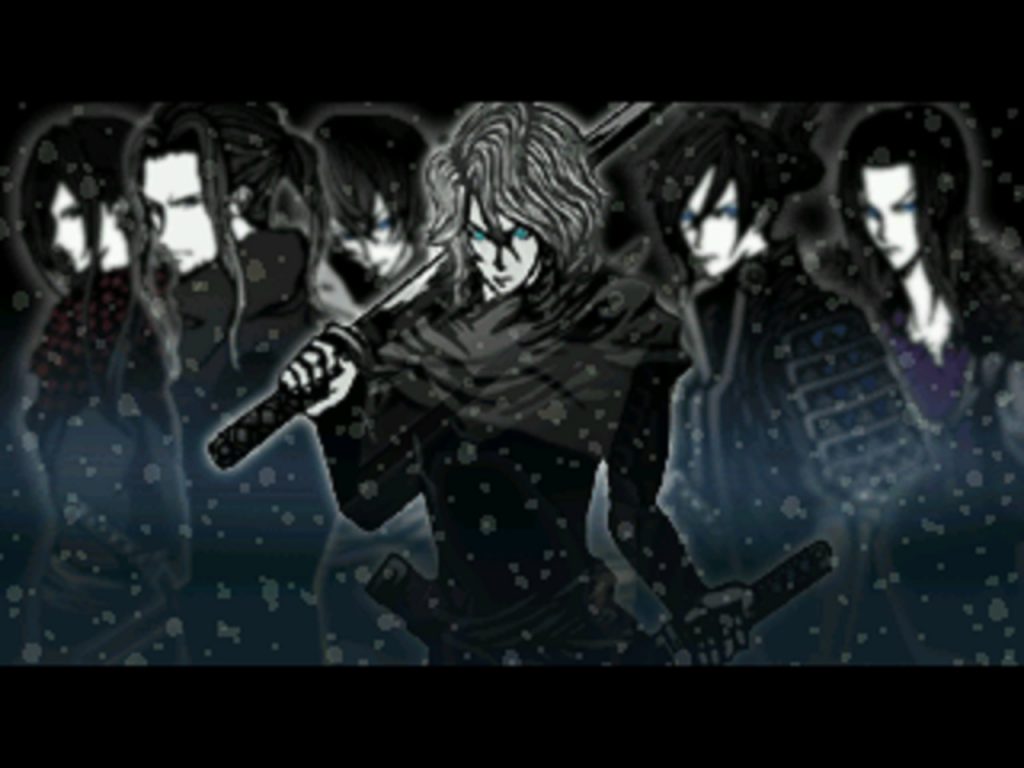 Keep your eyes on those family ties.

I can also appreciate how Yukiji and his family play their role within the story. As I have said previously, Yukiji is the latest in a bloodline destined to fight Yukie. Regardless of who he is as a person, his destiny has already been sealed. His lineage is set up similarly to that of Belmonts of Castlevania and, while tragic, is very interesting. Also, much like the Belmonts and Dracula, Yukiji’s bloodline has ties to Yukie. And, while I can’t delve into the story any further without spoiling it, I can assure you that the connection is an important one.

If Yukie‘s quality storytelling is like the wrapping on a present, then the atmosphere would be like the bow on top. Yukie‘s hand-drawn aesthetics are a unique combination of serene and forlorn, and the way in which characters move very much sets the game up to look like a fairy tale pop-up book. The story itself is also fully narrated in Japanese. And though I have said it before, I will say it again. No, I do not understand Japanese. That does not stop me, however, from being able to discern quality voice acting.

Footprints in the Snow

I’m glad that I got to compliment Yukie on it’s story, because I can’t really praise its gameplay. In fact, I’m not even sure how to begin describing it. For the most part, all you’re doing is holding a directional button to move in a specific direction. Given the fact that you’re only allowed to move in one direction per level, it’s impossible to mess up. Fortunately, what I could best describe as the “anime walking simulator” is accompanied by on-screen text and some darn good voice acting, but the fact that all you’re doing is holding down the right or left directional button on your PC isn’t exactly what I would call riveting gameplay. 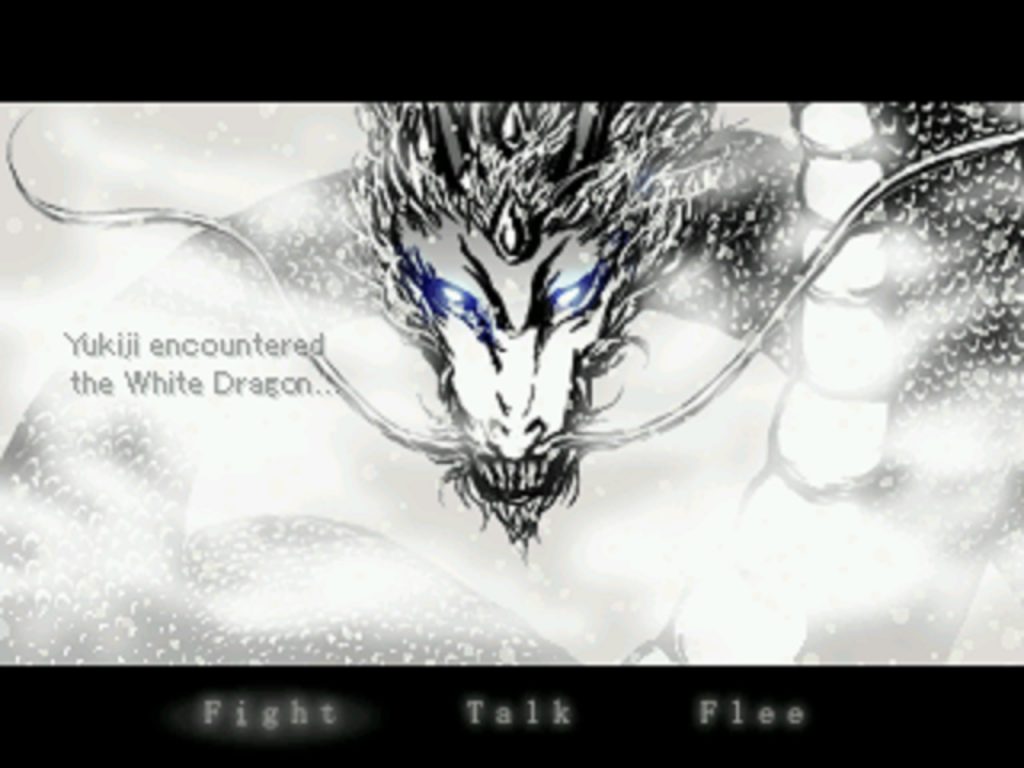 Sometimes you’ll encounter a fox. Other times, your encounters aren’t so friendly.

Walking isn’t all that you do, though. You’ll occasionally encounter enemies along the way. This game was made using RPG Maker and, because of that, you might expect combat to be your typical turn-based affair. But it isn’t! Instead, combat all boils down to a quick-time event. During a fight, the game will slowly and silently pan in on Yukiji’s face. When you hear a noise and see his eyes open, you hit the space bar. If you’re fast enough, you’ll kill the enemy. If you’re not, then the enemy gets to retaliate.

As you progress, you will also meet your deceased ancestors. Most of the time, after a brief conversation, they will bestow upon you their sword. Naturally, you’re probably thinking that these swords are equipment. Ah, but you would be wrong! Instead, these swords give Yukiji new abilities. Cool, huh? Yeah, well maybe a bit too cool. After picking up several of these abilities (which are required), the game essentially begins to play itself. While these abilities save you from experiencing QTE burnout, they also take away what little player interaction the game has left. And, if you remember, there isn’t a whole lot to begin with. 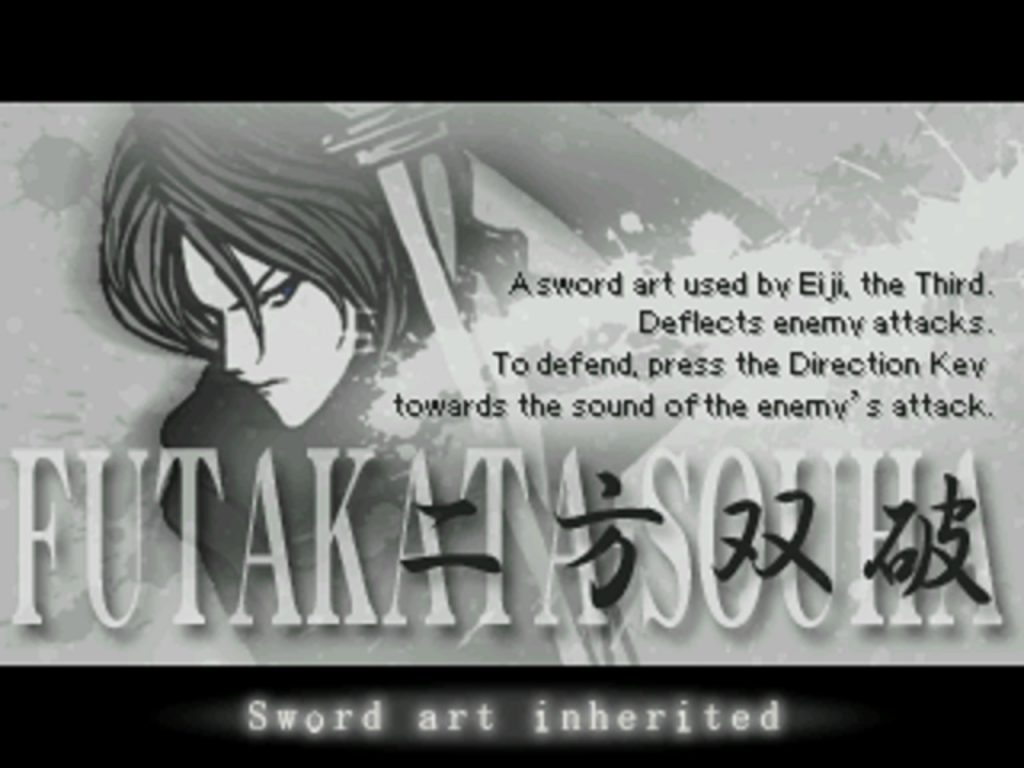 Getting new skills is cool. Getting so many skills that the game plays itself is not.

Stylistically, I can appreciate everything that Yukie has going on. The minimalist approach to movement and the “one and done” QTE combat fights fit the traditional Japanese style of the game very well. But the interaction is just too minimal for my tastes. And the fact that the pacing of the story itself is somewhat slow makes actually playing the game a little on the boring side.

A Game, Only by Definition

Let me be clear on something. I do not dislike Yukie: A Japanese Winter Fairy Tale. It has several things going for it. Its narrative puts an interesting spin on a classic story, it features nice, hand-drawn graphics, and the voice acting really blew me away. But, ultimately, none of these things a good game does make. While Yukie did well with telling its story, it faltered on its gameplay. As someone who can appreciate visual novels, I know that not every game has to incorporating heart-pounding action. But Yukie just missed the mark a little bit.

Yukie really only feels like a game in the loosest sense of the term. Still, I won’t condemn it. I really think that ImCyan is onto something here, and I would recommend the game to anyone who enjoys Japanese folklore, or wants a good story and is capable of overlooking the less-than-riveting gameplay implementation. Odd though it may be, it’s worth a try. And hey, you can’t complain about a $2.99 price tag.

Full disclosure: This review is based on a copy of Yukie: A Japanese Winter Fairy Tale given to Hey Poor Player by the Publisher