Jumping from Cloud 9 to Cloud 10 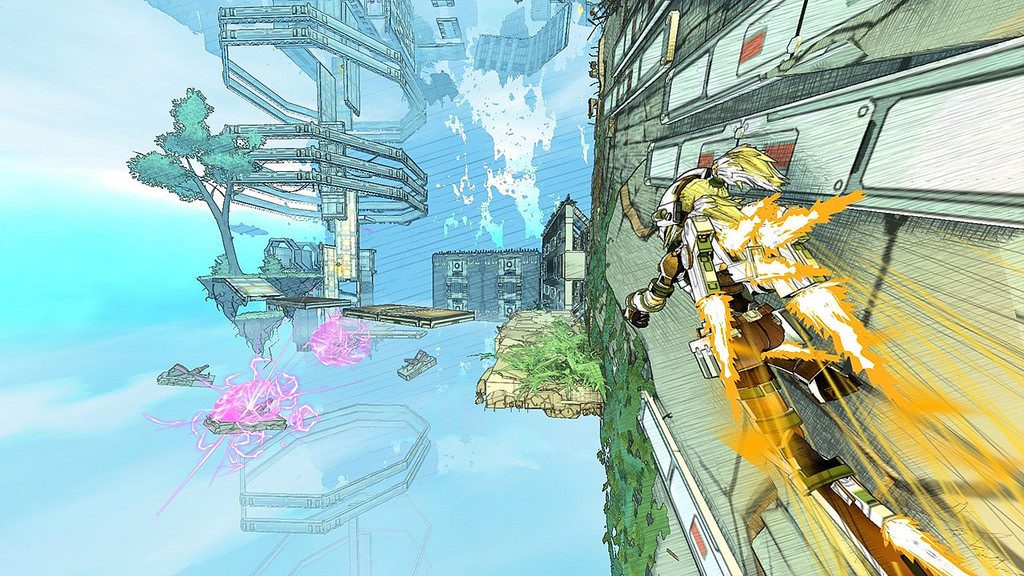 A little while ago, I watched my nephew play Sonic Adventure – one of the earlier 3D Sonic games on the cult-classic, but short-lived Sega Dreamcast. What struck me immediately was the jarring shifts between measured, precise platforming and breakneck running segments. A lot of fans felt that Sonic’s transition to wide-open 3D spaces never quite worked with the blue blur’s variety of focused, high-speed platforming. What Super Cloudbuilt proves is that you CAN have a 3D world that combines high-octane platforming frills while still being intuitive, interactive and – most importantly – fun!

Super Cloudbuilt’s protagonist is an amnesiac soldier called Demi, who is an a coma in some mysterious abandoned hospital. To unlock her memories and possibly escape her dire situation, she must navigate her phantasmal blue avatar to various rooms where she’s required to complete curiously videogame-like challenges. Luckily the plot is seldom more than some cryptic lines of dialogue Demi exposits while you’re dashing her to the next level. The focus is absoloutely on the action, and the very first level gives you a shotgun blast of new concepts to start mastering. 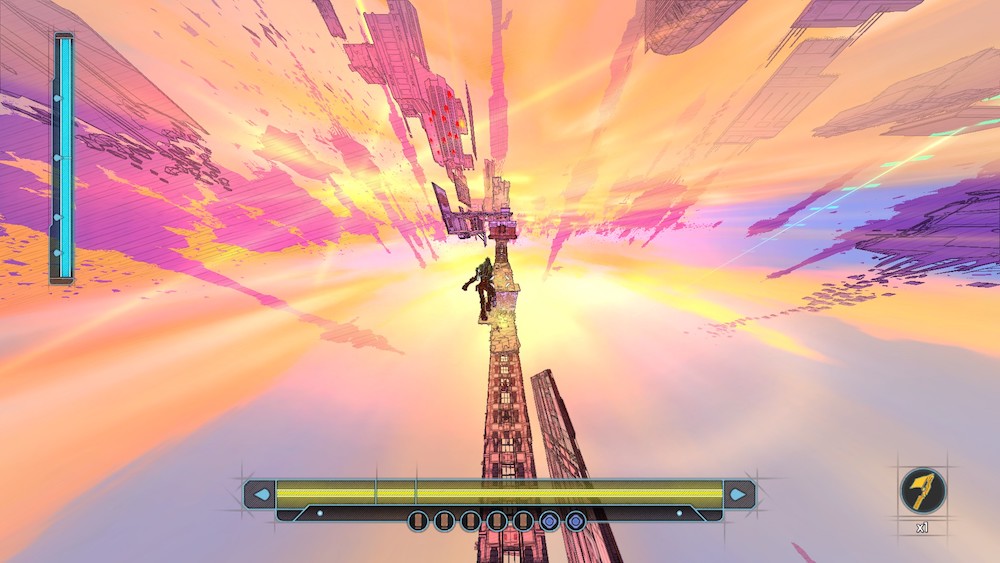 Flying into the sunset!

Demi is equipped with plenty of staple platforming abilities, including a double-jump, a forward dash and a rocket-powered wall-run. What’s unique about Super Cloudbuilt is how all these abilities run off an energy gauge, meaning you’ll always have to be mindful about how much energy you’re consuming when rocket-parkouring around. This means many of the platforming sequences can unfold like a high speed puzzle. A series of parallel walls might seem perfect to wall-jump between, but you might need to get an initial burst of speed from elsewhere to sustain your momentum first. It becomes especially tricky when you have to boost-run along each wall in such an artistic way as to avoid rows of floating mines.

Despite the complexity of the leaping and bounding you need to perform, everything is surprisingly intuitive and easy to pick up. I was initially worried about being frustrated by all the mechanics I was expected to master, but I instead ended up feeling a type of Fonzie-esque shades-wearing cool after rocket-surfing over ramps. (And the game didn’t jump the shark after these bits either!) 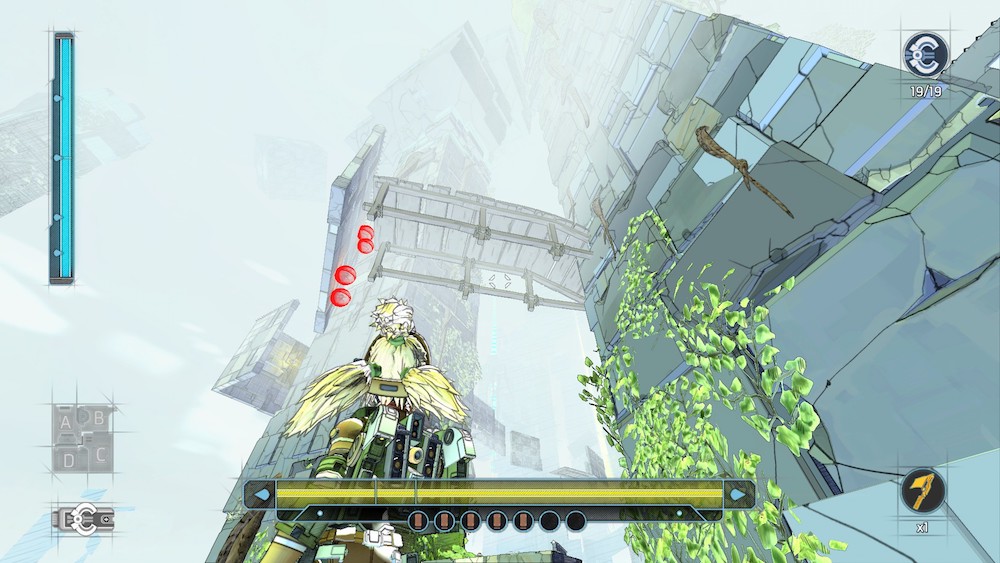 The towering levels with leaf and stone almost reminded me of Ico/Trico.

Super Cloudbuilt’s mechanics of conservation are further ratcheted up by the lives and chekpoints system. Unlike may games, which automatically provide you with checkpoints just before every waist-high wall or any possible peril, Super Cloudbuilt is fairly sparing with the placement of its checkpoints. However, you can actually manually plant checkpoints in the ground – in the form of glowing flags – to provide you Since you only have a limited number of lives on each level, it’s a good idea to place these checkpoints juidciously. Not only does this system ratchet up the trickiness and tension of each level, it also adds an extra strategic layer to each level. It’s a pleasingly challenging compromise between the modern era and the arcadey lives/continues system of platformers of old.

The look and feel of Super Cloudbuilt works well with the straightforwardness of its run-and-jump gameplay ethos. Pounding techno beats drive you forward through the starkly outlined cel-shaded scenery. At the start of every level, it’s really worth looking out over the beautifully blocky floating archipelago of platforms spiralling upwards to the shiny green exit far at the end. 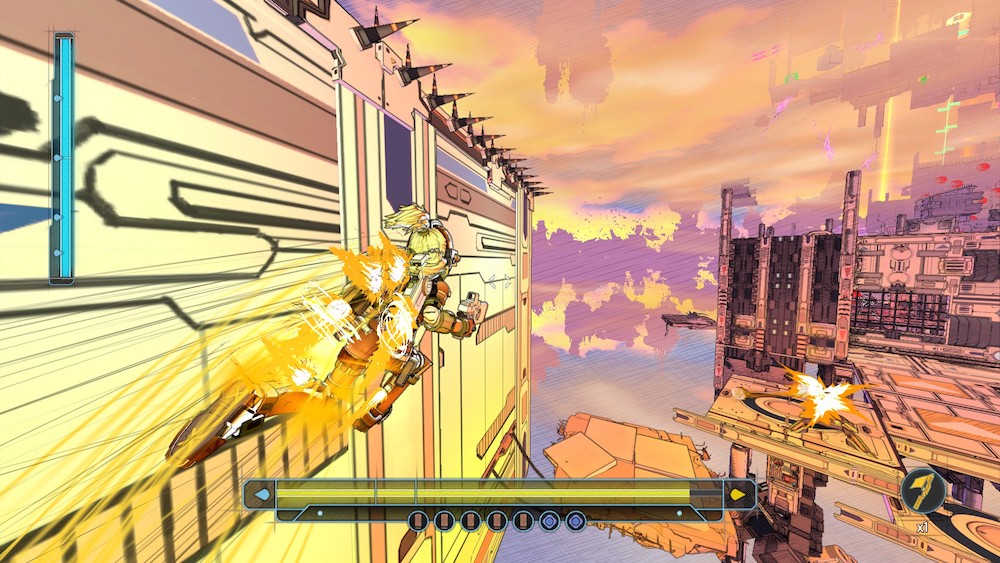 Rocket-running along walls while under fire from a mechanized turret is another day in the office for Demi.

What’s very compelling about Super Cloudbuilt is the way it adds a measure of RPG-like character-building to the proceedings without distracting form the platforming. At the end of each level, there’s unlockable reward boxes which boost your life/energy/lives or unlock new upgrades for your gun. Some of these unlockables you can gain from finding various multicoloured keys hidden around or under the plentiful platforms (for those who liked searching for Chaos Emeralds as much as dashing through loop-the-loops in Sonic).

Some of these unlockables are tied to special challenges, which you can play when a floating blue ball of energy leads you to an already completed stage in the hospital level hub. Most of these challenges mean you’ll have to think of new ways to complete a level, such as the “pacifist” challenge where you’re not allowed to use your gun. This made me have to re-evaluate an earlier level where I’d previously been able to shoot through barriers, forcing me to boost up a a nearby pylon and wall-jump over it the energy field instead. 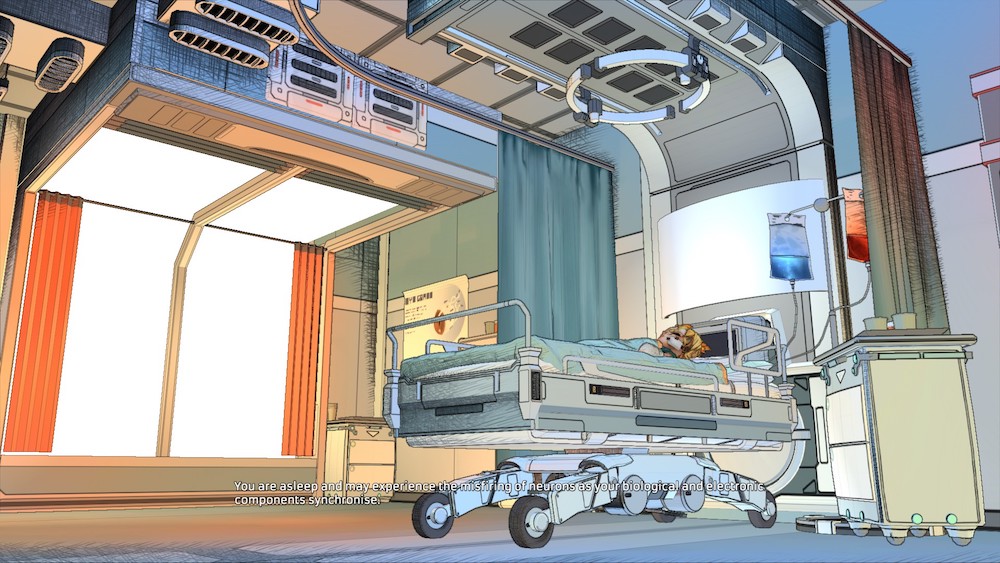 The hospital serves as a cryptic-exposition-rich hub where Demi’s spectral form roams the hallways while her body lies in a coma.

What’s key to these various side-missions and challenges is that they don’t detract from the core experience of high-octane, nail-biting speed-freakery. You can choose to take them on or ignore them as you fancy, and you’re consciously choosing to adopt a more ponderous playstyle without it being a forced pit-stop on your race through each stage.

Combat is a part of Super Cloudbuilt, but it can be a bit of a let-down. Your blaster gun gives you a choice of three different attacks: a close range shotgun burst, rapid-fire long-range homing bullets and an alternate third attack. What’s often baffling is how the default homing bullets are so ubiquitously preferable to virtually any other form of attack. In the sprawling levels, featuring plenty of wide-open space, there’s seldom any automated turrets or malignant spider-bots you can’t simply pepper with guided shots from afar while strafing behind cover. It’s clear from the outset these floating, vertiginous levels are designed to test one’s platforming mettle, and combat feels almost an afterthought – often worth dashing past altogether.

Despite some sometimes lackluster combat, there is a metric butt-ton of playability packed into every level of Super Cloudbuilt. You can blast through each stage at breakneck speed, play scavenger hunt looking for the various keys or complete levels in new and unorthodox ways with the many challenges on offer. Everything to fundamental game mechanics to the beautifully vertiginous levels – composed entirely of platforms in a immense void – suggests a title focused on being a pleasingly purist platformer. Super Cloudbuilt knows exactly what it wants to be and does a rocket-propelled series of walljumps straight towards its glorious goal.

Sherlock Holmes is back on the case to solve another collection of capers Sherlock Holmes: The Devil’s Daughter is the follow-up to Frogwares’ 2014 release, Crimes and Punishments. The…