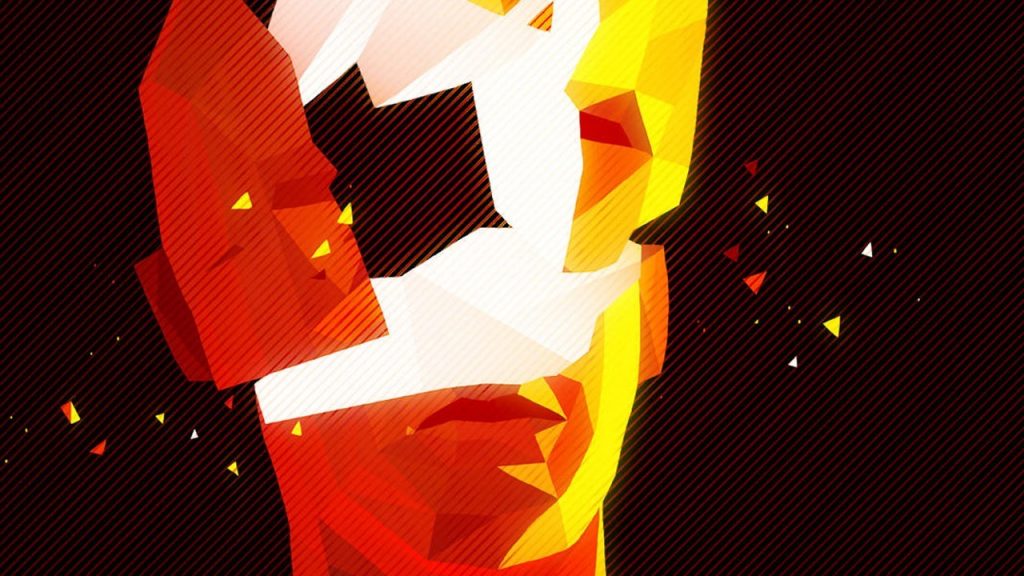 When SUPERHOT  VR launched on the PC last year it took almost everyone by surprise. Graphically, it didn’t look all that impressive. It didn’t have an amazing musical score or bass rattling sound effects. Hell, there wasn’t even any kind of deep or engrossing story to talk about. What SUPERHOT VR did have though was one innovative, stylistic, and most importantly, fun gameplay mechanic – the ability to control time. But wait! That’s been done a million times already! Yes, it has, but not quite like this. 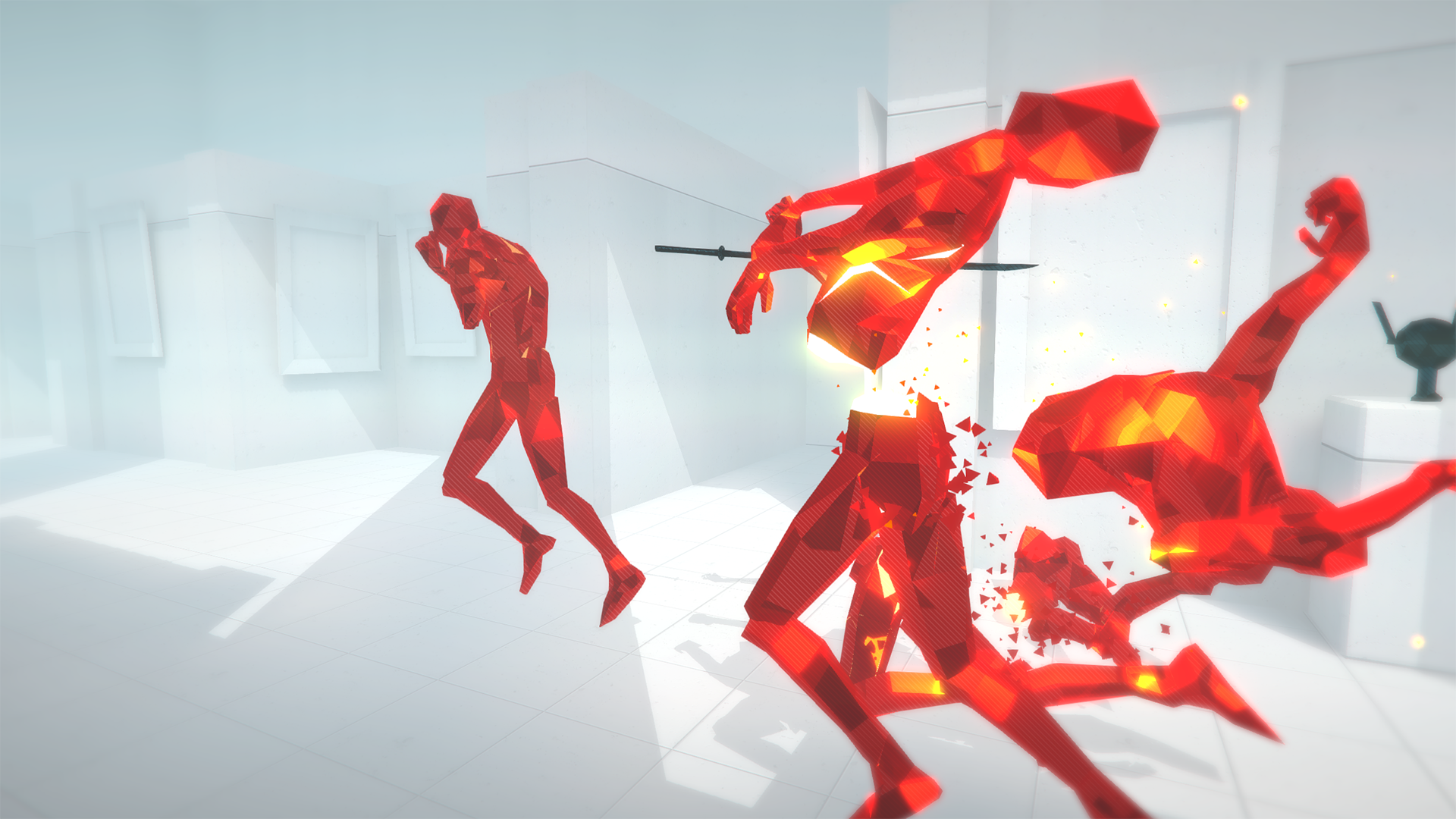 If you haven’t experienced SUPERHOT before, let me explain how it works. Time doesn’t move unless you do. You move quickly, and time will move quickly. If you slowly move your hand through the air, everyone and everything around you will move just as slowly. Toss a few guns and knives into the mix, and now you have yourself a party.

If that sounds confusing let me walk you through a basic gameplay scenario. A very bad guy (he’s red, so he must be bad) with a gun is running towards you. He takes a shot, but as his bullet is leaving the chamber you stand as still as possible. You can now see the bullet suspended in mid air, and because of this you can react appropriately to dodge it. Slowly moving your head out of harm’s way will in turn move the bullet. As it zips by you, you can now reach out, snatch the gun out of your attackers hand, and fire a few slugs into him.

Of course, you won’t just be up against one guy at a time. Several enemies are out to get you, and when dozens of bullets are flying at your face, it becomes a game of perfectly timing your movements while slipping in between a barrage of bullets. Due to the nature of your time control ability, careful planning is needed to dispatch enemies that are running from left to right. It’s times like these that SUPERHOT becomes a sort of puzzle game that requires lots of trial and error. Who do you take out first? What reactions do the other enemies have when you take out the guy that’s furthest away? There is a lot to think about, but luckily you can take your time and think as slowly as you need to.

So, how does the transition to Sony’s PSVR headset fare? Well, it kinda sucks, sadly. Out of all the PSVR games that I’ve experienced so far, SUPERHOT VR has required the most physical movement. As most PSVR owners know, moving too far to the left or too far to the right will put you out of the camera’s view. You’ll be dodging bullets mind you, so moving your whole body is required to survive. In the two hours it took me to complete the game’s campaign I’ve gotten the dreaded “Out of Play Area” warning about 20-30 times. I’ve had my guns float out of my hands more times that I can count. Worst of all, the PlayStation’s camera was tracking movement even though I was standing completely still, which caused death after death after death due to the movement/time mechanic.

Get inside their head 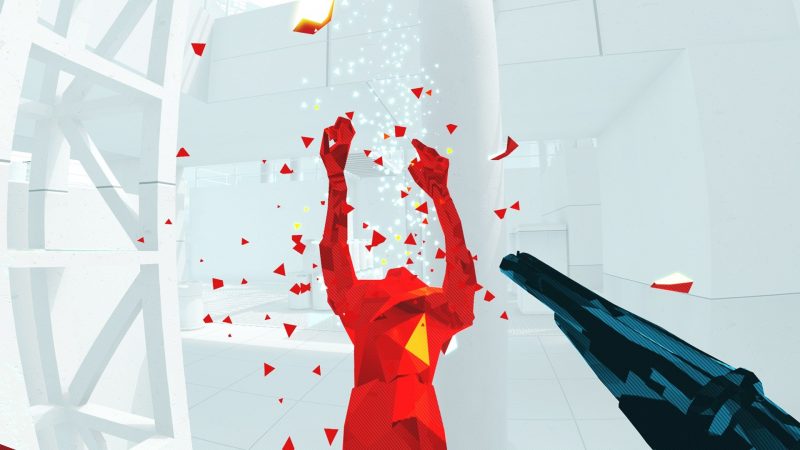 I can’t put the full blame on the PSVR’s dreadful tracking though. Several levels in SUPERHOT VR place weapons on the ground or too far out of your reach. While crouching down to acquire a gun, nine times out of 10 your knuckles will be rubbing against the carpet while you’re desperately grabbing for it. Take a step to the left or right…oh, wait…out of play. Time to reset the PSVR’s tracking again. Be aware that all of this movement is also allowing the enemies to move. By the time you do manage to acquire a gun you’ll probably have 3-dozen or so bullets coming toward you.

Throwing objects at enemies is another element of the game that I never truly figured out. It may just be me, but when I would throw an object at the enemy it would never take the path I intended. If I did manage to connect with the enemy it was either bouncing off ground hitting their shins, or it was just plain luck. Again, I can’t blame the PSVR’s tracking on this as I feel it may just be my own fault. 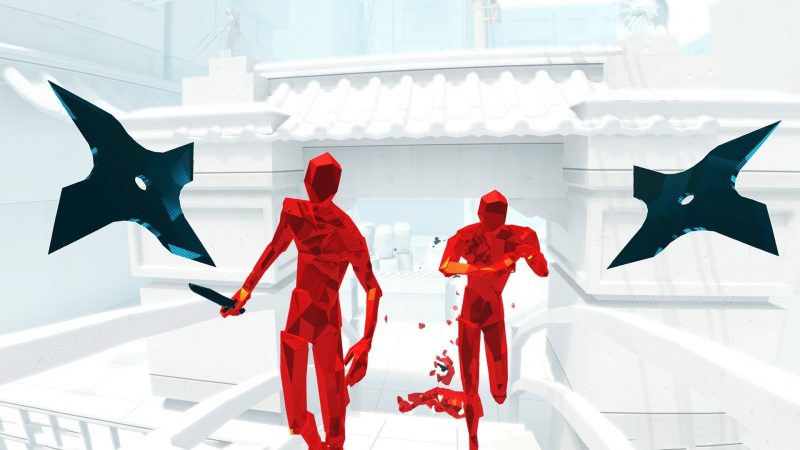 On the seldom occasion that the tracking does work the game is simply amazing. Dodging shotgun blasts, slicing bullets in half with knives, catching guns out of mid air; it just makes you feel like a total bad ass. It’s a feeling like no other when you finally figure out an area that was giving you trouble, and hearing the “SUPERHOT, SUPERHOT, SUPERHOT” never get’s old. It was also a nice discovery to find that I could take cover behind pillars and boxes. On occasion I’d chill behind a desk until the bullets stopped whizzing by, and then spring up to unload my clip into the enemy. As long as I didn’t have to move to find cover, the cover system worked great. The levels that worked best required the least amount of movement, but unfortunately that’s only about 10% of them.

Visually and sound-wise, the PSVR version of SUPERHOT VR is pretty damn close to it’s non-VR counterpart. The game is not known for it’s graphical prowess to begin with, but the shiny, ruby-like look of the enemies are very stylistic.  Watching them shatter to pieces when being struck by a bullet is satisfying, but I personally got a kick out of them falling from heights and breaking into thousands of pieces when hitting the ground. There isn’t any music to talk about, as mentioned previously, but the gun sound effects are decent enough. If you’ve played SUPERHOT on consoles, you’ll know what to expect.

If you do wish to experience SUPERHOT in VR I strongly suggest you get yourself a decent PC and a Rift. The PSVR’s poor tracking is a total bummer and shows how far we PSVR owners are from full VR experience. I can’t fully blame the hardware though, the developers should have known the limitations and planned around them. SUPERHOT is not ready for PSVR, and PSVR is not ready for SUPERHOT.

Full disclosure: This review is based on a PlayStation 4 review copy of Superhot given to HeyPoorPlayer by the publisher. 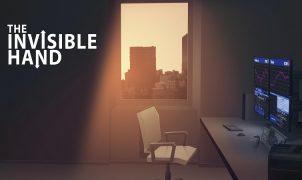