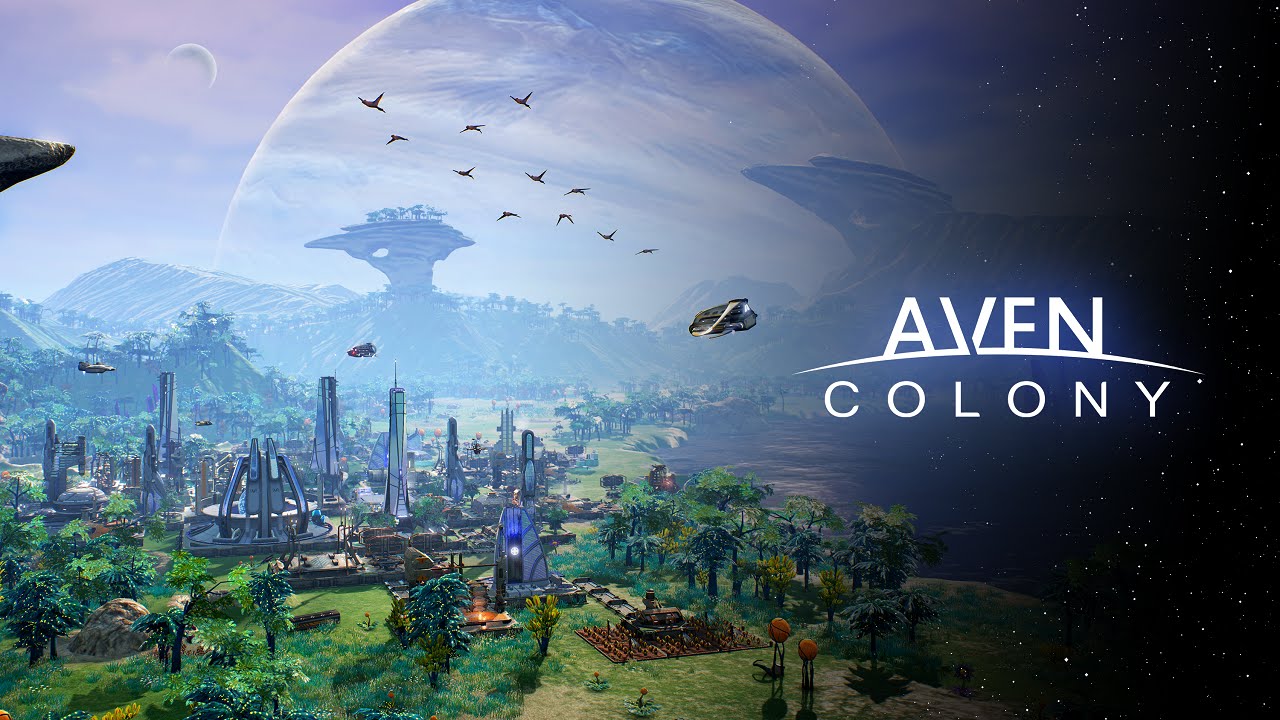 When I previewed Aven Colony a few weeks back, I liked what I played, but was honestly impressed more by the port job done with the game than with the game itself. There was nothing wrong with what I played, not at all. All systems were well thought-out, and there was a smoothness of connection between the different types of buildings that I built and managed. That worked better than a good number of this kind of games are able to pull off. It was easier to play this city-builder on a console than has been the case with almost any other I’ve played.

But I had a moment near the end of my proper review time with Aven Colony where I realized I couldn’t put a pin on exactly when the game became actually fun. I still can’t, and I think that’s the basic, hindering issue on what is otherwise a very competent package.

Biome by biome, bubble by bubble 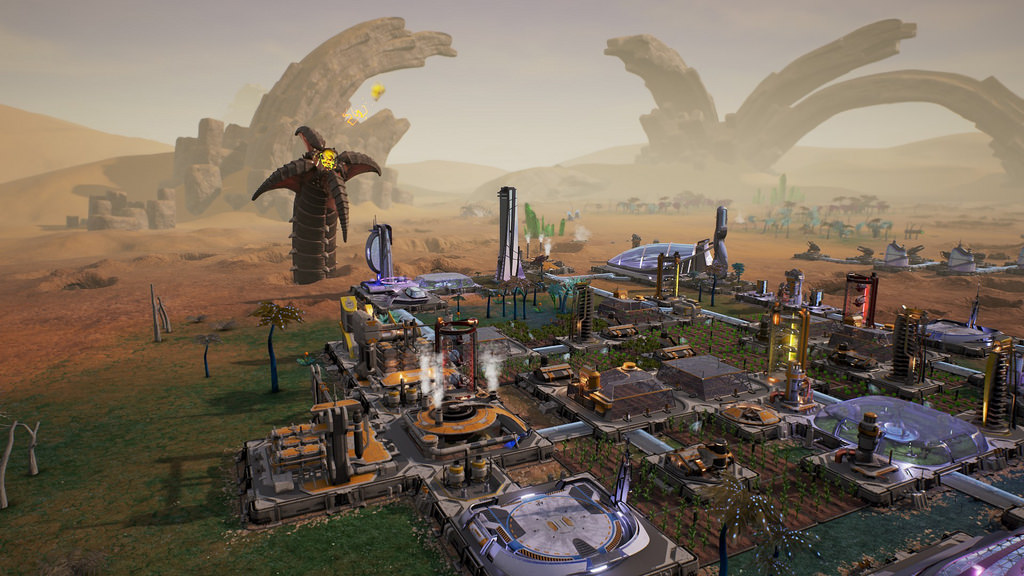 Aven Colony is a city-builder with a substantial twist. Instead of building skyscrapers and suburbs anywhere on planet Earth, you’re doing it on the strange and occasionally-hostile planet of Aven Prime. There’s a plentiful handful of biomes on the planet, from lush fields and forest to harsh desert and waterlogged terrain. Each span of pleasant and favorable weather is balanced out by one of harsh, dark and lifeless winter, threatening to sap the life out of your fragile biomes. Living in upstate New York as I do, I noticed no difference here from my daily life.

There’s a certain amount of stuff already placed when the level begins. Some basic solar energy, life support and living space. All buildings can be connected by tunnel-based roadways. Or, if you’re a dick, you can just connect every building to another, and make some poor bastard walk through a farm and a trading hub on his way to work at the geothermal plant.

It can all be boiled down to a pretty simple flow. You need more of a thing. Maybe it’s water, so you find the best place nearby to extract water. Or perhaps it’s food, so you find the best spot to plant whatever crop you need to grow (with the help of an actually pretty handy UI). Maybe it’s energy, so you either put a geothermal unit in a specific place, or place a solar panel literally anywhere. Is the thing you need to place too far away? Place another control point for your little helper drones, and increase the radius in which you can do your stuff-building work. 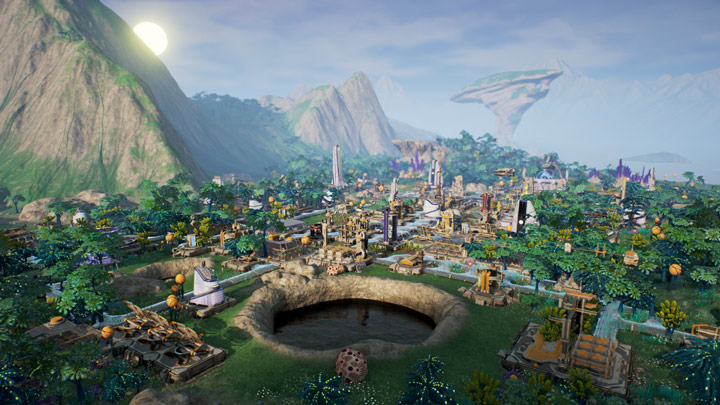 There are also missions. Oh man, oh man are there missions. As you play, officers from the greater colony still hanging out up in space will give you prompts. You can follow or ignore what they ask, but usually you’ll end up fulfilling their quests anyway. There are little bonus packs of some resource or another anytime you do it, and usually it’s just a reminder that, hey, you don’t have enough housing for this next batch of immigrants coming to your colony. You should probably get on that, bucko.

After a while, this whole system made me realize what might be my main issue with Aven Colony. There’s not really a lot of variety in terms of what your eventual goal is. There’s not much of a sense of variety when it comes to what you can shape your colony into. You’re shaping it into a colony that can keep its people alive, and not do the opposite of that. It would have been nice if I could do a little more to craft the place to feel like an actual town, instead of an extremely cluttered, extraterrestrial office park. Maybe if I could terraform or something.

It’s all in the brochure 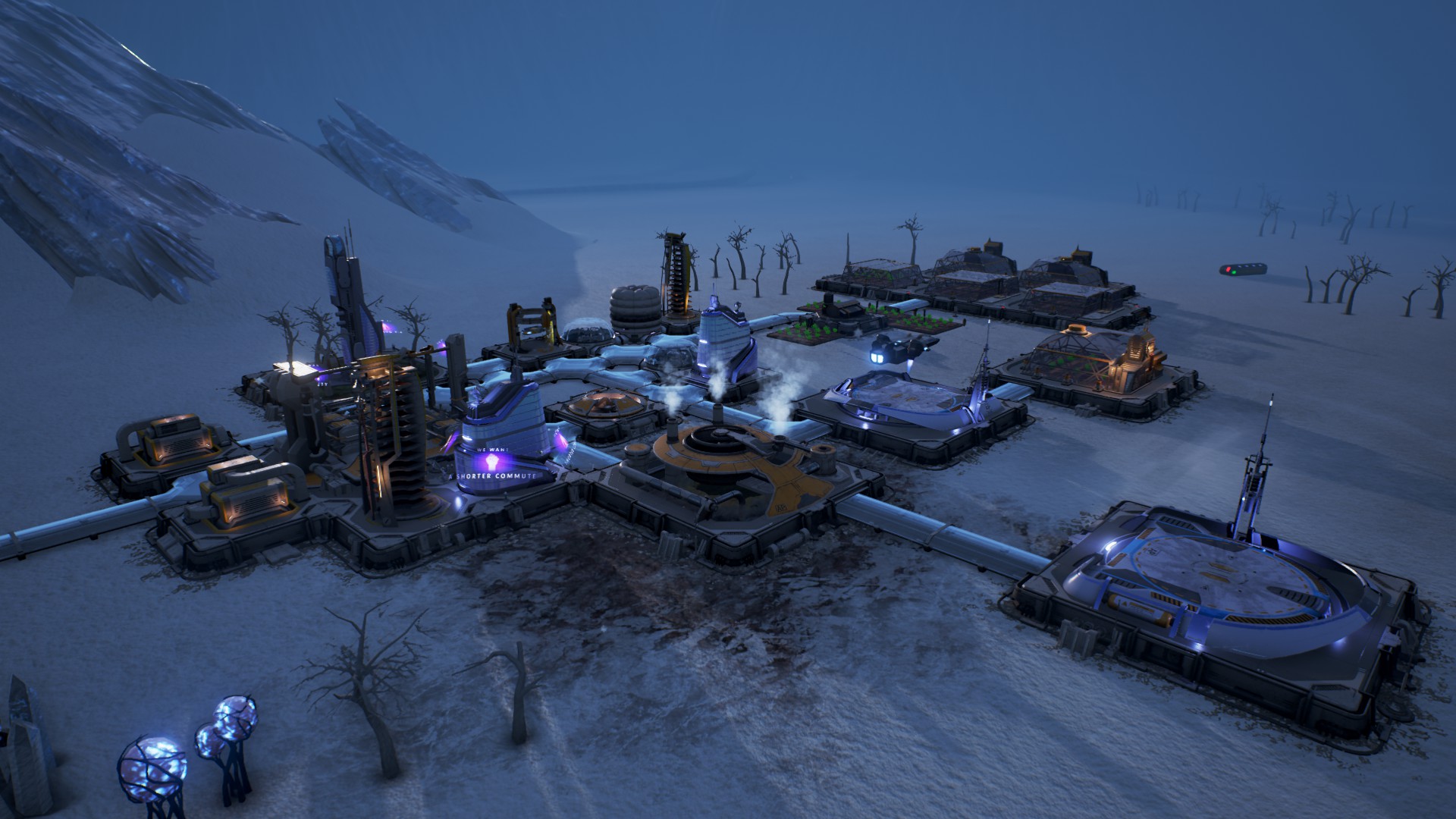 On the flipside, though, there is an absolute ton that Aven Colony does really well. As stated already, its interface works on a TV screen far better than most city builder-type games are able to manage. Menus are all well-organized, giving the whole UI the feeling of a well-organized desk to work from. Very managerial, very functional. I always recommend almost any game like this that I play be enjoyed on PC over the console versions. While I can’t exactly say that isn’t the case here, it is so by a much smaller margin.

And honestly, it is satisfying to watch your colony grow. It’s nice to watch those numbers go up; I think I am that kind of player, to some degree. I’m not going to tell you how many hours I spent with Cookie Clicker running in the background, but I’ll tell you it was a lot. Watching resources flourish, trades get made between the colony and those in space, and winters get survived through is all satisfying.

But it’s satisfying in the way that a 10-hour work day is. It’s satisfying; because you feel like you’ve accomplished something, but not because you’ve actually enjoyed the journey there. You’re satisfied because it’s over, more than anything. I never felt like I was getting much real feedback from my citizens. They shifted between being unhappy, and therefore a problem, and happy, and therefore forgettable. It would have been nice to get a little more out of my own effort. Not being able to make much of anything cooler than the concept of survival (which I guess is cool, if you’re into that sort of thing) is a huge damper.

Another foot in the space race


So there’s Aven Colony. The game is really well-designed, and has a few great scenarios, but they culminate in the exact same path. The colonies you will build will just feel really impersonal most of the time. There are some games that are fun, and there are some games that are fun after you’ve won. Aven Colony does a great job in the latter, but fails to breach the walls of the former.

Full disclosure: This review is based on a review copy of Aven Colony given to HeyPoorPlayer by the publisher.