Give in to the pressure. 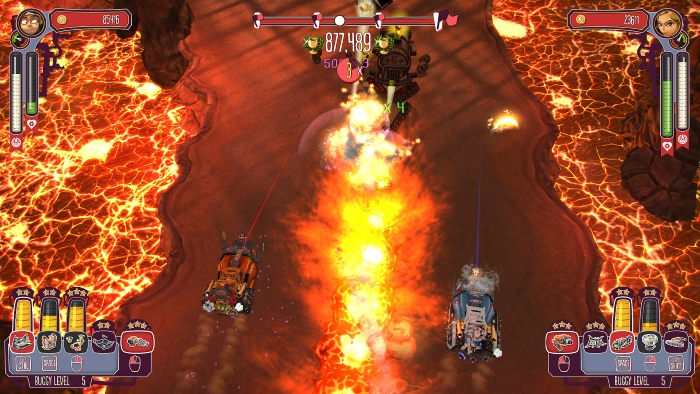 Let’s be frank. Game genres are becoming increasingly insufficient on their own terms and merits. We’re seeing more and more hybridization of game styles and mechanics, such as FPSes fused with roguelikes and platformers mixed with rhythm games. Naturally, some of these ideas work better than others, either by virtue of their compatibility or simply by the competence and execution of their developers. Fortunately, an attempt to fuse a shmup with simple racing and vehicular combat has resulted in the excellent Pressure Overdrive.

The game casts players in the role of Morgan, a young chap who finds that his water supply is being stolen by malevolent robots under the control of an evil count. The villain’s goal is to open up a luxurious bath house and charge obscene prices for attendees to take a dunk in some ill-gotten H2O. Despite the severity of the situation, Morgan resolves to win back his wonderful water with an astonishingly laid-back attitude. To this end he enlists the help of “La Resistance”, a comical liberation group who is easily the cheesiest parody of French culture and language this side of an Asterix comic.

Warning: contents may be pressurized 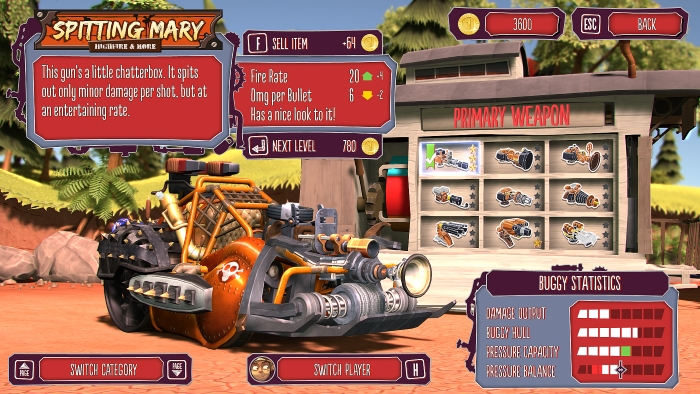 For those not in the know, Pressure Overdrive is an updated version of an earlier shooter/racer game by the same developer, simply titled Pressure, released way back in 2013. This Overdrive version is the definite edition of the game and includes many new bug fixes and updates. A mixture of old and new features are on offer here, including an “endless mode” for highscore and leaderboard chasers, as well a plethora of weapons, and some pretty slick multiplayer options to really round things off. And speaking of multiplayer, a rather neat feature is the ability for another player to join in at any time with the simple press of a button, meaning your mates can come and go with little consequence in the campaign. A really nice touch indeed, and one guaranteed to make this one of the finest couch multiplayer games we’ve seen in a long while.

Things start off mild enough, with a tutorial that eases players into things with slow enemies who don’t offer much resistance. Between levels, players are given a chance to visit the shop and upgrade their vehicles. And let it be known, there’s a considerable amount of choices on offer. Best of all, you’re encouraged to develop your own play style, with different upgrades offering distinct skills and abilities. Some are great with brute force, others are geared towards survival, and some even have effects in certain conditions, such as aerial shooting moves. And finally, one needs to take into account the various bosses they’re going to encounter. Oh, yeah: these are right brutes and will require some forethought to take down. They’re easily some of the most creative designs we’ve seen in a non-Sonic the Hedgehog game. 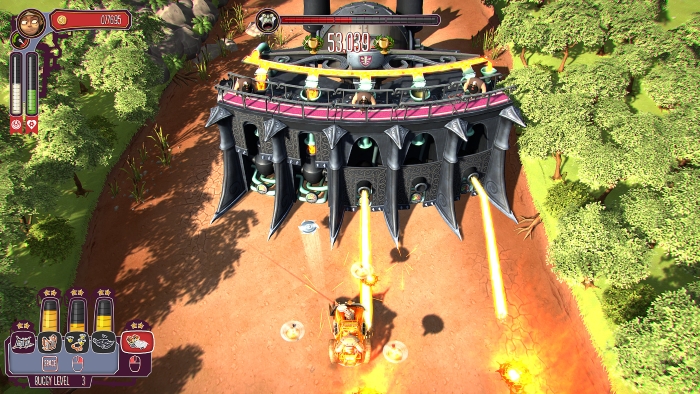 The main campaign itself offers a fair bit of a challenge, though it’s far from the most difficult game you’ll ever play. There’s a lot of high-speed antics mixed together with good, old-fashioned shooter action, and it plays really well thanks to the near-perfect, tight controls. It’s not a danmaku by any means; there aren’t legions of foes raining down death on the player. Instead, enemy encounters are smaller but tougher, and become especially sturdy as the campaign progresses.

Presentation-wise, there’s little to fault here. Graphics are clean, colorful, and very bright. The game employs a sort of CG look, with realistic textures juxtaposed to cartoonish character models and facial expressions. In various ways, you almost feel like you’re playing something from Pixar or Dreamworks. A sense of humor permeates the experience, with various caricatures at play, especially those of a particular French bent. On the audio side of things, sound effects are appropriately wacky and the music is fast-paced and filled with funk, if not particularly memorable. Overall it gets together to form a fun and gorgeous package that’ll appeal to serious players and graphic hounds alike.

Pressure Overdrive is thoroughly wacky, immensely fun, and offers a solid challenge. Through its combination of shooting mechanics and driving, it manages to come across as superb stress relief, especially if you decide to rope in a buddy for the ride. There’s a truly wonderful single-player campaign on offer, but more than anything, you’ll enjoy the multiplayer shenanigans. It comes highly recommended, and we suggest you drive over here right now to snatch a copy of your very own. A fine shot indeed.

Full disclosure: this review is based on a review key for Pressure Overdrive given to Hey Poor Player by the publisher.

Don't Lose Your Head     I feel like we've gotten to the point where consoles l[...]

The undead rise, The undead fall I can't even lie to you guys - I didn't really know muc[...]