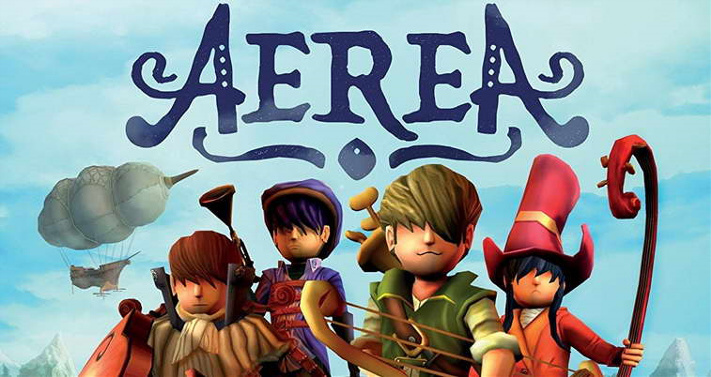 Sometimes you get a game with multiplayer and you get excited. You go, “oh boy, I can’t wait to recruit friends to have some lovely adventures,” or something to that effect. But when you get a game that isn’t good but has multiplayer, it becomes a problem. You have to act like some sort of crossroads demon. “Hey, kid, I’ll give you the best guitar skills in all the world, if you play a round of a mediocre action RPG that’s so easy and bland it makes vanilla ice cream look like escargot.” That’s how I felt trying to convince anyone to play AereA with me. I just wanted to review the thing. That shouldn’t have meant taking others down with me on this bland, bland road.

Aerea starts out with a character selection. You can choose one of four musical students and adventurers with whom to explore the land laid out before you. One of them clobbers enemies with the bow that goes along with his cello, and the other three…well, the other three all shoot things, in mostly the same way. Immediately, I had trouble differentiating between the three ranged characters. Hell, even their special circle attacks are the same. they all get a deflecting smashwave, while the cello guy gets a block. 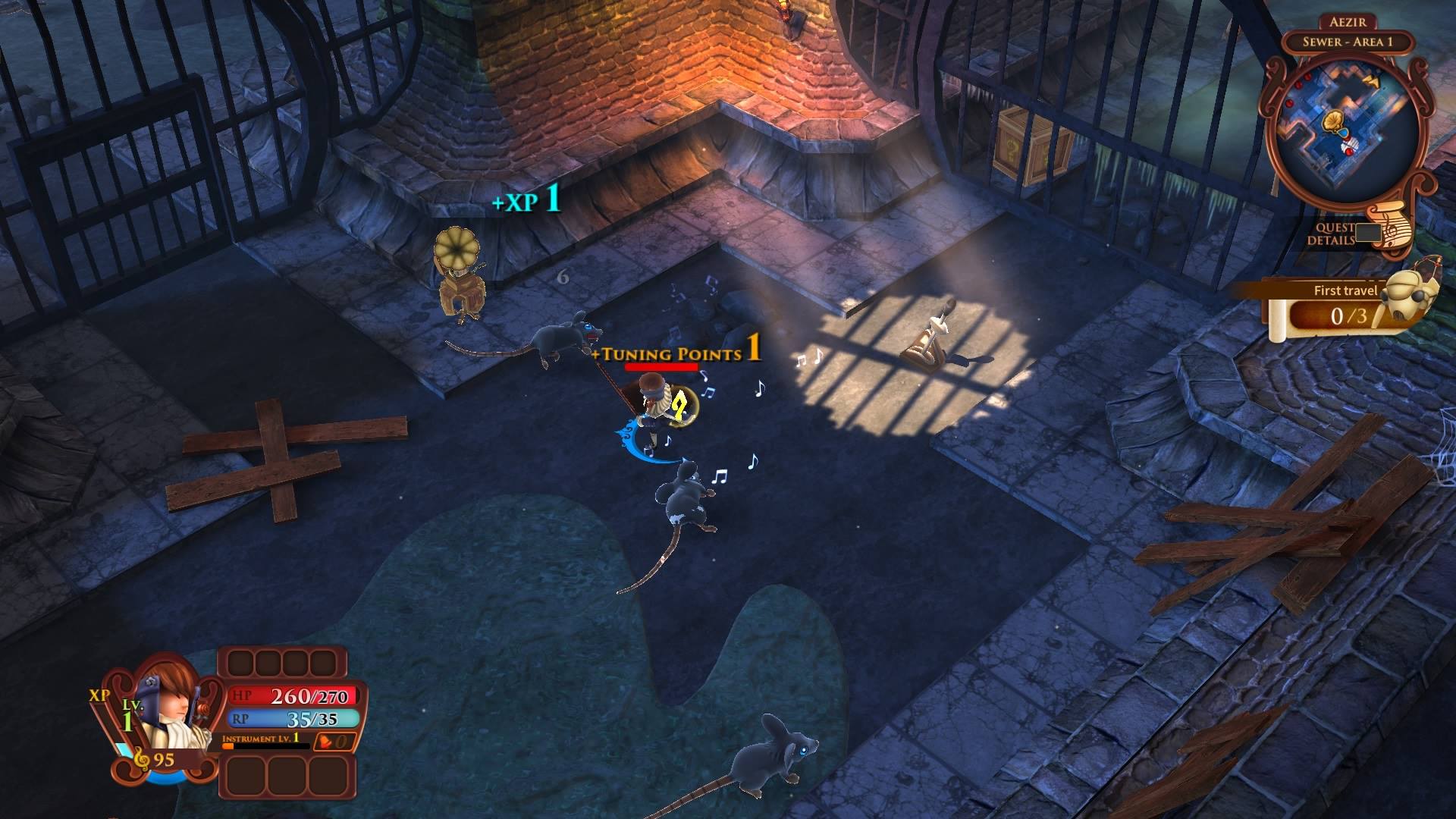 You’ve heard of walking through a tunnel, killing rats for exp…but have you ever thought about doing it with a classical instrument?

But on we go. You pick your adventurer(s) and are off, into a world where music is weaponized and used for all manner of purposes. You’ll explore forests, sewers, and more areas, all with the supposed flare of musical style.

Here’s the problem, though. Right from the word go, that idea of style is lazy to the point of obscenity. It only exists on the most surface of surface levels, really. You fight some evil cicadas, and hey, that’s cool; their bodies are shaped like maracas. Time to fight them by playing your instrument…which means either beating them with a bow or shooting some regular magic gun-type stuff at them. It feels less like the weapons being instruments means anything, and more like they were designed so that whatever art style was deemed appropriate could be smeared on later. 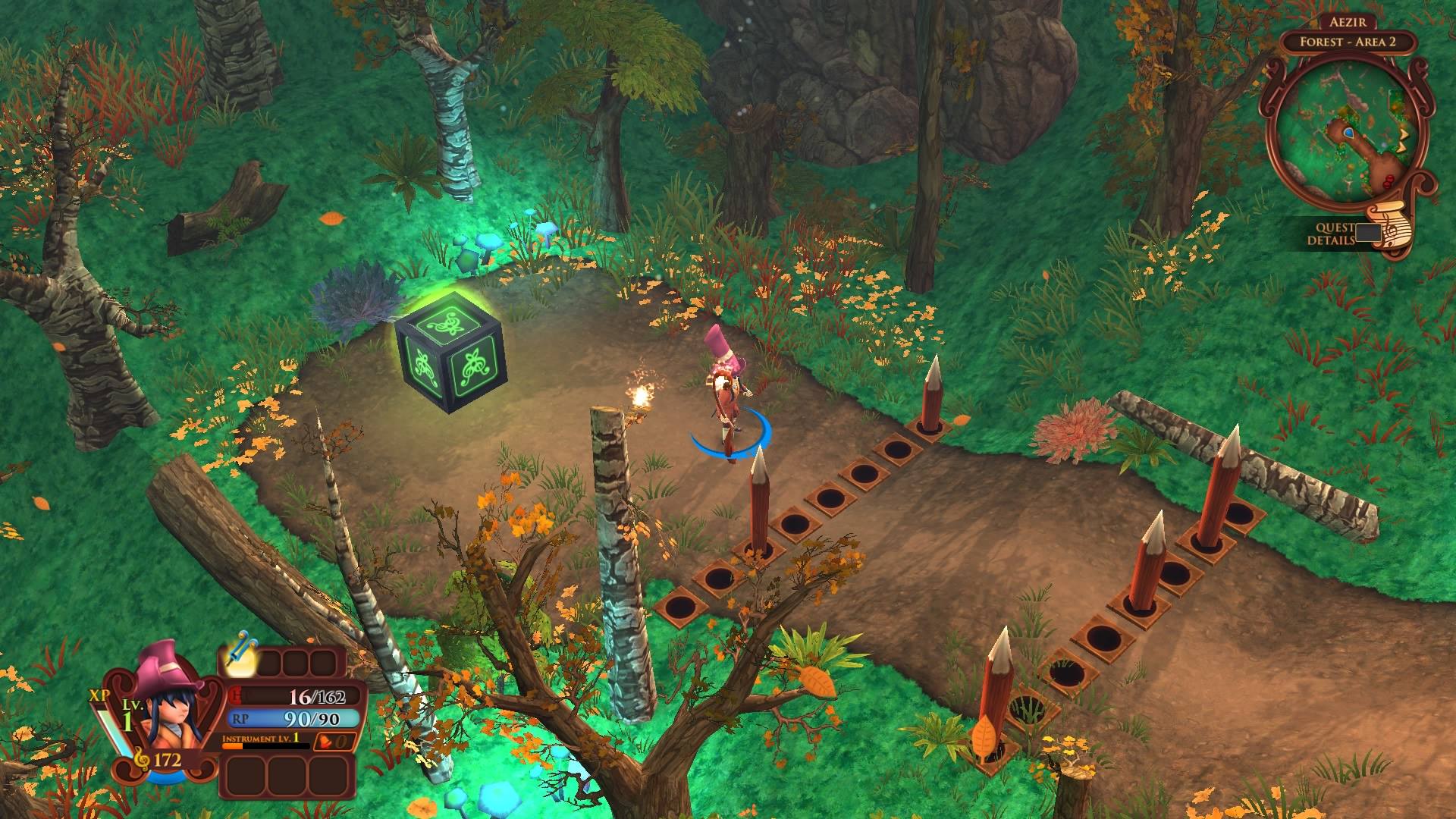 Because nothing inspires music like boxes. Boxes are my jam, my dude.

It’s true in other places, too. “See that,” the game will say, indicating a box on the ground. “That’s the essence of music! You have to return it to its proper place to continue!” Ah, you say. Essence of music sounds interesting. I wonder what it’ll do. Well, wonder for all you’ve got, because the essence of music is just a block. AereA puts fancy names and faces on very basic block-pushing puzzles, and even things like door switches, and pretends it’s done something unique. This would be fine if it were the window dressing around deeper uses of the musical theme. Regrettably, though, it doesn’t get better than this.

“Hey, is it just me, or did they play this song already?”

Not only is AereA unimaginative; it’s also boring. Basic attacks are complemented by some special moves that can grow in number and potency as characters are leveled up. This leads to a simple-but-acceptable combat system that is then marred by enemies that feel to barely be there. Unless a mission says to kill a certain number of them, there’s no real incentive to fight all that much. Most enemies can be taken down in a hit, or run away from just as easily. Even boss fights just feel bland. I took down the first two on my first try, without taking a single hit. 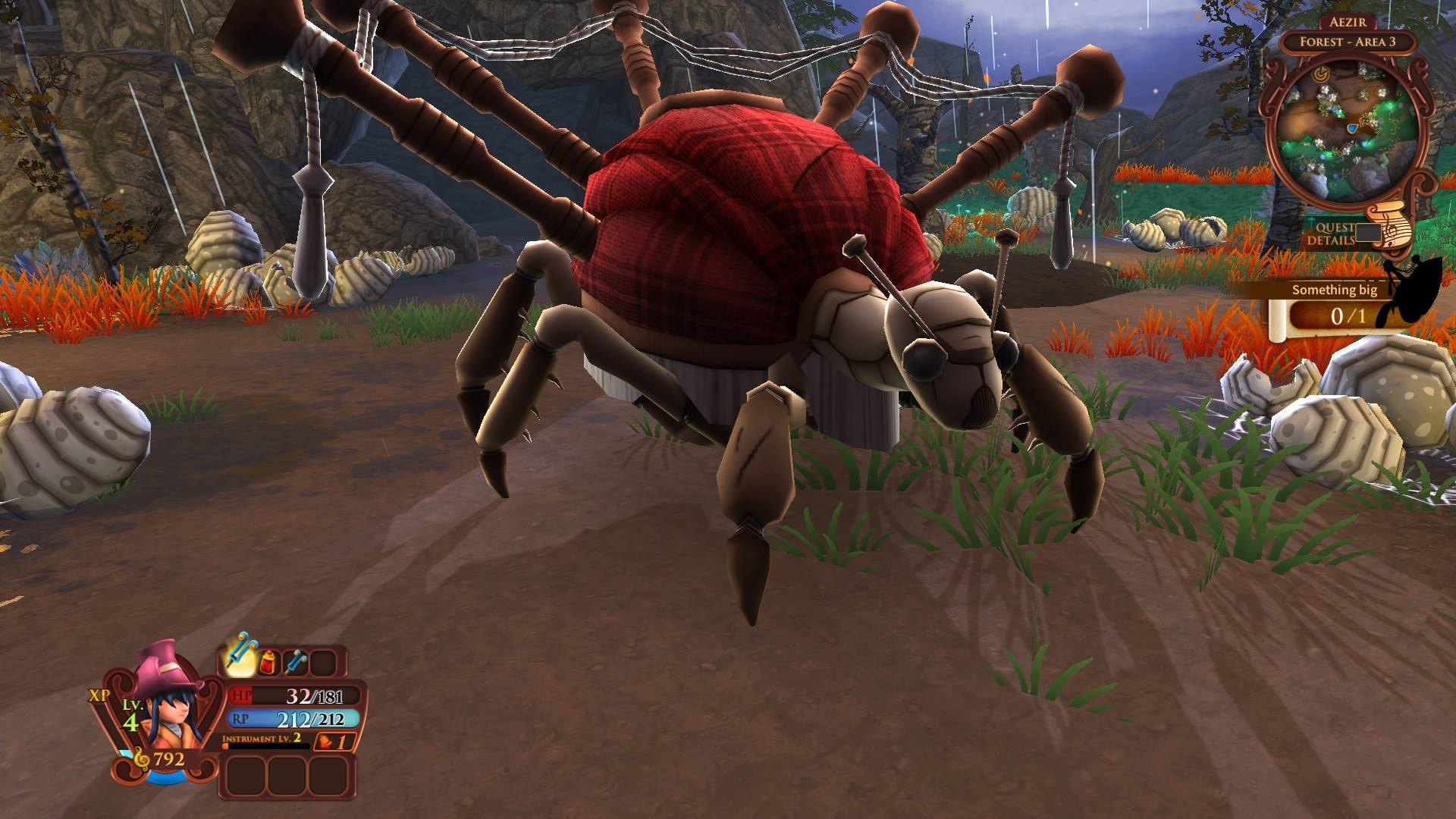 The combat is paired by missions that are just about as inventive as most modern country music. You drop into an area (hey, look, name puns), fight some enemies, find whatever object it is that you’re meant to find, and get your prodigal hiney out of dodge. If you should somehow die in combat (or by generic traps), that’s actually even better; once you’ve gotten The Thing That Needs Getting, there’s no penalty for just offing yourself, however, you feel like. It’s actually a quite effective fast travel method; too bad it cheapens the level design all the more.

Play it somewhere else

And just like that, I already feel like I’ve said all that can be said about AereA. It’s not particularly interesting. It has a nice soundtrack and a cool idea for an aesthetic, but makes absolutely no steps towards actually selling itself. I suppose I can appreciate the honesty there, though.

But that’s just the issue. You could boil down some of the essentials of a Diablo game, skin it right, and have this thing. And that’s what AereA feels like; like a generic model with a hasty and flimsy skin on it. It’s like finding a bootleg toy with flimsy decals that are peeling off at the edges, trying to hide the fact that what your confused grandmother took for a Power Ranger is actually just an old Batman figure with some lead-filled paint all over it. Maybe a bit closer to home, it’s the game equivalent of getting one of those acoustic guitars that’s all plastic on the back. It’s serviceable for giving your hands something to do, but try to take that thing on a gig and you’re just going to get laughed at.

Full disclosure: This review is based on a copy of AereA given to Hey Poor Player by the Publisher.