Ancient Amuletor has some bright ideas, but a criminally short campaign and lopsided challenge spoil the fun 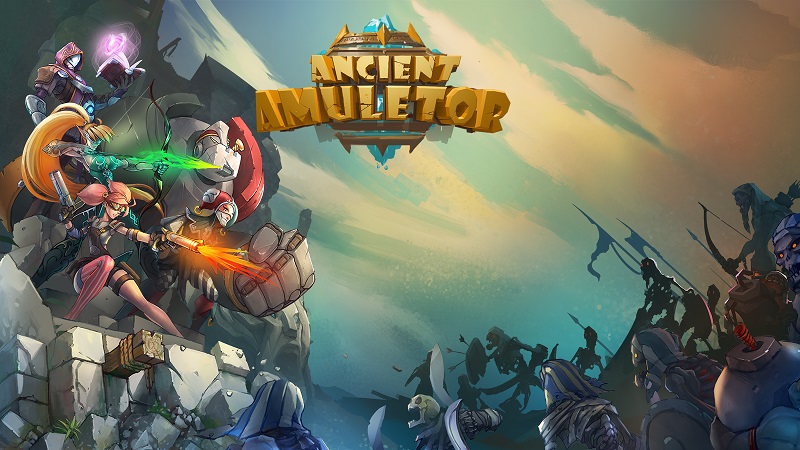 When it comes to the PlayStation VR, very few genres have been quite as well represented at the stationary shooter. This comes as no surprise, mind you.  After all, virtual reality is the perfect medium for getting behind the barrel of a wealth of weaponry and blasting baddies to bits – especially when combined with a nice pair of motion controllers to enhance the immersion. Ancient Amuletor, the latest release from Chinese studio TiGames, is the latest PSVR game to test the mettle of VR sharpshooters.

Make no mistake about it, this is more than just a re-skin of Pixel Gear or The Brookhaven Experiment. There’s more than enough fresh ideas at play here to separate this trigger-happy title from the myriad other shooters on Sony’s headset. For starters, the game successfully combines the DNA of both the shooter and tower defense genres to make the action feel fresh. And the class-based system that allows you to swap between four different heroes on the fly, each with their own unique methods of play, is exciting. However, its lean package and often uneven challenge make Ancient Amuletor feel a fleeting and often frustrating experience. 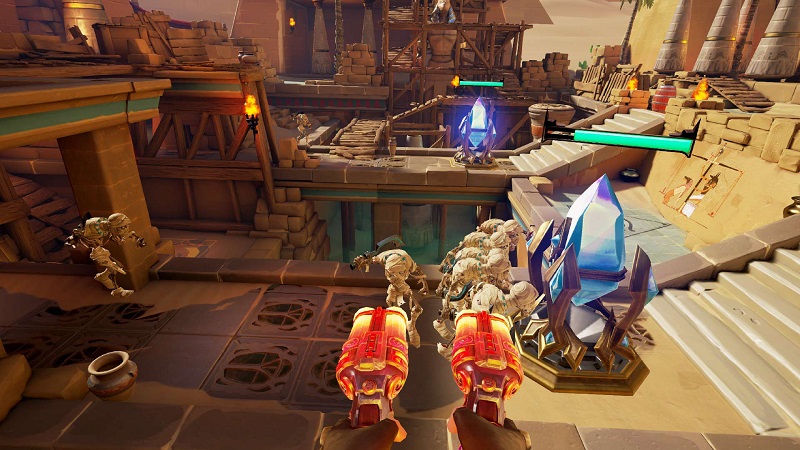 The premise of Ancient Amuletor is simple. After selecting your hero, you’re plopped onto a raging battlefield where you have to prevent waves of enemies from attacking several crystals scattered across the map. To keep the enemies at bay, you’ll need to warp from platform to platform, prioritizing which crystals to defend as waves of enemies become more intense and enemies more varied. If you manage to survive the final wave with at least one crystal intact, you’ll move on to battle a challenging boss encounter. However, if you fail to play defensively and all of your crystals are destroyed, you’ll be sent limping in shame back to wave number one.

Ancient Amuletor‘s greats strength is its fun, class-based hero system that makes it easy to find a style of play that you enjoy. The dual shotgun-toting Katie is perhaps the most straightforward to play as. While she doesn’t deal a ton of damage, her shotguns are easy to use, and can unload four shots before needing to be reloaded (which is as simple as flicking your wrist). The archer Lia may not have the shooting speed of Katie, but her arrows are more precise and deal more damage. The trade-off being you actually need nock and draw your arrows with every shot.

While Lia and Katie offer familiar styles of play, the two additional characters require a bit more skill to use effectively. Park is a puppeteer who can throw his puppet into the fray. Once deployed, you can use the motion controllers to swing each of his arms independently. His axe and war hammer are extremely powerful and can be invaluable when used in a choke point. The thing is, he has a lengthy cool-down, and once deployed you’re pretty much stuck in one spot, which makes far-away crystals easy pickings for your enemies. Finally, Harry the mage is the final hero of the bunch. He can lob magical projectiles from his spell book. Slow but powerful, he’s a solid addition to the cast once you get used to the arc of his throws.

Overall, each class is fun to use and serves a real purpose on the battlefield. You’ll need to come to grips with each of them and know when to take advantage of their unique abilities if you want to keep your crystals intact. 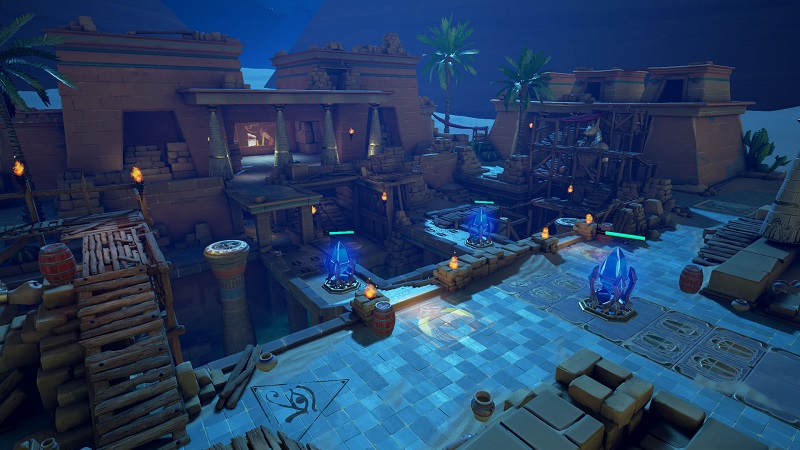 And trust me, keeping those rocks in one piece is not as easy as you’d think it’d be. Things can get out of control in no time. And before you know it, you’ll have half of your crystals under attack by swarms of enemies. Thankfully, each map is filled with various targets to shoot that trigger traps to help even the odds. These include explosive barrel catapults, swinging axes, and more. Additionally, you can collect power-ups to slow down the onslaught of crystal-crazed invaders or significantly upgrade your damage output.

You’ll need all the help you can get, too. Because even on its easier difficulties, Ancient Amuletor packs a serious challenge. In fact, toppling the game on its harder modes almost requires playing the game cooperatively with multiple players to help hold down specific crystals. I’m hardly a rookie when it comes to VR shooters, but I mean it when I say that going it alone on the harder difficulties seems nearly impossible. This uneven challenge is disappointing, especially when you consider just how hard it can be to find a full game to begin with.

Ancient Amuletor‘s biggest problems are visible before you even find yourself on the battlefield. To start, there are only two, two-part stages to choose from; one inspired by ancient Rome where you’ll battle skeletons, armored Centurians, archers; and an Egyptian-themed stage that offers exactly the same cast of enemies with the addition of mummies. There are two other stages marked “coming soon”, making it clear that you’re only getting half of what’s in store with your purchase. The game is less stingy when it comes to heroes. You can freely swap between four characters right out the gate, while two more are slated to be released as DLC at a later date. Make no mistake about it, this is one very bite-sized package.

When it comes to performance, Ancient Amuletor runs without a hitch. Playing the game on the PlayStation 4 Pro it’s hard not to appreciate the silky-smooth performance, vibrant visuals, and towering boss enemies. That’s not to say this is the most impressive looking game on the PSVR — honestly, it’s a far cry from it — but it’s easy on the eyes and performs like a champ, so no complaints there. I did find controller tracking to pop up occasionally though, causing my weapons to drift in one direction or the other, which usually happened at the absolute worst time. Though this is more than likely the fault of the PSVR’s single-camera setup than anything else.

In the end, Ancient Amuletor is a fun but criminally short experience. Within the span of an hour you can see everything the game’s four short levels have to offer. And while you can try to tackle the game with three other friends, there’s simply not enough here to hold your interest for multiple playthroughs. When the rest of the package eventually becomes unlocked via DLC, Ancient Amuletor may well be a fun genre-bending experience that’s worth adding to your PSVR library. But with so little content available at the time of this writing, the game’s $20 price tag is pretty hard to swallow.

Full disclosure: This review is based on a copy of Ancient Amuletor given to Hey Poor Player by the Publisher. 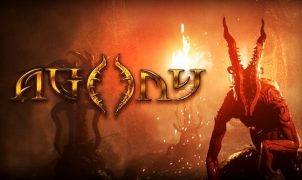