Save The Games. Save The World. 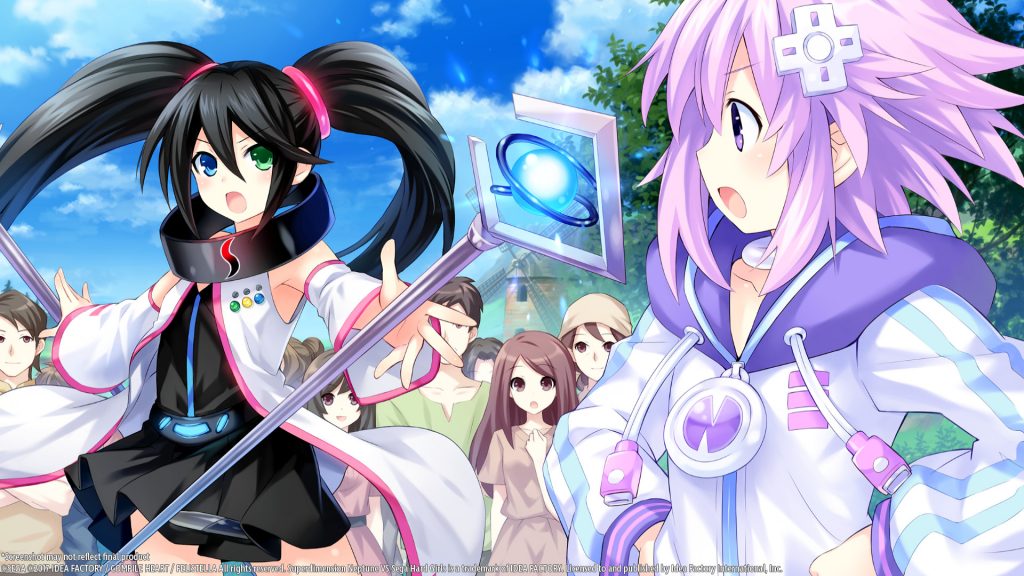 Now before we start, I want to say that I hardcore rep the Nepu Nepu cult. I love the Neptunia series and all their spin-off games, finding it to be one of the most charming video game franchises I have ever experienced. There’s a certain allure to seeing the video game industry personified as cute anime girls, and Superdimension Neptune Vs Sega Hard Girls certainly isn’t missing any of that charm. The self-aware humour, gorgeous visuals, and classic JRPG goodness is all present. However, it’s more or the less same goodness as other games within this strange universe. It this bad? No, not really, but I do wonder how long these games can keep doing this before diminishing returns kick in. But let’s get to the good stuff, starting with everyone’s favorite chuunibyou of the series: IF. 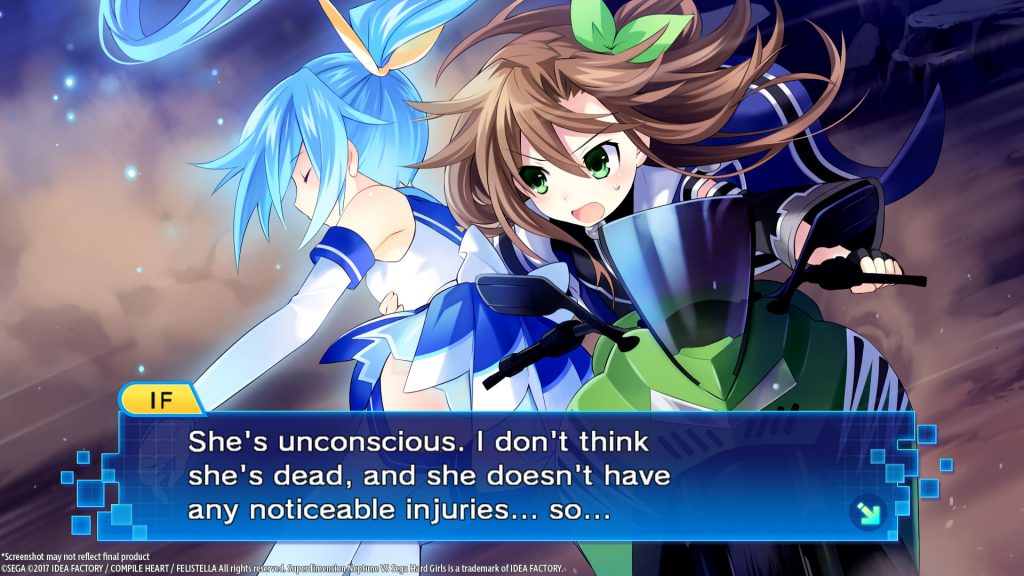 So in this hyper stylized anime universe you play as anthropomorphized versions of game consoles and companies, with the star this time being IF (Idea Factory personified). The setting for the start of the game is a post apocalyptic universe where IF rides a super edgelord motorcycle, looking for the library housing all the world’s information – because there is totally no cons to having the entire history of the world in one location. While riding her motorcycle, a blue haired girl falls out of the sky and IF takes her unconscious body to the library with her. At the library, IF meets Histoire, who is the librarian and fairy creature. After a series of shenanigans and exposition, it turns out that some evil force is erasing historical events and damaging the timeline. So now it is up to IF to save the timeline with a time machine now built into her motorcycle. Joining her on her adventure is the now conscious girl Segami – I wonder what game company she represents. So essentially two anime girls representing game companies have to time travel on a motorcycle to save the video game universe – yeah the plot is weird, even by Neptunia standards this plot is incredibly obscure. 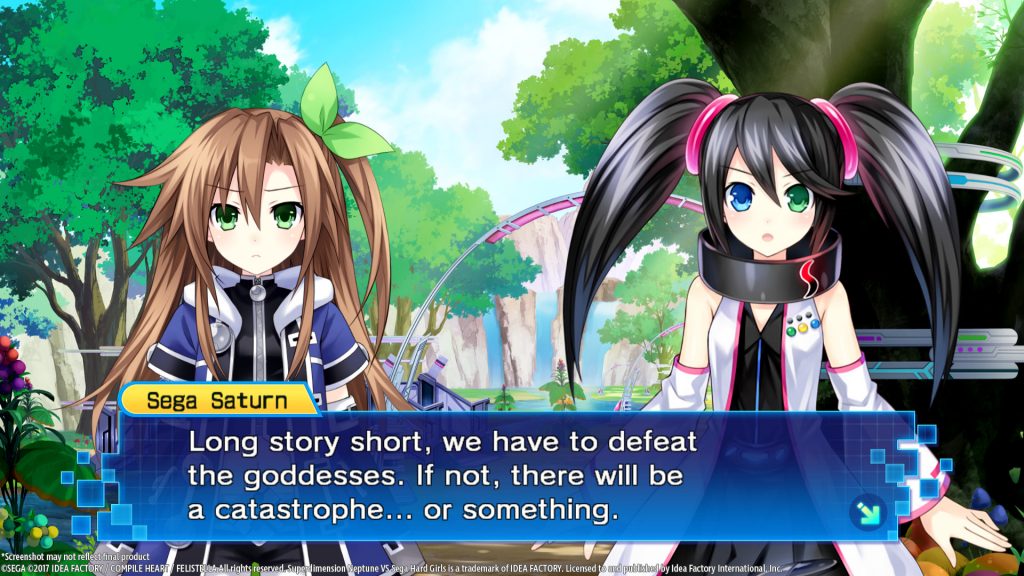 To be honest if you asked me what happened in the game past that insane premise, I’d have a hard time explaining. The Neptunia franchise has always been thick on dialogue, and I have no problem with this since the voice acting is great for the most part. However, it still doesn’t make the plot of the game any more clear or concise. A lot of the game is one crazy story beat after another, with anime tropes and video game references sprinkled in with no subtlety. And like other games in this series your enjoyment will be based on how much of the references and tropes you understand. Also it feels there is more instances of information overload than in an previous game in the franchise – which is a mazing considering this is Neptunia. If you are a fan, some your favorite characters from the previous games do make an appearance. So this game has an obscure plot, but even with the weird time travel gimmick this game does feel like familiar territory for better or worse. 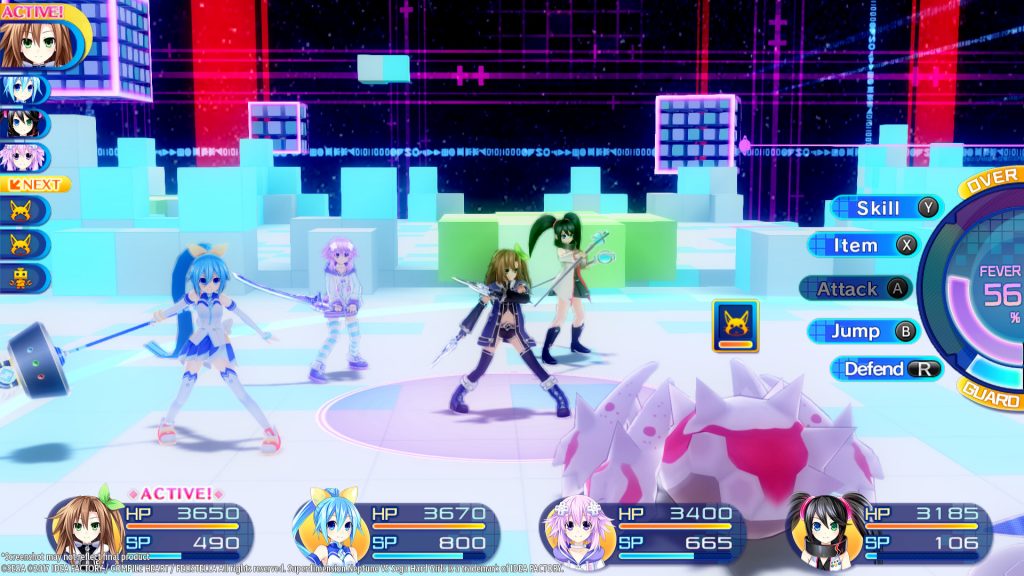 There is a library that houses all the world’s information – again totally not a terrible idea. The library serves as the main hub where you can choose story missions, shop, and other tasks. The real meat of the experience is the mission which function more or less like the instances in the Neptunia franchise. The game plays in a turn-based style, where you control character movement, then choose to whichever action you deem best. Characters turns take place in a fixed order based on stats, and positioning as well as timing matter. If you’ve never played a Neptunia game, the experience feels very similar to games like the Star Ocean or Tales game series. A feature that I greatly enjoyed from Hyperdimension Neptunia mk2 is the Lily Rank or the level of trust between characters. When you put party members close to each other in the formation menu you increase their Lily ranking, which gives you certain in-combat buffs. Other elements include the Action Gauge and the Fever Gauge, and they provide a lot of depth in when you should do actions or how to plan for later in the encounter. So all of this provides for a solid but familiar combat experience.

There are also welcomed additions to the way exploration in an instance can be done. IF can now climb, crawl through tight corridors, and other environmental actions. Unfortunately, this quasi-platforming aspect is used too sparingly. This brings up my biggest problem with the game’s design: it isn’t much different from other Neptunia games. This is a spin-off title, and it could have taken a different direction; it really didn’t have to play it so safe. I wouldn’t say the gameplay experience is bad, but if you aren’t already a fan of this style there’s nothing new added to convince you otherwise. However, if you are a fan of this formula and franchise you will definitely enjoy yourself, and the few new additions are more enjoyable than not. 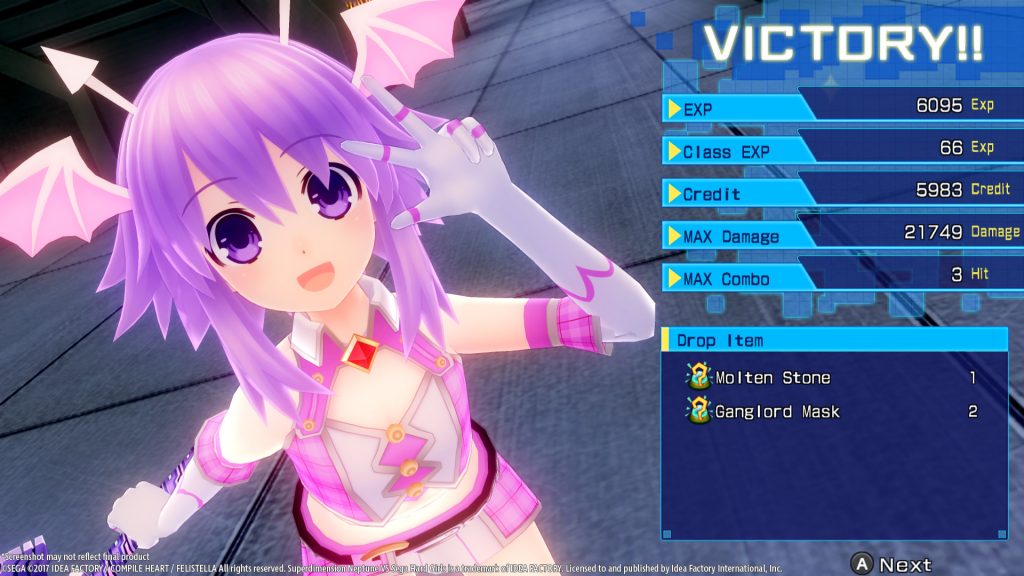 One of the big draws to this game and franchise as a whole is the art style and presentation as a whole. There is no character that doesn’t have a unique or charming design, and there is something fascinating about seeing Sega consoles as cute anime girls. If you aren’t into this sort of hyper-stylized anime style, I would still say this game is a visual treat. Even the in-game models do a damn good job of representing the character’s art, even if it is a little skewed in 3D. I can also safely say that this game has the best UI design in the entire franchise. The UI as a whole has a style very reminiscent of other games in the franchise, but has much less clutter and information overlord. It is colorful and bright while having enough information to be helpful. Unfortunately the designs on the environments (which have always been the weakest part of the franchise) is still pretty minimal. What makes matters worse is that they feel recycled from previous games, which is pretty disappointing. So visually it’s a pretty solid experience, and it’s perfectly complimented by the game’s best audio feature – the voice acting.

I always tend to play these games with the Japanese voice acting. No hate to the English VAs; it’s just a preference. Like all the other Neptunia games, the voice acting for both the Japanese and English voices is fantastic. All the voice acting compliments the character’s personalities very well, and it is nice to hear the talent of veterans like Rie Tanaka. All complimented by a score that know when to switch fluffy J-Pop and high octane techno. The music, while similar to past iterations, feels like it was produced with a higher sense of music production. This makes already catchy jams more clear and sonically interesting.

Superdimension Neptune Vs Sega Hard Girls is obviously made for fans, and this is probably the most well produced Neptunia game in quite a while. It has its positives, but if you aren’t already a fan there is very little reason to pick this up. I will say though, that this is a decent starting point if you are interested in the franchise, and it’s a fairly good deal for how much it costs. So even though the timeline has changed, a lot of the game’s elements haven’t from previous titles. But if you like this franchise or cute anime girls in general – what are you waiting for?

Full disclosure: This review is based on a review copy of Superdimension Neptune VS Sega Hard Girls given to HeyPoorPlayer by the publisher.