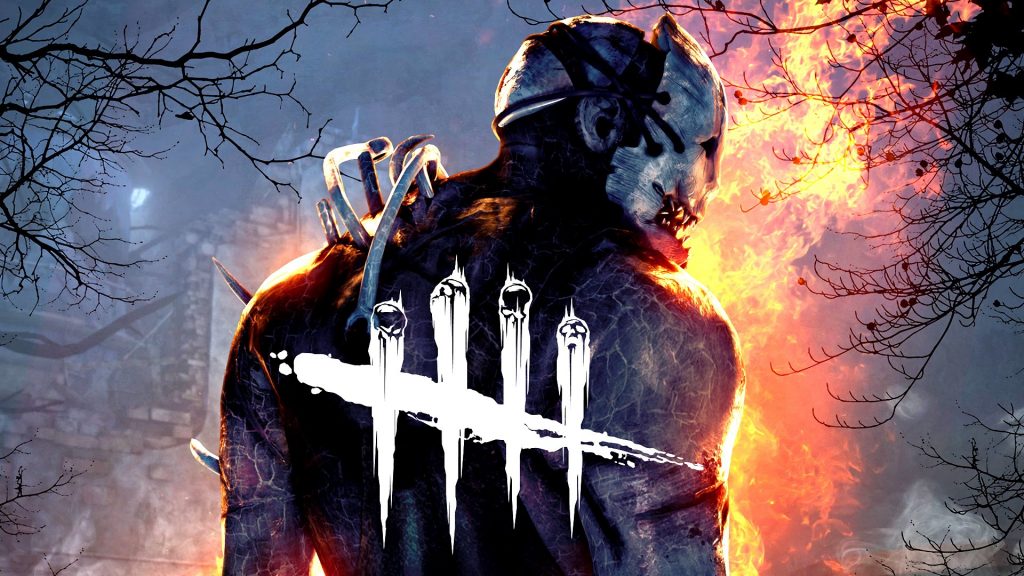 Throughout this review you’re most likely going to see a few examples where I compare developer Behaviour Interactive’s Dead by Daylight to the recently released Friday the 13th: The Game. You can’t deny that the two games are eerily similar; one player takes control of a killer and they stalk several other players who are attempting to survive, or in Dead by Daylight’s case, escape. The only reason I bring this up is to get the apology out of the way that I am comparing the two games; because even though they seem similar in description, each game has numerous subtle mechanics that differentiate them. But, since video game reviews are oftentimes comparing one game against hundreds of other games, it’s just 2nd nature for me as a reviewer to bring pit both of these games against one another.

So to get it out of the way, just like Friday the 13th: The Game, you can play as the killer or survivor in Dead by Daylight. But, honestly, that’s where the gameplay comparisons end. Unlike Friday the 13th: The Game, the survivors in Dead By Daylight only have one option when it comes to “winning”. Escape. That’s all you have to do. Sounds easy enough, right? It’s not. Out of the hundreds of games that I’ve played I’ve only managed to escape one time, and that was only because the person who was playing the killer was letting me escape for some unknown reason. This is an online only game mind you, so this type of thing happens more often than I would like.

“So, how do you escape?” you might be asking. As a survivor, you and 3 other players must repair five generators, which in turn powers a switch to open a door to escape the map. To start off each game you and three other players will be placed at random spots of a procedurally generated map called a realm. These realms have all kinds of different settings. You’ll find yourself in cornfields, dilapidated hospitals, junkyards; any location that you’ve probably seen in your favorite horror film. Escape the realm and you live to see another day. Get caught by the killer and become a sacrifice to the Entity (more on him later). 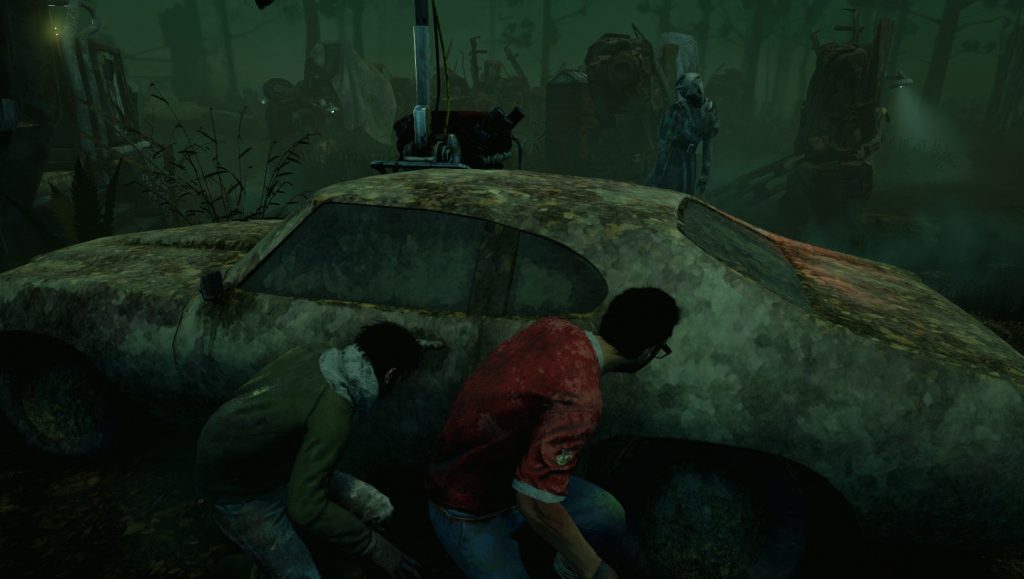 Jesus, Larry. Did you just fart?

Depending on where you start off on the map will usually determine how long you will survive, which is a bummer. I’ve started off by myself; without any of the other players in sight. I’ve started literally in between two other survivors, to the point where we were all touching shoulders. And more times than I can count, I’ve started off just a hop, skip, and a jump away from the killer. Starting off next to the killer meant sudden death 99% of the time, but thankfully, exiting the match after death didn’t result in me losing out on XP. Unlike Friday the 13th: The Game, the player is not required to spectate the entire match in order to get credit for playing. If you die, just exit and jump into another lobby. It’s as easy as that. Gun Media should take note here and include this option in Friday the 13th: The Game.

If you happened to find yourself in a good starting point you’re going to have a hell of a lot of fun. Dead by Daylight, when working properly, has created the some of the most tense situations that I’ve ever experienced in a video game. This is mainly because of how well all of the game’s components work with each other. For example, let me walk you through what will happen in every match.  As a survivor you’ll start off running (or creeping) around the map until you locate a generator.  Stumbling upon a broken generator will give the player an option of holding down a trigger button to begin the repair. A status bar will begin to show your progress, but repairing the generator requires a bit more than just holding a button down. During the repair a dial will suddenly appear on the screen and it’s the player’s responsibility to stop the dial at the right time. Screw up and the generator will explode and alert the killer of your location. At the same time the killer may be murdering a survivor so he must make a decision to finish killing off his prey, or investigate your mishap before you have time to start the repair again. It’s a simple premise but works flawlessly, but then again, it only works if all the players and killer start off in the realm at fair locations. 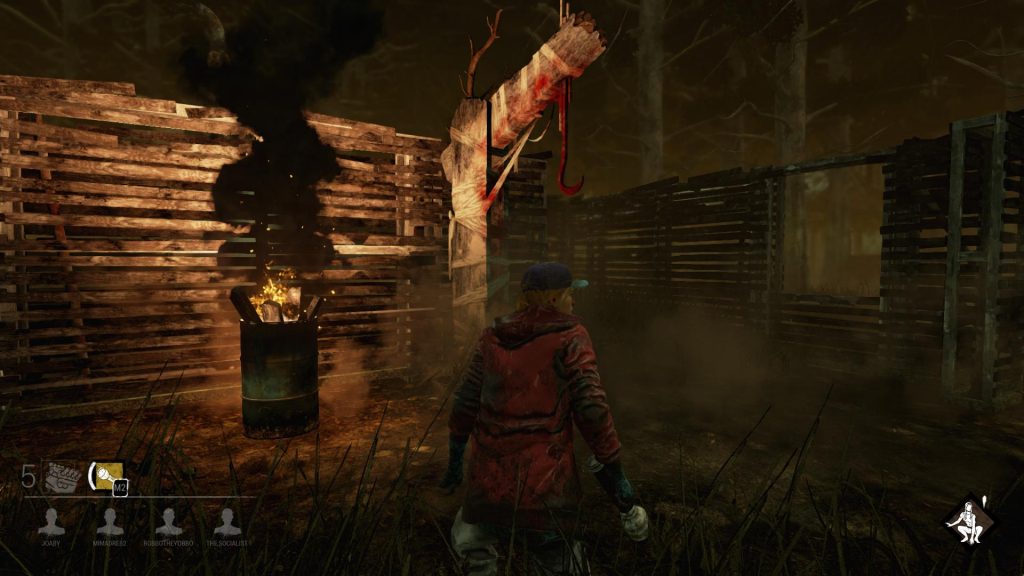 Being the killer in Dead by Daylight has its high points, but overall was underwhelming. I just didn’t have much fun chasing around the survivors and became bored after just a few play sessions. You only have one goal and that’s to kill everyone, but the killing wasn’t stylish enough to keep me entertained. The core gameplay is chasing a player and stomping pallets that the player has pushed down to impede your progress. If you do manage to catch up, and you will because the killer is always faster than the survivors, it’s just hacking and slashing until the player  can’t run anymore. Once they’re down you must place them on a meat hook, a’la Leatherface in The Texas Chainsaw Massacre, and wait for The Entity to accept your sacrifice. It’s slow and boring up until here, but once the player is hooked, that is where the decision-making and fun begins.

Like being a survivor, the killer has a few decisions to make during the match, the most important being deciding when to kill his prey. Just hooking a survivor doesn’t mean they’re dead and out of the game. The killer must wait for The Entity to manifest and accept the sacrifice. A few situations can come out of this, the main one being that other survivors can unhook the player who is to be sacrificed, making all of the killer’s hard work mean nothing. Of course, the killer can just hang out until The Entity manifests, but that takes a lot of time and during that process the other players are running around the realm fixing generators. The best option that I’ve found is setting bear traps around the to-be sacrificed and hoping that anybody who wants to be a hero gets caught. But this only works on players who aren’t paying attention to their surroundings. Again, all of the game’s mechanics work so well with each other and because of this, the tense situations really make the game a lot of fun. I just happened to have a lot more fun being a survivor considering that there is a whole lot more to do. 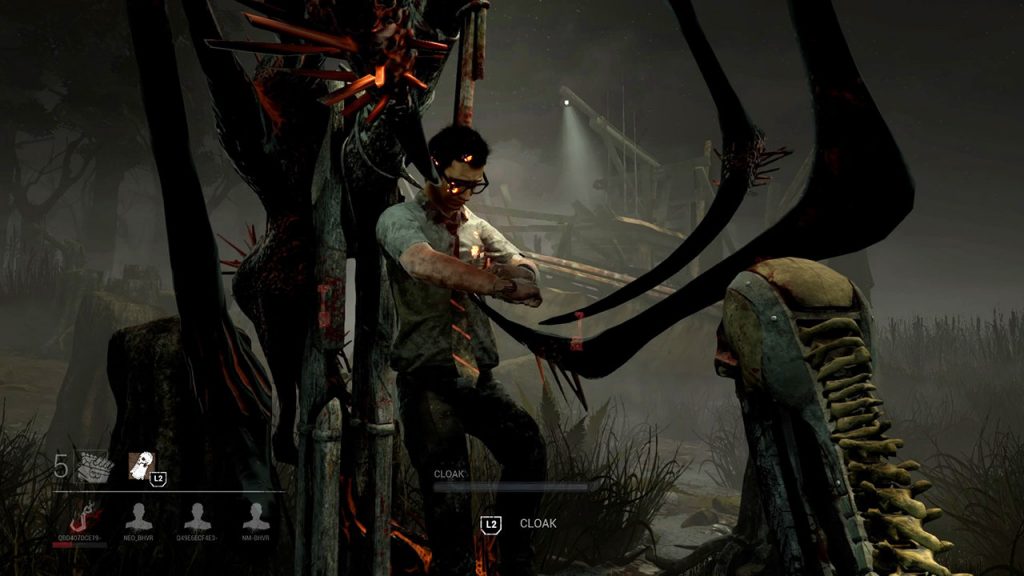 My Family Has Always Been in Meat

To keep players coming back for more is a perk system that works extremely well. During matches all players involved will accrue “blood points” by completing certain actions, such as fixing a generator if you’re a survivor or destroying a pallet if you’re the killer. These blood points can be used to put towards perks in a perk web that is procedurally generated. The generated perk system in place made each of my survivors have different abilities; begging me to keep playing since every character I was leveling up had some major differences. Thankfully, the blood points that are awarded seem to be given in abundance, making leveling up my survivor not feel like a chore. The perk web works nicely, and rewards both survivors and killers just the right amount of enhancements to keep them playing.

One thing that Dead by Daylight does extremely well is build a story around the survivors and the killers. The survivor backgrounds are all interesting in their own right, but developer Behaviour Interactive got really creative while fleshing out the killer’s backgrounds. Every one of them would fit right into an 80’s slasher film, and interestingly enough, some of their backgrounds had me feeling bad for them. To be honest, they all look goofy in-game, but knowing the story behind the killers helped increase the intensity when being chased down by them. Since the game offer’s very little in the way of cut scenes, I’d recommend reading all of the character bio’s before playing Dead by Daylight. It really did help me experience the game the way, I believe, the developer intended me to.

You and Your Friends are Dead

All of these tense situations I’ve been describing, although fun, did not instill fear in myself or anyone else on my friends list that I was playing the game with. This is mainly because Dead by Daylight’s graphics are too cartoony for their own right. The killers all look like confused dirty rednecks, or goopy tired ghosts. It’s comical to watch them chase a fellow survivor around while hunched over holding a large weapon that is too heavy for them to carry. The chainsaw killer looks completely ridiculous when waving his chainsaw around in mid-air hoping to hit someone. The noises they make while stalking their prey are just plain laughable, and  annoying in a way. There really isn’t much in the way of music or sound effects in the game besides a heartbeat that alerts survivors that the killer is near. I was also surprised to learn that Dead by Daylight does not support in-game chat. It would have been nice to plan with the other survivors, and I hope this gets added in a future update. Both graphically and sound-wise, Dead by Daylight leaves much to be desired.

If I had a choice between playing Dead by Daylight or Friday the 13th: The Game, I really would have a hard time deciding between the two. Both are fun in their own right, and for someone who usually doesn’t play online games, I’ve found myself sinking several hours into each one of them (not just for review purposes). If it came down to deciding on a survivor-only game I’d have to go with Dead by Daylight, but if there was a game where I could only be a killer, it’ll have to be Friday the 13th: The Game. Either way, both games are great and having the option to choose between the two makes me a happy gamer!

Full disclosure: This review is based on a PlayStation 4 review copy of Dead by Daylight given to HeyPoorPlayer by the publisher. 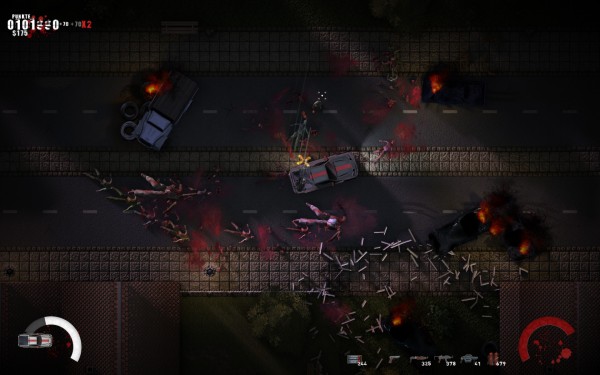